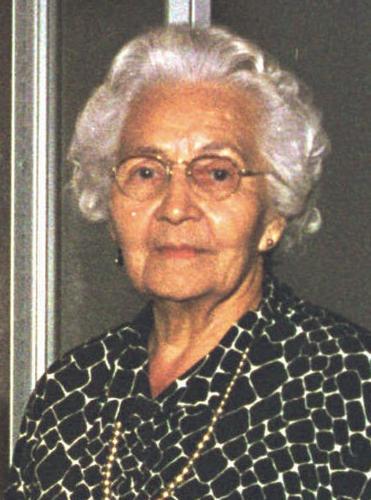 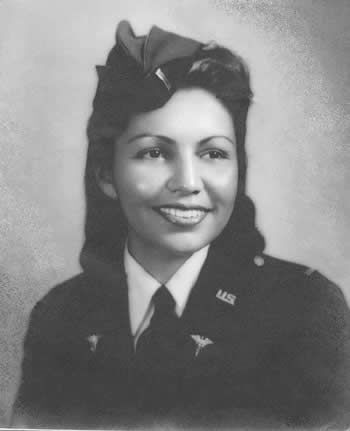 Marcella LeBeau in 1944 while serving in the Army Nurse Corps during World War II.

Marcella LeBeau, who was inducted into the National Native American Hall of Fame this month, died Sunday.

Being inducted into the NNAHF capped a lifetime of accomplishments for LeBeau. A member of the Two Kettle Band of the Cheyenne River Sioux Tribe, LeBeau was a decorated World War II veteran who advocated for the health and rights of Native Americans.

LeBeau, of Eagle Butte, celebrated her 102nd birthday on Oct. 12. She traveled to Oklahoma with her daughter, Gerri LeBeau, and granddaughter Johanna Farmer to attend the NNAHF induction ceremony on Nov. 6.

“It was a great honor for her. She wasn’t expecting it,” said Bonnie LeBeau, Marcella’s granddaughter. “She’s had so many honors that it was a good fit.”

LeBeau — Wigmuke Waste' Win (Pretty Rainbow Woman) — was born in 1919 in Promise, S.D. She earned a diploma in nursing at St. Mary’s Hospital in Pierre in 1942. In 1943, she enlisted in the Army Nurse Corps and became a combat nurse during World War II.

In June 2004, she was chosen as one of the 100 United States World War II veterans to receive the French Legion of Honor medal. LeBeau traveled to France to receive that medal. She also served on the front lines during the Battle of the Bulge in Belgium and received a medal of honor from that nation. In 2019, LeBeau was featured in “Angels in Our Midst,” a documentary about World War II American nurses who participated in the D-Day Invasion and the European Theater.

After World War II, LeBeau returned to South Dakota. She spent 31 years working as a nurse and in other capacities for Indian Health Service on the Cheyenne River Sioux reservation, retiring as the director of nursing. She also served on the Cheyenne River Sioux Tribal Council from 1991 to 1995. LeBeau is a founding member of the North American Indian Women’s Association.

In 2006, LeBeau was inducted into the South Dakota Hall of Fame. In 2018, she received an honorary doctorate degree in public service from South Dakota State University. She also received the Women in History Award in 2016 from the Spirit of the Prairie Chapter of the Daughters of the American Revolution, and in 2020, LeBeau was given a Leadership Award from the National Congress of American Indians.

In 2020, as part of its commemoration of the 19th Amendment's 100th anniversary, USA Today named LeBeau one of the most influential women of the century.

LeBeau’s advocacy for Native American's rights and health continued through her lifetime. Last year, LeBeau wrote a column urging Gov. Kristi Noem to rethink her stance on tribal public health checkpoints. Noem said the checkpoints, which had been set up as a protective measure against COVID-19, were illegal.

Bonnie LeBeau said her grandmother leaves behind a legacy of dignity.

“She was a very dignified woman and she raised us to speak our mind and stand up for what we felt was right,” Bonnie said. “My favorite quote from her would be, ‘If you can’t be who you are, then who are you?’ It speaks on so many levels. If I can’t be Native American, who am I? Let people be who they are and accept them for that.”

Marcella LeBeau in 1944 while serving in the Army Nurse Corps during World War II.