This architectural rendering shows the more than $25 million expansion Cadillac Jack's plans to its hotel and casino in Deadwood. 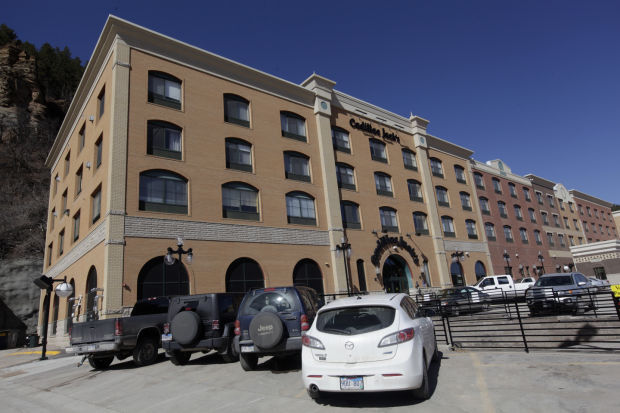 Cadillac Jack's plans a more than $25 million expansion of its hotel and casino in Deadwood. The city approved $2.8 million in tax increment financing for the project.

DEADWOOD | The second major expansion of Cadillac Jack's Gaming Resort, pegged at $25 million to $29 million, cleared its first hurdle last week, and Deadwood’s mayor said it could cause other hotel operators to “up their game.”

The commission awarded RCS Construction of Rapid City a $3.1 million contract for improvements that will include replacing a water main, upgrading sewers and storm sewers, a new sidewalk, curb and gutter, a light-activated crosswalk and a new pedestrian bridge spanning Whitewood Creek, according to city planner Bob Nelson Jr.

Through the TIF, the city will cover $2 million of the total costs with Liv Hospitality, owners of Cadillac Jack's, paying the rest, Nelson explained. The city investment will be recouped over time through the owner’s property tax payments, he said.

“All of the public infrastructure improvements were planned for the capital improvement program in fiscal 2018,” Nelson said Tuesday. “Essentially, this takes it off the city budget and places it on the property taxes of Cadillac Jack's. We’ll still be doing Lower Main Street work in 2018; we just won’t have to do that portion of it.”

Caleb Arceneaux, chief executive officer of Liv Hospitality, which owns and operates Cadillac Jack's and nine other hotels in the Black Hills,  said Wednesday that the expansion signifies his company’s confidence in the former gold camp’s future.

The new hotel, to be built south of the existing Cadillac Jack's hotel, restaurant and gaming complex, will feature an underground parking garage with more than 130 stalls, a ground level consisting of gambling space and three or four new food and beverage establishments, a spacious second-floor lobby, and 108 guest rooms on the second, third and fourth floors, Arceneaux explained.

“Gaming consumers' tastes are changing,” he said. “They want a more impactful experience that creates memories, not just a slot machine. We’re allocating much of the main floor space to food and beverage and entertainment outlets that will be very appealing and very unique to Deadwood.”

Liv Hospitality already has engaged Wisconsin-based Consolidated Construction to build the structure, and Arceneaux said he expected the company would hire several local subcontractors. The new hotel is expected to open in May 2018, depending on weather, Arceneaux noted.

The hospitality company opened Cadillac Jack's in 2002 with 103 rooms and suites, the Brown Rock Sports Café, bars, a pool and a spacious casino. In 2013, city records show, the company invested $13.4 million in the adjacent Springhill Suites by Marriott, which opened with four floors and 78 guest suites.

Work on the initial phase of infrastructure improvements probably will begin next month and be completed in six months, Nelson said. The city anticipates "limited disruption" to traffic on U.S. Highway 14A/85 during the construction phase, as most of the work will take place off the roadway, he said. However, one lane may be closed for short periods as the work progresses.

Mayor Chuck Turbiville pointed to the planned expansion as another in a series of private sector investments that show Deadwood is still growing. Other Main Street projects include renovations underway at Berg Jewelry & Gifts and Harley-Davidson’s recent purchase of the former Frontier Club, now being renovated as retail space.

“Deadwood hasn’t stopped building or stopped growing, nor do I think it will,” Turbiville said. “There will always be opportunities for new and existing businesses in this community.”

The mayor predicted the expanded hotel and gaming complex may change the way some lodging proprietors operate in the years to come.

“Some will look at it as additional competition, but it’s a notification to everyone to be more competitive, to take a hard look at their businesses and what they are providing,” Turbiville said. “Some may realize it’s time to up their game.”

Your Two Cents for Sept. 17

Substitute teachers are essential workers. They are not being compensated appropriately for the degree of responsibility they have for the cla…

This architectural rendering shows the more than $25 million expansion Cadillac Jack's plans to its hotel and casino in Deadwood.

Cadillac Jack's plans a more than $25 million expansion of its hotel and casino in Deadwood. The city approved $2.8 million in tax increment financing for the project.