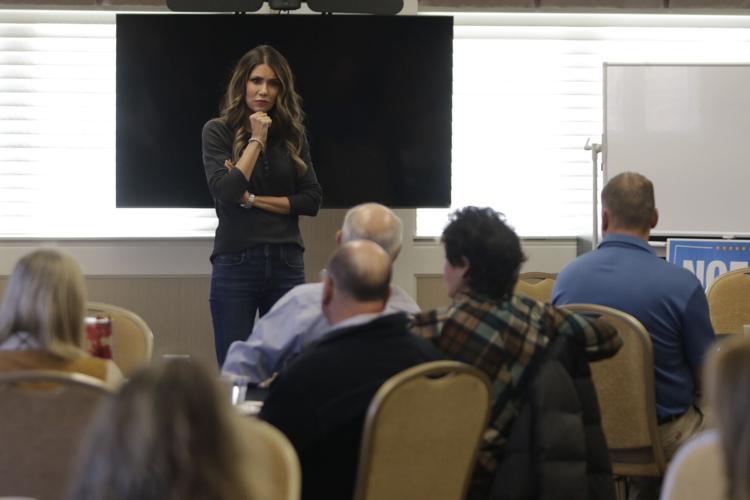 South Dakota Gov. Kristi Noem listens to a group of constituents during a meeting Thursday morning at the Hotel Alex Johnson in Rapid City. 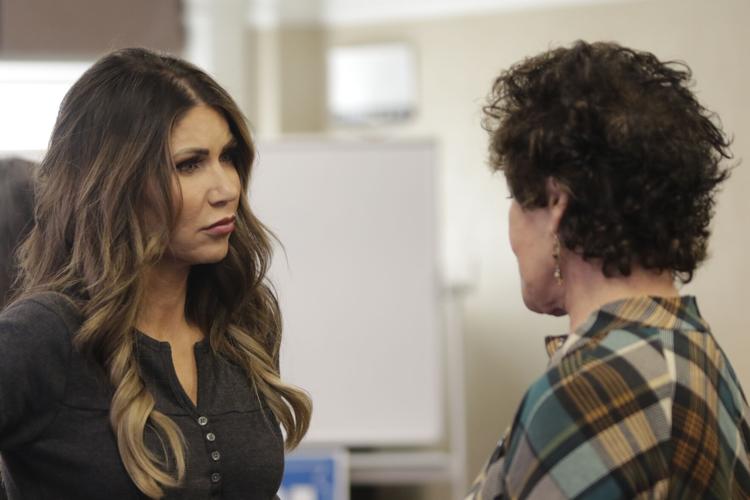 South Dakota Gov. Kristi Noem, left, talks with a constituent during a meeting Thursday morning at the Hotel Alex Johnson in Rapid City.

Election Day is less than two weeks away, and Republican Gov. Kristi Noem made several stops in the Black Hills Wednesday and Thursday as she seeks a second term.

Noem met with approximately 20 constituents Thursday morning at the Hotel Alex Johnson in Rapid City in what was billed as a "town hall" by her campaign, but was actually an invitation-only question-and-answer session that lasted just under an hour.

Noem, who has only participated in one debate with Democrat Jamie Smith and Libertarian Tracey Quint, took the time to answer questions about her campaign and some of her administration's accomplishments in her first term.

She repeated her promise that, if reelected, she would lead an effort to repeal the grocery sales tax. That could only be done through the state Legislature, which has not been able to pass a bill to repeal it in the past and did not have enough support to call a special session.

"The repeal of sales tax on grocery items would put hundreds and hundreds of dollars back in the pockets of every single family in the state of South Dakota," Noem said. "It's a really big deal and it's very important to help fight off some of the inflation that we're seeing and give people the opportunity to use those dollars somewhere that's a priority for them and their families."

Noem admitted that the proposed tax cut would take away approximately $100 million from the state budget annually. She said that a strong economy in the state would help counter that loss.

"When you have low taxes and low regulations, you recruit new businesses and help the ones that are here to expand and you raise people's incomes," Noem said. "There's going to be more permanent revenue into the state budget, and we're seeing that over and over again."

Noem touted her support of national conservative talking points that she has brought to South Dakota and some of the laws passed to support those ideals including banning critical race theory in South Dakota schools and banning transgender girls and women from competing on female sports teams.

The governor, who has faced speculation that she may be contemplating national office in 2024, soundly deflected an audience member's question about it.

"I have no other interests," Noem said in response to the question about a potential 2024 bid.

With recreational marijuana legalization on the November ballot, Noem addressed why she successfully pushed for the 2020 ballot measure to be challenged and overturned in court. Critics have said Noem's actions overruled the will of the people, who approved legalizing marijuana with 54% of the vote.

Noem said she pushed for the court challenge because it was unconstitutional. She said the act violated South Dakota's law that constitutional amendments must only contain one subject.

"I raised my right hand and said that I would uphold the state Constitution and the U.S. Constitution. The basis of every decision comes from that," Noem said.

"If it passes, it's going to be implemented. That's just the facts," Noem said.

The governor defended her actions during the onset of the COVID-19 pandemic by not forcing businesses to close and not instituting a face mask mandate or a vaccine requirement, despite that as of Wednesday 264,187 cases of the virus and 3,059 deaths have occurred in South Dakota.

She also addressed a question from an audience member who made claims that the COVID-19 vaccine wasn't safe. Noem said she wasn't going to make a statement substantiating those claims.

"I'm not going to make that broad of a statement. We do know that the vaccines they have come up with, that this virus changes more rapidly than some of the vaccines can keep up with it," Noem said. "Yes, it is still an experimental vaccine and we cannot guarantee what the consequences of that are."

Noem said her administration has "been pretty bold" about sharing accurate information about the vaccine with South Dakotans and not forcing mandates on it. As of Wednesday, the Centers for Disease Control reports nearly 70% of South Dakota residents age 5 and older have completed the primary series of COVID-19 vaccines.

"My Department of Health is pushing out as much information to keep you as informed as possible on every single public health threat that we face," she said.

BROOKINGS - Richard Carl "Rick" Wahlstrom, 99, of Brookings, passed away quietly on Monday, January 23, 2023 with his family by his side.

Is our economy doing better or worse? See recent changes in local employment, regional inflation and more in these regularly updated charts and maps.

Deloris (Dee) V. (Ellerman) Haedt Holmgren peacefully and without fanfare moved on to the next phase of life on Tuesday afternoon, January 24, 2023.

NEW UNDERWOOD -- Lloyd "JR" Marti was born November 30, 1955 to Verla and Cecil Marti and raised in Sturgis. He died unexpectedly on January 1…

RAPID CITY -- Larry A. Hoback of Rapid City, SD passed away with dementia on January 22, 2023 surrounded by his family.

South Dakota Gov. Kristi Noem listens to a group of constituents during a meeting Thursday morning at the Hotel Alex Johnson in Rapid City.

South Dakota Gov. Kristi Noem, left, talks with a constituent during a meeting Thursday morning at the Hotel Alex Johnson in Rapid City.