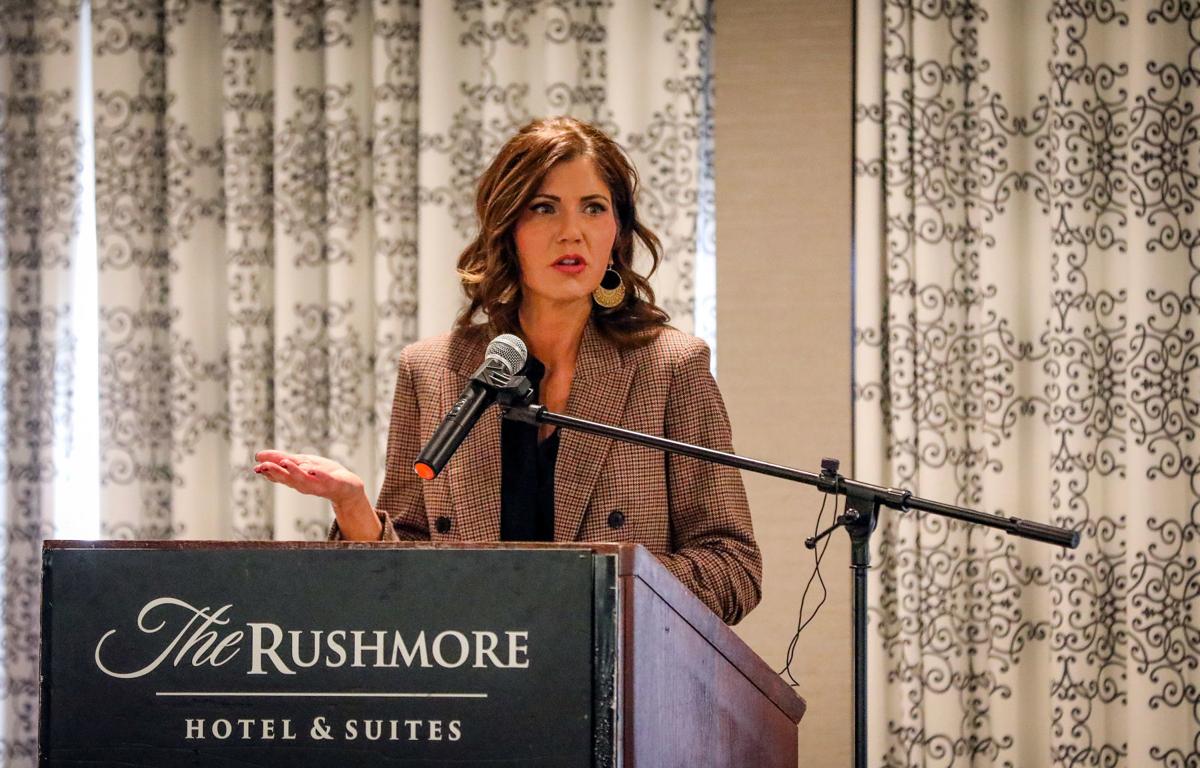 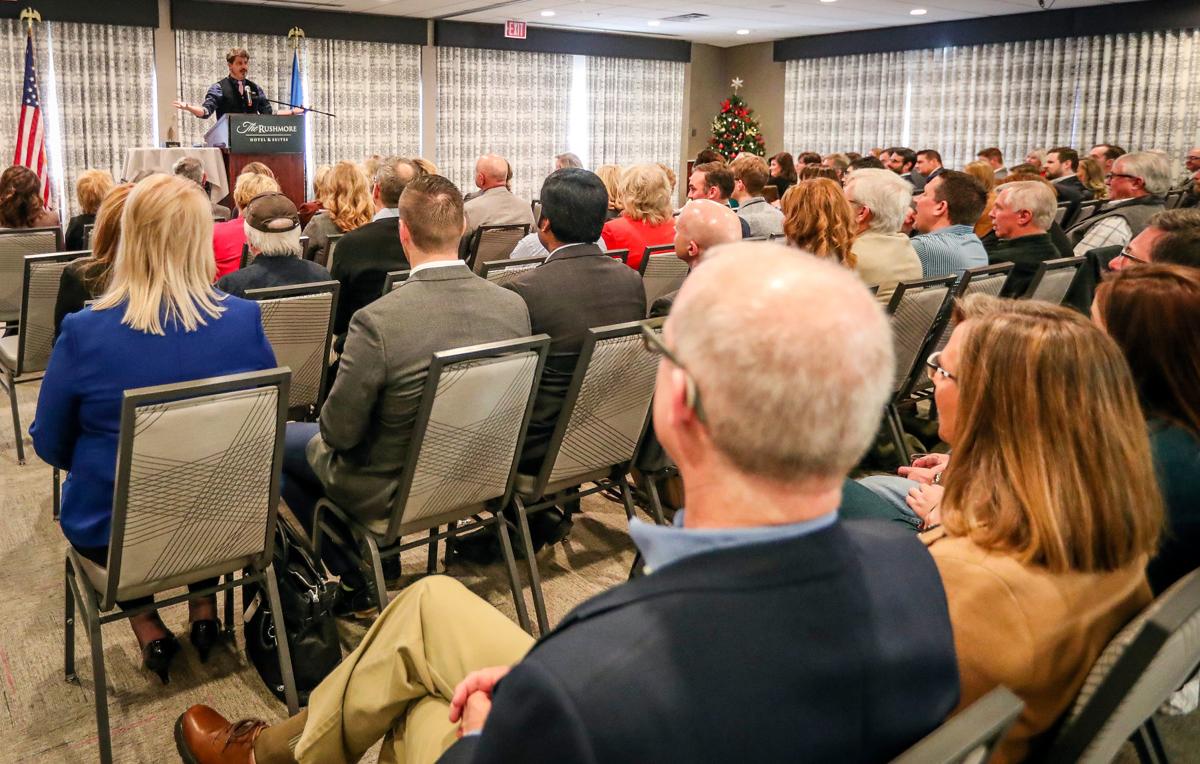 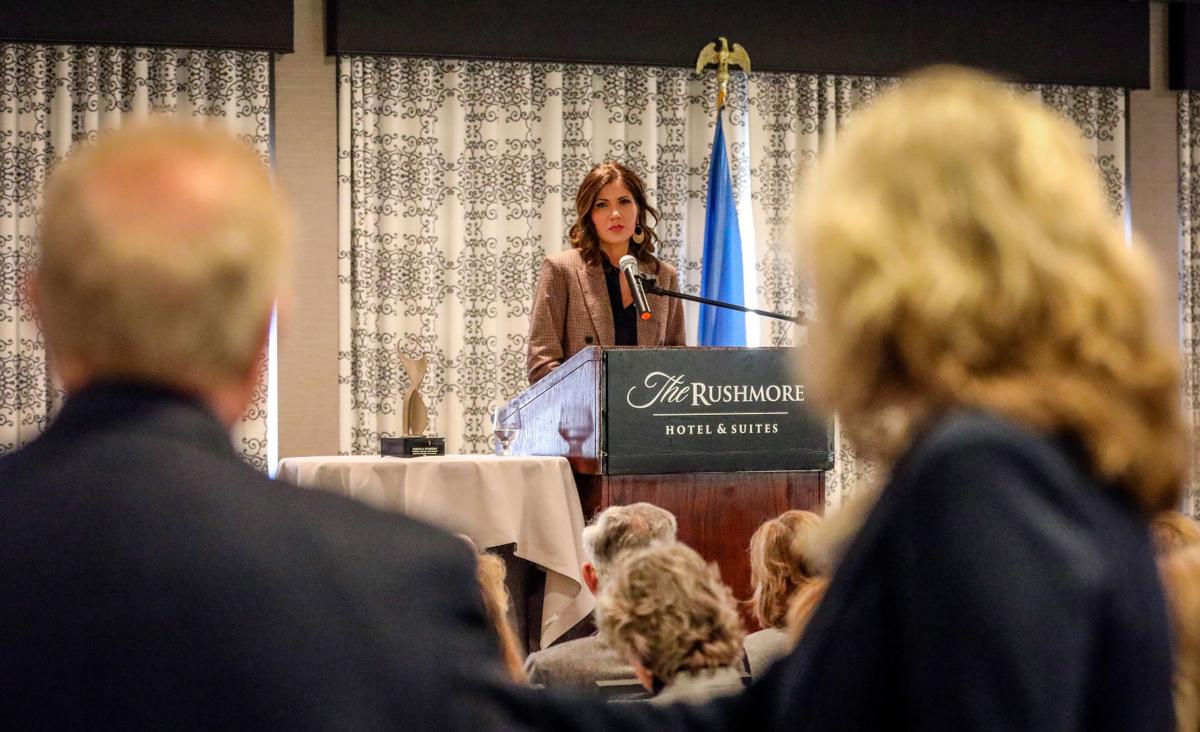 Gov. Kristi Noem listens to a member of the audience ask a question Wednesday at The Rushmore Hotel in Rapid City.

Gov. Kristi Noem said Wednesday in Rapid City that a personal experience motivated her anti-methamphetamine activism and led to a controversial public-awareness campaign.

During a speech to about 200 community leaders at The Rushmore Hotel, Noem traced her concern about meth to an interaction she had “years ago” with a man at the South Dakota State Fair in Huron while she was a congresswoman. She described the man as high on the drug.

“He told me he was at home watching TV, and the TV was talking to him and told him to go to the State Fair and find Kristi Noem,” the governor said.

Noem said she remembers thinking, “I have no idea what to do for this man.”

Sometime later, she said, law enforcement in Aberdeen showed her body-camera footage of officers entering a home where a mother was on meth.

“They went into this home and there were three little kiddos in this house, just sobbing, just absolutely distraught, and mom was high on meth and she was beating her head against the wall, and just was throwing things and breaking windows, and there was blood on the wall, and these kids were sitting there watching this, and this is what our law enforcement officers run into every day,” Noem said. “And I was thinking about the fact that probably people walking by on the street had no idea what was going on inside that house."

Noem also said she saw a woman several weeks ago at a restaurant in Watertown who was high on meth.

Noem channeled her concerns about meth into a recent anti-meth advertising campaign that went viral on social media and drew global reaction, including mockery. The campaign features the slogan “We’re on it” and depicts everyday South Dakotans saying “I’m on it,” apparently with an intended double meaning — that meth addiction is affecting people from all walks of life and that everyone in South Dakota should be “on” the problem to solve it.

State government has paid a Minnesota ad agency $715,000 for the campaign so far as part of a $1.4 million contract. Noem said Wednesday that the first phase of the campaign was intended to raise awareness, and the second phase, which she said will begin soon, will tell people what to do about the problem — what resources to consult, where to direct addicts, etc. Some of that information is already available on the campaign's website, onmeth.com.

Noem’s appearance in Rapid City came one day after she delivered her budget address to the Legislature at the Capitol in Pierre. Much of her Rapid City speech was a recap of the budget address, but she spent a considerable amount of time talking off-the-cuff about meth, and she fielded some comments and questions about it from the audience.

“So that is the main goal of mine, is to kind of wake people up and recognize that we all have a role in this.”

The Chamber of Commerce division of Elevate Rapid City took the opportunity to honor a local woman Wednesday while Gov. Kristi Noem — the stat…

SIOUX FALLS | Gov. Kristi Noem on Tuesday offered her budget proposals for the next year while acknowledging that money is tight and instructi…

Legislators to discuss issues at forum

Hemp, parental rights and budgeting are among the many topics that will be discussed by Pennington County state lawmakers next week at the Hol…

South Dakota is losing the war on drugs and drug laws

South Dakota's anti-meth campaign is embarrassing. So are our drug laws.

In South Dakota, meth fighters welcome any help they get

SIOUX FALLS | South Dakota's new anti-drug campaign drew plenty of mockery on social media this week for its "Meth: We're on it" slogan, but a…

Efforts by state Sen. Jeff Partridge to propose a “health-care college” at the university center in Rapid City and to win a state appropriatio…

Gov. Kristi Noem listens to a member of the audience ask a question Wednesday at The Rushmore Hotel in Rapid City.