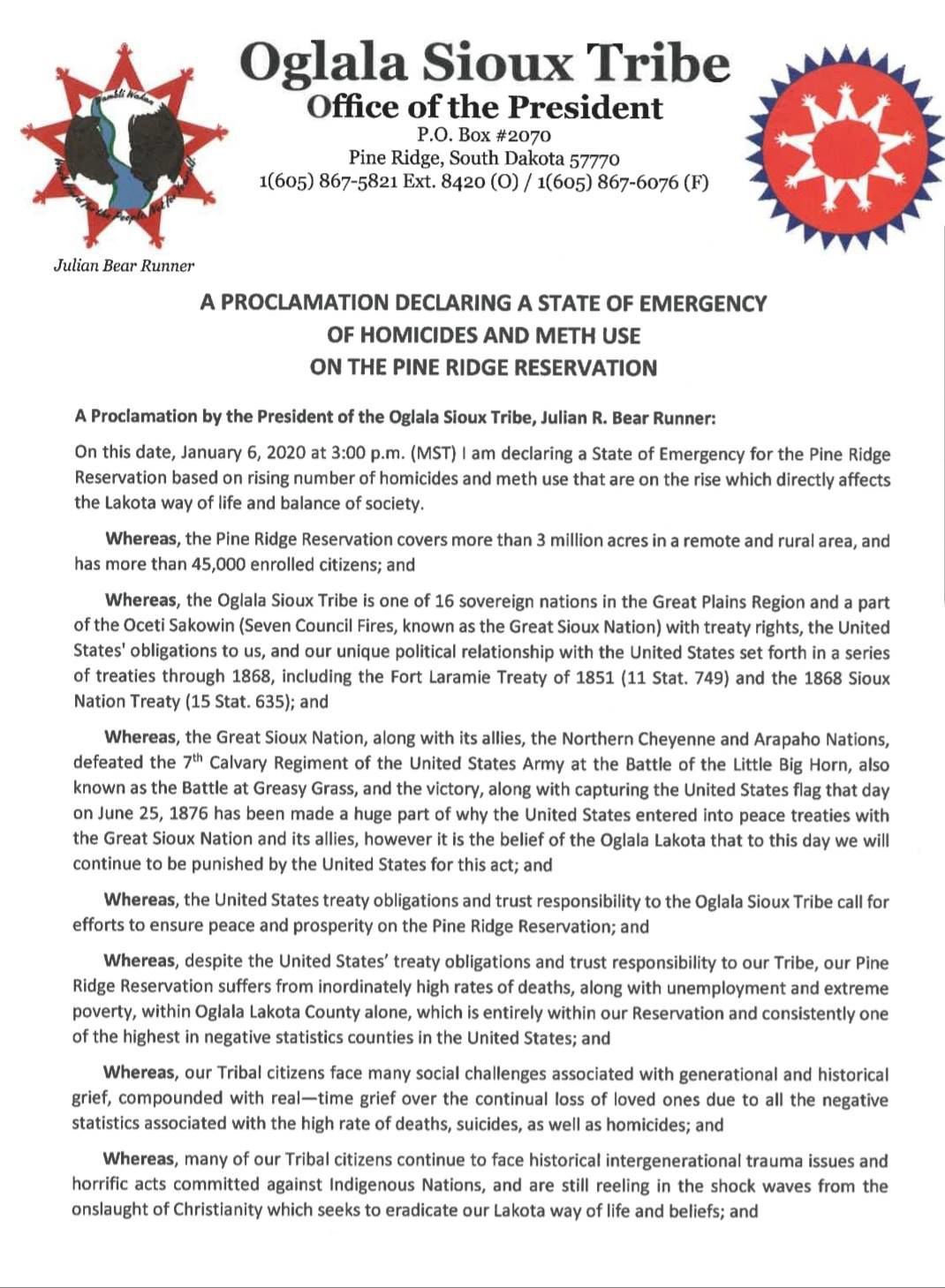 Page one of the meth and homicide emergency declaration by Julian Bear Runner, president of the Oglala Sioux Tribe. 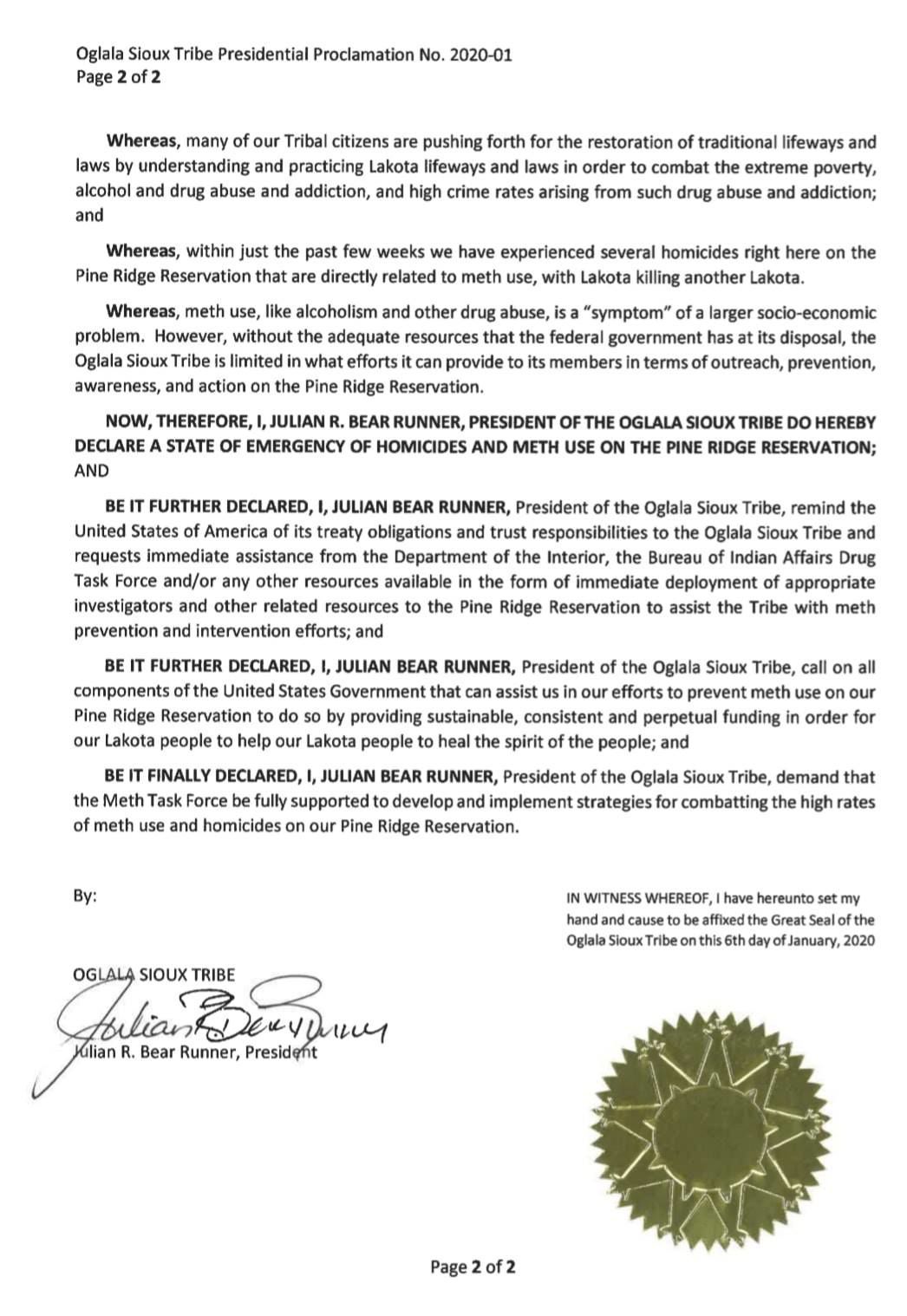 The second page of the meth and homicide emergency declaration by Julian Bear Runner, president of the Oglala Sioux Tribe.

"We live in a constant state of crisis and trauma," Julian Bear Runner wrote on a Facebook post Monday announcing the declaration. "My heart hurts for those families who've lost loved ones recently and throughout. As president, I will do all in my authority to carry out your will, to defend our homelands and create a safe place to raise our families."

"Meth is available here for cheap," presidential spokesman Chase Iron Eyes said Tuesday. "It causes our people to become something that they're not."

Bear Runner said that use of meth, alcohol and other drugs is a symptom of larger socio-economic problems on the reservation, which has one of the lowest life expectancies and highest unemployment and poverty rates in the U.S.

"Our tribal citizens face many social challenges associated with generational and historical grief compounded with real-time grief over the continual loss of loved ones due to all the negative statistics associated with the high rates of deaths, suicides as well as homicides," he wrote. Many "continue to face historical inter-generational trauma issues and horrific acts committed against indigenous nations, and are still reeling in the shock waves from the onslaught of Christianity which seeks to eradicate our Lakota way of life and beliefs."

Bear Runner wrote in his declaration that the reservation has had several homicides in the past few weeks "directly related to meth use with Lakota killing another Lakota."

Weston was killed Jan. 3, according to the FBI. Weston's mother told the Journal on Tuesday that law enforcement told her that he was shot in the chest while answering a knock on his front door and wasn't the intended target. No arrests have been announced but tribal police say they're looking for a vehicle and people of interest.

Bull Bear was shot in the back of the head during a gathering at an apartment on Dec. 17 where "dope" may have been present, according to an affidavit.

Colton Bagola, 26, was arrested three days later after a standoff with law enforcement in Rapid City and charged with second-degree murder. Daneta Wollmann, a federal magistrate judge, ruled Monday that there's enough probable cause to continue the case after listening to a prosecutor and defense lawyer question an FBI agent, court records show.

Kevin Smith, spokesman for the FBI, said he can't comment on Bear Runner's statement about these cases being linked to meth since they are under investigation.

"We can say, however, that substance abuse, which includes an increasing amount of methamphetamine, is a significant factor in most of the violent criminal investigations our agents conduct on the Pine Ridge Indian Reservation," he said. "President Bear Runner's emergency declaration is a strong reminder of the havoc methamphetamine causes within our communities."

FBI data shows that homicide rates on the reservation have remained steady since 2017. Weston is the sole homicide victim so far this year. There were four reported homicides in 2019, three in 2018 and three in 2017. Those numbers are down from 2016 when 14 people were killed, a spike the FBI attributed to violent behavior linked to meth users and dealers. Nine people were killed in 2015, the year that meth began replacing cocaine as the drug of choice on the reservation, the FBI said.

The emergency declaration is meant to direct tribal agencies to focus on the meth problem and let citizens know the government is prioritizing the issue, Iron Eyes said.

He said Bear Runner wants to look to the community and the federal government to combat meth and violence.

"There's very dedicated community members and veterans who are discussing among themselves how to protect our communities" by forming a neighborhood watch-type group, Iron Eyes said. "We want to try to strengthen ourselves internally."

Many tribal citizens are turning to traditional Lakota culture to combat poverty, crime and drug use, Bear Runner wrote in his declaration.

Bear Runner is also asking the federal government to fulfill its treaty obligations by providing appropriate funding and resources to combat homicides and prevent and treat meth use.

"Without the adequate resources that the federal government has at its disposal, the Oglala Sioux Tribe is limited in what efforts it can provide to its members in terms of outreach, prevention and awareness," he wrote.

Iron Eyes said the tribe is in communication with the Bureau of Indian Affairs about possibly receiving more funding and officers.

Smith said that meth and other drugs aren't being produced on the reservation — they come from other cities. The FBI's first Safe Trails Drug Task Force was launched in 1999 and focused on distributors who live on reservations throughout South Dakota and their out-of-state suppliers, he said. Last year, the FBI created another task force — staffed by federal, tribal, state and local law enforcement officers — that specifically focuses on the Pine Ridge Reservation.

Smith said this new task force has "identified some gaps in our efforts" that are mostly related to communication between the task force and tribal authorities.

"To close those gaps, we now have quarterly meetings with tribal criminal justice officials to improve communication and information sharing," he said.

Rapid City man speaks out against meth after twin's death

Page one of the meth and homicide emergency declaration by Julian Bear Runner, president of the Oglala Sioux Tribe.

The second page of the meth and homicide emergency declaration by Julian Bear Runner, president of the Oglala Sioux Tribe.