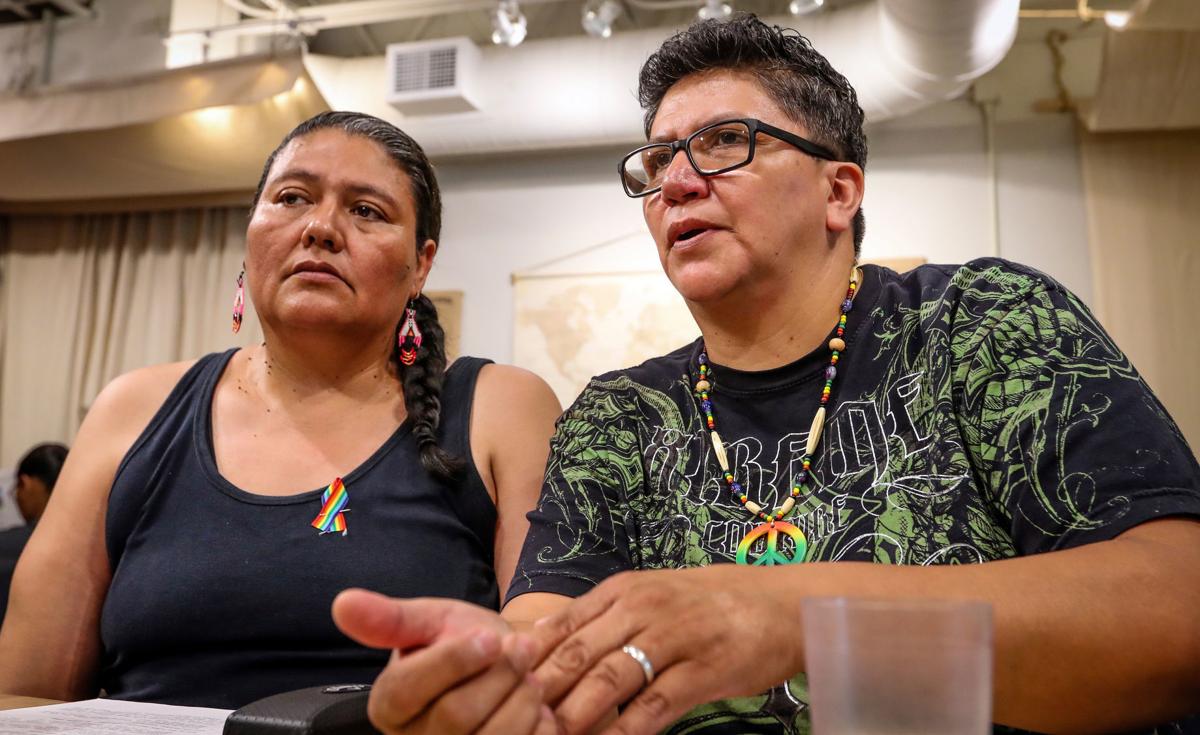 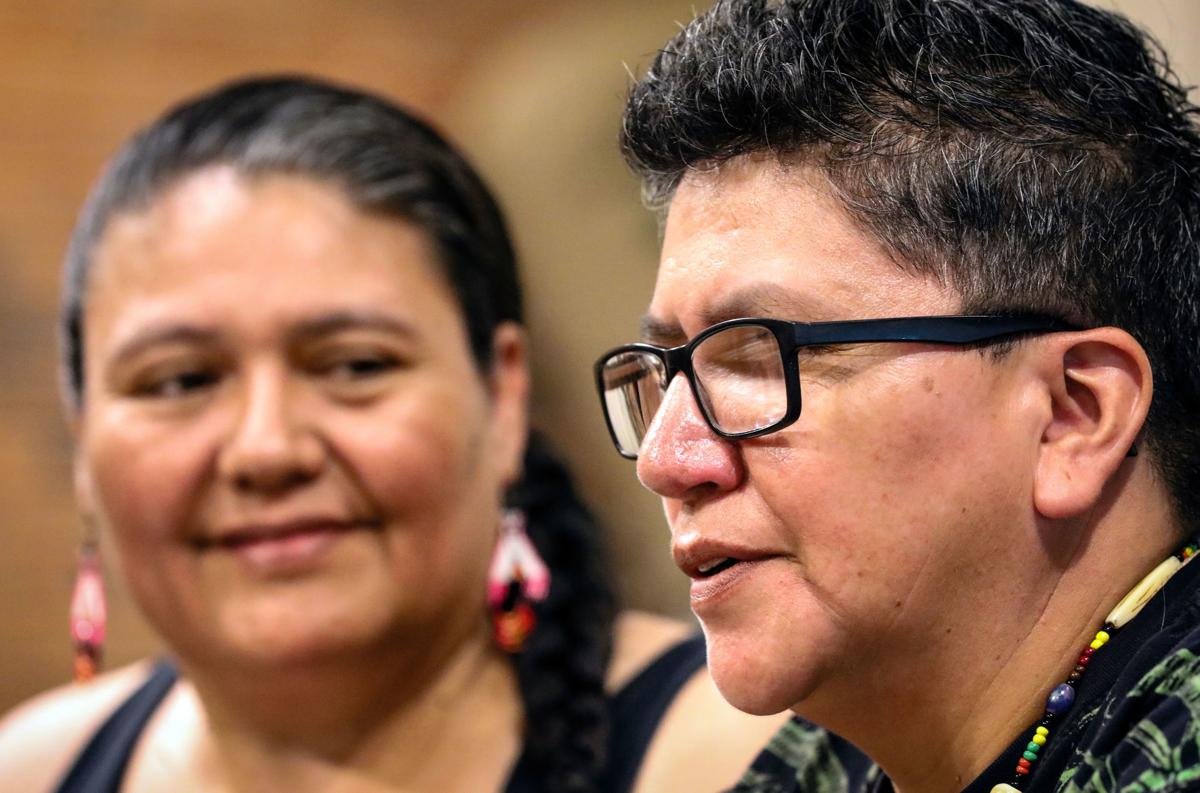 Monique "Muffie" Mousseaux, right, speaks about about marriage equality while her wife, Felipa De Leon, looks on in Rapid City. 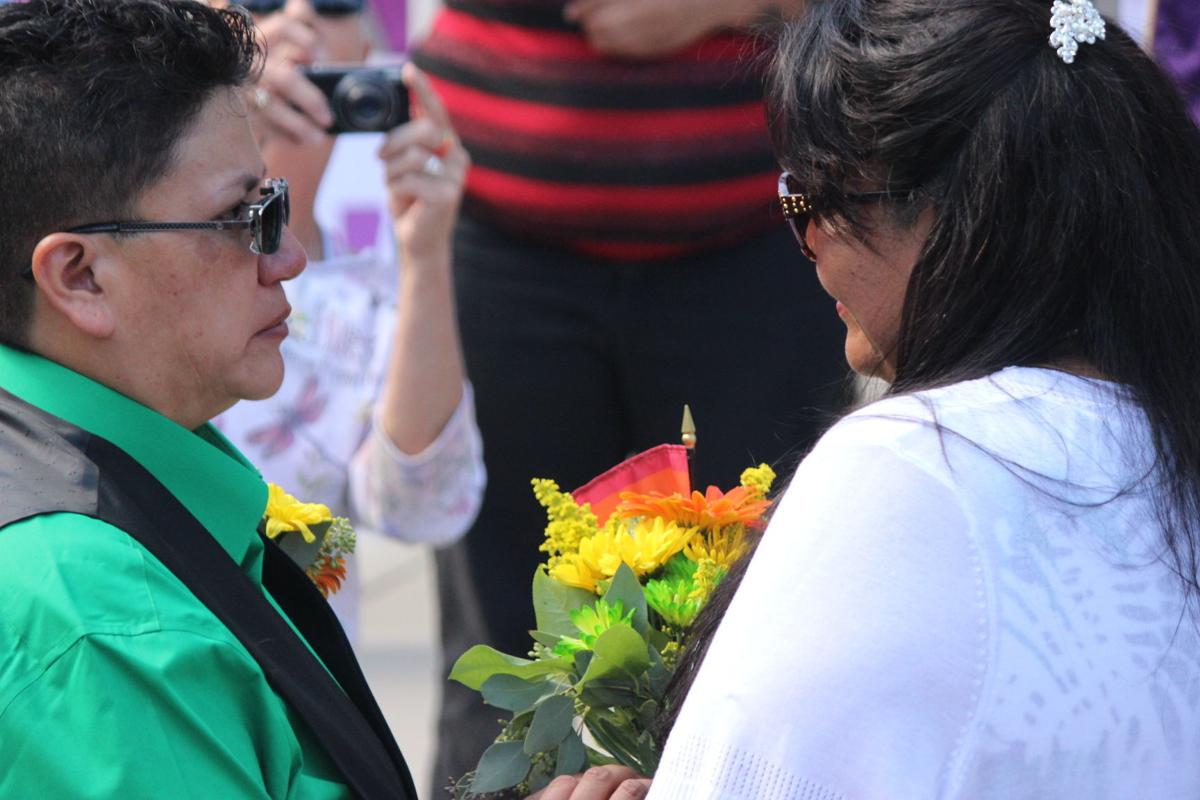 Monique "Muffie" Mousseaux (left) and Felipa De Leon are seen getting married at Mount Rushmore in this 2015 Journal photograph. 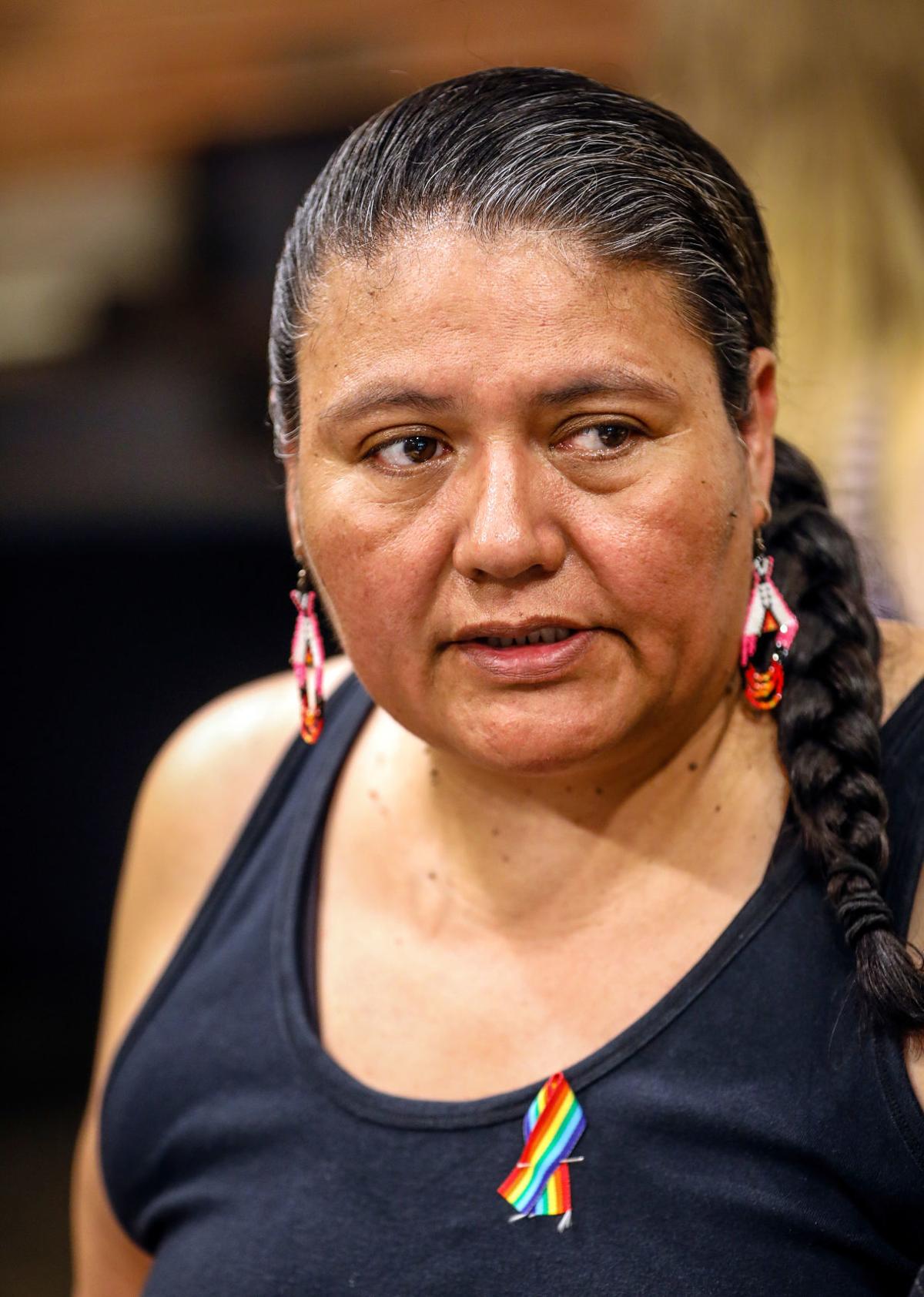 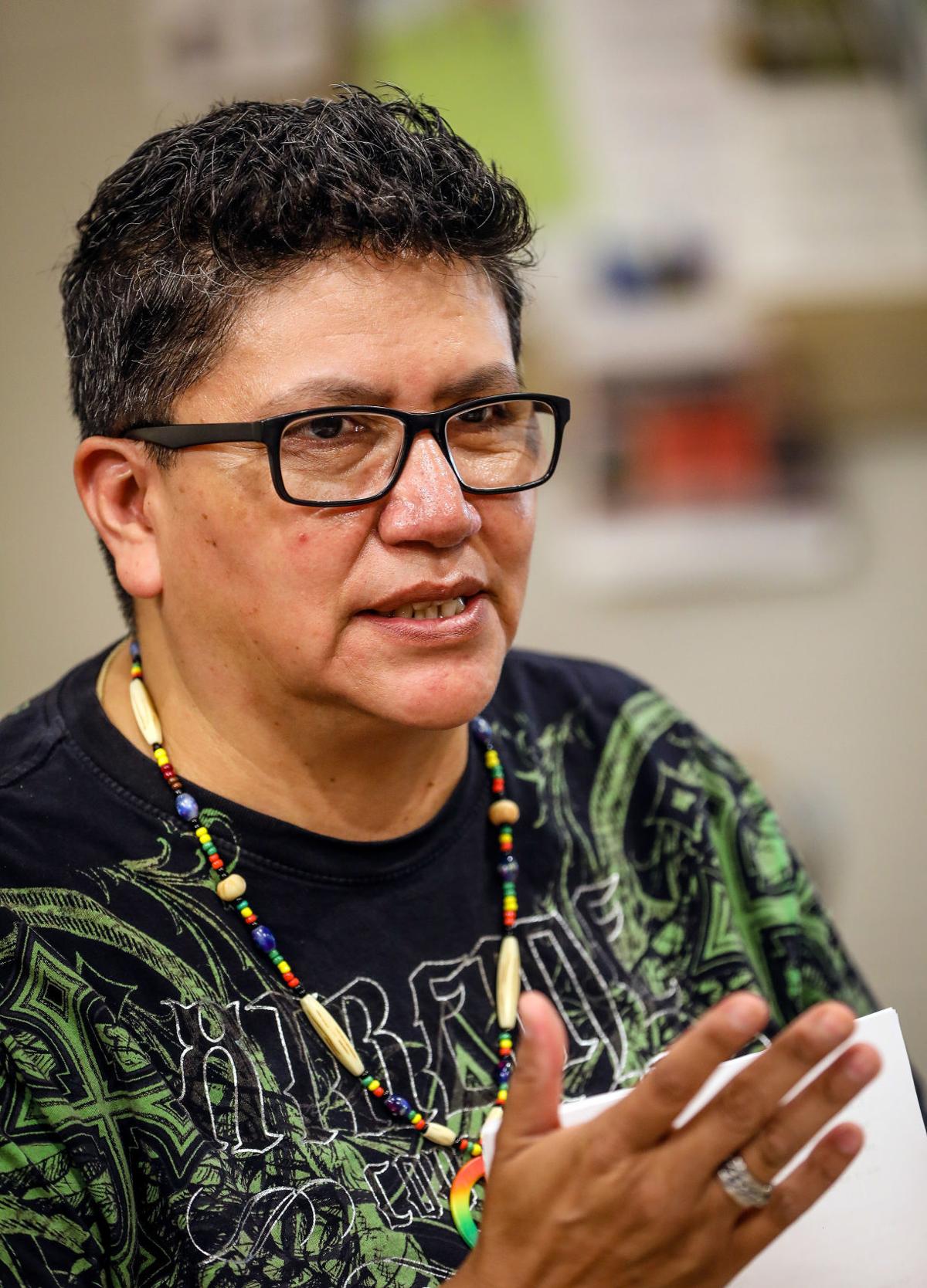 Monique "Muffie" Mousseaux and Felipa De Leon immediately called officials at the Oglala Sioux Tribe after the U.S. Supreme Court legalized same-sex marriage in 2015 to see if they could get married.

But they learned the case didn't apply to Native American reservations and were told the OST's constitution doesn't allow for same-sex marriage. So instead of getting married through their tribe, the couple received a license in Pennington County and wed at a group ceremony at Mount Rushmore.

Four years later, the couple will soon be able to wed through their tribe after they helped change the marriage laws, which were approved with a 12-3 vote and one abstention by the OST council on July 8.

"Marriages between two people of the same sex are hereby authorized and recognized by the Oglala Sioux Tribe," an unsigned copy of the amendment reads.

"We are looking out for future generations, for protections and for equality," Mousseaux said Friday at a Rapid City coffee shop. "These foundations of laws have to be in place because we have grandkids. And that next generation coming up, we don't want them experiencing the same (gay) bashing, we don't want them to get to a point where somebody says a bad word to them because they like somebody of the same sex and they hang themselves. We don't want that."

It's "really awesome" that the ordinance passed the week before Rapid City's pride celebration last weekend and near her birthday, Mousseaux said with a laugh.

They have been a couple since 2005 and live in Rapid City, but three of their five children and four of their five grandchildren live on the Pine Ridge Reservation.

Obergefell v. Hodges legalized same-sex marriage in all 50 states, but not for the 573 federally recognized tribes, said Marcia Zug, a professor at the University of South Carolina School of Law who specializes in family and federal Indian law.

"Tribes have the right to make the decision themselves," she said.

As quasi-sovereign nations, tribes have control over certain rules that directly impact their tribal members even if they violate federal equal protection rules, Zug said. That principal was solidified in Santa Clara Pueblo v. Martinez, a 1978 landmark U.S. Supreme Court case that said the pueblo has the right to give tribal membership to the children of men who marry outside the tribe while preventing women who marry outside the tribe from passing on their tribal membership.

Even though tribes don't have to follow Obergefell, Zug said, "the trend is certainly moving in that direction, and I would think most in the next couple of decades will recognize same-sex marriage."

Zug said there is no geographical or historical pattern that explains why some tribes allow same-sex marriage while others don't. For example, the Navajo Nation explicitly bans same-sex marriage despite two spirit individuals being traditional Diné (Navajo) culture and other Southwest tribes allowing such marriages.

It's unclear how many tribes do allow same-sex marriage. Ones that do include the Cherokee Nation, the Blackfeet Nation in Montana, and the the Northern Arapahoe and Eastern Shoshone tribes of the Wind River Reservation in Wyoming. Mousseaux and De Leon said they believe the OST is the first tribe in South Dakota to legalize same-sex marriages.

Mousseaux said she was happy to see the OST approve of same-sex marriage through its own sovereign process, even if meant waiting longer.

"I am very proud of our sovereignty," she said. "I embrace that. I enjoy going through what we're going through right now. It's a great victory on all Native Americans."

She compared the process and her and De Leon's involvement to "I'm Just a Bill," the Schoolhouse Rock song that explains how laws are created. "That's me, coming along with marriage equality with my tribe."

Mousseaux said she and De Leon met with the Scott James, the OST attorney general, in May. James said he told the couple that the tribe has no hate crime laws and that laws from 1937 prevent same-sex marriage since they reference only men and women, or a husband and wife, getting married.

The old law is "very clear that it's limiting" marriages to only those between a man and a woman since it uses the word "and" rather than "or," James said.

"I feel like the tribe's always been eager to adopt progressive views" and now they're getting around to changing the marriage laws and creating hate crime ones, he said.

After speaking with James, Mousseaux said, she and De Leon went to the Law and Order Committee where its members placed the ordinance on the agenda and the couple testified in favor of it. The committee passed it in June before it was ultimately approved by the full council.

Mousseaux said she and De Leon were motivated to help legalize same-sex marriage in order to prevent LGBT people from getting beat up and bullied and also because others encouraged them to do so.

De Leon said her 16-year-old niece killed herself in 2015 after being harassed about her sexual orientation.

"It really hurt me and it broke my heart because she was so young and she was being bullied" by family members and classmates, she said.

Mousseaux said community members learned she was dating and living with De Leon in 2006, when she was working as a police officer and living in Kyle. The couple left the reservation after being "gay bashed" that year but returned in 2007 and Mousseaux rejoined the police force. After being attacked in 2009, they fled again out of fear for their own safety and that of their children, even if it meant leaving their relatives and home behind.

"We chose to leave and not address anything. And there was no protections in place, there was no recourse," Mousseaux said. "We just decided to not shake the boat, we left."

Mousseaux said her next step is to encourage the OST council to pass LGBT hate crime legislation modeled after the federal Matthew Shepard Act, which made crimes motivated by gender and sexual orientation a hate crime.

"We are all human beings and we do have another generation coming up and we want that hate to stop. We don't want to have hatred breeding hatred," she said.

Mousseaux stressed that two spirit people were accepted and honored in Lakota and other indigenous cultures before colonizers killed and suppressed two spirit people and the greater Native American communities.

"There have always been two spirit Native American people," she said. "So realize that, that was a very, very powerful thing that was silenced."

This story has been updated to include information from the OST Attorney General.

Monique "Muffie" Mousseaux, right, speaks about about marriage equality while her wife, Felipa De Leon, looks on in Rapid City.

Monique "Muffie" Mousseaux (left) and Felipa De Leon are seen getting married at Mount Rushmore in this 2015 Journal photograph.