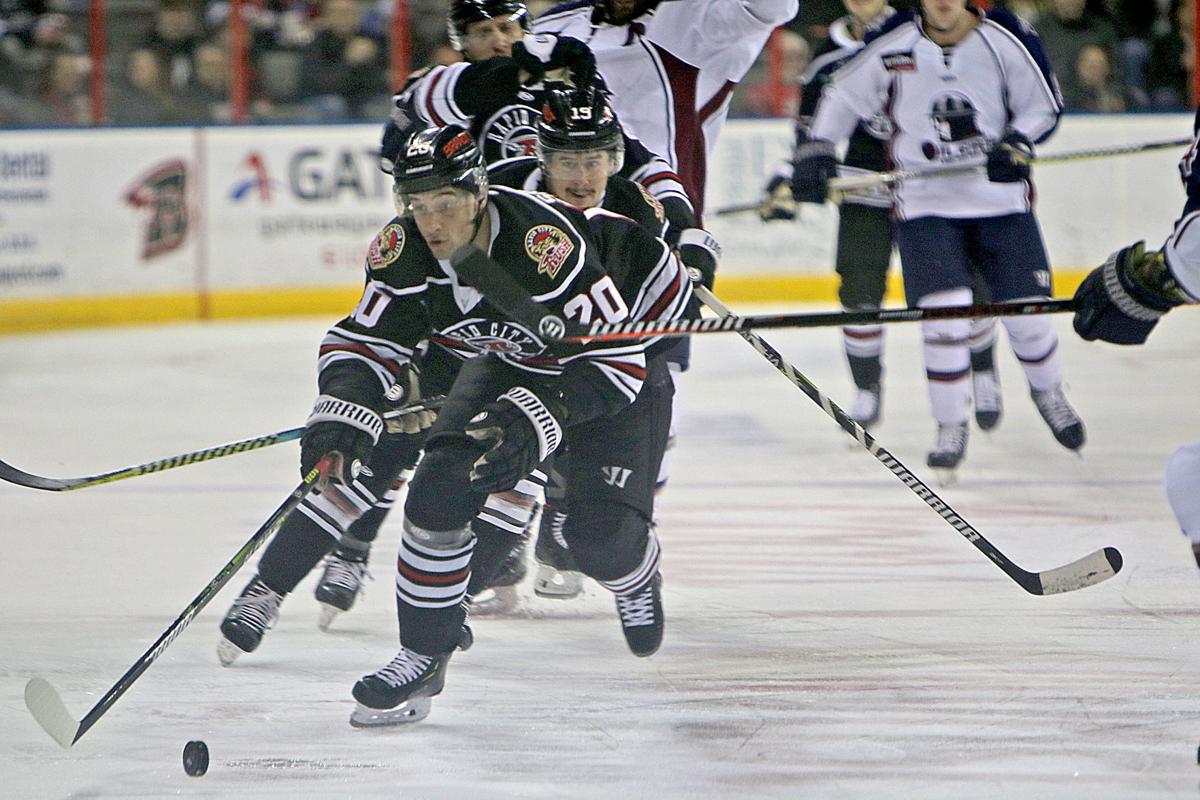 Rapid City Rush left-winger Brennan Saulnier (20) carries the puck through neutral ice just seconds ahead of scoring a "spin-o-rama" goal during the Rush’s ECHL hockey game against the Tulsa Oilers on Sunday at the Rushmore Plaza Civic Center Ice Arena in Rapid City. 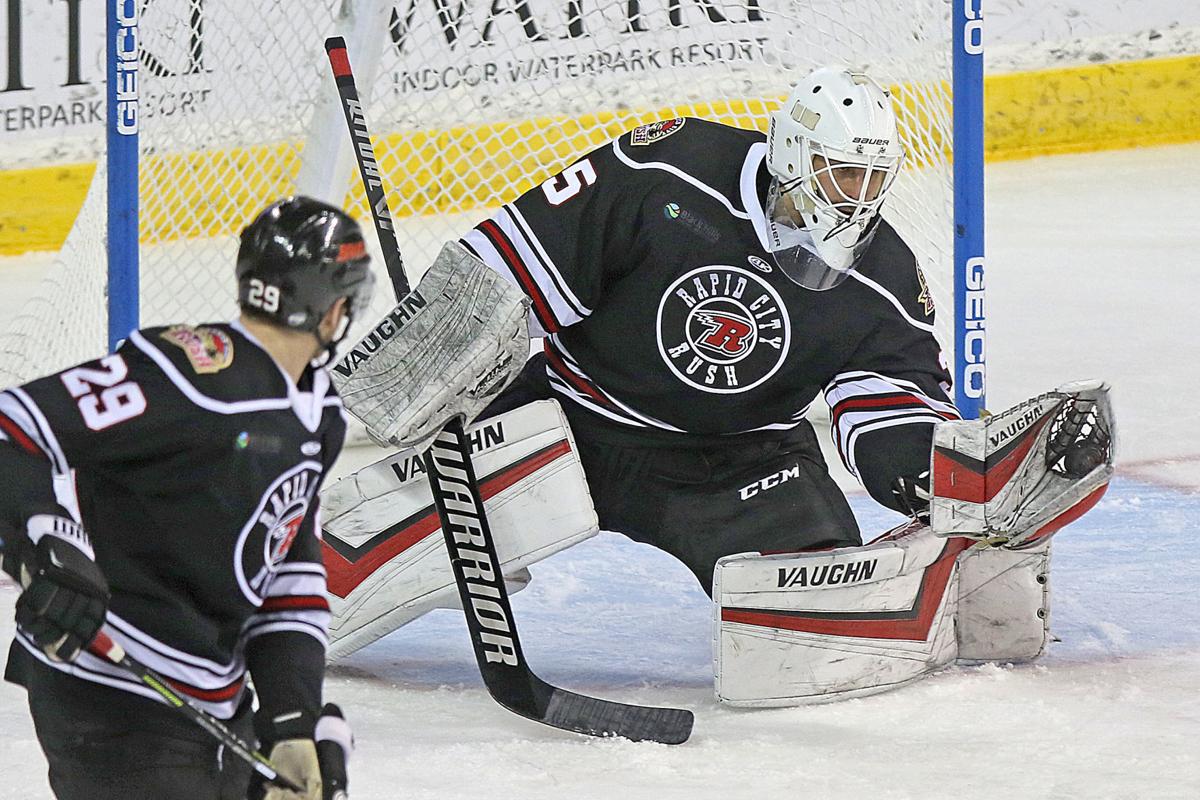 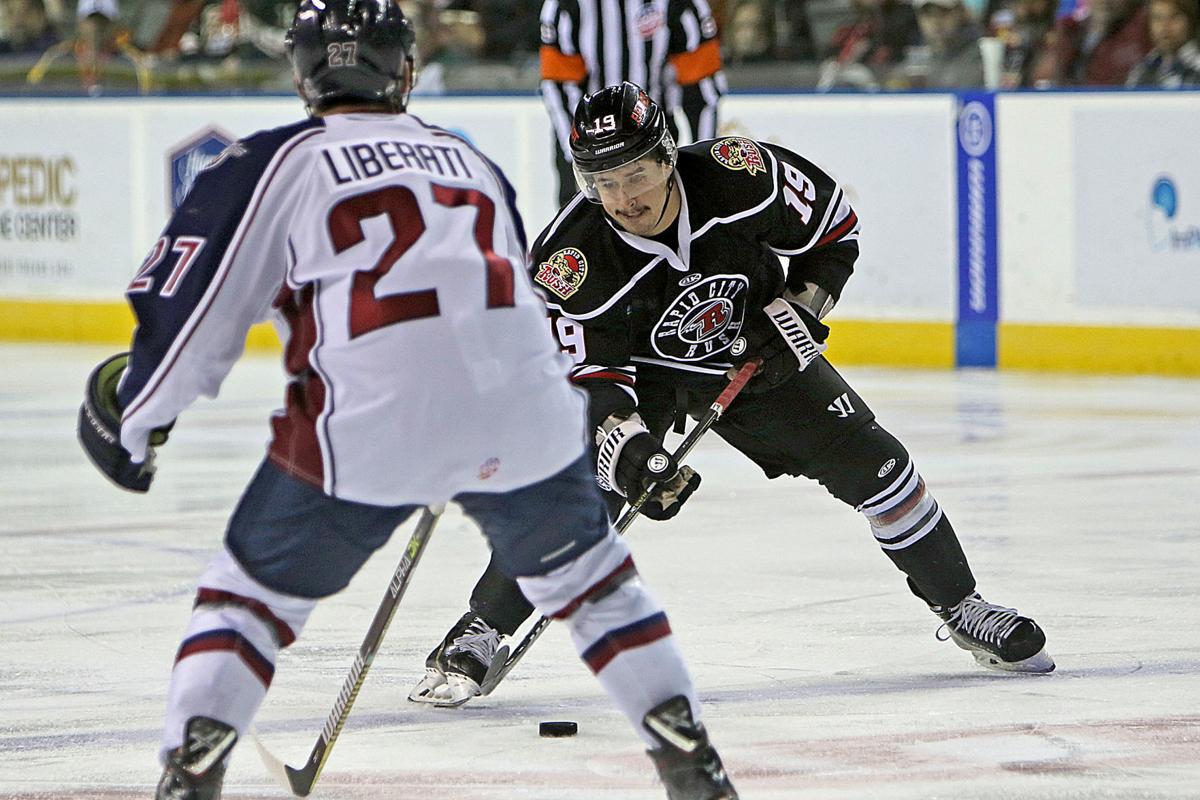 Rapid City Rush Tanner Karty (19) brings the puck into the Tulsa Oiler zone in front of Oiler defenseman Miles Liberati (27) during the Rush’s ECHL hockey game against the Tulsa Oilers on Sunday at the Rushmore Plaza Civic Center Ice Arena in Rapid City. 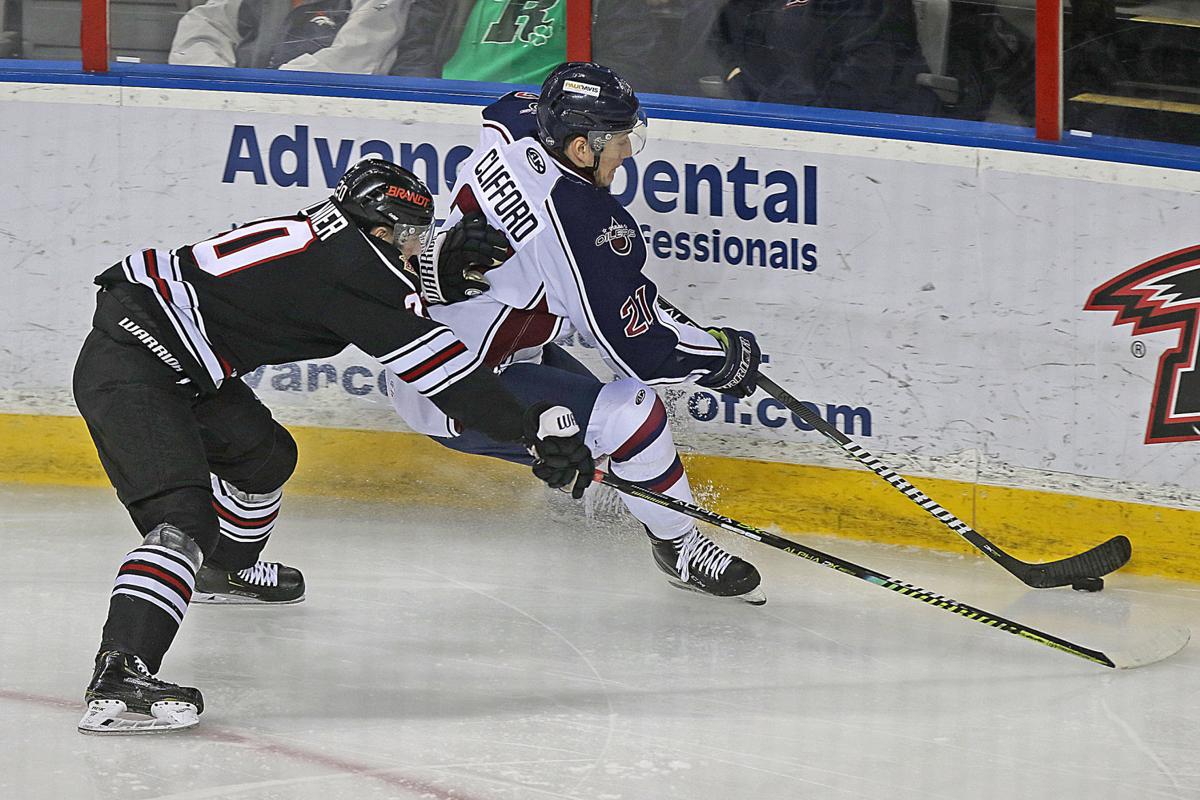 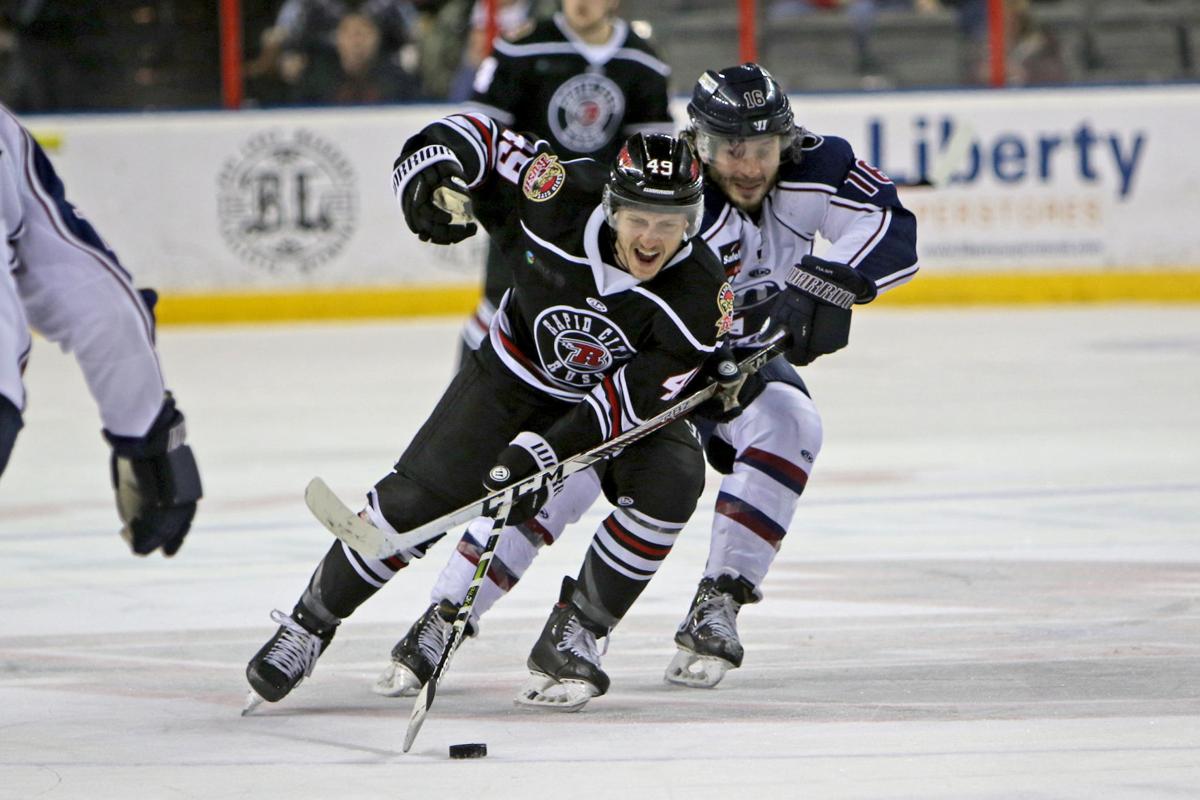 Rapid City Rush right-winger Dante Salturo (49) tries to fight off Tulsa Oiler forward J.J. Piccinich (16) as he carries the puck through the neutral zone during the Rush’s ECHL hockey game against the Tulsa Oilers on Sunday at the Rushmore Plaza Civic Center Ice Arena in Rapid City.

Tulsa scored two shorthanded goals and tallied six goals over the final two periods of play to jump back over the shorthanded Rapid City Rush in the ECHL’s Mountain Division standings with a 6-3 win in a matinee game Sunday at the Rushmore Plaza Civic Center Ice Arena.

With the win, Tulsa is now back in fourth place a night after the Rush moved ahead of them with a high-flying 8-4 win Saturday.

The Oilers now have 62 points to Rapid City’s 61 with just over a month to go in the regular season. The Rush have 14 games to play before the playoffs start to Tulsa’s 11.

“There’s no panic,” Rapid City head coach Daniel Tetrault said after the game. “We’re still in a good position. We have three games in hand. We have a good home schedule. We’ll make some appropriate moves this week to improve the team.”

The Rush were playing without defenseman Chris Leibinger, who left the team after Saturday’s win over the Oilers, and then lost assistant captain and defenseman Josh Elmes to a lower body injury midway through the game.

Down to five defensemen, Tetrault was forced to move center Tyler Coulter back to fill in on the blue line so he had three sets of defensemen in his rotation.

Playing their third game in less than 48 hours, the Rush ran out of steam after a strong first period. Tulsa scored three goals in the second and three more in the third to take the rubber game of the three-game series.

“Mental mistakes, tired mistakes,” Tetrault said after the loss, marking only the second time Rapid City has dropped a decisive game in a three-game series this season after splitting the first two contests. “Our best players were nonexistent. Shorthanded goals, they are just backbreakers. We’re not shooting the puck, passes through sticks, lazy mistakes.”

Tetrault said he’ll be working the phones this week, looking to sign or trade for help along the blue line and some players with experience at this level to bring leadership to help his young club.

“We need some veteran guys to come in here,” he said. “I don’t have one veteran guy in here, and it shows. We get a lead a lot this year and we give it right back. Or we win one or two in a row and get a little too confident.

“We need big, veteran defensemen, for sure. We’re a small team. We get pushed around and we got outshot pretty bad all weekend.”

Rapid City got on the scoreboard early, lighting the lamp for the first time for the fifth time in six games.

Elmes moved forward in the offensive zone and spotted forward Darian Romanko breaking in on goal. Romanko beat Tulsa goaltender Devin Williams stick-side 1:57 into the game and on Rapid City’s second shot of the game.

The Rush power play was spot-on after Tulsa’s Mike McKee was sent off for cross-checking 7:34 into the opening period. Rapid City didn’t let the puck out of Tulsa’s end of the ice, pressuring Williams throughout, until Coulter was called for tripping 1:19 into the Rush’s man-advantage.

Rapid City goalie Alex Sakellaropoulus, like Gordon Defiel the night before, was sharp between the pipes early. He stopped all 16 shots from the Oilers over the opening 20 minutes and Rapid City went to the first intermission up 1-0.

The Rush began to unravel in the second period, however.

The Oilers kept throwing pucks at Sakellaropoulus, who saved 44 of 50 shots on goal for the game, as play shifted to Rapid City’s end of the ice. Then with Tulsa’s Mike McKee in the penalty box, Ian McNulty knocked down a cross-ice pass near Tulsa's blue line and skated in one-on-one on Sakellaropoulus, beating the Rush goalie to tie the game at 1-all 1:35 into the second period.

Charlie Sampair scored an even-strength goal just over two minutes later to lift the Oilers to a 2-1 lead.

Brennan Saulnier scored the goal of the game when he broke up the boards in front of the Rush bench, executed a gorgeous “spin-o-rama” to beat a Tulsa defender and slipped the puck under Oiler goalie Devin Williams to tie the game at 2-all at 6:37 mark of the second period.

Ryker Killins made it 3-2 Rush 80 seconds later when he took a perfect cross-ice pass from Garrett Milan as the two broke in on Williams. Killins’ one-timer beat Williams stick-side for his fifth goal of the season.

That was the high-water mark for the Rush, though.

Danny Moynihan tied the game at 3-all with 7:03 remaining in the second period. Then just under six minutes into the third period, Ryan Tesink knocked down a Rush clearing pass and beat Sakellaropoulus with a quick wrist shot from the right faceoff circle for Tulsa’s second short-handed goal of the game for a 4-3 lead. The goal proved to be the game-winner.

J.J. Piccinich scored with 5:40 to play in the game to make it 5-3 and Moynihan notched his third point of the game when he scored an empty-net goal with just over a minute to play.

“The first period was great,” Tetrault said. “We just ran out of juice.”

Tulsa (28-26-6-1, 62 points) has a quick turnaround. The Oilers play again Tuesday, taking on the Mountain Division leaders, the Allen Americans, at the BOK Center in Tulsa, Okla.

Rapid City Rush left-winger Brennan Saulnier (20) carries the puck through neutral ice just seconds ahead of scoring a "spin-o-rama" goal during the Rush’s ECHL hockey game against the Tulsa Oilers on Sunday at the Rushmore Plaza Civic Center Ice Arena in Rapid City.

Rapid City Rush Tanner Karty (19) brings the puck into the Tulsa Oiler zone in front of Oiler defenseman Miles Liberati (27) during the Rush’s ECHL hockey game against the Tulsa Oilers on Sunday at the Rushmore Plaza Civic Center Ice Arena in Rapid City.

Rapid City Rush right-winger Dante Salturo (49) tries to fight off Tulsa Oiler forward J.J. Piccinich (16) as he carries the puck through the neutral zone during the Rush’s ECHL hockey game against the Tulsa Oilers on Sunday at the Rushmore Plaza Civic Center Ice Arena in Rapid City.