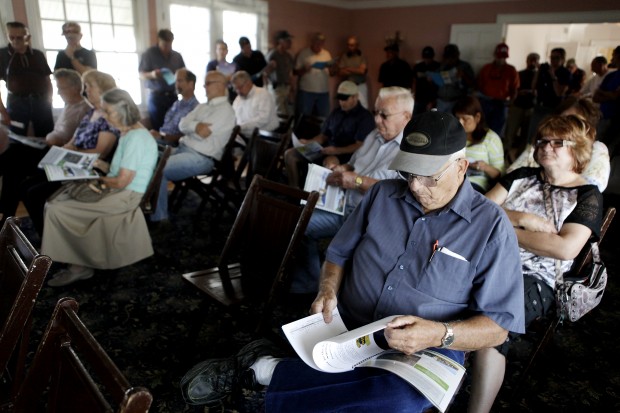 Dale Wileman looks through a property description book before the start of Thursday's auction at the Old Governor's Mansion. The auction was closed after a bid of $410,000. 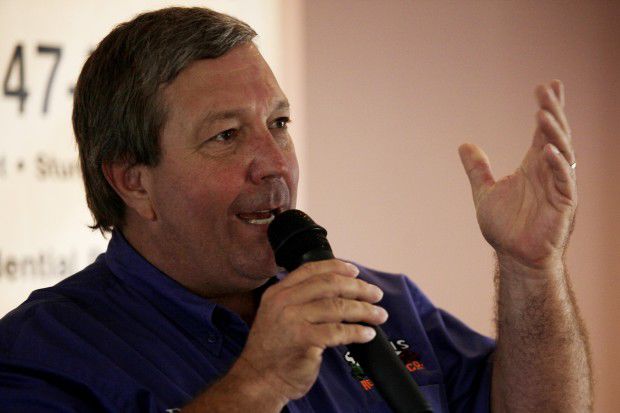 Auctioneer Dave Wilson with Sturgis Real Estate entices the crowd with a lower bid during the auction of the Old Governor's Mansion in 2013. 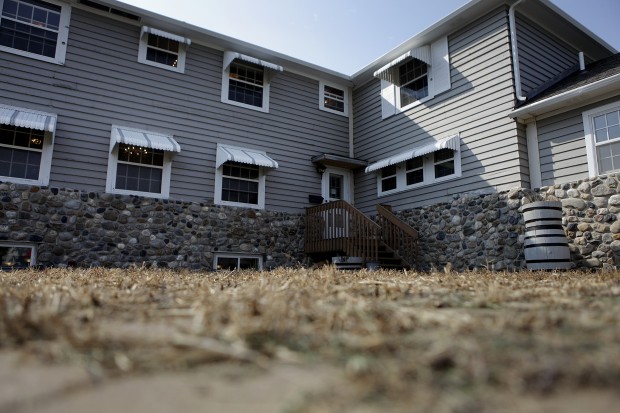 Weeds cover a patio outside the Old Governor's Mansion. An auction was held Thursday for the home that has housed 16 South Dakota governors. 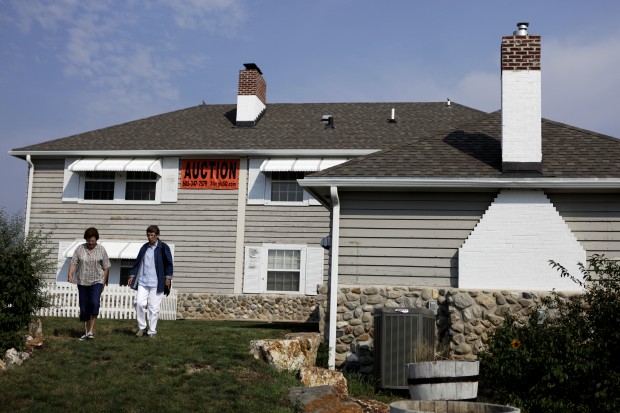 Auction spectators tour the grounds of the Old Governor's Mansion before bidding opened on Thursday.

South Dakota's old governor's mansion was once home to 16 governors and witnessed the flurry and excitement of state events.

On Thursday morning, the aging building welcomed another flurry: dozens of people who came to Rapid Valley to watch it sell at auction.

While dozens of onlookers showed up, only a handful of bids were actually offered for the home that was moved from Pierre to its current site on Anderson Road. By the auction's end, it sold for a price lower than the bank that owns it originally wanted.

The people who flocked to Rapid Valley came to see for themselves the mansion's numbers: 18 rooms, 7,000 square feet, six grand bedrooms, four dining and entertainment rooms.

Originally built in 1936 in the state capital, it now sits on a hill with a view of the rooftops of Rapid City. There's the official state seal on the entrance cover in front and a 'Welcome to South Dakota' historical information sign in the garden nearby.

The mansion, with its Stonehenge replica and pond, drew onlookers to its six bedrooms and various meeting rooms, decorated in hues of red, green and peach.

It's a great place, many visitors agreed. But what could anyone use it for?

"The biggest downfall of it is the location," said Alice Brown, who drove from New Underwood.

"But what are you going to do with it?" said her husband Richard, 79.

Jeanne thought a bed and breakfast would work, if some of the bathrooms were re-arranged.

As Stan Edwards, 74, walked through the mansion's first-floor rooms and peeked around,he agreed. He thought it could serve that role on public land, some place where the building's historical significance would resonate.

"Honestly, I really do think it should be in Custer State Park," said Edwards, who lives nearby. "I just don't think Mr. Brodie saw the potential."

Whatever Leon Brodie saw, he probably didn't think it would end up like this. Brodie, a retired Rapid City dentist, bought the mansion in 2006 and had it shipped from Pierre in four sections.

He bought the mansion for $40,000, spent another $400,000 to move it from Pierre. Then he spent as much as $3 million more to pour a new foundation, renovate and restore the building and landscape the 17.5 acre lot it now sits on.

Things went well at first, as he converted the former statehouse into a place for weddings and events. Several former governors and their families even came for reunions and wedding anniversaries.

Brodie told the Journal last month that dishonest employees brought the business down, though he never pursued legal actions against them. After the foreclosure, people came and took his furniture, personal belongings, home decor and governor memorabilia. By the time the bank foreclosed, Brodie owed $500,000 on the property. The ordeal drained his family's coffers and retirement funds, he said.

Some of it — the bedrooms, the interior paint — looks good.. But there are weeds outside growing through brick pavers, exterior paint is peeling off, carpets are stained and window screens are ripped.

Sturgis auctioneer Dave Wilson started the bidding at $600,000 only to have it fall to $375,000 before someone flashed a numbered bid card.

The price was below what Home Federal Bank wanted to sell it for, Wilson said. Wilson, at the new owner's request, declined to name the buyer or the final price.

But a man who identified himself only as Bill confirmed after the auction that he was the highest bidder. But because the high bid was lower than the minimum the bank wanted to accept, the high bidder had to negotiate a price with the bank to finalize the sale. The final price was not disclosed.

Bill, who lives in Arizona, said he's originally from South Dakota and has ranching interests in the region here.

"I got a big family," he said, adding: "We grew up here and so we're thinking about moving back."

Mansion by the numbers ...

Dale Wileman looks through a property description book before the start of Thursday's auction at the Old Governor's Mansion. The auction was closed after a bid of $410,000.

Auctioneer Dave Wilson with Sturgis Real Estate entices the crowd with a lower bid during the auction of the Old Governor's Mansion in 2013.

Weeds cover a patio outside the Old Governor's Mansion. An auction was held Thursday for the home that has housed 16 South Dakota governors.

Auction spectators tour the grounds of the Old Governor's Mansion before bidding opened on Thursday.