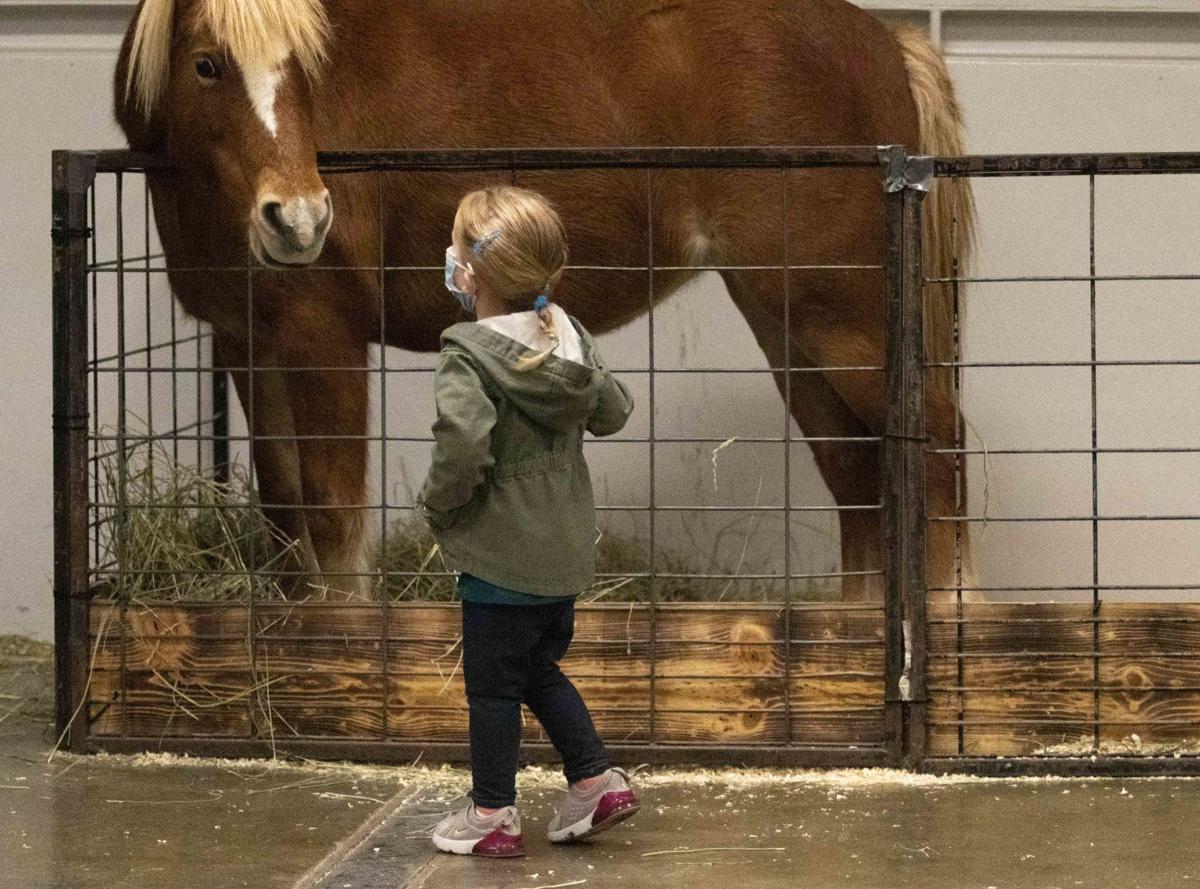 Local Emilia Rohrback, 2, looks up at a miniature horse at the Black Hills Stock Show on Monday at the Rushmore Plaza Civic Center. 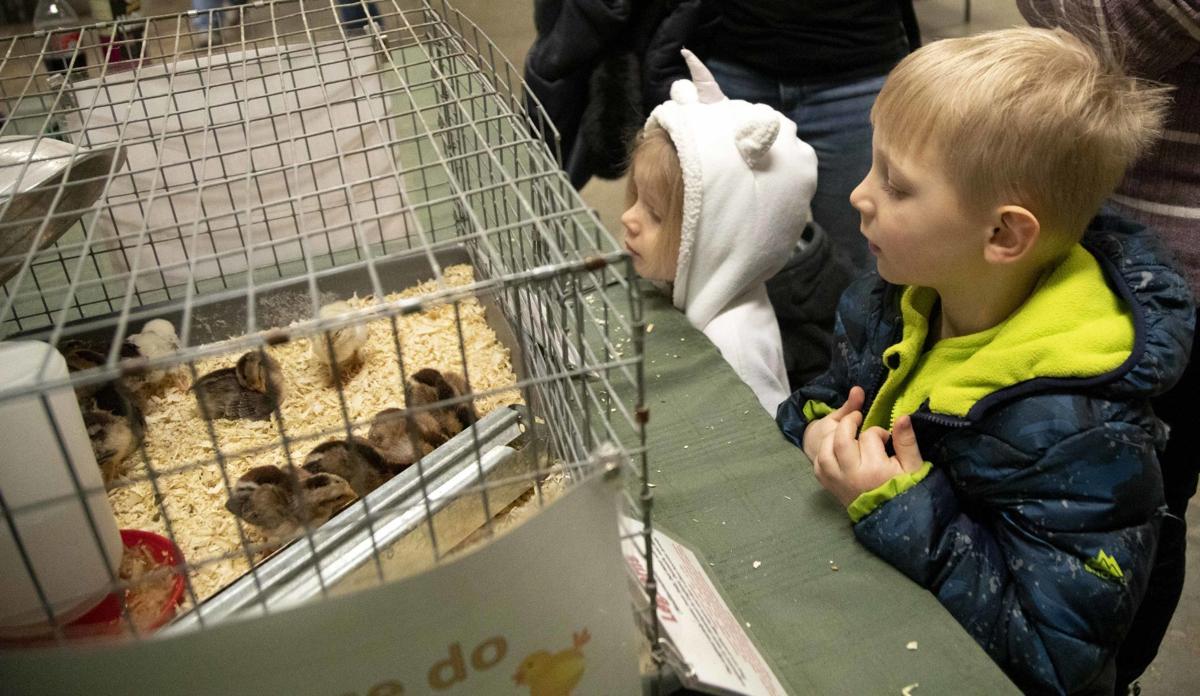 Jet Singrey, 5, and Octavia Singrey, 3, of Sioux Falls look at chicks at the Black Hills Stock Show on Monday at the Rushmore Plaza Civic Center. 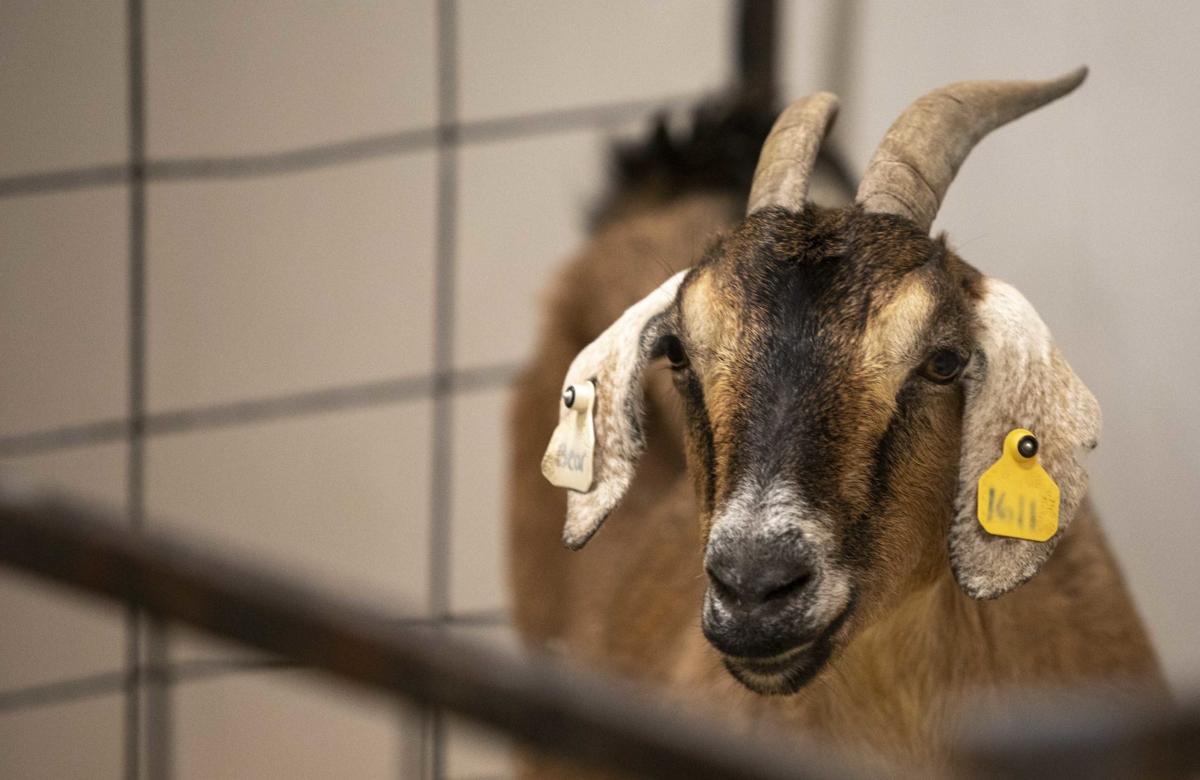 A goat looks out from her pen at the First Interstate Bank Petting Zoo.

A lifelong love of farm animals and educating children about them is a passion for Theresa Derr.

For close to 20 years, Derr has coordinated the petting zoo at the Black Hills Stock Show, bringing docile and small animals to Rushmore Hall. She also organizes the petting zoo for the Central States Fair.

"I've shown sheep and cattle since I was a kid, and the public likes it," she said as she was tending to a miniature horse on Monday.

Derr has served as a 4-H agent, and was an agricultural educator at Stevens High School and involved with Future Farmers of America. Above each of the animal pens at the petting zoo, Derr has placed signs that show educational information about the breed, facts about where the animals come from, and basic care for each animal.

"One of the things I hope people learn is some of the common sense that comes from being around animals," she said. "You treat animals the way you treat humans. You don't abuse them, you don't tease them. That's the utmost... So many of the kids and parents can learn from not only seeing how these animals are cared for, but also learn about life in rural areas surrounded by the animals."

Derr said bringing agriculture education to more urban areas like Rapid City is important for the public to learn and understand how vital agriculture is to the environment and the economy. She hopes the petting zoo in combination with the Black Hills Stock Show are both ways to teach that importance.

"The more they understand about the ag industry and the animals and the livelihood of animals, the more respect they will have for the world of agriculture — what our farmers and ranchers do," Derr said. "We in the ag industry need all the help we can get and the support of what we do, because there's always those critics out there. It's important that they know what we do is not abusive to the animals, it's not abusive to the land. It's actually helping it."

There is no admission charge for the petting zoo, but there is a donation box for another cause that Derr is passionate about — taking care of military veterans when they come home from active duty.

In 2012, the Sergeant Colton Levi Derr Foundation was established in memory of her son. Colton suffered from post traumatic stress disorder following his combat tours in Iraq and Afghanistan. During Operation Iraqi Freedom and Operation Enduring Freedom, Colton completed over 500 combat missions with the U.S. Army, First Division.

Colton succumbed to suicide within six weeks of arriving stateside from his Afghanistan deployment. He died on April 28, 2012.

The Derr family formed the nonprofit foundation in his name to honor Colton by helping other veterans and soldiers who battle PTSD and traumatic brain injuries.

Donations to the Sergeant Colton Levi Derr Foundation can be made at the petting zoo during the Black Hills Stock Show, or online at sergentderrfoundation.org.

Your Two Cents for Sept. 14

Congratulations to the Black Hills Powwow for using good common sense by cancelling due to COVID concerns.

Local Emilia Rohrback, 2, looks up at a miniature horse at the Black Hills Stock Show on Monday at the Rushmore Plaza Civic Center.

Jet Singrey, 5, and Octavia Singrey, 3, of Sioux Falls look at chicks at the Black Hills Stock Show on Monday at the Rushmore Plaza Civic Center.

A goat looks out from her pen at the First Interstate Bank Petting Zoo.