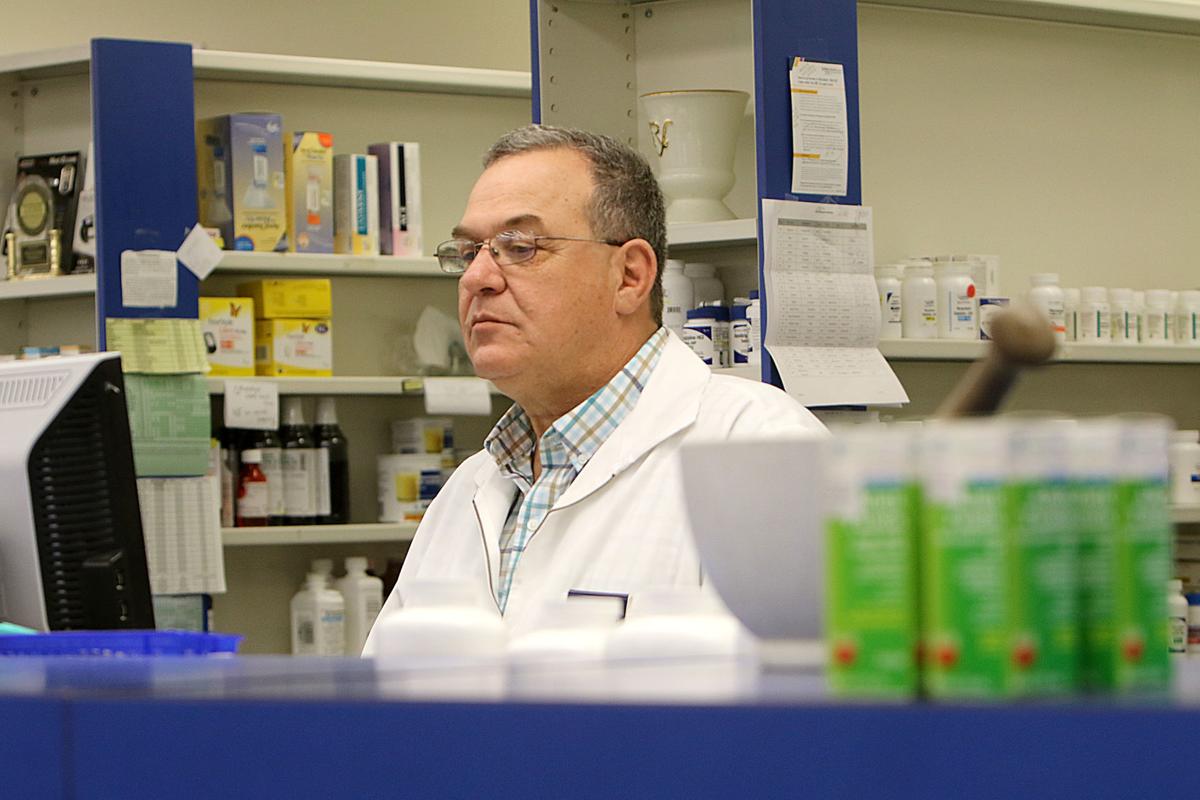 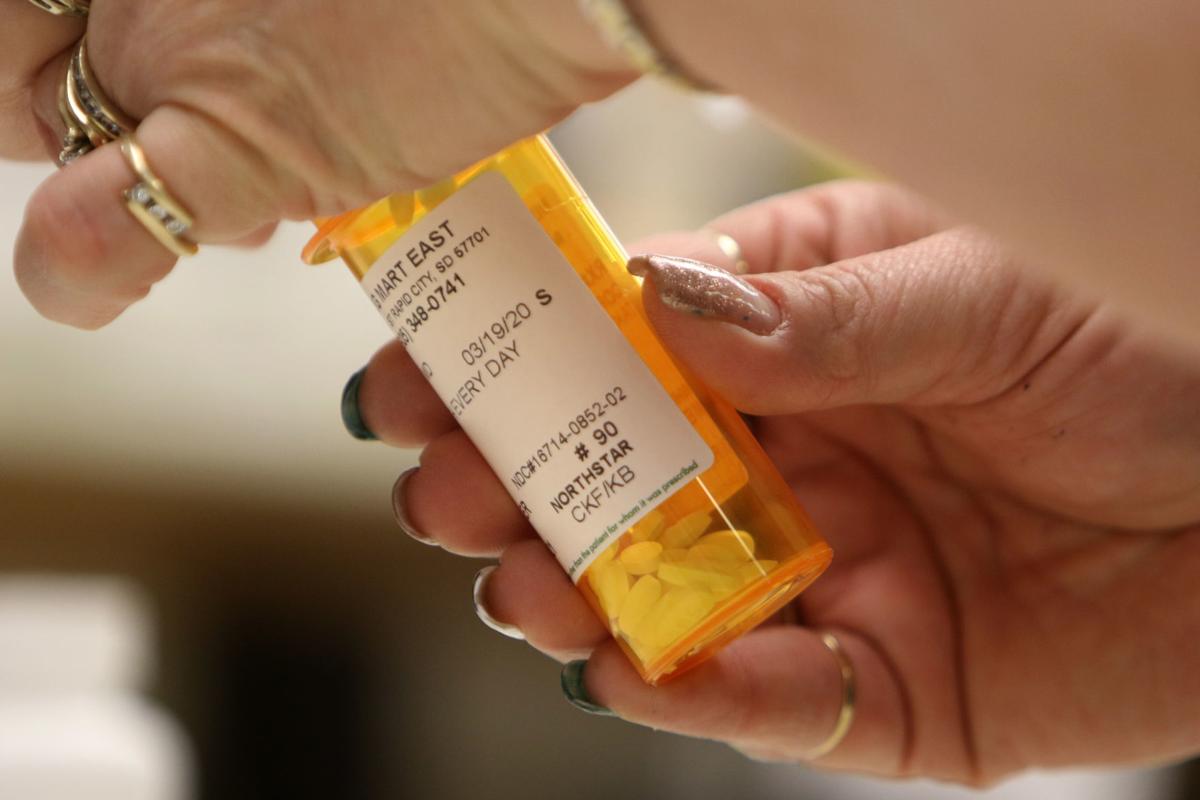 The pharmacies at Boyds Drug Mart in Rapid City now offer curbside service to customers who are sick or prefer to not go into the store to pick up their prescriptions. The service is new to Boyds and was implemented with the outbreak of the COVID-19 virus across the U.S. 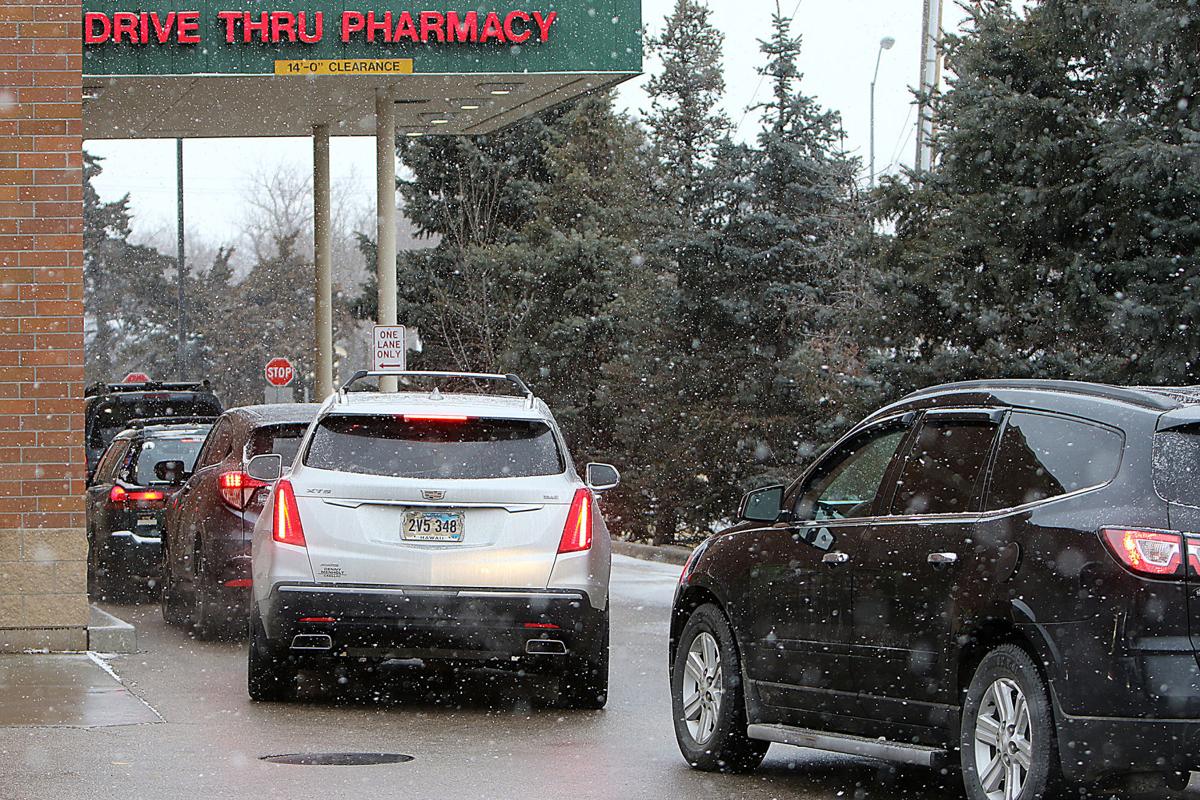 Customers wait in the drive-through to pick up their prescriptions at the Walgreens on Mount Rushmore Road in Rapid City on Thursday.

Rapid City pharmacies are open and preparing for the challenges ahead as the coronavirus continues spreading nationwide.

Monument Health is making contingency plans to keep patients and staff safe when coronavirus cases increase in the region.

He urged customers at all local pharmacies to talk to their pharmacists if they have concerns about medication. Peterson believes at some point there could be shortages of medications used by health care facilities, prescription medications and over-the-counter medications because of COVID-19, especially in medicines that are produced in other nations.

“I don’t think there are any acute shortages the public should be concerned about. I do know some insurance companies and pharmacy benefit managers have loosened early refill (policies) to allow patients to get prescriptions sooner than normal. Normally, a person can’t refill a prescription until 75 to 80% of the drug is used up. Loosened restrictions would allow patients to fill prescriptions early to prepare a little bit better for anything that might come,” Peterson said.

He does not advocate hoarding medicine by trying to get more than a three-month supply. Peterson does recommend that people make sure to keep their medications well organized.

Medications typically have expiration dates of one to three years out, Peterson said.

“When medications expire it’s not like they’re useless the day they expire. Medications, especially tablets and capsules, are extremely stable and maintain their potency for a long time,” he said.

In light of COVID-19, Peterson said the South Dakota Board of Pharmacy issued a statement Wednesday to pharmacies. The board said in emergency situations when patients run out of prescription refills and cannot visit their physician right away, a pharmacy can dispense a limited-day supply until a patient obtains a new prescription. This ruling only applies to non-controlled substances.

In the event that COVID-19 forces clinics to close and/or hospitals to restrict visitors, Monument may offer pharmacy deliveries patients can pick up at the hospital’s front door or curbside, Peterson said.

“I think it’s important that people know we are preparing. I’ve been talking to other pharmacists and they’re preparing the same way,” he said.

Monument is preparing for staff and hospital patient safety as well. If necessary, some pharmacy staff might work remotely as much as possible — though Peterson emphasized filling prescriptions and labeling medicine bottles cannot be done outside the pharmacy. The ultimate goal would be to limit the number of staff members who are in the pharmacy, he said.

Dana Darger manages Monument’s in-patient pharmacy. The pharmacy is looking at ways to efficiently use its resources so it’s better prepared in case of shortages.

The in-patient pharmacy does sterile compounding of medicines for IV use and therefore staff members use many masks and gowns. New guidelines from the national governing body of United States pharmacies is advising they can use washable cloth masks and lab coats, Darger said.

“We’re going to implement those changes on Monday to try to preserve masks and gowns for (staff who provide) direct patient care,” Darger said. “When we work in the IV room, it’s about making sure the products we make are sterile. We’re trying to protect the product from us.”

Darger anticipates drug shortages before the COVID-19 pandemic is under control, he said.

For customer safety and convenience at the Medicine Shoppe, free home delivery service in Rapid City has been supplemented by added curbside pickup for prescriptions.

“If somebody is ill, they can give us a call and we will bring the medicine to their car,” said Curt Rising, Pharm.D and owner of The Medicine Shoppe. “We ask that if somebody is sick to try to use our curbside service.”

“Pharmacies are on the front line,” Rising said. “There are two places that are usually open when everything else is closed, and that’s the pharmacies and the grocery stores. We have to provide services to our patients who are ill. That is our job and that is our calling.”

Rising said the coronavirus has the potential to turn into a health crisis like “something we’ve never seen before.” However, right now he said he is not seeing medication shortages. The Medicine Shoppe has increased its inventory and is able to get most medications from its wholesaler.

The Medicine Shoppe is maintaining its regular business hours, and it’s experienced a demand for over-the-counter items such as hand sanitizer and Tylenol, Rising said. The pharmacy is stepping in to fill the need for hand sanitizer by making its own.

“The hardest part is getting isopropyl alcohol,” Rising said. “A lot of people are buying that up. We’re trying to source some from one of our … manufacturers.”

Meanwhile, Rising urges everyone to wash their hands and be very aware of the importance and need for social distancing.

“Everything rolls the same as it always has. … Over the course of a year, there are many items that can be shorted but for a few weeks at most. I really don’t anticipate us having any shortages,” Fortier said.

Boyd’s customers have stocked up on “anything containing zinc that’s used for viruses,” along with aloe vera gel, Clorox wipes, soap, distilled water, pain relievers and other health care and cleaning supplies.

“People are amazingly cooperative and that’s a credit to where we live. I don’t think western South Dakota will experience the hysteria to the level that’s hit cities,” he said.

Boyd’s has a delivery service that is getting somewhat busier, he said. He is grateful people are being cautious about going out in public, especially if they’re ill.

“A lot of people aren’t coming in (if they have) a cough. A family member comes in and picks it up,” Fortier said.

Boyd’s announced on its Facebook page that starting Saturday, March 20, the Baken Park location will have shorter hours.

Fortier said customers can continue to depend on Boyd’s pharmacies.

“We have no intentions of closing the drug store as it’s probably primary in care (for many people),” he said.

Safeway’s pharmacy has seen an uptick in prescription refills, more demand for flu and pneumonia shots, and demand for pain relievers and cough medicines, according to Nikki Price. She is the director of pharmacy operations for 112 Safeway stores in a five-state area that includes South Dakota.

“Some people are asking for a 90-day supply (of their prescriptions) and we’re accommodating that if their doctor allows it,” Price said. “We’re not encouraging people to stockpile medications. When we have the stockpiling, that is putting a strain on the supply. There is no strain on the supply now.”

“We’re basically business as normal for us in terms of if we’re out of something we’re going to reorder it based on what’s available to us,” she said.

In addition to Safeway’s grocery pickup and delivery services, Safeway has a pharmacy delivery service and a mail-out service for people who may not want to go out in public, or who can’t because they’re sick. Until May 1, both of those services are free, Price said.

Target is served by CVS pharmacy, which also offers free prescription delivery. However, according to the CVS website, “Due to high demand, we’re experiencing delayed deliveries and low stock on many store items. We’re working hard to make more inventory available.”

The pharmacies at Boyds Drug Mart in Rapid City now offer curbside service to customers who are sick or prefer to not go into the store to pick up their prescriptions. The service is new to Boyds and was implemented with the outbreak of the COVID-19 virus across the U.S.

Customers wait in the drive-through to pick up their prescriptions at the Walgreens on Mount Rushmore Road in Rapid City on Thursday.