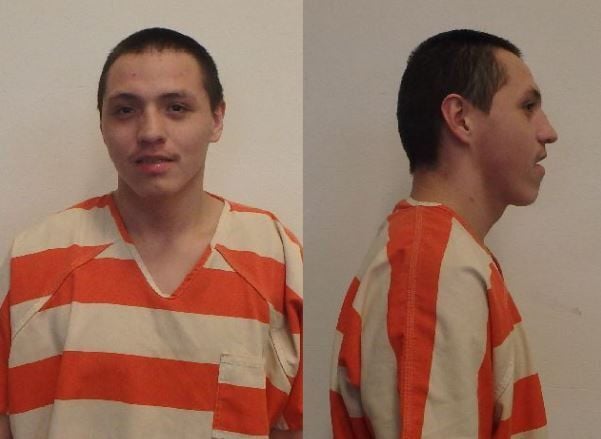 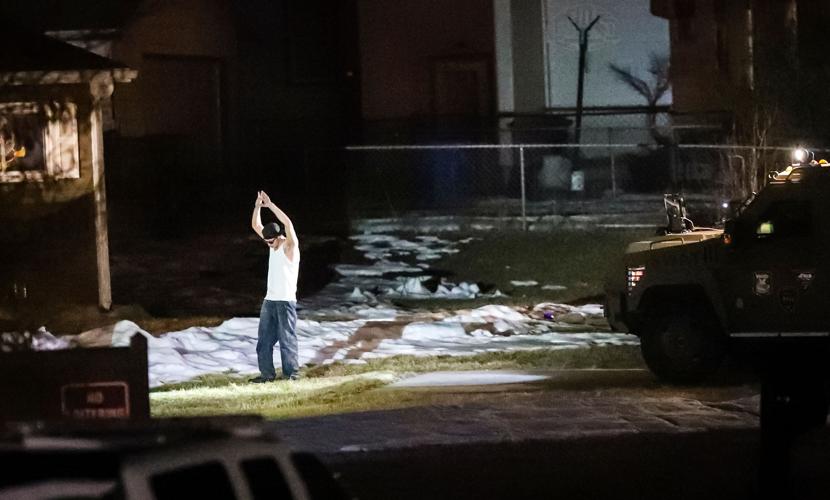 Murder suspect Colton Bagola exits a Rapid City house with his hands in the air after a short standoff in December 2019.

A federal jury on Friday found a Pine Ridge man guilty of first-degree murder and discharge of a firearm during the commission of a crime of violence for shooting a man in the back of the head.

Before shooting Sloane Bull Bear, 30, Colton Bagola, 29, told someone he "needed to take a soul," according to an affidavit supporting his arrest. The murder charge carries a mandatory life sentence and/or a $250,000 fine.

According to Journal archives, a woman called 911 and said people had gathered at an apartment in Pine Ridge to drink.

She said she and Bull Bear arrived just after midnight, and Bagola and a man she didn't know arrived 10 to 15 minutes later. She said Bagola kept staring at her, and Bull Bear asked if she was ready to leave.

She said she heard a "pop" as they walked out the door and Bull Bear ended up on the ground, snoring. She said she saw Bagola and another man run away from the apartment, and she left to go to a friend's house. She said the resident of the apartment where Bull Bear was shot was also at this friend's house, and he told her that Bagola had told him he had a .38 caliber handgun and was "wanting to kill somebody."

The woman told the FBI agent that she called 911 at 1:28 a.m. but the call didn't go through. She called back at 3:39 a.m. When the agent asked why she waited two more hours to call back, she said other people at the party were scrambling around looking for their things. The agent asked if they were looking for "dope" and the woman said she hadn't seen any, but it's possible.

On Dec. 18, 2019 an Oglala Sioux police officer called the FBI agent to tell him that one of Bagola's relatives told him that another relative said that Bagola was sleeping on her couch at the 300 block of Curtis Avenue in Rapid City. A relative told another agent that Bagola had left to get food with his girlfriend and hadn't returned to the home, and that the girlfriend said she was with Bagola the night of the shooting.

On Dec. 20, 2019 the FBI agent learned the apartment resident had been arrested by Oglala Sioux police. The man told the agent that Bagola was the one who shot Bull Bear. He said Bagola put a silver revolver on a table, was acting weird, said he "needed to take a soul," and listed the people he could kill. Bagola then left but returned with the unknown man after Bull Bear and the woman arrived.

The man said after Bull Bear got up to leave, Bagola "whipped" out a gun and shot Bull Bear, who slumped over and started bleeding. He said he and the woman then got into Bull Bear's car and drove to Oglala where they tried to call 911. He said the call didn't go through so they went to their friend's home in Pine Ridge, where the woman called 911 again.

Later that day, the FBI agent interviewed the man who allegedly ran from the home with Bagola. The man said he had his head down when Bull Bear got up to leave but he heard the gun go off, saw Bull Bear on the ground, and saw Bagola run with a gun. The man said he went to an "old folks" home before going to his girlfriend's home. He also mentioned that Bagola would often pull out and play with his silver gun.

The FBI agent then had his arrest warrant signed by a judge, the Rapid City Police/Pennington County Sheriff's Special Response Team surrounded the Curtis Street home and Bagola surrendered.

The court ordered a pre-sentence investigation, but a sentencing date has not been set for Bagola.

Murder suspect Colton Bagola exits a Rapid City house with his hands in the air after a short standoff in December 2019.