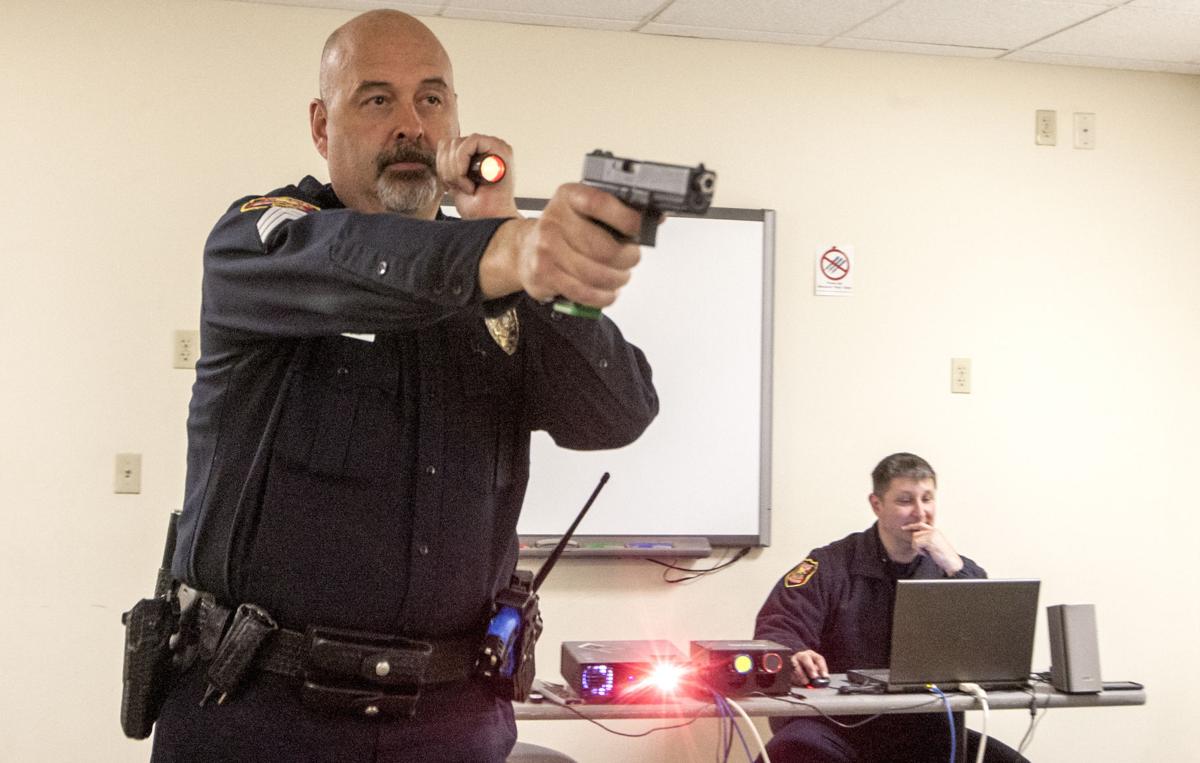 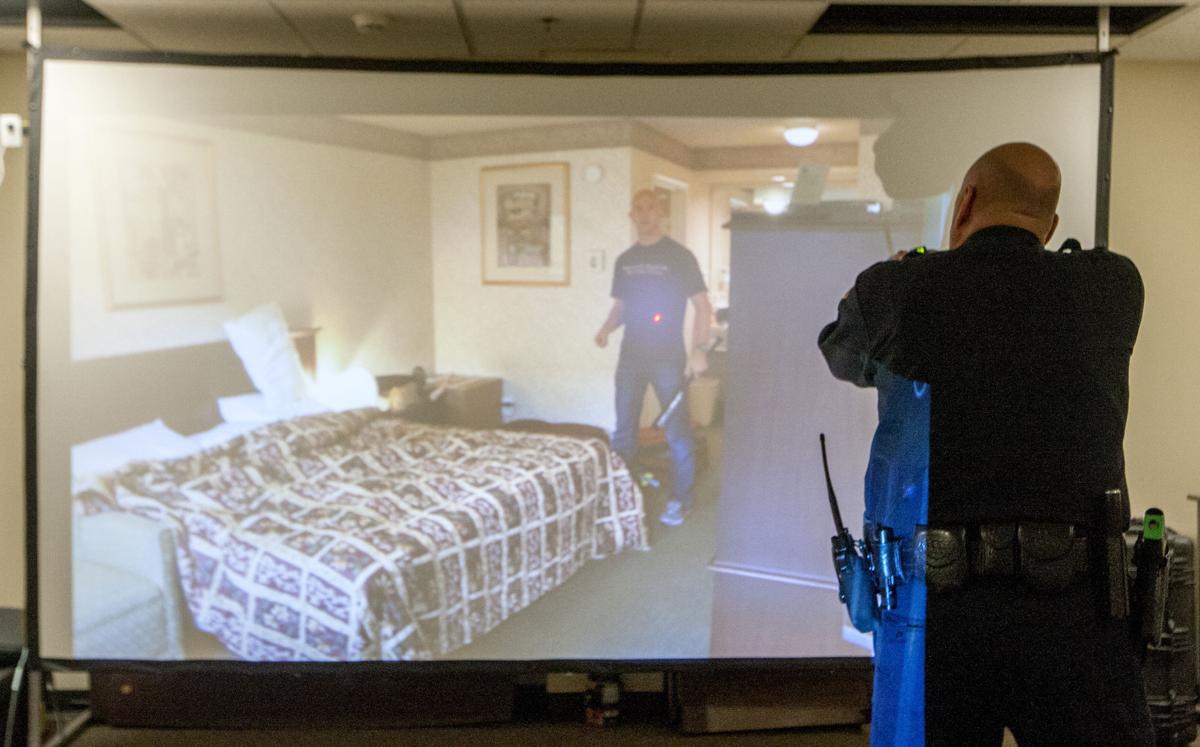 Sgt. Wayne Asscherick uses a laser-enabled taser to target a domestic abuse suspect during a training simulation on the MILO Range at the police department on Thursday. 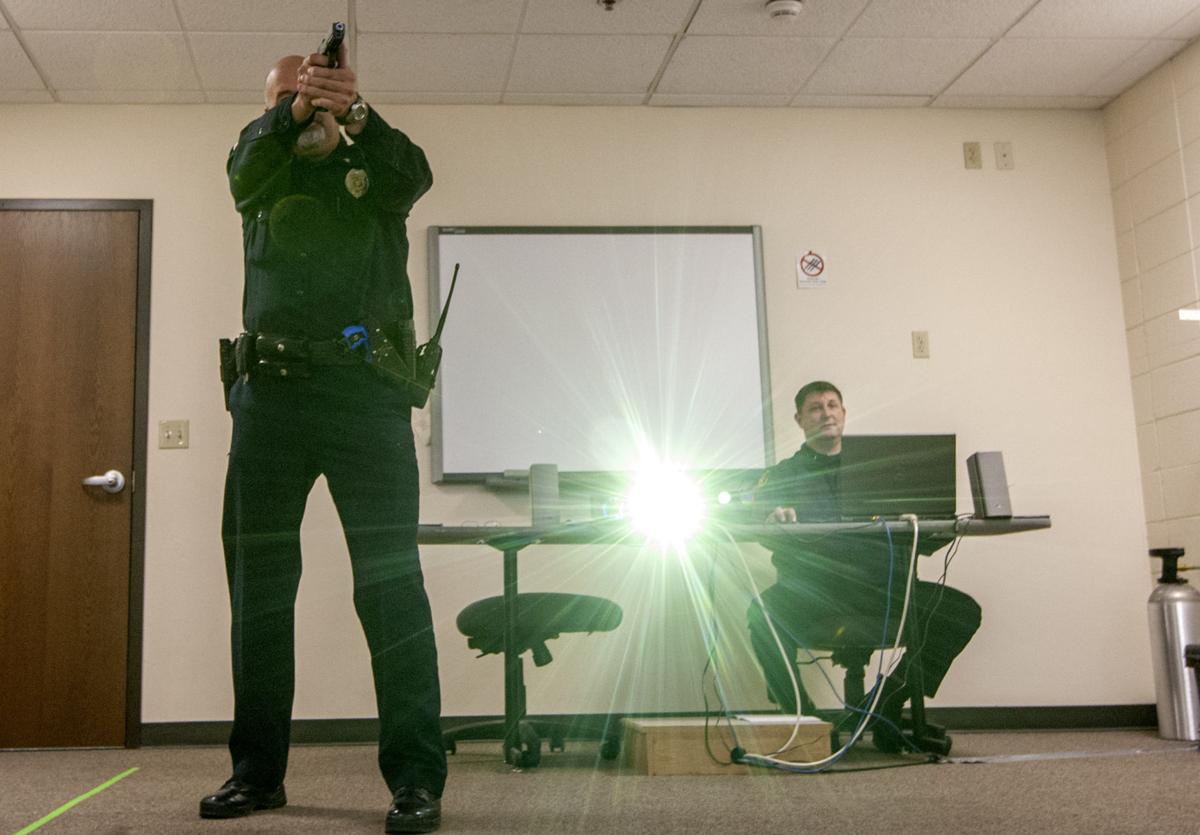 Sgt. Wayne Asscherick uses a laser-enabled handgun to shoot at an active shooter in a training simulation on the MILO Range at the police department on Thursday.

The person holding the bat is a tall, bald white man standing over a crying girl inside a motel room.

“What are you doing here?” he asks.

The suspect refuses and instead raises the bat over his shoulders. With the girl's life in danger, Asscherick makes the split-second decision to use force, and empties his handgun into the man's torso.

The scenario that unfolded Thursday at the Rapid City Police Department is part of the MILO Range training program. The interactive video exercise is designed to prepare officers for similar encounters on the street and help them know when to use force.

MILO Range technology, short for Multiple Interactive Learning Objectives, has been a part of the RCPD use of force training program since last summer.

“(It’s) a wide variety of exercises and simulations we can put officers through,” Lt. Scott Sitts said after watching Asscherick go through the exercise. “You can really dive into some decisions and proper use of force.”

As part of the technology, Sitts, the commanding officer in charge of the firearms team, uses his laptop to alter the suspect's actions, depending on the officer’s handling of the situation.

With Sitts at the controls, Asscherick runs through a second exercise. This time the suspect drops the bat. In another exercise, Asscherick is forced to use his taser.

The goal of the program, Sitts said, is to train officers what to consider and analyze when making split-second, life-changing decisions.

“What are you thinking right now?” he asks officers. “What should you be seeing? What did you notice? What are your different options?”

Every RCPD officer goes through some degree of MILO training, with an emphasis on use-of-force training. They practice in front of a large projection screen, armed with tasers, pepper spray bottles, flashlights and old guns converted and retrofitted with CO2 packed magazines to simulate the recoil from a real gunshot.

The weapons aren’t real — the only things they shoot are lasers at the projector — but the pressure and consequences of their decisions are.

How police use lethal force has been a hot topic around the country in recent years, following incidents in cities such as Ferguson, Mo., Baltimore and Staten Island, N.Y., that sparked protests and led some law enforcement agencies to re-examine their policies.

Sitts and RCPD spokesman Brendyn Medina said those events have affected police departments nationwide, but had no impact on the RCPD’s pursuit of the MILO technology.

“I think we train heavily in use of force because it has a lot of serious consequences based on what an officer decides to use for use of force, not only for that officer, but for the individual they’re using the force on,” Sitts said.

“If you look at other recent big events in communities, let’s throw Ferguson out there, you can see how one officer’s actions can impact not only one community but communities and law enforcement agencies across the nation.”

Sitts said the department spends more time training on use of force than any other area of policing. Officers go through firearms and active shooter training, including live action scenario training in tandem with the Pennington County Sheriff’s Office, which also uses the MILO technology.

Live scenario training is typically conducted at Ellsworth Air Force base, and takes a lot of planning and inter-department coordination, Sitts said. MILO gives officers the opportunity to train whenever they have free time.

“(MILO) would just be a bonus to all of that,” Sitts said. “If you want to run officers through a quick couple scenarios, you can pull up here instead of going down and blowing through a box of ammunition.”

Asscherick said a simple run through of a couple videos can make a big difference in how officers respond to real-world incidents.

According to the police department's Rules and Procedures handbook, lethal force is a sufficient response only if the officer believes that “if they do not act immediately to stop the subject, the officer or a third person will die or suffer serious bodily injury.”

Sitts said there was a simpler way to look at it: "Our use of force right now is based on reasonable and necessary use of force,” he said. “Was the force necessary? If it was necessary, was the amount of force you used reasonable?”

Sitts and Medina said the department keeps an eye on nationwide trends to ensure their rules and procedures are up to date.

Asscherick added that the local community also has a say on the matter.

“I think the community drives some of that too, with what is acceptable within this community,” he said. “What does the community think is appropriate for us to do, because we are their law enforcement agency.”

It’s harder to kill in the midst of aggressive chaos.

Sgt. Wayne Asscherick uses a laser-enabled taser to target a domestic abuse suspect during a training simulation on the MILO Range at the police department on Thursday.

Sgt. Wayne Asscherick uses a laser-enabled handgun to shoot at an active shooter in a training simulation on the MILO Range at the police department on Thursday.