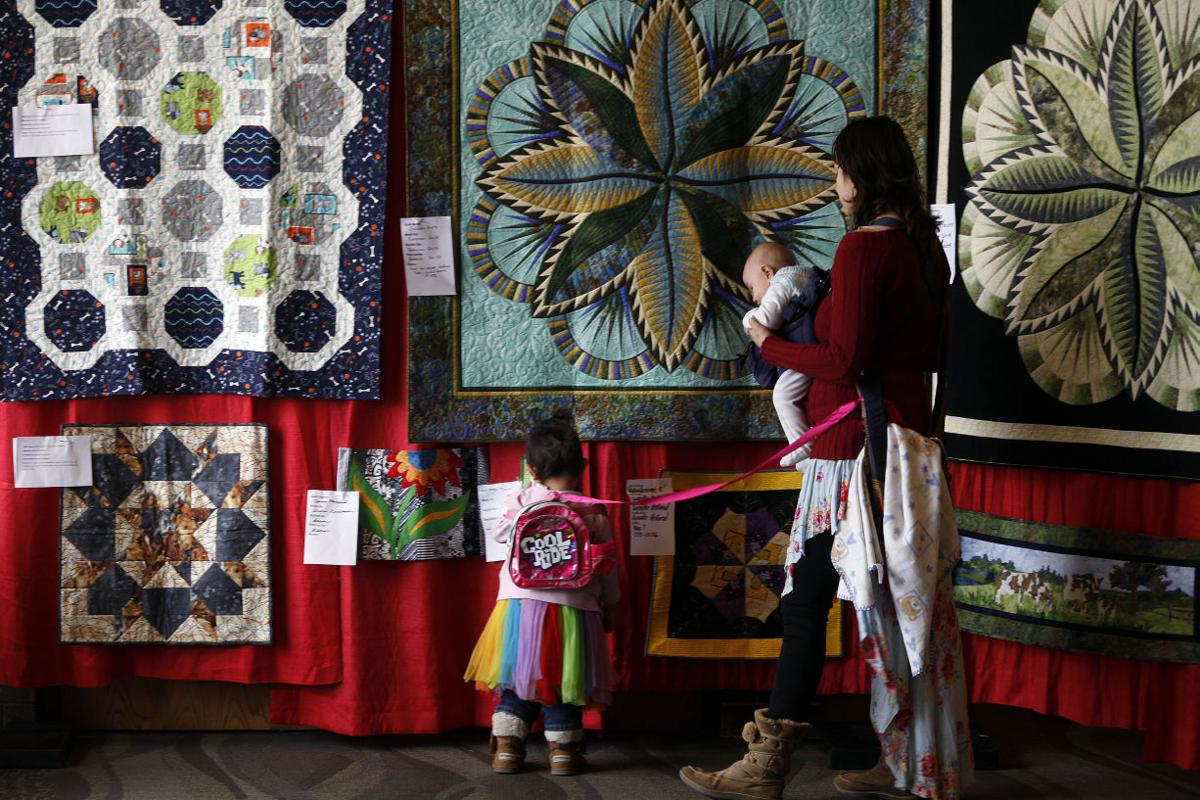 Just as they would in any art gallery, Tanya Sanchez and her children, Valentina and Alphonse, look over some of the quilts on display Monday at the Quilt Show at the Black Hills Stock Show & Rodeo. The display concludes today. 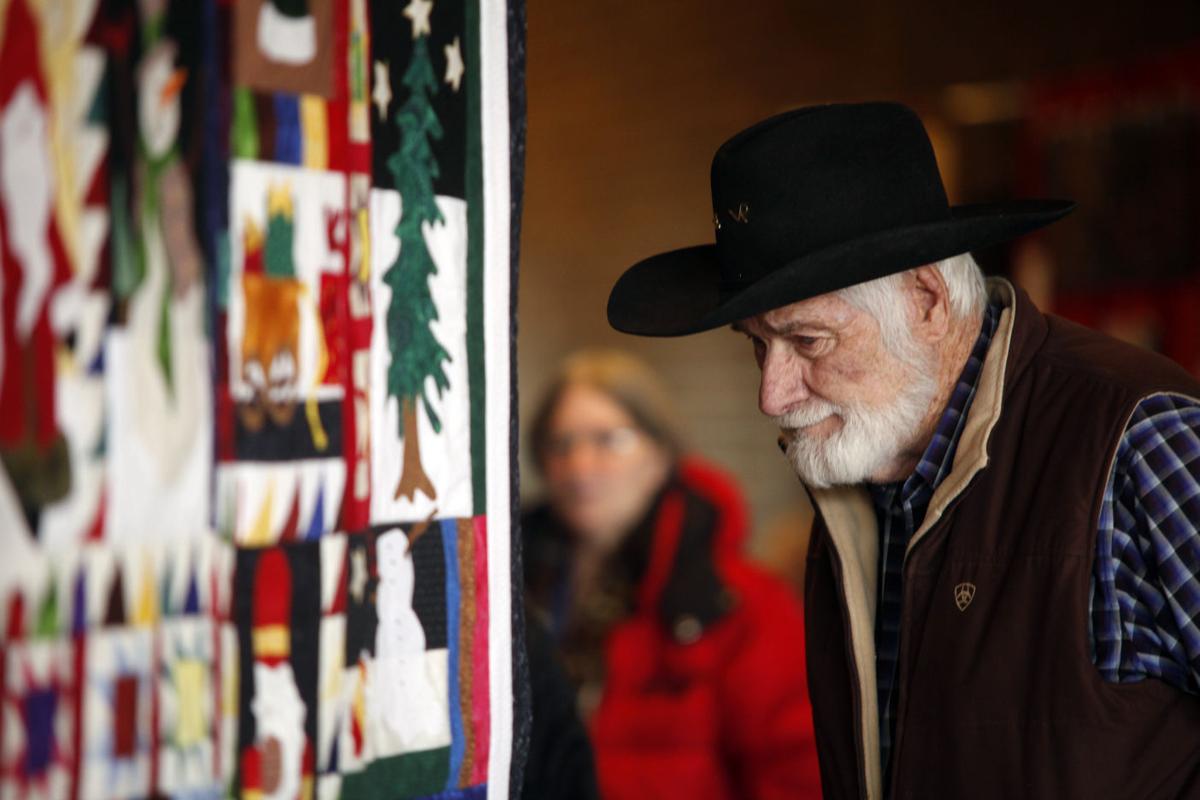 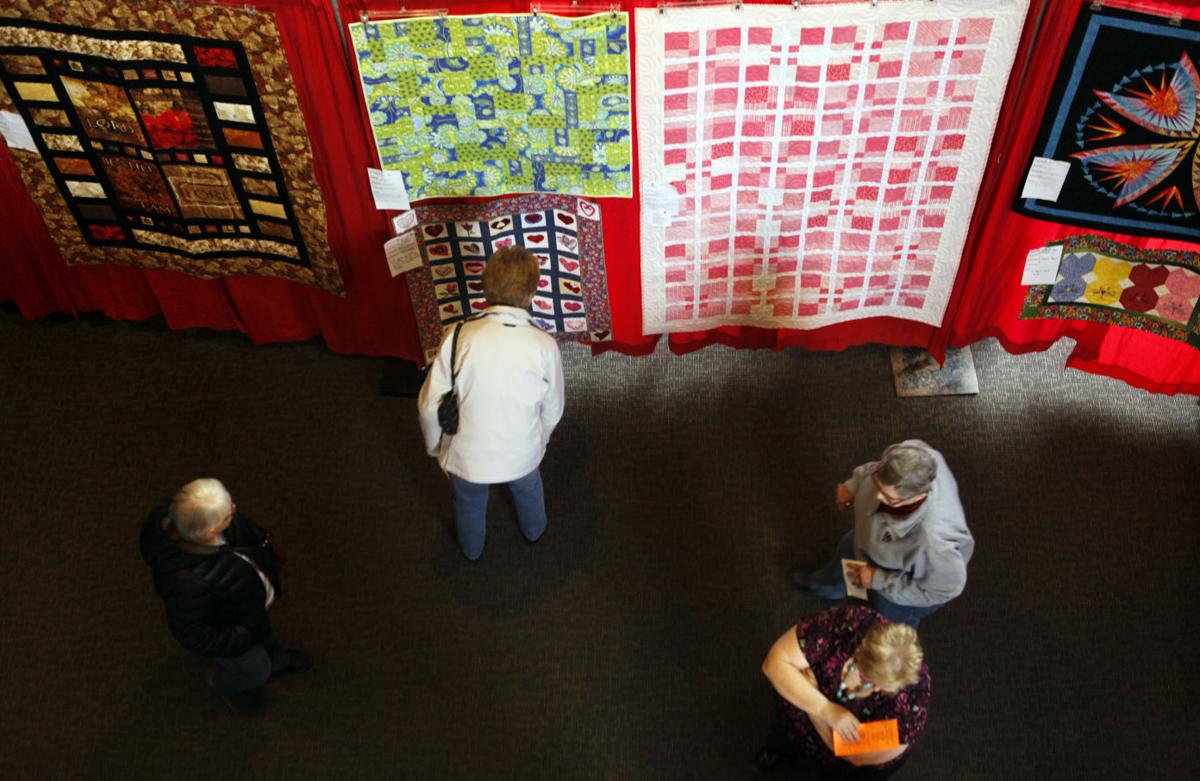 Black Hills Stock Show & Rodeo attendees look at some of the quilts on display Monday morning in the theater lobby at the Rushmore Plaza Civic Center.

It's a question any novice might ask of a master — in this case regarding quilts.

"So, what makes quilting cool?" was the rookie's request about the quilt show being held during the Black Hills Stock Show in Rapid City on Monday.

Without missing a beat, and with obvious pride, Celia Bradley replied: "We have a simple answer for why quilting is cool. Just have a look around."

Bradley was right — in a big way.

True artistry is revealed in the few dozen quilts hanging on the walls in the corner of the theater lobby at the Rushmore Plaza Civic Center on Monday, and again today.

Bradley, who once affixed 5,602 pieces of cloth to a quilt she named "Dear Jane," has an attractive piece hanging in the current collection. It features three blue jays on branches surrounded by inlays of butterflies. She rushed over Monday to insist that "that's not my best work."

But all around her, many quilts took on the feel of a fabric art form. One piece in particular would be at home in any modern museum of art.

"Shadow Boxing" is a full-sized vertical quilt that features neon-colored  rectangles that flow through the piece, always shadowed by a black rectangle. Upon closer examination, each square or element features a unique stitching pattern or fabric flair that creates a 3-D look.

Another piece shows the ingenuity being applied to the classic form of handiwork that is increasingly becoming an art form.

In a sprawling quilt that tells a story about Route 66, or perhaps of the American fascination with cars and road travel, quilter Karen Lipp used water color paints to give the quilt segments a soft, historic feel. Three scenes of classic American roadways are surrounded by iconic signage, license plates, and scenes of an old-fashioned filling station.

"Made for my car-enthusiast husband to hang in his garage," Lipp shared with viewers in a placard on her quilt.

At the far end of the stock show display, Bradley sat on Monday afternoon with fellow quilter Janette Jackmovich, both supporters of the Black Hills Quilters Guild. The two were hosting a quilt raffle, but also were also on hand to facilitate the future of quilting.

Jackmovich said she enjoys quilting because she loves to "put together pieces of a puzzle" and see the end result, but also because of the friendships she has stitched together through her hobby.

She said some events are known as a SOYO, or Sew On Your Own, where quilters gather, furiously work on projects, and share knowledge. "It's a big retreat and it's really a lot of fun," she said.

Bradley said aid quilting appears to be on the rise as far as popularity, at least in the Midwest.

"I think it's big-time, right up there with scrap-booking," she said of the hobby that is often spread from a mother or grandmother to younger family members.

The Black Hills Quilters Guild routinely donates its efforts to charity causes, such as weaving socks for troops overseas or making blankets for people who are homeless or in need.

None of the quilts at the stock show display are for sale, just as art in most museums is not to be bartered over.

Bradley said it probably wouldn't matter anyway, because in general, as far as time and cost involved in artistic quilting, "You can't get out what you put in them."

Just as they would in any art gallery, Tanya Sanchez and her children, Valentina and Alphonse, look over some of the quilts on display Monday at the Quilt Show at the Black Hills Stock Show & Rodeo. The display concludes today.

Black Hills Stock Show & Rodeo attendees look at some of the quilts on display Monday morning in the theater lobby at the Rushmore Plaza Civic Center.