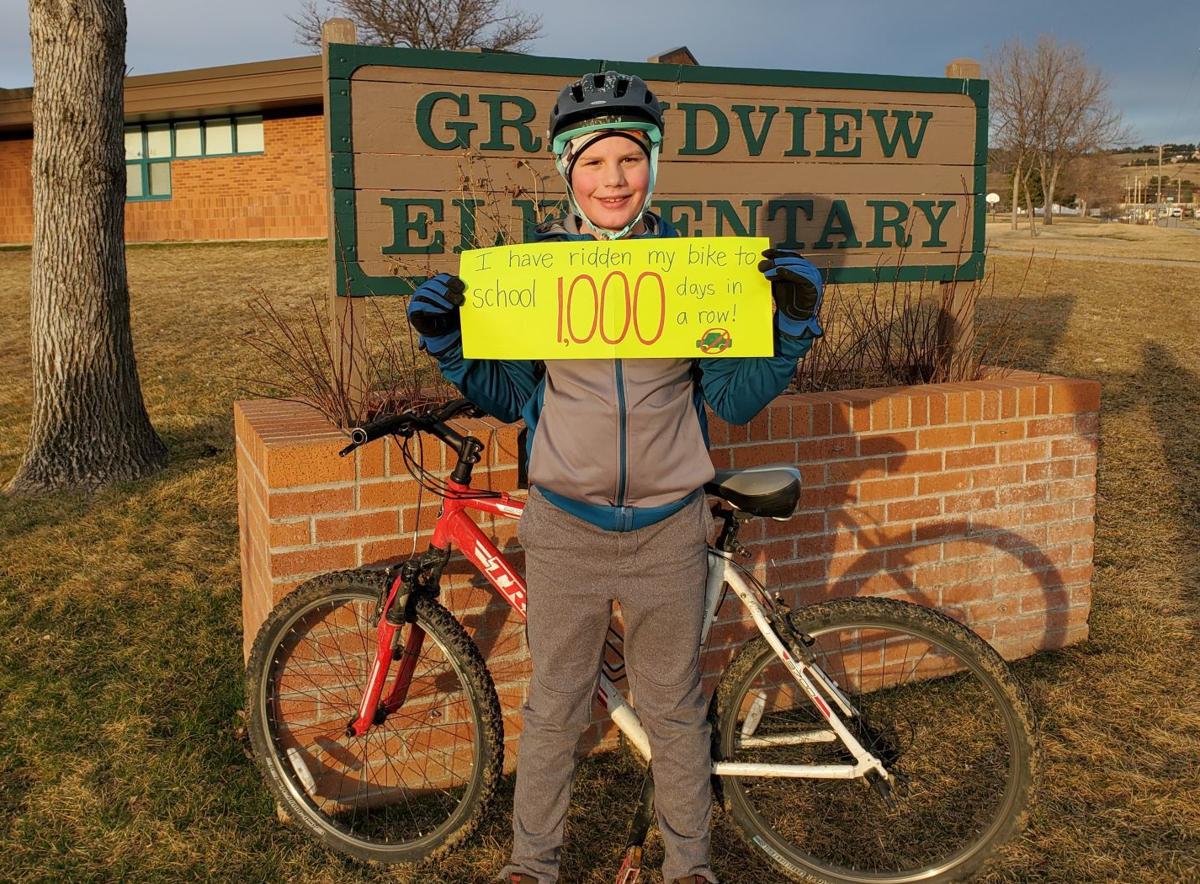 Bodhi Linde, 11, celebrates Monday after riding his bike to school for the 1,000th consecutive day. 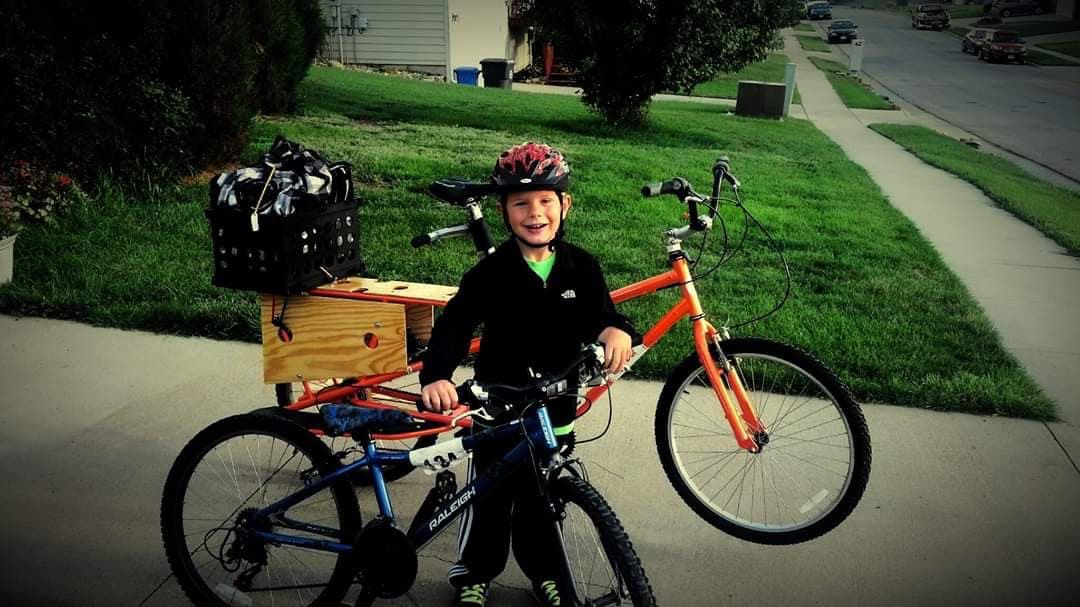 Bodhi Linde, now in fifth grade, is seen preparing to ride to kindergarten or first grade with his father. 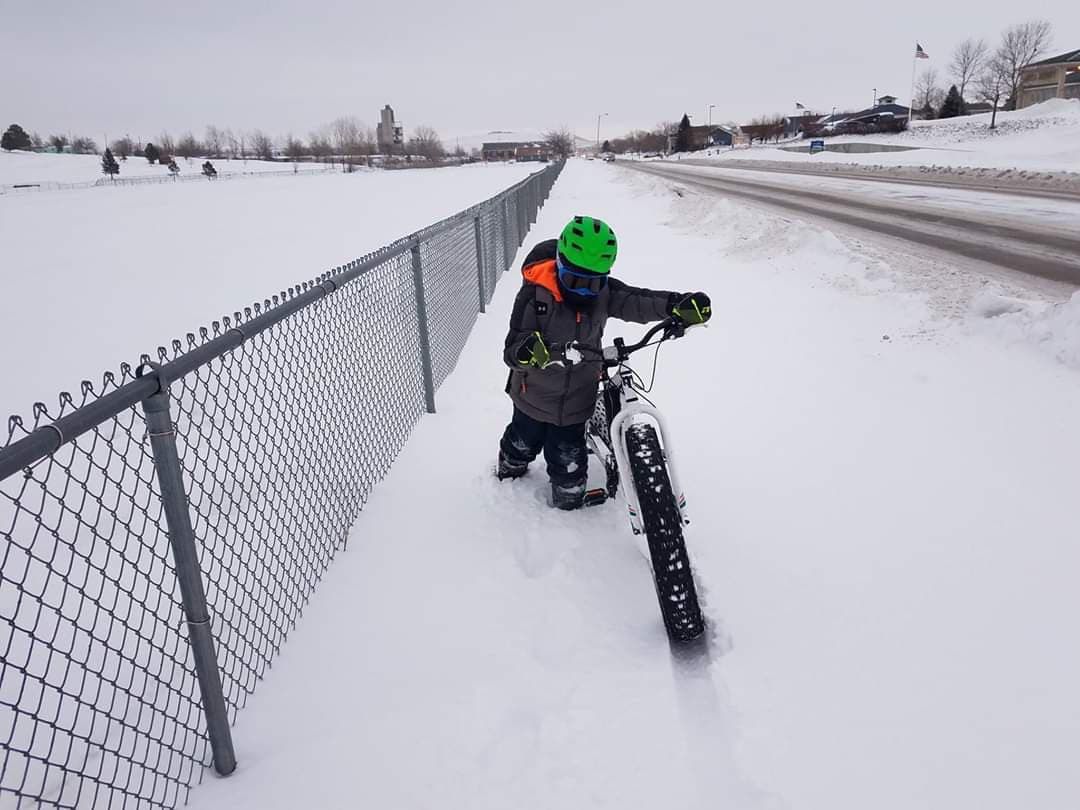 Bodhi Linde pushes his fat bike — a bike with low-pressure wide or "fat" tires that help cyclists ride in snow or sand — through the snow on his way to school last year. 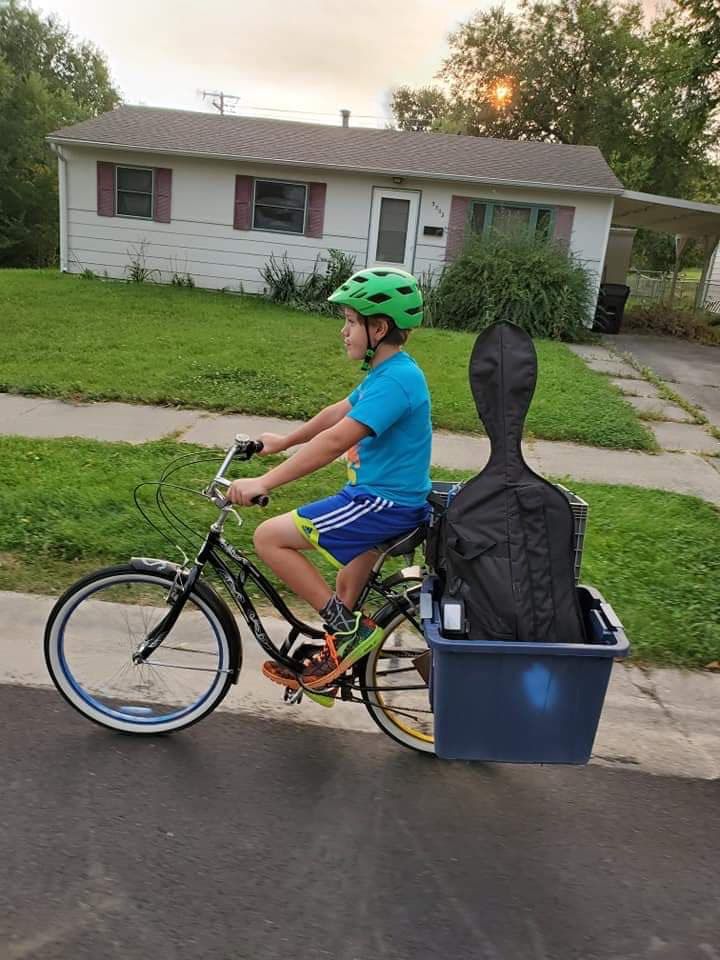 Bodhi Linde, 11, commutes to school earlier this year with his cello in tow. He now uses a bike trailer to transport his saxophone twice a week.

School closures and a global pandemic weren't going to stop a Rapid City boy from reaching his goal of riding his bike to school for 1,000 days in a row.

“Today was my 1,000th day so that's kind of a big deal,” 11-year-old Bodhi Linde, a fifth-grader at Grandview Elementary School, said Monday.

Bodhi began riding the two-mile, one-way trip to school in kindergarten with his father Dan, a paraprofessional at Central High School.

“We haven’t ridden a car once to school,” Bodhi said. “I’m doing an achievement every day.”

"I can't believe that we're at 1,000 days and he never missed a day no matter what the weather, no matter how deep the snow, the rain,” Dan added.

Dan had planned to celebrate the milestone by inviting the Rapid City cycling community to surprise Bodhi by riding with him to school on Monday. But the need for social distancing due to the coronavirus outbreak cancelled the surprise group ride.

Bodhi — joined by his parents and three-year-old brother — still made his 1,000th ride to Grandview even though he’s learning from home due to South Dakota’s school closures.

Trek, one of country’s most well-known bicycle manufacturers, emailed him a questionnaire because it wants to feature him in an upcoming catalog. The company is also sending him a free “920,” an adventure bike with built-in racks for touring on and off-road.

“We just both love riding bikes” and decided to ride to school every day in September when Bodhi was in kindergarten, Dan said.

“We weren’t ready to be done” at the end of September so we decided to keep riding until Christmas break, Dan said. “Then it just rolled from there” and the goal kept expanding until it reached the 1,000-day goal.

“I like biking because you get to see and hear and just experience the outside world so much more than when you’re riding in a car,” Bodhi said.

At first Dan would ride with Bodhi to school, Bodhi would lock up his bike and head to class, and Dan would continue his commute to Central. They would sometimes ride a tandem for fun, but usually rode on their own bikes. Dan would then pick Bodhi up by car once his after-school program was complete.

Halfway through fourth grade, Bodhi said, he began riding his bike home by himself. And at the start of fifth grade, he began commuting with his friend instead of his father.

We meet at a “certain arranged time” at the bottom of a hill before biking to school together, Bodhi said.

Bodhi said the “pretty hilly” commute usually takes them 10 minutes, but his records are about nine minutes on the way to school and about eight minutes returning home.

Twice a week, Bodhi hauls not just his backpack but a cello and saxophone. At first he carried them in makeshift carriers attached to the side of his bike but now uses a more formal trailer.

Bodhi said his family often commute by bike during the weekends and summers, too.

He recalled biking to Walmart on Black Friday despite there being “pure ice” on the roads. Bodhi said they used studded tires that help the bike grip the ice and prevent slipping and sliding.

“Even on snow days (when school is cancelled) we try to ride somewhere,” Bodhi said.

Bodhi also enters triathlons and mountain bike races. When he was nine, he said, he became the youngest person to complete the Dakota Five-O, a 50-mile mountain biking race in the Northern Hills.

“It’s a big goal for me ... kind of a mindset thing” Bodhi said when asked how he motivates himself to ride to school each day, even when it’s freezing, raining or snowing outside. “I really just enjoy riding my bike, too.”

Bodhi said he decides what to wear by checking the temperature and wind and walking outside to feel the conditions for himself.

“It’s kind of tough to find the medium there,” Bodhi said of regulating his temperature while biking. “Because it’s a very fine line between (getting too) hot and cold.”

Bodhi said he wears mittens and a balaclava, plus ski shoes, goggles and helmet to keep warm during the coldest days. He has waterproof snow pants and a rain jacket for rain and snow. And he has a fat bike with studded tires for snowy and icy conditions.

Bodhi also has lights and a reflective vest for dark commutes.

“We try to be pretty high visibility, but we don’t go overboard” since we are biking on a sidewalk through a neighborhood and away from busy roads, he said.

Still, Bodhi said, he’s had to slam on his brakes a few times to avoid crashing into cars backing out of driveways “like anyone would with 1,000 days” of biking.

Bodhi said he suggests other children interested in biking begin by writing down short-term goals and then move up to longer-term ones.

As for his next goal, Bodhi said, he wants to keep riding every day through middle school. He said he’s not sure if he can do the same in high school since it would be hard to make the seven-mile commute during the winter. He said it might be possible if he got an e-bike, a bicycle that helps riders pedal with a small motor.

Bodhi also wants to put his Trek 920 to work by completing a multi-day trip across the state.

Dan said that he hopes Bodhi’s story reminds drivers to look out for children and other cyclists riding on sidewalks, roads and through crosswalks.

“I’m super proud of him,” Dan said. “Bicycles are great transportation. We don’t always need to be in our cars.”

Bodhi Linde, 11, celebrates Monday after riding his bike to school for the 1,000th consecutive day.

Bodhi Linde, now in fifth grade, is seen preparing to ride to kindergarten or first grade with his father.

Bodhi Linde pushes his fat bike — a bike with low-pressure wide or "fat" tires that help cyclists ride in snow or sand — through the snow on his way to school last year.

Bodhi Linde, 11, commutes to school earlier this year with his cello in tow. He now uses a bike trailer to transport his saxophone twice a week.