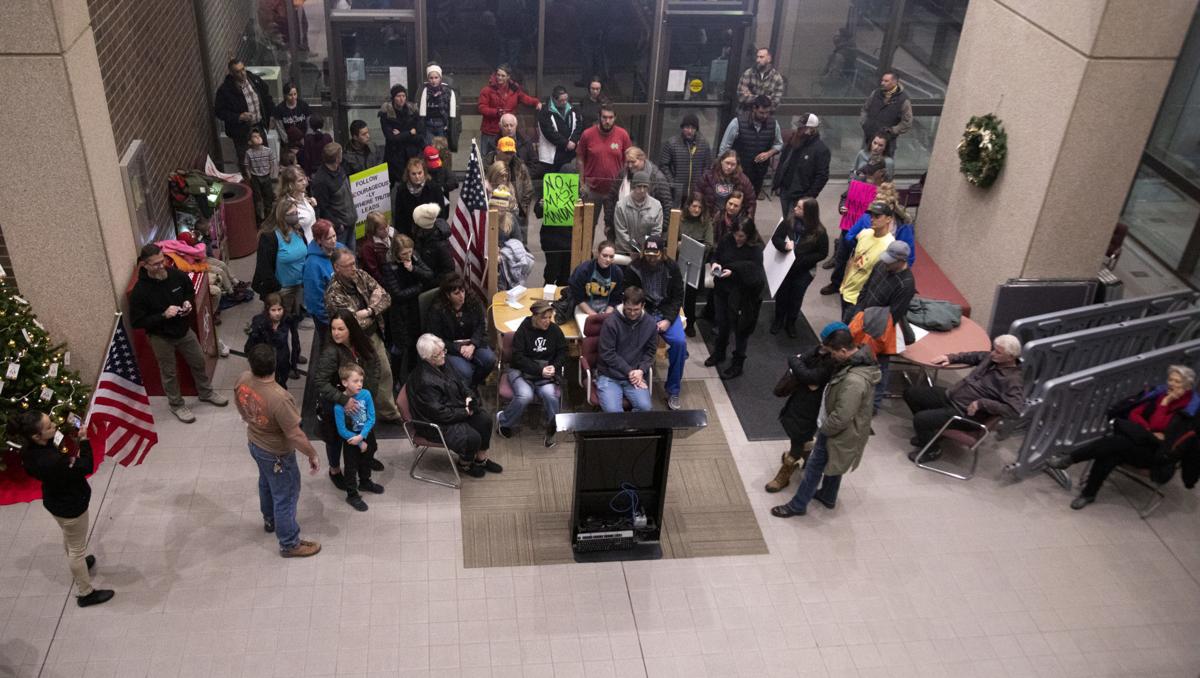 A group opposed to a mask mandate watches the Rapid City Council meeting on Monday at City Hall. 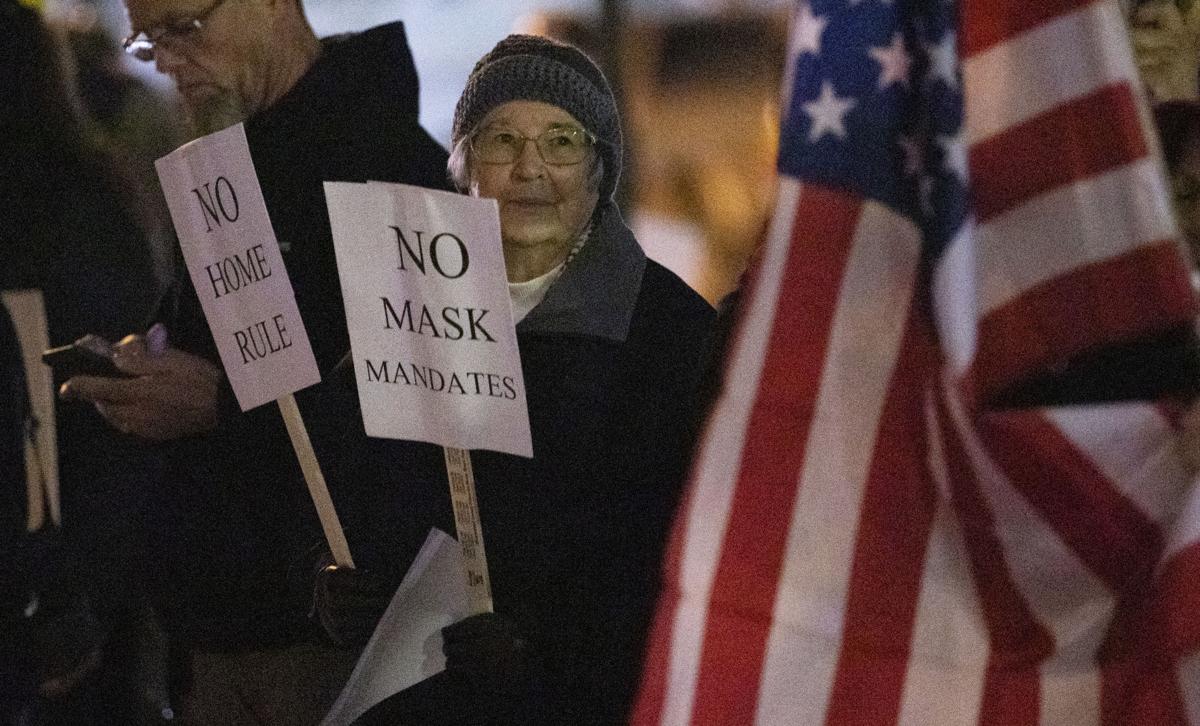 People gather outside of the Rapid City Hall to oppose a mask mandate on Monday before the City Council meeting. 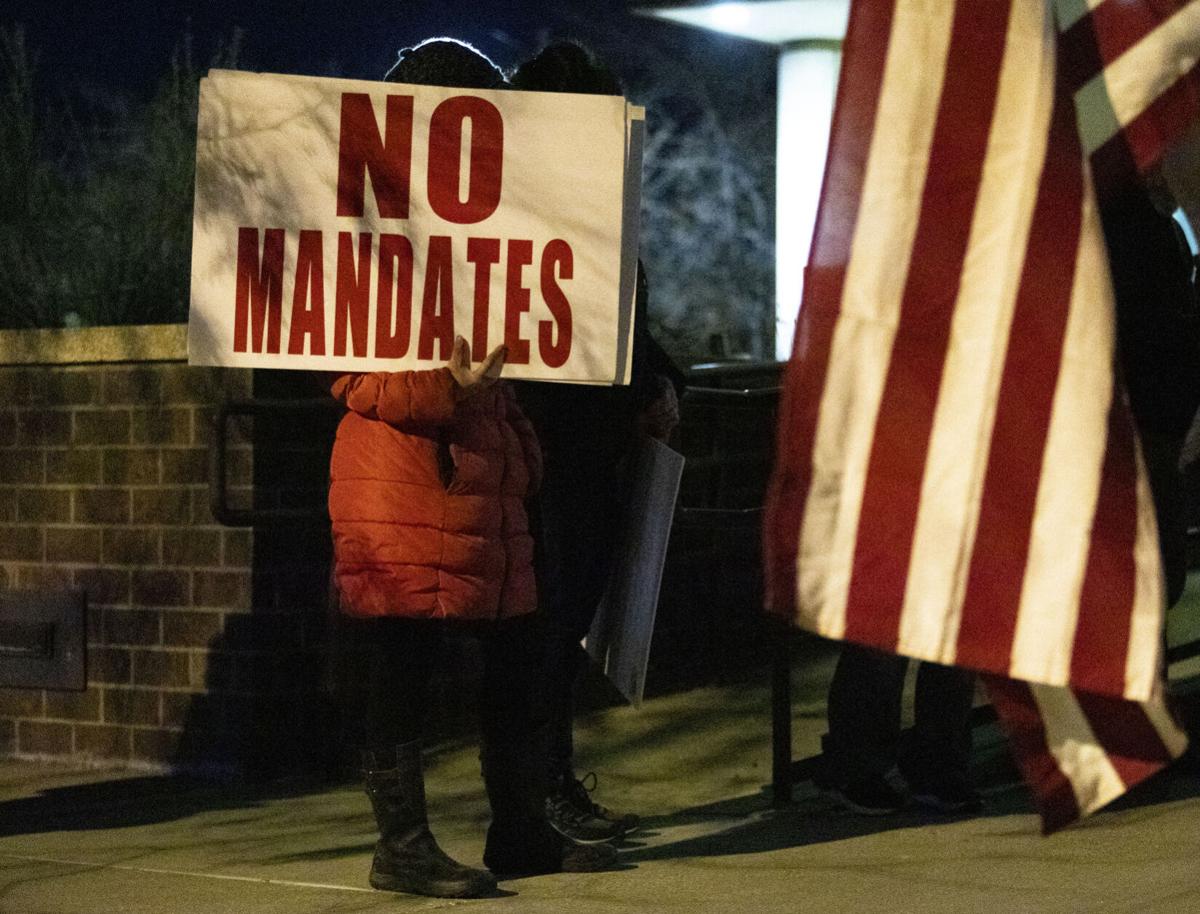 A woman holds a sign outside of the Rapid City Hall on Monday evening while people gather to oppose a mask mandate.

The majority of the public attending the meeting did not wear masks despite a mask requirement while in city buildings. There were also three police officers present as well as Rapid City Police Chief Don Hedrick, who all wore masks.

After about three hours of public comment, council members approved Ordinance No. 6454. It will be heard once more for the second reading. If approved, it will go into immediate effect and last until Feb. 28, 2021.

Ordinance No. 6454 replaced Ordinance No. 6453, the ordinance approved Nov. 19 with Mayor Steve Allender’s tie-breaking vote. Instead of requiring the public to wear a mask in public indoor places where six feet of social distancing was not possible, businesses and other facilities that have an occupancy of 50 people or more will be able to opt out of the regulations.

Council voted on the ordinance and removed “houses of worship” from the indoor public places definition and changed the signage information so businesses will be required to post signs that state masks are required or recommended. Businesses or facilities that opt out of the ordinance will have to have signage stating they chose to opt out.

City Attorney Joel Landeen said he’s never seen an ordinance that had an opt out option after a question from Roberts.

“I find it interesting we’re writing an ordinance that has zero teeth whatsoever to it that really doesn’t affect anybody except possibly has a constitutional violation for putting churches in it,” Roberts said.

Landeen also clarified that the penalty mentioned in the ordinance would be applied to a business. However, if the business made reasonable efforts to require masks, he said there wouldn’t be an issue.

Enforcement will be through “an administrative process” rather than criminal. The city would notify the business of the violation, provide the information on the ordinance and ask for compliance. If further violations are noted, the city will contact the business again either in writing or through the City Code Enforcement division. The total fine and cost of the violation will be $100. Each day the violation occurs could be considered a separate offense.

The ordinance does give businesses the ability to ask patrons to leave the premises. If the patron refuses to comply, they could be charged with trespassing.

Rapid City Municipal Code 9.12.140 states that it is unlawful for people to trespass and any person not complying with regulations could be subject to a fine no less than $25 and no more than $100 and/or 30 days in jail.

If an indoor public place requires masks, all customers, patrons, guests and employees who have face-to-face contact with the public would have to wear a face covering where six feet of social distancing can't be achieved or maintained.

Ordinance No. 6453 and a resolution concerning masks were unanimously tabled.

The council will meet for its working session at 12:30 p.m. Wednesday and have its next regularly scheduled meeting at 6:30 p.m. Dec. 7.

A group opposed to a mask mandate watches the Rapid City Council meeting on Monday at City Hall.

People gather outside of the Rapid City Hall to oppose a mask mandate on Monday before the City Council meeting.

A woman holds a sign outside of the Rapid City Hall on Monday evening while people gather to oppose a mask mandate.