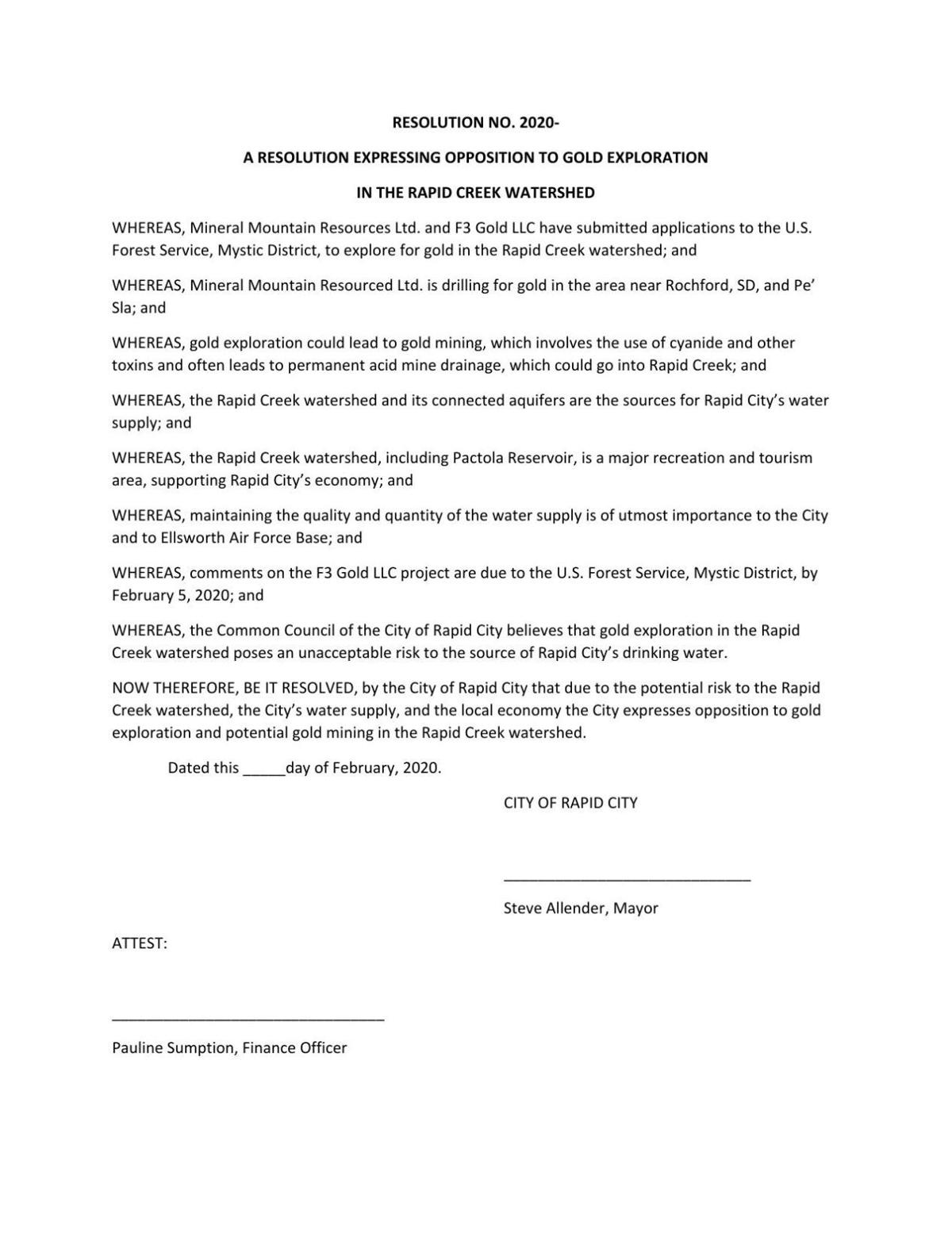 The resolution comes at a time when written public comment is open for a proposed exploratory gold drilling project within the Black Hills National Forest by Minnesota-based F3 Gold, LLC. Public comment during the environmental assessment process closes Wednesday.

Since the exploratory drilling project is in the Rapid Creek watershed and Pactola Reservoir area — Rapid City's main water source — concerned citizens approached the city seeking a resolution three weeks ago. The resolution was drafted by Rapid City resident Lilius Jarding, a member of the Black Hills Clean Water Alliance.

Prior to his vote, Roberts voiced dissatisfaction in the fact that the resolution was brought to the City Council just two days before the deadline. He said the council was acting based on emotion, not fact, and requested the resolution be tabled.

"I think that if we are going to do this, we should take our time, have both sides bring in the evidence. We should take a good look at it," Roberts said. "Now I know that the people on the other side of this that want this pushed right away — they want it pushed because you're on a time line. That's BS. Bring something forward right at the very end and try to make us feel awful because we are not 'protectors of the water,' 'we don't care if the water's contaminated.' I call BS on that."

Evans said as long as he is on city council, he will oppose any gold exploration or gold mining in the city's watershed.

"I'm going to tell you right now that the vision I have for Rapid City is not incorporating any kind of mining in our watershed of our town," Evans said. "I will continuously and forever be opposed to that sort of thing because I believe it is not looking towards the future and what is going to enrich us as a community. We have limited resources in what we can offer, and to destroy those — major among them being the aesthetics of the area — is not lining up with where I want the city to be going."

During the public comment portion of Monday's city council meeting, Mayor Steve Allender noted 31 people had signed up to speak on the issue of the resolution, both for the measure and against it.

Because of the amount of people signed up to speak, the city council suspended its rules and limited each side to only 10 minutes each.

Eight public speakers, including some faculty members and students from the South Dakota School of Mines and Technology, voiced opposition in the city council passing the resolution.

Five public speakers voiced support for the city council to pass the resolution on opposing the drilling.

Although the city of Rapid City's formal resolution will be one of several public comments submitted to the U.S. Forest Service, Armstrong encouraged all citizens to write letters and submit them to the Forest Service Office.

The Forest Service is accepting written public comment on the F3 Gold, LLC drilling proposal until 5 p.m. Feb. 5. Comments may be submitted by mail to 8221 S. Mount Rushmore Rd., Rapid City, SD 57702; by email (comments-rocky-mountain-black-hills-mystic@usda.gov) with “F3 Jenny Gulch Exploration Project” as the subject; or by fax at 605-343-7134. Comments submitted, including names and addresses of commenters, are public information.