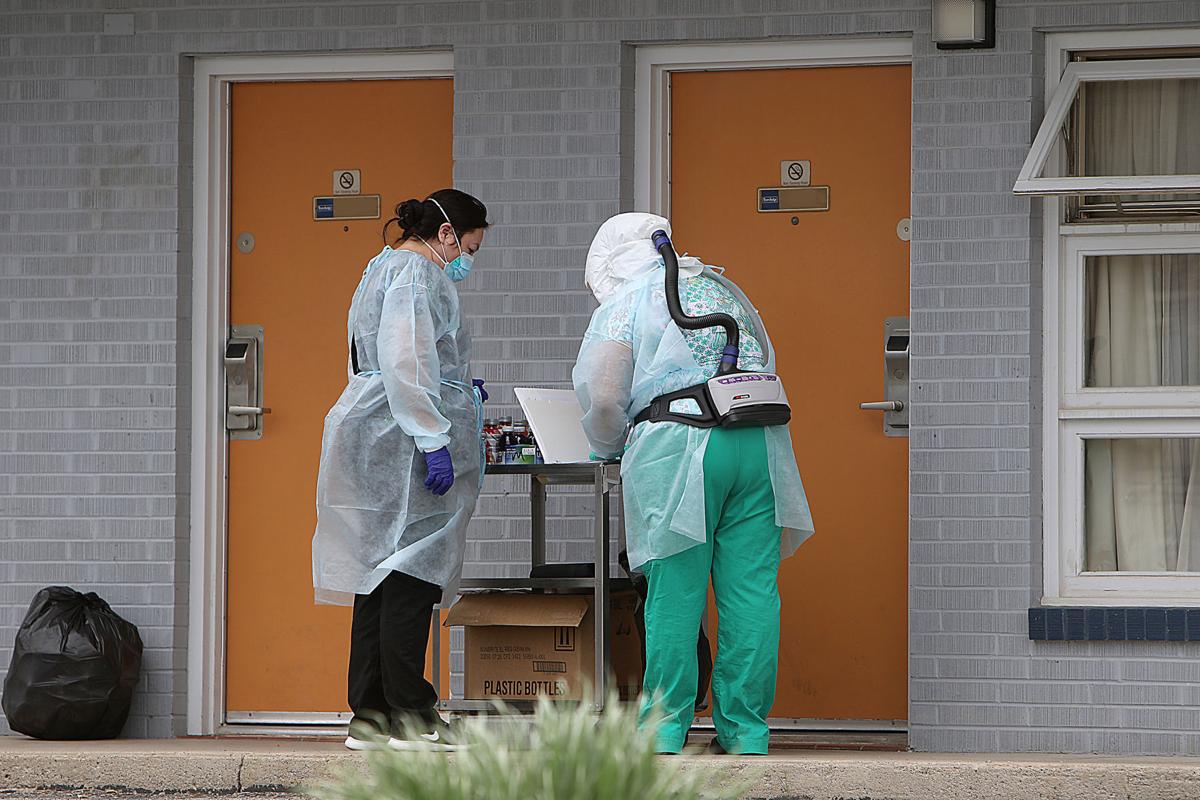 Caregivers from the Oyate Health Center get ready to check in on a patient quarantining Wednesday at the Travelodge hotel in Rapid City. 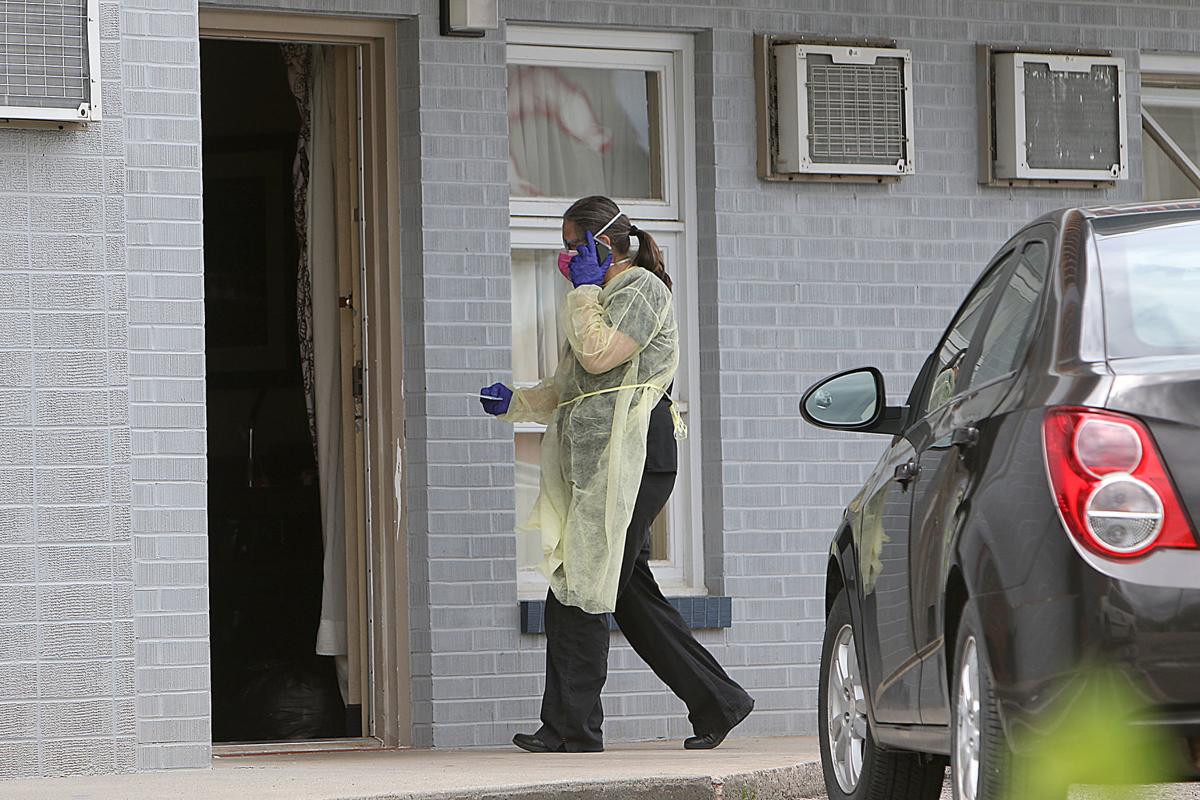 A worker stands near a room at the Travelodge in Rapid City where COVID-19 patients from Oyate Health Center are staying if they have no other safe place to quarantine. 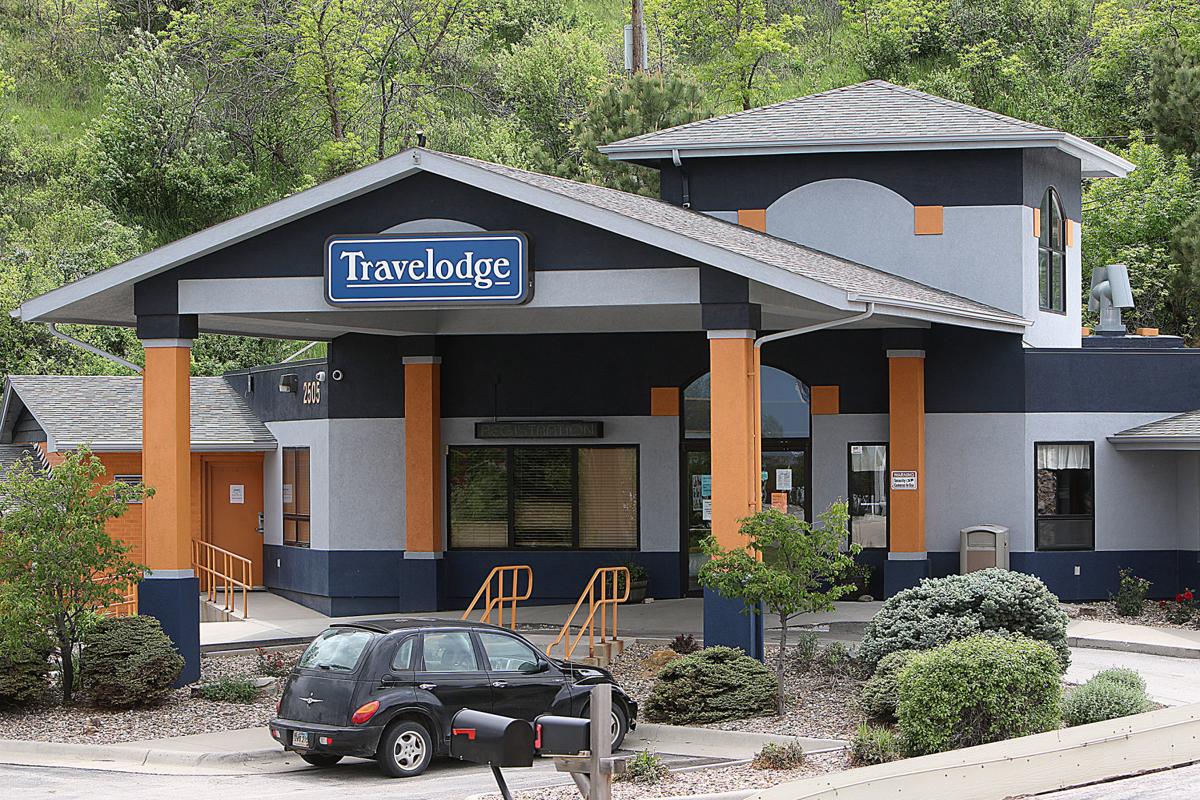 The Travelodge hotel in Rapid City is giving Oyate Health Center a medical discount for the 22 rooms its renting to house patients who have no other safe space to quarantine.

Healthcare facilities, nonprofits, private companies and governments are working together to feed and house COVID-19 patients who have no safe place to quarantine while recovering from the virus.

The groups aren’t just helping people experiencing homelessness, but also those who have a home but not their own room to safely quarantine in.

“We’re all partners in this” and “without each other we couldn’t be succeeding to the extent that we are,” said Dr. Mark Harlow, chief medical officer for the Oyate Health Center and board president of the Cornerstone Rescue Mission.

“The community has been extremely generous” in helping both organizations, Harlow added.

Oyate Health Center, which serves the Native American community in Pennington County, has seen 61 COVID-19 cases, spokesman Brandon Ecoffey said Wednesday afternoon. And it has rented 22 rooms — which are currently all booked — at the Travelodge hotel to help two main groups of patients, Harlow said.

The first group are people from congregate living areas such as homeless shelters or halfway homes. Harlow said it’s safer for them and others to isolate in the hotel rooms than to live in the group facilities. The second group are people who live in multi-generational homes where they may not have their own bedroom or would be risking infecting an elderly or immunocompromised relative.

A spokesman for Monument Health did not immediately respond to a message asking if the hospital pays for hotel rooms for these groups of people like Oyate Health Center does.

Patients at the hotel — which has given Oyate Health Center a discounted medical rate — are visited by nurses twice a day and can call for help at any time, Harlow said. The Mission donates sack lunches while Oyate Health Center buys hot dinners from Colonial House.

As of Wednesday afternoon, six patients have become sick enough that they needed to be transferred from the hotel to Monument Health, Harlow said. And because all of the hotel rooms are full, Oyate Health Center has had to refer some patients to Rapid City’s emergency shelter.

The temporary 100-bed shelter at the Rushmore Plaza Civic Center opened May 5. It’s a collaboration between Rapid City, Pennington County and multiple medical and nonprofit organizations. It's managed by Norma Rendon, director of Where All Women Are Honored, a nonprofit that uses Lakota values during its domestic and sexual violence prevention work and at its shelter for survivors.

The emergency shelter isn’t just for sick people without homes but for anyone who has “no other place to go” quarantine, said Darrell Shoemaker, spokesman for the Rapid City government.

Shoemaker said the shelter will accept anyone who has a referral from a medical or social services provider who has determined the shelter is the best place to keep the person and others safe. There were eight guests as of mid-day on Wednesday, Shoemaker said.

The emergency shelter is also used to quarantine people with COVID-19 who are staying at homeless shelters, Shoemaker said

The men’s shelter in downtown Rapid City has not seen any COVID-19 cases but there have been five at the women’s facility, Lysa Allison, executive director of the Cornerstone Rescue Mission, said Wednesday morning.

The first woman from the Women and Children’s Home — which houses homeless women and children as well as parolees — went to get tested May 18 after developing symptoms, Allison previously told the Journal. Allison said she believes the woman and her children found family to live with.

Allison said she asked the Department of Health to arrange for mass testing the day she learned of the first positive case.

Harlow said the Department of Health sent over testing equipment and Oyate Health Center tested all 26 adult residents — tribal and non-tribal members — over the weekend.

Two asymptotic women ended up testing positive and are quarantining at the emergency shelter, Allison said.

"I believe they were surprised by that, they didn't feel any symptoms,” she said.

The Women and Children’s Home has been cleaning the shelter and stopped receiving new residents in April order to allow for more social distancing, Allison said. Staff are required to wear masks at all times and residents must wear them when they're in common areas.

Allison said some women must leave the shelter to go their essential jobs or medical appointments, but most don’t need to go to the grocery store since the shelter provides meals for them.

We’re “not a prison, not a lock-down center,” so residents are allowed to leave but are encouraged to only do so for essential reasons, Allison said. Staff also encourage residents to go on walks to get fresh air and exercise.

The 68-bed facility now has about 16 residents due to the lack of new intakes and residents who are quarantining, Allison said. But new guests will now be accepted on a “case-by-case” basis now that testing has shown that no one else is positive for the virus.

Mass testing lets us keep infected and non-infected guests safe, and “tells us is it’s safe to bring new people into the” shelter, Harlow said

He said a homeless family — a woman and her two children — at the hotel will be transferred to the Women and Children’s Home once they no longer have the virus.

The debate about COVID-19 vaccine passports

“My family’s experience with this sickness right now … it’s a nightmare,” Carrie MiddleTent said. “We knew this was going to happen though.”

Caregivers from the Oyate Health Center get ready to check in on a patient quarantining Wednesday at the Travelodge hotel in Rapid City.

A worker stands near a room at the Travelodge in Rapid City where COVID-19 patients from Oyate Health Center are staying if they have no other safe place to quarantine.

The Travelodge hotel in Rapid City is giving Oyate Health Center a medical discount for the 22 rooms its renting to house patients who have no other safe space to quarantine.