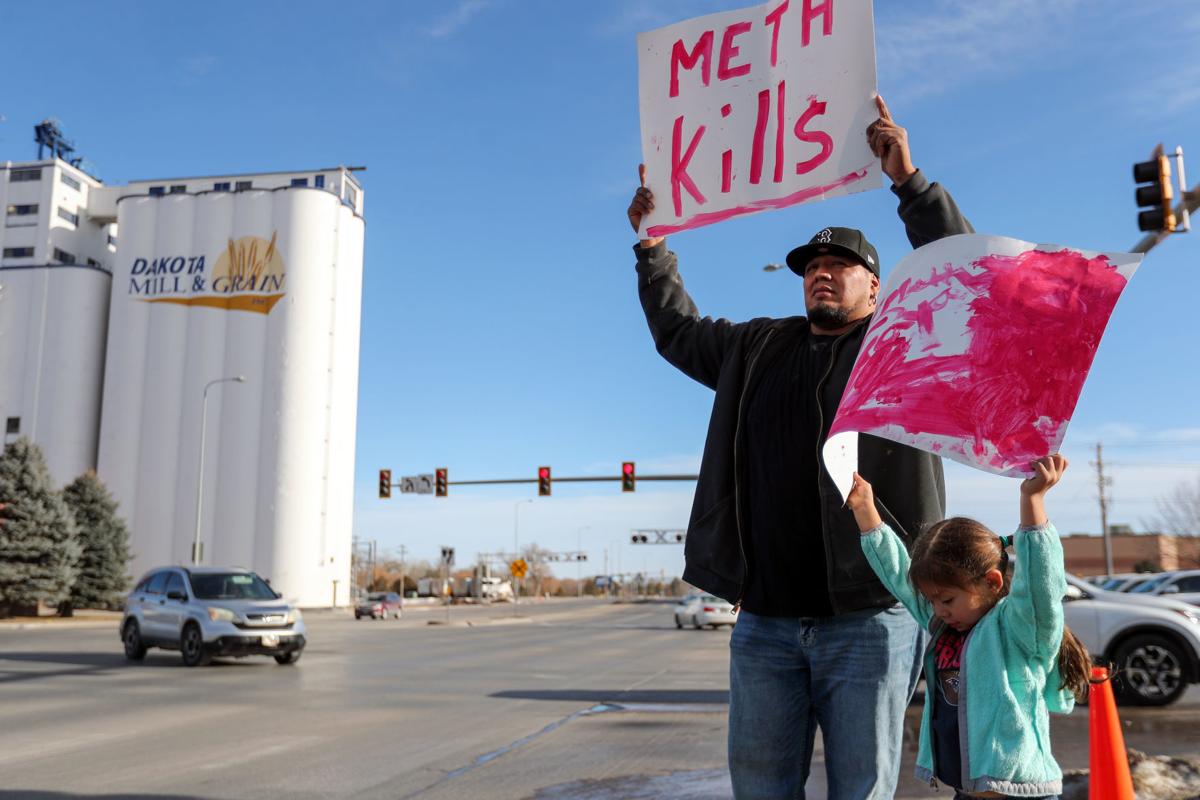 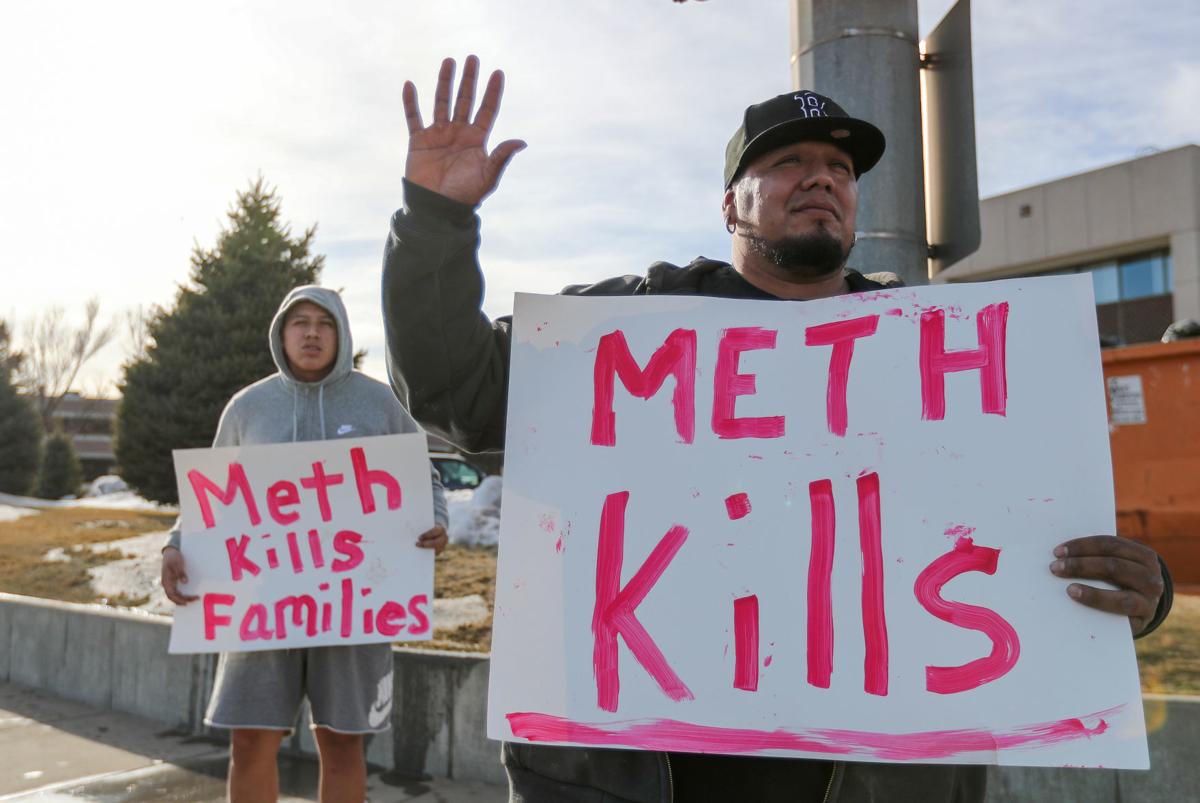 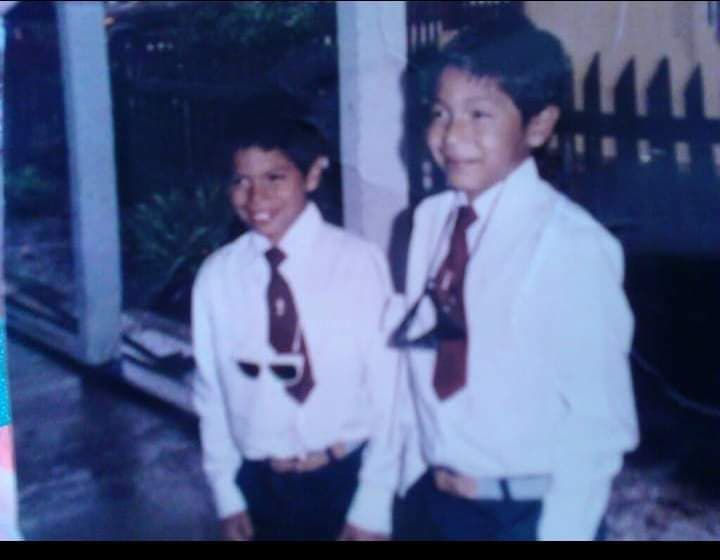 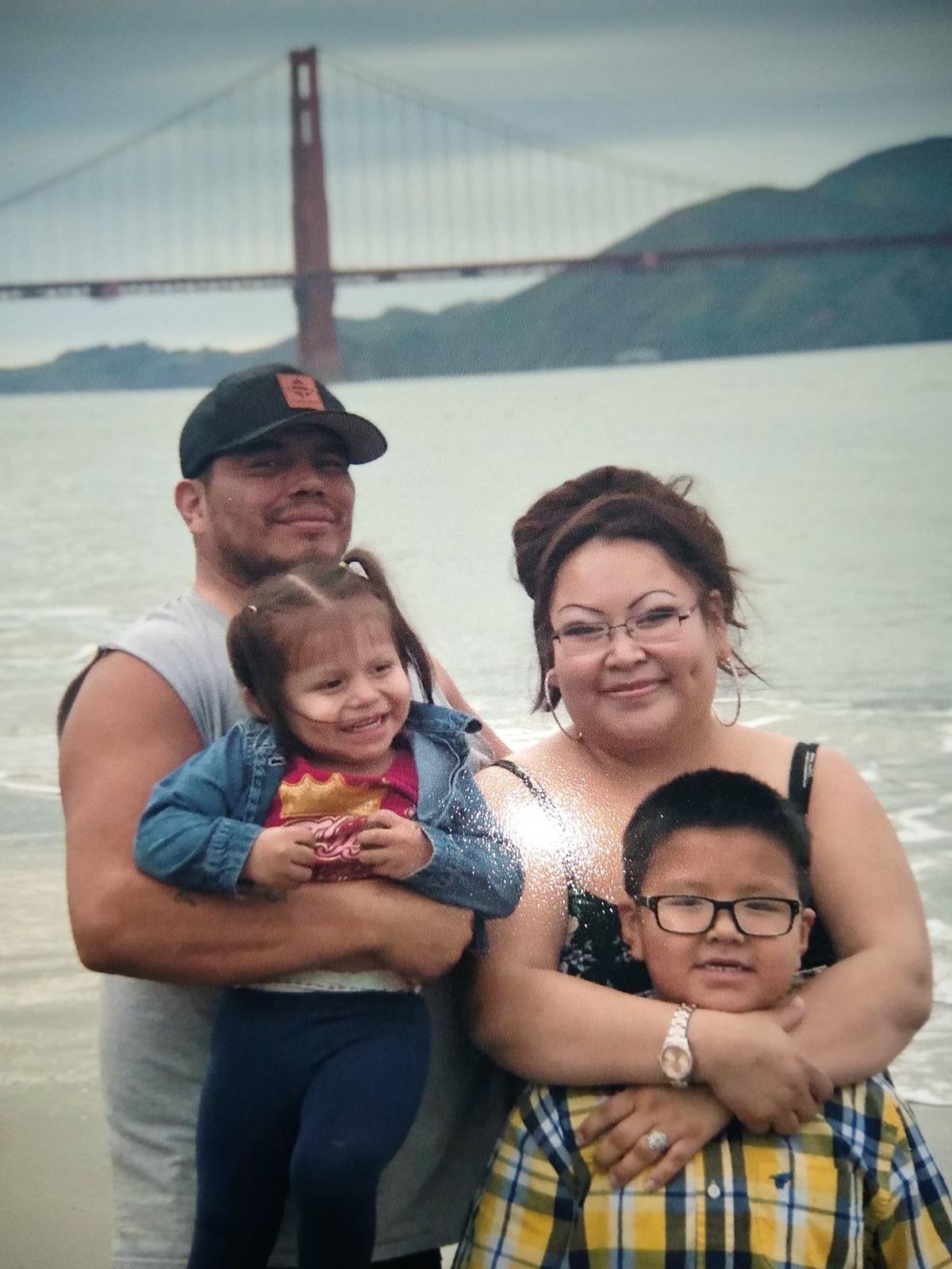 "My initial response was devastation," the 40-year-old Rapid City resident said. "That's my twin brother. I know him. I know him personally to where, this isn't him."

Julian was arrested Nov. 30 and bonded out the next day.

He was dead less than three weeks later.

"He had a massive heart attack," on Dec. 18, Joe said. "The doctors said that they've never seen a man so young die with that kind of heart attack. They believe that it was methamphetamines" that caused it.

Now Joe — a former drug user himself who spent time in federal prisons — and his family are on a mission to educate others about the dangers of meth, how to avoid the drug, the devastating impact it has on families, and the importance of supporting loved ones who are addicted.

Joe, his wife Tiffany Phelps, and their children spread their message by holding signs reading "meth kills" and "meth kills families" while standing at the corner of Fifth and Omaha streets during the Lakota Nation Invitational and on Christmas Eve.

"So much support and love has come from just that little act," Joe said.

He said drivers honked in support, someone brought his family coffee, while others stopped to ask about their story or share how meth has impacted their lives. One man said he is going through drug court for meth use while another said his niece is struggling with the drug. The mother of East Lee broke down in tears as she shared the story of her 19-year-old son being shot in the head after he stopped using meth.

No one has been arrested for the 2015 murder near Eagle Butte, but some community members believe it was linked to meth dealers, according to KELO-TV.

"Our signs say (meth) kills families because it does," Tiffany said. "It hurts the family when something happens. We're the ones left with the aftermath of it."

"Julian was an amazing man, he was very loving," Joe said. "I could rely on him for anything."

Julian's death leaves behind devastated loved ones, including his fiance and five children, Joe said. And the world lost someone who enjoyed being with his family, working at the concrete business Joe owns, and going hunting, fishing, hiking and camping. It lost someone who volunteered at the Cornerstone Mission and was receiving help to quit meth.

"Everybody thinks that Native Americans, especially here in Rapid City, are just druggies and alcoholics and they don't care and they're just tearing down the community," Joe said. "We're not ... we want to build our community up and strong."

The draw of meth

The Garcia twins grew up in Boise before moving to Pine Ridge when they were 15 with their parents and two older sisters, who lived on their own.

They attended Pine Ridge High School where they enjoyed boxing, wrestling, and playing basketball and football.

Joe said he started to drink alcohol, smoke marijuana and use cocaine when he was 18.

"It was because I wanted to look cool. Everybody else around me was doing it. It was peer pressure. I thought if I didn't use, they wouldn't want to hang out with me," Joe said. He said he was "week minded" and went along with crowd rather than focusing on himself or finding positive activities to do.

In 2006 when he was in his mid-20s, Joe was arrested as part of a major investigation of a cocaine dealing operation led by Geraldine Blue Bird. Joe and the factual basis document he signed say he knowingly let a dealer use his car to transport cocaine from Denver to Pine Ridge. He said he pleaded guilty to conspiracy to distribute cocaine and spent more than seven years in federal prisons across the country.

Meanwhile, Julian began using meth in his 30s, Joe said. He was exposed to the drug through friends and families and used it at parties. "And then it slowly turned into, he started it everyday," Joe said.

Once he was released from prison, Joe began doing suicide prevention outreach and eventually started a concrete company. He said he relapsed with alcohol several times but has not drank for the past two years.

Joe says he stays sober by focusing on his faith, exercising with friends at the gym, being part of a men's support group on Facebook, and listening to motivational podcasts as he drives to job sites with his co-workers, which used to include Julian.

"I've shared this story with Julian of being able to fight those demons by doing something positive with yourself," he said.

Julian stayed sober for a year thanks to an outpatient treatment program he had to attend after being convicted of meth ingestion in 2017, Joe said. But Julian eventually went back to using the drug to cope with a cancer diagnosis, the fear of looking weak in front of his children, and guilt over needing to lean on his twin for support and housing. And he kept hanging out with others who use meth.

"He found comfort in that drug because he was struggling," Joe said. "He didn't want to feel like a burden."

But Joe said his brother was "truly fighting" to quit by attending Narcotic Anonymous classes and working with a counselor at the Native Healing Program at Sioux San.

Julian remembered having one beer but not doing drugs on Nov. 29, the day he broke into the house, Joe said. Julian thought his drink was drugged given the fact he didn't remember what happened after drinking the beer and had a "psychotic break," Joe added.

Joe said law enforcement told him that Julian drove to a behavioral health center in Hot Springs that day, where security workers watching surveillance cameras saw Julian wandering around and called 911. He said law enforcement told him that a deputy picked him up and put him on a mental health hold but took him to the emergency room at the Rapid City hospital — which let him go — instead of the mental health hospital.

Lorraine Fuss, 21, told the Journal that she woke up before 8 a.m. on Nov. 30 to the sound of someone knocking at her door. She found a police officer outside who told her she needed to evacuate because her house was on fire.

There were "flames coming out of all directions" from the garage attached to her house, she said.

The officer asked Fuss if she lived with anyone else, and she said no and then the officer told her that a man named Julian Garcia had been in the garage attic — which connects to the attic in her house — since 5 p.m. the day before.

"I had no idea anybody was there," she said. "I was in complete shock, disbelief" and terrified, said Fuss, who wasn't home when Julian entered through the home's back door.

Julian told officers that he ran into the attic to hide from drug dealers who were chasing him, but couldn't say who they were, police spokesman Brendyn Medina told the Journal at the time. And Julian said he lit his sweatshirt on fire in order to signal for help.

Joe said he hoped Julian being prosecuted for the incident would "give him a new avenue of change."

But he died before the case was resolved.

Fuss said Joe called her to let her know about his brother and his death.

"I know that he wasn't trying to target me, harm me ... he didn't have bad intentions," Fuss said. "This was something outside of his control."

She said Joe has offered to fix her garage — which needs new sheet rock, roofing and electric wiring — for free, an outcome she called "enough for me."

"That's the one thing Julian wanted," Joe said while holding back tears. "That's one thing he told me, he wanted to make it right."

Joe said God told him to make the signs and stand on the street corner to help fight against stigmas and stereotypes surrounding meth use, and because "somebody may want to hear that or see that."

Joe and Tiffany said having a close support network can help prevent people from starting or stopping drugs.

David Garcia, one of Joe's eight children and a senior at Pine Ridge High School, agreed. He said the classmates he sees using drugs are depressed and feel they have no one in their corner. David said he's able to lean on his parents and Tiffany, his step-mother.

"I never thought of doing that" and stop hanging out with friends if they start to offer me drugs, David said.

We need "more men to be vulnerable. More men to be compassionate for one another instead of hiding behind that exterior" of appearing tough, Joe said. "What makes you strong is the vulnerability that you show other people, the love and the care."

And families and society shouldn't be afraid to confront meth users with "love and compassion for people that are actually trying" to quit, Joe said.

Joe said he approached one of his employees about using meth and the worker dumped out a pipe in front of him and agreed to quit. And he wonders if Julian would have died at a younger age or on the street instead of at the hospital if he had given up on him.

Tiffany said she wants to see more meth treatment facilities while Joe said he wants drug users to have longer probation sentences to make sure they don't relapse like his brother did. He said while prison helped him, it can make some people worse.

"This isn't going to stop for us and I hope and pray that more people stand out with signs and express their own battles because we all have one," Joe said. "We all have a story."