Read through the obituaries published today on rapidcityjournal.com. 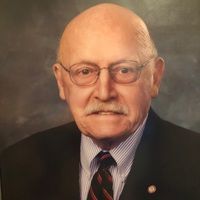 PIERRE | Thomas Conrad Adam died on Saturday, Oct. 5, 2019, in Sioux Falls at the age of 84. He was born on Feb. 16, 1935, in Deadwood to August Conrad Adam and Jesse Ellen Maxwell Adam. Due to medical complications, Tom lost his mother only two weeks after his birth, and was raised solely by his father until August was remarried to Bessie McGraw. Later, Tom's brother William was born and completed the family.

Tom was a miner's son and lived with his family in a variety of Montana mining camps during World War II, but was mostly raised in Lead, home to Homestake Gold Mine where August worked. Even as a boy Tom was resourceful and hardworking, always looking for ways to contribute. He often told stories about his childhood paper route, delivering the Lead Daily Call up and down the many tall streets of Lead, through very deep Black Hills snow, or of his time working in the mine as a young man. He also worked hard in school and excelled academically, earning the respect of his teachers and peers who voted him class president in 1952, his senior year. Tom played baseball and football for the Lead High Golddiggers, and was his team's captain.

Following high school, Tom attended the University of South Dakota. After his freshman year, he proudly served in the United States Army for two years then returned to USD, where he was an active contributor on campus and a member of Lambda Chi Alpha fraternity. While an undergrad, Tom met his future bride, Patricia Mickelson, and they were married in 1959 in Sioux Falls. As newlyweds, they returned to USD, where Tom attended law school and earned his Juris Doctorate in 1961.

Upon graduation the couple moved to Pierre, where they made their home for 55 years, and where Tom began his lifelong career practicing law with the firm of Martens & Goldsmith, presently known as May Adam Law Firm. During his tenure at the firm, Tom was very politically attuned, and spent significant time at the State Capitol during the legislative session. He also proudly represented the South Dakota Bankers Association for almost 40 years but mostly, Tom developed a meaningful practice which cast far and wide, helping farmers and ranchers meet their needs.

Among his many other contributions and commitments, Tom served on the national board of the Easter Seals Society, served as Chairman of the South Dakota Board of Bar Examiners, and was a Director of the Sanford Underground Research Facility located in the former Homestake Gold Mine. Tom and Pat were also disciples at the First United Methodist Church, where they were actively involved in the life of the church for decades. In his free time, Tom loved hunting, reading, tending his salsa garden, pruning his apple trees, joining his wife for a float down the Missouri River, or spending time together at their beloved cabin in Spearfish Canyon.

In addition to making the lives of their four children the best that it could be, Tom and Pat were proud grandparents of 14 and great-grandparents of 3, and loved spending time with all of them.

Tom's 14 grandchildren are his pallbearers, with honorary pallbearers including Karl Fischer, Milton Schwartz and the past and present attorneys of the May Adam Law Firm.

Visitation, with family present will be from 5:30-7 p.m. CDT on Thursday, Oct. 10, at the First United Methodist Church of Pierre, 117 North Central Ave.

The family suggests memorials may be directed to the First United Methodist Church of Pierre, the South Dakota State Historical Society, or The Trail of Governors Foundation.

Online condolences can be made at isburgfuneralchapel.com.

Services will be at 2 p.m. today at Foothills Baptist Church in Piedmont.

He served in the U.S. Air Force.

Services will be at 11 a.m. on Oct. 11, at Kirk Funeral Home. Burial will be at Black Hills National Cemetery near Sturgis.

A Celebration of Life will be at 10 a.m. on Oct. 12, at St. James Episcopal Church in Belle Fourche.

Services will be at 2 p.m. on Oct. 12, at Behrens-Wilson Funeral Home, with visitation beginning at noon.

Services will be at 1 p.m. on Oct. 11, at Fidler-Isburg Funeral Home, with visitation one hour prior. Burial will be at Rose Hill Cemetery.

Gregory A. Mumm — 10 a.m. at Stavkirke Chapel in the Hills in Rapid City

Super Sunday -- Test yourself with our Big Game Trivia Quiz!