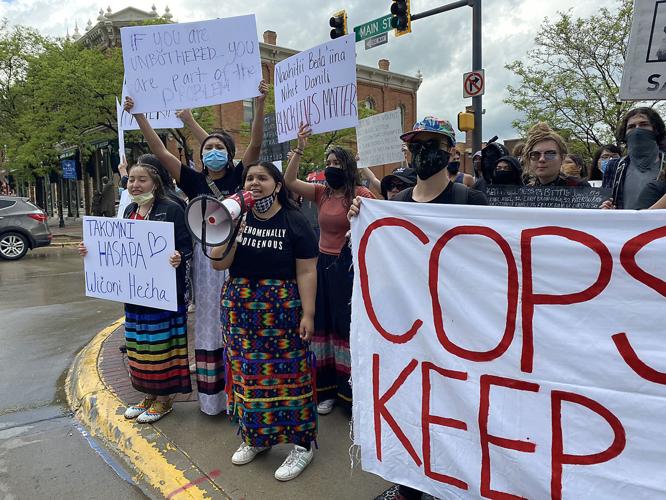 Tokata Iron Eyes leads a group of protesters chanting at 6th and Main streets in Rapid City on Wednesday afternoon. 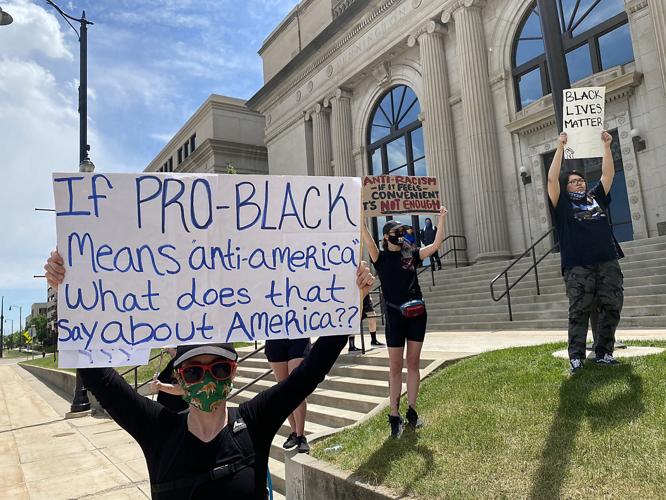 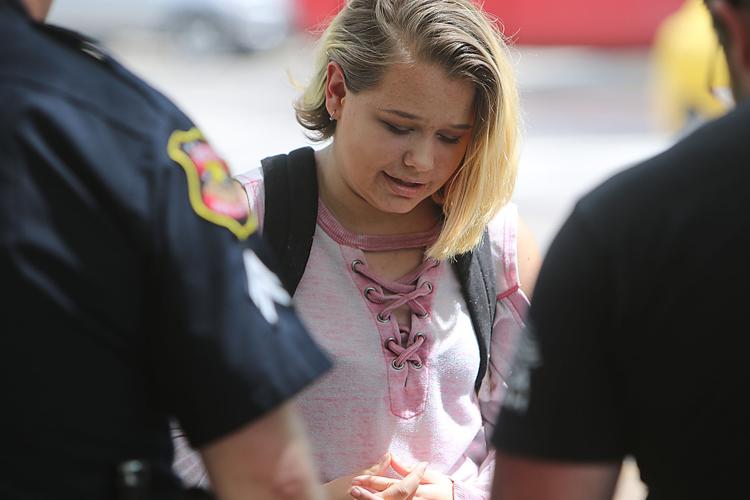 Kaylee Fiester prays with members of the Rapid City Police Department on Wednesday. Fiester was downtown during the Black Lives Matter protests that continued Wednesday in Rapid City. 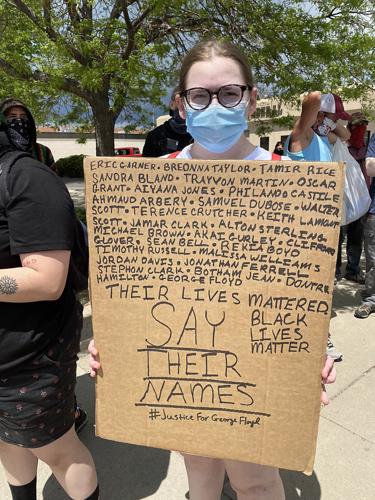 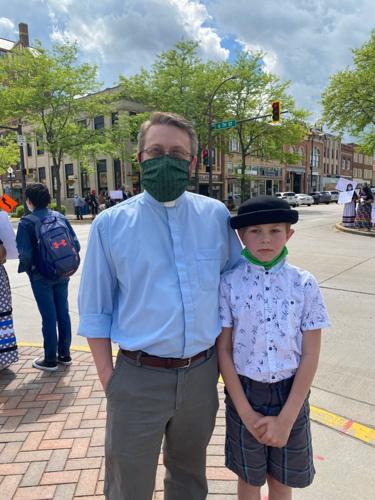 A paster and his son at Wednesday's protest in downtown Rapid City.

Two groups of Black Lives Matter protesters cheered and waved at each other as they met Wednesday afternoon in downtown Rapid City.

“Hi, how are you?” Lakota youth activist Tokata Iron Eyes exclaimed into a megaphone to protesters. The protesters had just walked from the courthouse to meet the group from the Pine Ridge Reservation at Main Street Square.

More than 50 protesters carried signs against police violence and in memory of George Floyd, Breonna Taylor and other black people killed by police. Some signs also focused on solidarity between Indigenous and Black people.

"I wanted to show up today because police brutality is something that can be qualified as an epidemic in this country and it's especially affecting black and Indigenous people of color, said Iron Eyes, a 16-year-old from Pine Ridge. We want to “walk the streets in peace without being profiled by law enforcement and then putting (ourselves) in danger just by existing.”

“We need to hold (police) accountable, because if they’re not doing so – which is their only job, to literally be responsible for accountability – it's up to us,” Iron Eyes said.

The protesters were mainly teenagers and young adults, but included a pastor from Custer, his son and two other families with young children.

"I came here because of the racist police activity and the killing of George Floyd and other African-Americans,” said Omaka Mendoza, an 11-year-old from Rapid City who attended the protest with his family.

“There have been racist activity against other people of color, but I think it's bigger against black people,” said Mendoza, who is Lakota. "I think we need to have their back, and we all need to be in it together.”

The Journal saw counter protesters staging at the Trump Store earlier on Wednesday but they hadn’t shown up as of 2:45 p.m. Counter protesters with Trump, American, Thin Blue Line and Confederacy flags attended and drove by demonstrations on Monday and Tuesday evenings.

There were more than 20 police officers, sheriff deputies and state troopers observing the protest. One plain-clothes officer filmed the entire protest on his phone.

Law enforcement told a few people — including an independent journalist — to stay on the sidewalk after they stepped into the street. They did not intervene when a group of protesters yelled expletives about the president as they used lighters to burn a small Trump flag.

The Rapid City protesters gathered at Main Street Square around 12:15 p.m. before marching and chanting at the stairs of the Pennington County Courthouse. There, they chanted “hands up, don’t shoot,” “Whose lives matter, Black lives matter,” and “No Trump, no KKK, no racist USA,” even during a short but heavy downpour of rain.

The group discussed their goal of being peaceful and avoiding any arrests like the ones that occurred Tuesday night. They cheered each time drivers in passenger and commercial vehicles honked in support of them. They also celebrated when a protester read the news that the former officer accused of murdering Floyd had his charge upgraded while three other former officers were charged as accessories.

The group eventually headed back to Main Street Square where they found the group from the Pine Ridge Reservation set up on the corner of 6th and Main streets with a megaphone, sign-making materials, snacks, drinks, masks and hand sanitizer.

There both groups continued to chant and hold signs that said Black Lives Matter in English, Lakota and Diné (Navajo). One sign pictured both the American Indian Movement and Black Power symbols. Another said “8 min, 46 sec” — a reference to the amount of time Derek Chauvin pressed his knee against Floyd's neck — and “8 bullets” — a reference to the number of times Louisville police shot Breonna Taylor to death while executing a no-knock warrant at the wrong house.

Others signs read “Black lives over profits, property, police,” “protect kids, not guns” and “if pro-Black means anti-cop, what does that say about cops?” One person wrote anti-police messages on an upside-down Thin Blue Line Flag.

A group of about 50 Black Lives Matter protesters met up with another group downtown Wednesday afternoon. Intermittent thunderstorms affected …

Tokata Iron Eyes leads a group of protesters chanting at 6th and Main streets in Rapid City on Wednesday afternoon.

Kaylee Fiester prays with members of the Rapid City Police Department on Wednesday. Fiester was downtown during the Black Lives Matter protests that continued Wednesday in Rapid City.

A paster and his son at Wednesday's protest in downtown Rapid City.