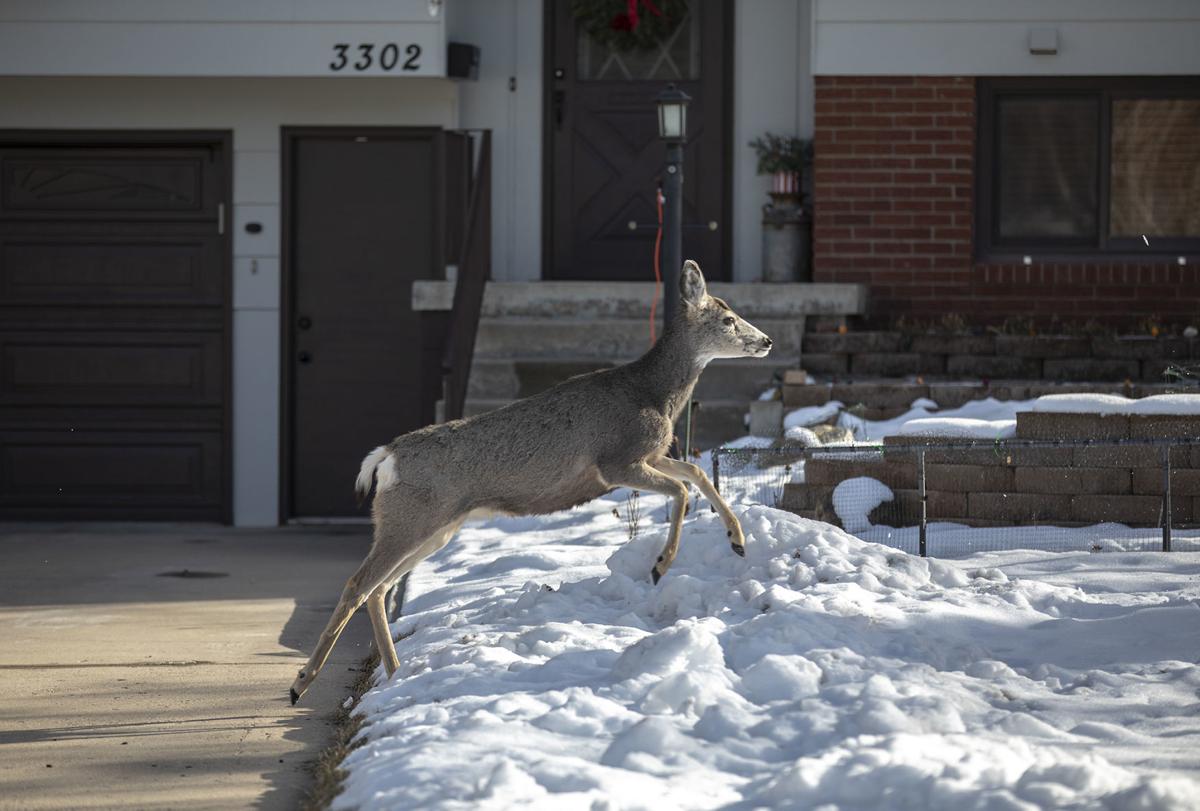 A deer jumps over a snowbank in a yard in southwest Rapid City. The city is proposing shooting 250 deer inside Rapid City after the holidays. 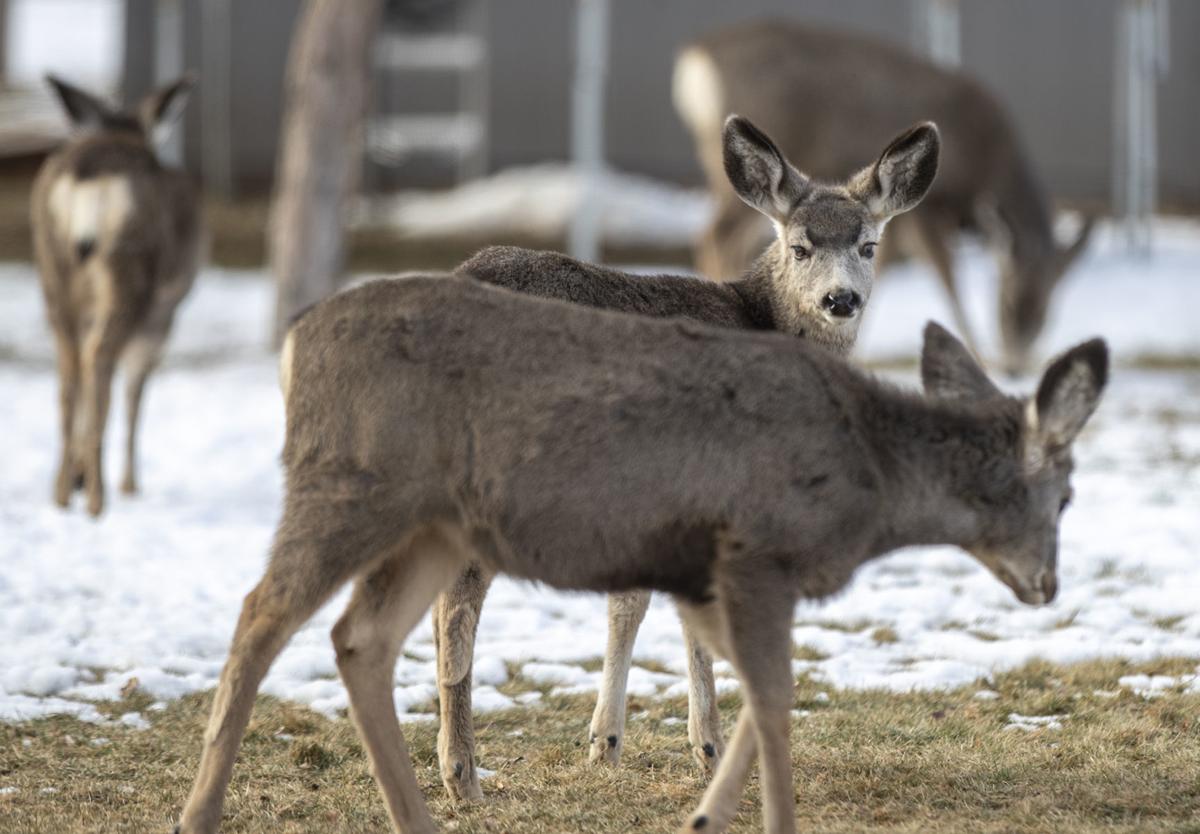 Deer walk through a yard Tuesday in southwest Rapid City. The city is proposing shooting 250 deer inside Rapid City, an increase of 100 over last year. 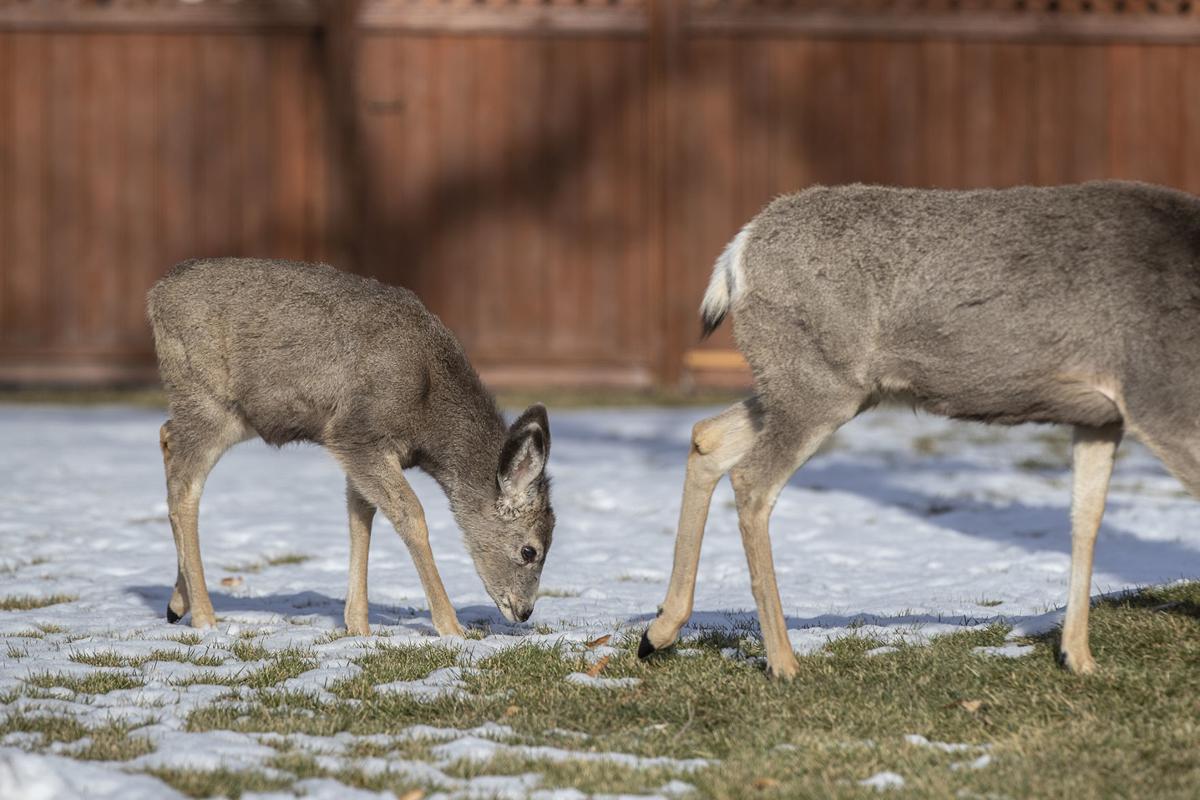 Deer walk through a yard Tuesday in southwest Rapid City. The City is proposing shooting 250 deer inside Rapid City, an increase of 100 over last year.

Rapid City’s annual harvest has arrived — of deer, that is.

At the city’s Public Works Committee meeting on Tuesday, the board unanimously recommended authorizing the Parks and Recreation Department to begin hunting up to 250 deer — an increase of 100 from last year — in Rapid City limits.

If approved by the city council, certified shooters hired by the city of will take aim at mule doe, whitetail buck and whitetail doe starting around Jan. 7. Operating at night, the shooters will stick to wooded areas on city property, greenways and private property where they’ve been granted access.

Skyline Drive and western Rapid City, near the precipice of the Black Hills, will be two hot spots of activity. Baiting stations packed with alfalfa and apples will be used to attract the deer. The goal is to “harvest” 250 deer. Last year, it was 150.

City Parks and Recreation Director Jeff Biegler said the increase in the number of deer targeted from past years is based on the results of the city’s annual deer trend survey, along with the recommendation from the state's Game, Fish & Parks department.

“We had a really wet summer so maybe there was a lot more greenery in town, but I really don’t know what you could attribute the increase to," he said. "For some reason it spiked this year. It could just be cyclical.”

Prior to the harvest, spotters man observation points in “urban wildlife interface” areas where deer typically congregate and the lines between city and forest are blurred. Sightings are tallied and noted.

This year, almost 500 deer were spotted over two overnight shifts and one early morning shift. Last year, about 400 were sighted. The data from the survey is augmented by deer-vehicle crash data and reports of deer sightings by citizens throughout the city, which are then considered by Game, Fish & Parks in its final analysis and recommendation. Preventing deer-vehicle accidents and protecting property are the two primary reasons for the harvest, Biegler said.

There hasn’t been a harvest this high since 2010, which marked the end of a six-year span where the harvest hovered at 300 deer. The past five years, it has oscillated between 100 and 150 deer. Deer have been harvested since at least 1996, according to city documents, but in 2002 and 2003, none were harvested.

The meat from the carcasses, after being tested for Chronic Wasting Disease, is processed and donated to Feeding South Dakota. Sportsmen Against Hunger and Black Hills Sportsmen will again assist with the processing costs, contributing around $9,000 this year to help offset the cost of the harvest, which will cost the city about $30,000.

City spokesman Darrell Shoemaker said it generally costs about $200 per deer for the harvest, which includes processing, ammunition, staffing and testing for disease. Between 40 and 50 percent of the cost is for processing.

Shoemaker encouraged residents who have seen a high concentration of deer on or near their property to reach out to the Parks Department. He also advised people to stay out of city parks between 10 p.m. and 5 a.m. when the shooters will be on duty.

In other action, the committee recommended:

At the Rapid City Council meeting Monday night, the council approved raising fees for ambulances, cemeteries, parking permits and a host of pl…

A deer jumps over a snowbank in a yard in southwest Rapid City. The city is proposing shooting 250 deer inside Rapid City after the holidays.

Deer walk through a yard Tuesday in southwest Rapid City. The city is proposing shooting 250 deer inside Rapid City, an increase of 100 over last year.

Deer walk through a yard Tuesday in southwest Rapid City. The City is proposing shooting 250 deer inside Rapid City, an increase of 100 over last year.