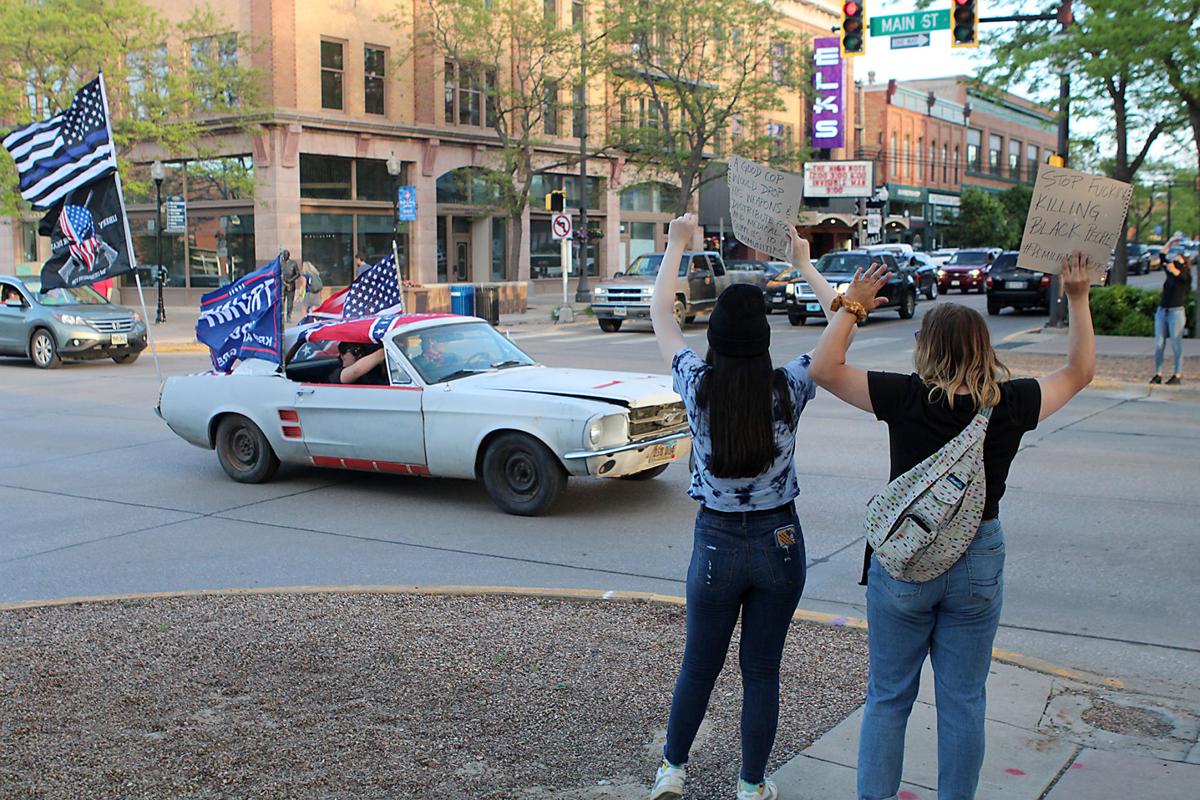 Counter-protesters drive past Black Lives Matter protesters at the intersection of Saint Joseph and Sixth streets in downtown Rapid City on Tuesday evening. 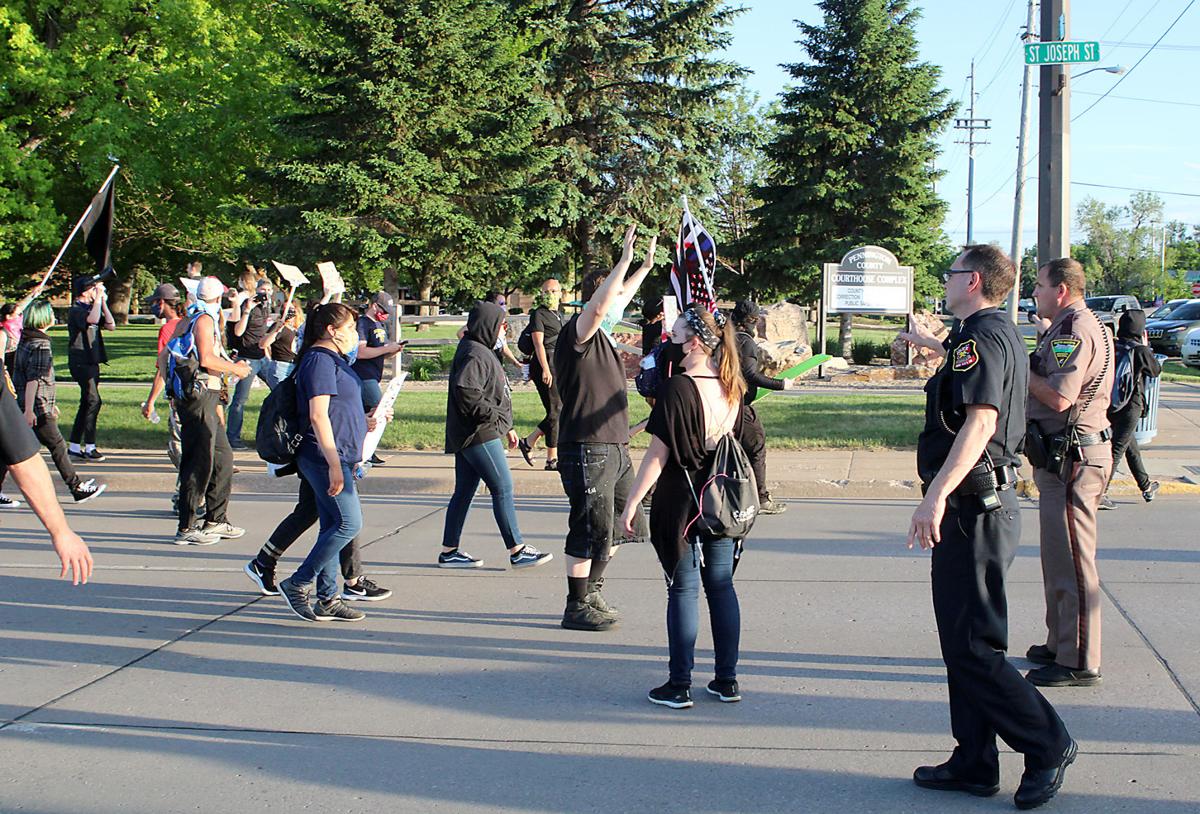 Protesters chant "I can't breathe" while lying on St. Joseph Street in front of the Pennington County Courthouse on Tuesday evening. Two people involved in this demonstration were arrested. 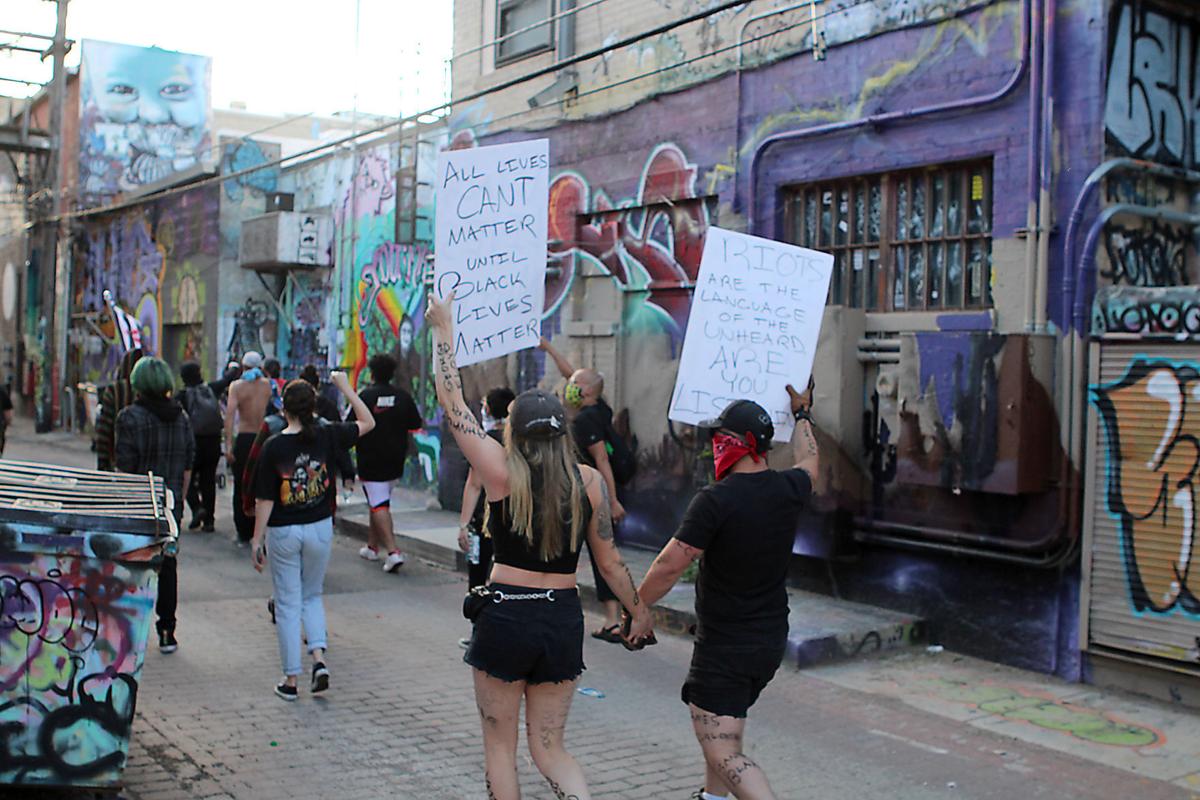 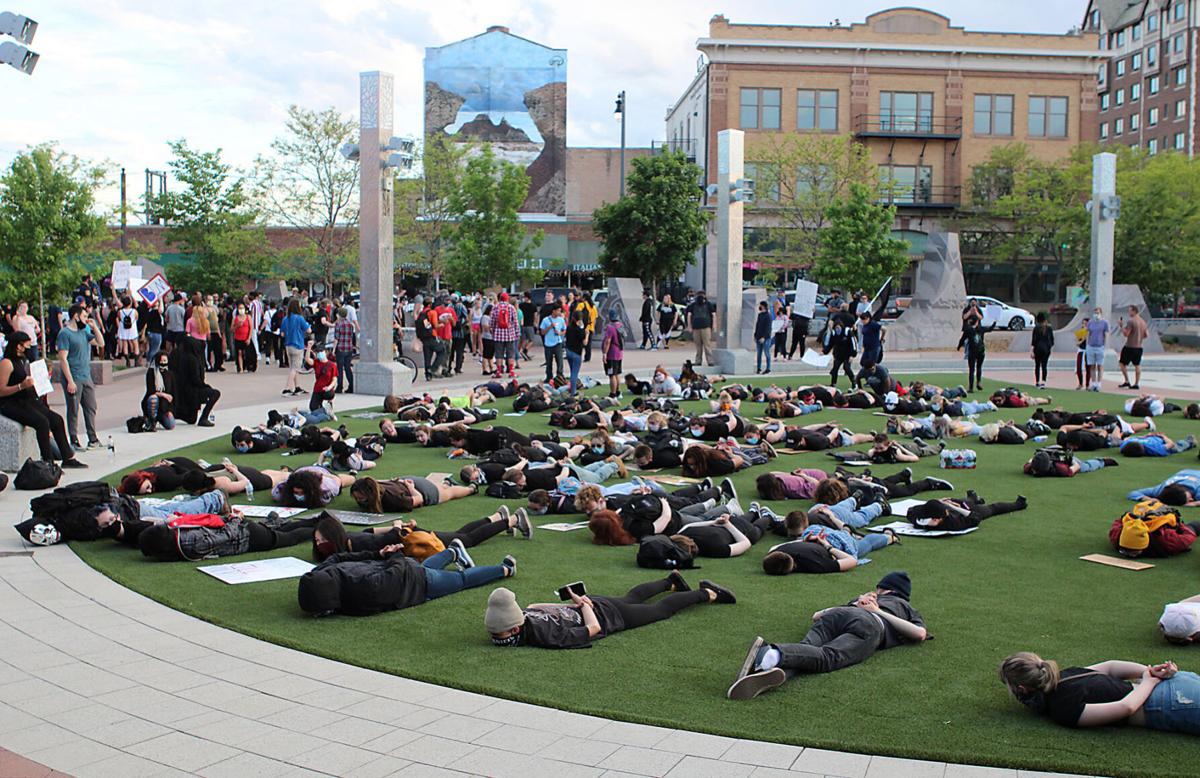 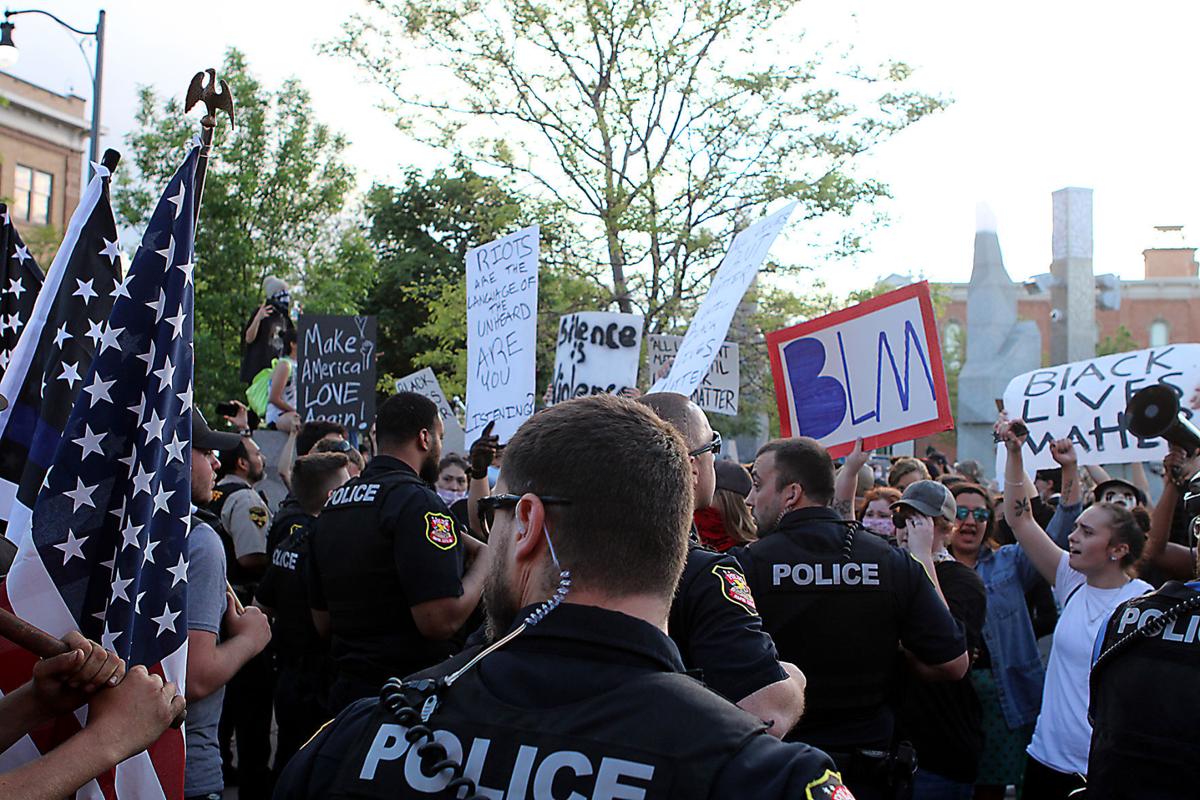 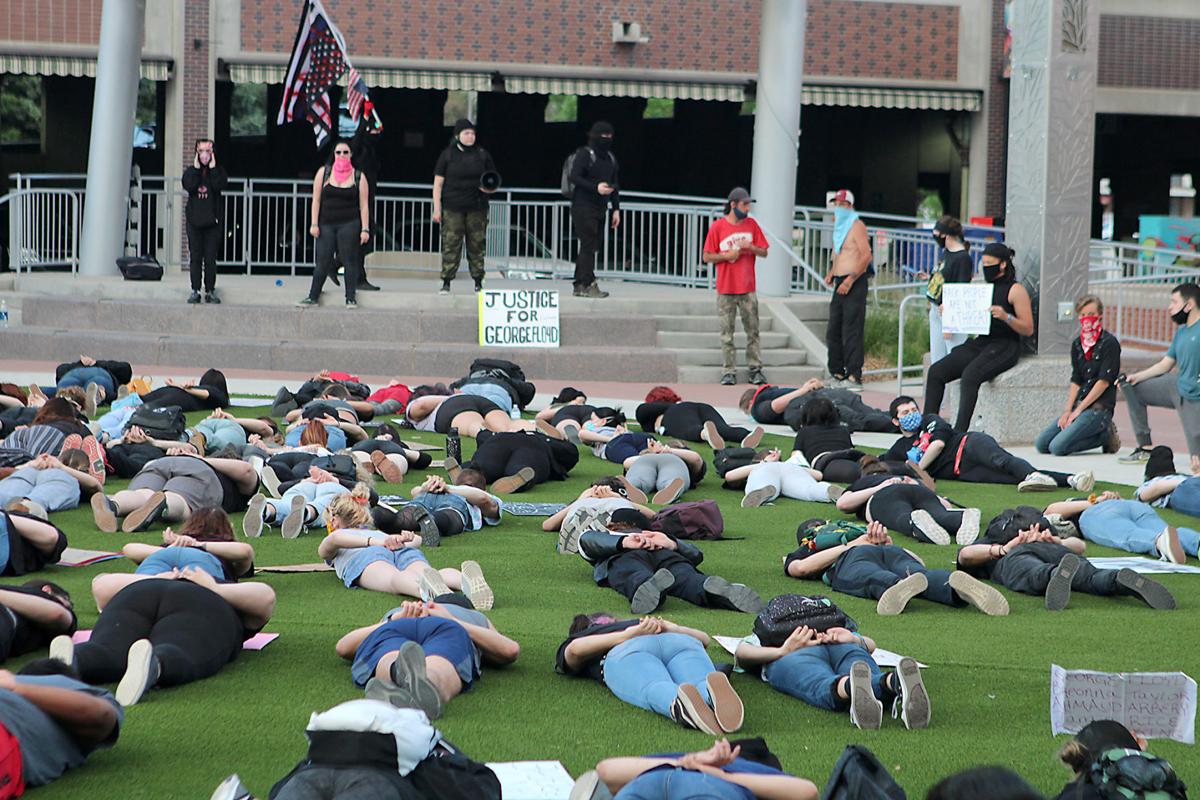 The Rapid City Police Department says five Black Lives Matter protesters were arrested Tuesday evening after blocking traffic, but the department is also frustrated by counter-protesters who are agitating protesters.

“We need to intervene when people are creating a public safety hazard,” police spokesman Brendyn Medina said Wednesday. Lying down in the street or trying to stop traffic at night is “very hazardous” and officers had to react at a moments notice to keep protesters and drivers safe, he said.

Officers were “running at a sprint to get between protesters and counter-protesters” when the latter arrived, Medina said. “Anybody on the ground will recognize” they were trying to escalate things.

He said the BLM demonstrators were about to leave but some decided to keep protesting for another two hours after counter-protesters yelled obscenities at them while driving by in trucks. That was “the least helpful thing anybody could do in that moment,” Medina said.

Medina said counter-protesters have the right to free speech and assembly just like protesters do, but it would be helpful if they did so elsewhere.

“There’s so much city for both to occupy,” he said. “Why do you have to go out of your way to come to an area where you know the other group is?”

The protest in memory of George Floyd and against police brutality began just before 7 p.m. at Main Street Square, Medina said in a press release. Police arrived to monitor the group.

About 200 people walked to the courthouse, demonstrated, and then attempted to occupy Saint Joseph Street, the release says. A man with a bullhorn led the group into the street and he and others lied down in the roadway.

“This forced police to block and divert traffic for the safety of the demonstrators,” Medina wrote.

Officers told the group to leave the road and the group left to protest at the Public Safety Building and then at Main Street Square.

“At one point after returning to Main Street Square, the demonstrators were engaged by a group of counter-protesters,” Medina wrote. “Law enforcement had to intervene in order to ensure the situation did not escalate further” and the counter-protesters eventually left.

As the protest was about to wrap up, officers spotted the man with the bullhorn, the arrest says. They arrested the 19-year-old from Rapid City and charged him with disorderly conduct and assembly.

This is also when some of the counter-protesters began driving by and yelling from their trucks, and 50-60 protesters re-assembled and continued marching.

The group went back to the courthouse and then to Memorial Park. As they headed southbound onto Mount Rushmore Road and then east onto Saint Joseph Street, several people entered the roadway in an attempt to block vehicles that had a green light, Medina said.

“Those seen engaging in this dangerous behavior were detained and arrested” and “the group was declared an unlawful assembly” near Saint Joseph and 7th streets, the release says.

Police declared an unlawful assembly because “despite repeated warning about unlawful behavior over public address systems, members of this group continued to engage in unlawful behavior,” Medina wrote. “Even after making arrests of the unlawful and downright dangerous behavior, members of the group continued to engage in the same behavior. It was clear that no amount of police intervention was going to convince the demonstrators to discontinue this behavior if they stayed as a group. This is why the group was asked to disperse.”

The group eventually broke up near Saint Joseph and 6th streets. Police later arrested an 18-year-old Rapid City woman who was previously seen laying in the roadway in front of the courthouse. She was charged with disorderly conduct.

Medina said he would need to speak with the arresting officers when the Journal asked why police couldn’t temporarily detain and cite the protesters rather than book them into jail given their minor charges and the coronavirus pandemic.

The “immediate priority was removing these people form creating further danger to a large group of people,” he said. Our goal is the “protection of all people ... we’re not out there to arrest our way out of this protest.”​

Counter-protesters drive past Black Lives Matter protesters at the intersection of Saint Joseph and Sixth streets in downtown Rapid City on Tuesday evening.

Protesters chant "I can't breathe" while lying on St. Joseph Street in front of the Pennington County Courthouse on Tuesday evening. Two people involved in this demonstration were arrested.