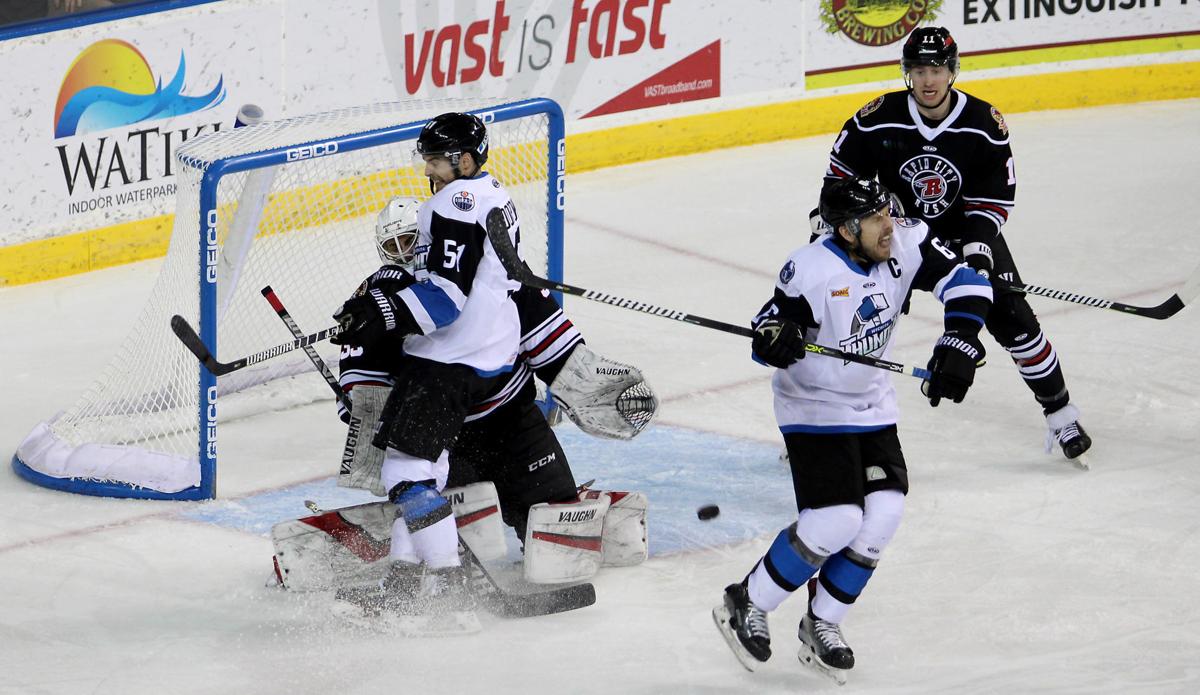 Wichita's Spencer Dorowicz is called for goalie interference against Rapid City's Alex Sakellaropoulos Sunday afternoon. The infraction caused the ensuing Thunder goal to be waved off.

Rapid City's Stephane Legault makes a move toward the goal in the first period Sunday afternoon. Legault scored the first of five goals for the Rush. 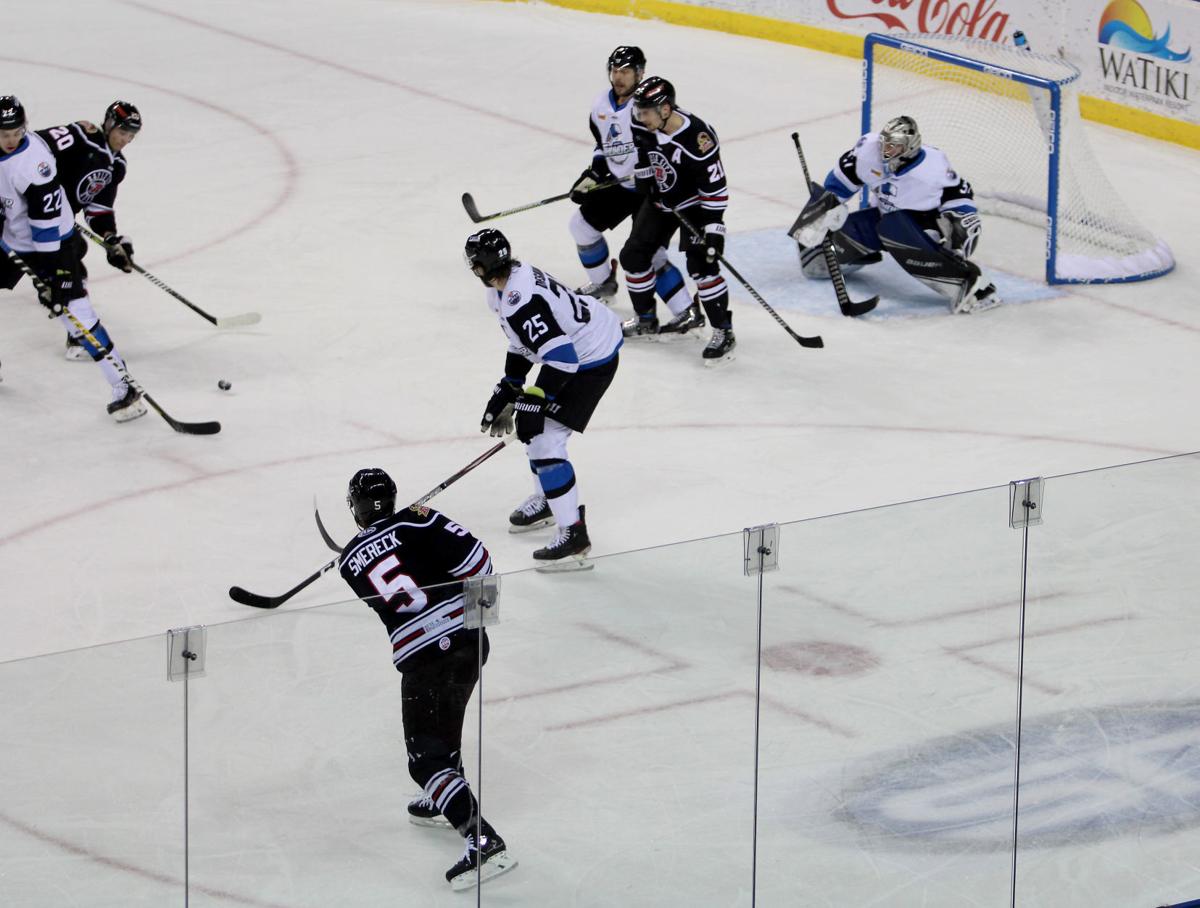 Rapid City defender Jalen Smereck fires a perfect pass to Brennan Saulnier for the Rush's second goal of the first period. It was Saulnier's fourth goal in two games.

While every hockey win is worth two points in the standings, some of those two-pointers just seem bigger than others. Sunday’s Rapid City Rush 5-2 win over the Wichita Thunder at the Rushmore Plaza Ice Arena definitely had that feel.

Particularly after the Rush had coughed up a two-goal third period lead — and surrendered five goals in the process -- in Saturday’s 7-3 loss.

With a four-point swing on the line between the two Mountain Division rivals battling for fourth in the conference and the playoff spot that comes with it, the Rush rebounded from Saturday’s disappointing loss with an aggressive opening on Sunday.

Rapid City was quickly rewarded, as Stephane Legault put the Rush on the board just 1:56 into the contest, a goal resulting from some gritty work on the end boards. Gaining possession behind the net, the Edmonton, Alberta, native slid the puck toward the front of the net where it deflected off Thunder goalie Mitch Gillam and into the net. Matt Ustaski and Ryker Killins earned assists on the goal.

“Actually, I was just trying to create something and didn’t think it would even go in,” Legault said. “I just thought I would throw it on net and somebody would be there and get the rebound. It was good that we scored early. That first goal kind of led the way, and I was just lucky to get it tonight.”

Rapid City went up 2-0 with 1:59 remaining in the opening frame when Brennan Saulnier added a power-play goal, converting a wrist shot from mid-slot off a nice centering pass from defenseman Jalen Smereck. Carrying a hot stick in recent games and coming off a three-goal performance the previous night, the goal was Saulnier’s 18th of the season. Assisting on the play was Jalen Smereck, who extended his current scoring streak to four games.

In the second period, a Rush penalty 25 seconds in allowed Wichita to quickly draw within 2-1 on a Stephan Fournier power play goal.

Wichita threatened to draw even when Rush penalties setup a 5-on-3 Thunder power play. The Rush penalty kill unit was aided by a couple of big saves by goalie Alex Sakellaropoulos to stave off the equalizer.

“I would say the five-on-three, especially at that time in the game, was huge for us,” said Sakellaropoulos, who saved 38 of 40 shots. “It would have been a momentum swing had they been able to score and who knows what might have happened. But the guys were blocking shots and I made the saves I had to make, and I thought that definitely brought momentum back on to our side.”

Given the fact that the Rush have been out-scored 7-1 in the third period in the series, a 2-1 lead heading into the final frame might have seemed precarious.

Fortunately, a goal by defenseman Dane Birks, his second of the season, with 15:24 remaining helped ease concern, another by Tanner Karty, his third of the year, with at the 2:56 mark and an empty-netter by Keeghan Howdeshell following a Wichita goal cemented the win moving the Rush five points ahead of Wichita in the race for the final playoff spot with three games in hand.

“We learned from last night and came out and played really hard,” Rush coach Danny Tetrault said. “When we did have opportunities, we put the puck in the net. And “Sak” (goalie Alex Sakellaropoulos) played unbelievable. He made some big saves, timely saves and I’m happy for him to get the W. And we buckled down in the third period and played great. We struggled the past weeks with letting leads slip away but today we played gritty and made it happen.”

The Rush (24-17-3-0) travel to Boise next week to face-off against the Idaho Steelheads on Friday and Saturday.

Wichita's Spencer Dorowicz is called for goalie interference against Rapid City's Alex Sakellaropoulos Sunday afternoon. The infraction caused the ensuing Thunder goal to be waved off.

Rapid City's Stephane Legault makes a move toward the goal in the first period Sunday afternoon. Legault scored the first of five goals for the Rush.

Rapid City defender Jalen Smereck fires a perfect pass to Brennan Saulnier for the Rush's second goal of the first period. It was Saulnier's fourth goal in two games.