Rapid City is continuing to reform procedures for approval of tax increment financing districts with a proposed ordinance that would significantly restrict the use of the districts to finance infrastructure.

The city's Public Works Committee will take up the proposed ordinance change Tuesday, and the Legal and Finance Committee will address it on Wednesday. The public meetings will be held at 12:30 p.m. each day at City Hall.

In an April 2018 interview with the Journal, Young said Rapid City needs to "tighten up" the usage of TIF. 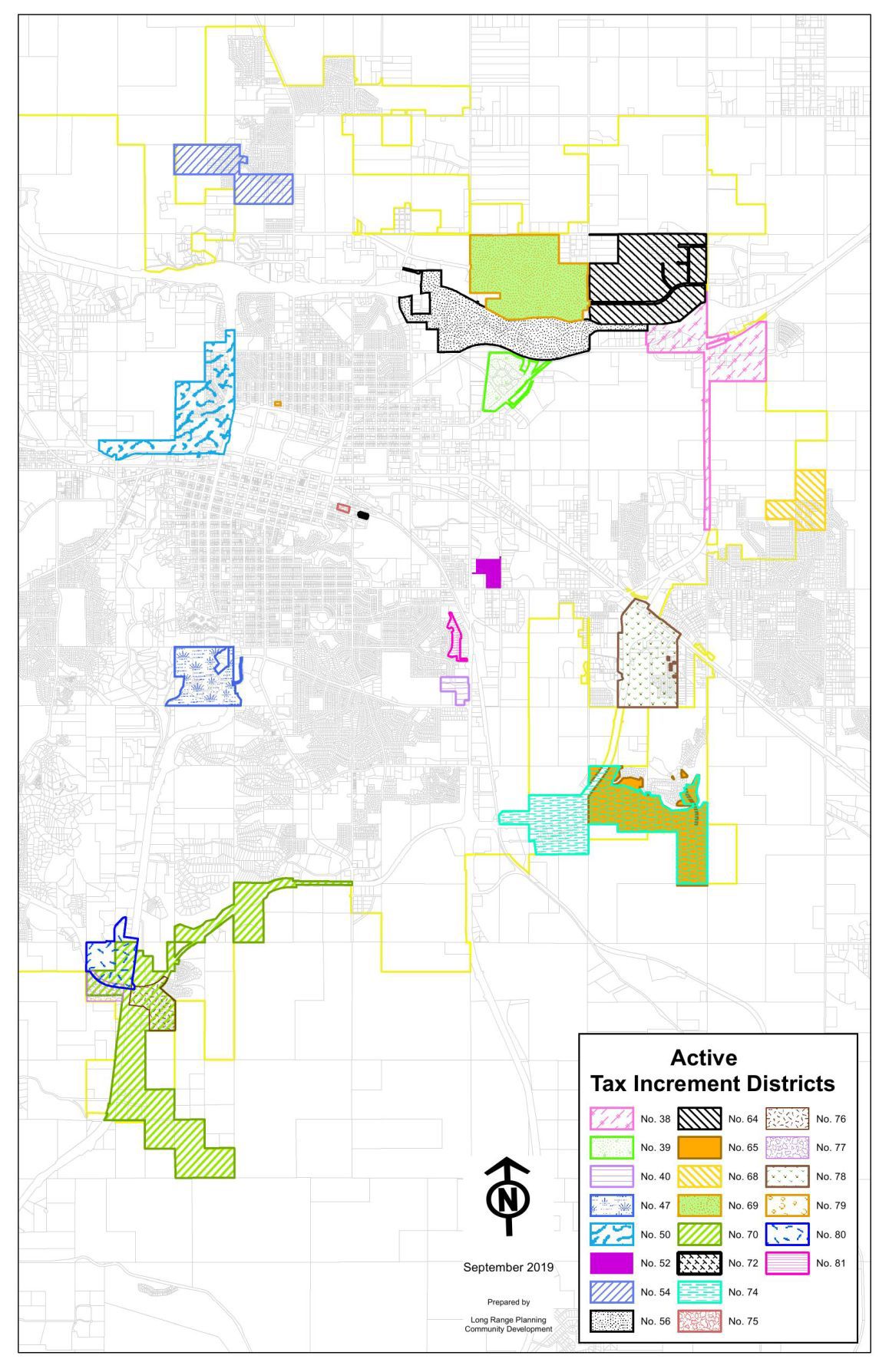 "Tax increment financing is one of the few tools that the city has available to assist and incentivize economic development. Some cities have and use additional tools, methods and funding that are unavailable here," Young said in an email sent to the Journal on Friday. "Also, the varied topography and soils that are unique to this area can sometimes create greater costs and needs for the development of public infrastructure than what Sioux Falls and other cities commonly have to deal with."

But instead of collecting the increased property tax payments and allocating them to the city, county and schools, the money is instead diverted to a fund to pay for project costs approved by the city council. Property taxes are still collected by the government but only for the amount related to the valuation of the property before the work begins, called the base valuation.

The additional tax payment monies related to the increased valuation are diverted toward the TIF’s pre-approved project. Theoretically, the diverted funds make it possible for a project that would have otherwise been unfeasible to move forward.

Young said the largest financial TIF district is in southeast Rapid City, specifically the extension of Minnesota Street from south and west of Elks Country Estates to east of Elk Vale Road. That area, TIF District 65, was approved in September 2007 for a maximum certified amount of nearly $34 million. 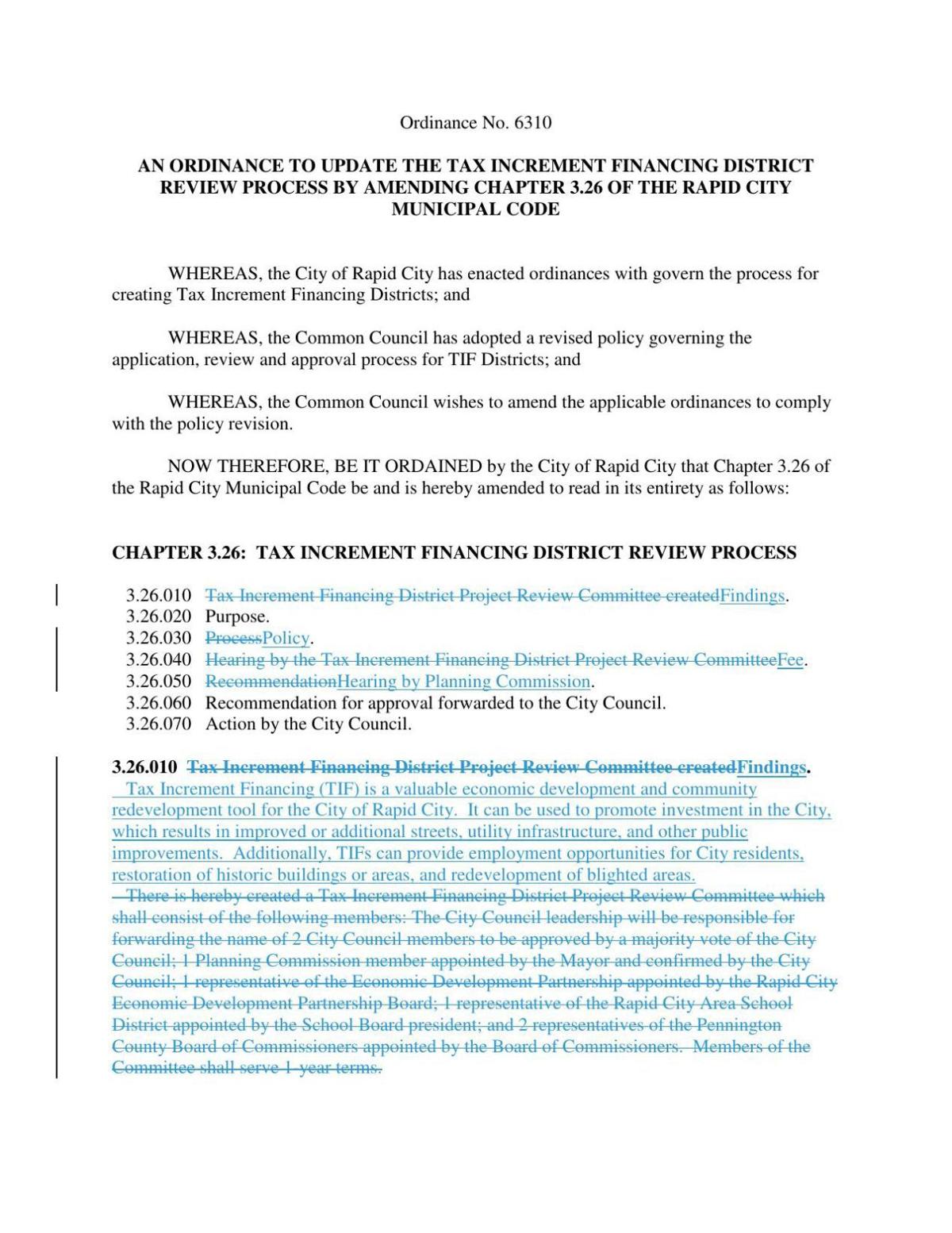 Under current regulations, an application for tax increment financing is presented to the city, a review committee would hold a public hearing about the proposal prior to it going to the planning commission and city council. The review committee is comprised of two city council members, a member of the city's planning commission, a representative of the economic development partnership board, a representative of the Rapid City Area School District, and two members of the Pennington County Board of Commissioners.

The proposed ordinance would eliminate the Tax Increment Financing District Project Review Committee, and replace it with a TIF Review Team as well as a third-party independent review of the development's feasability.

"The concern with the current process is that the public (and ultimately, politics) gets involved too early in the review and approval process of proposed TIFs, which takes away from effective negotiation with the applicants," Young told the Journal on Friday.

"State law does not require, nor is it practiced elsewhere in the state, to have a public hearing prior to the Planning Commission meeting review. In our review with how other cities in the state perform TIF application processes, it was recommended to us by the cities of Sioux Falls, Aberdeen and others that we remove the public scrutiny of the proposal before it has been fully vetted and is schedule for the required public hearing at Planning Commission, where the correct public notice is given."

Once the third-party independent review has been completed and the TIF Review Team performs the needed review and negotiations, the application would be presented and reviewed by Rapid City Area Schools and Pennington County Board of Commissioners.

"Any issues or concerns they identify will be addressed by the city committee and ultimately the planning commission and city council," Young said.

I think we need to rethink the hanging of stuff on the Presidents downtown. Please donate your things to the Corner Stone Mission on Main Stre…