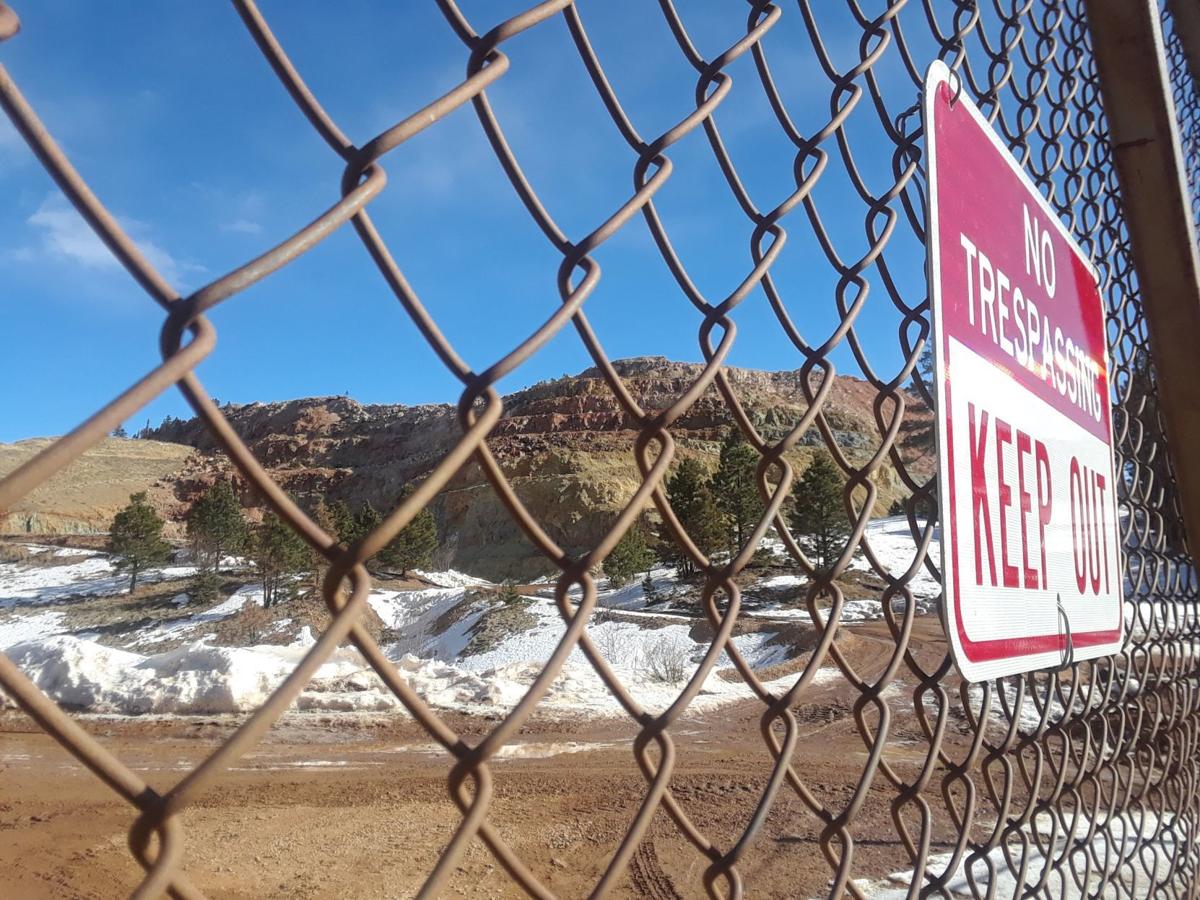 A view through the front gate of the Gilt Edge Mine near Lead. 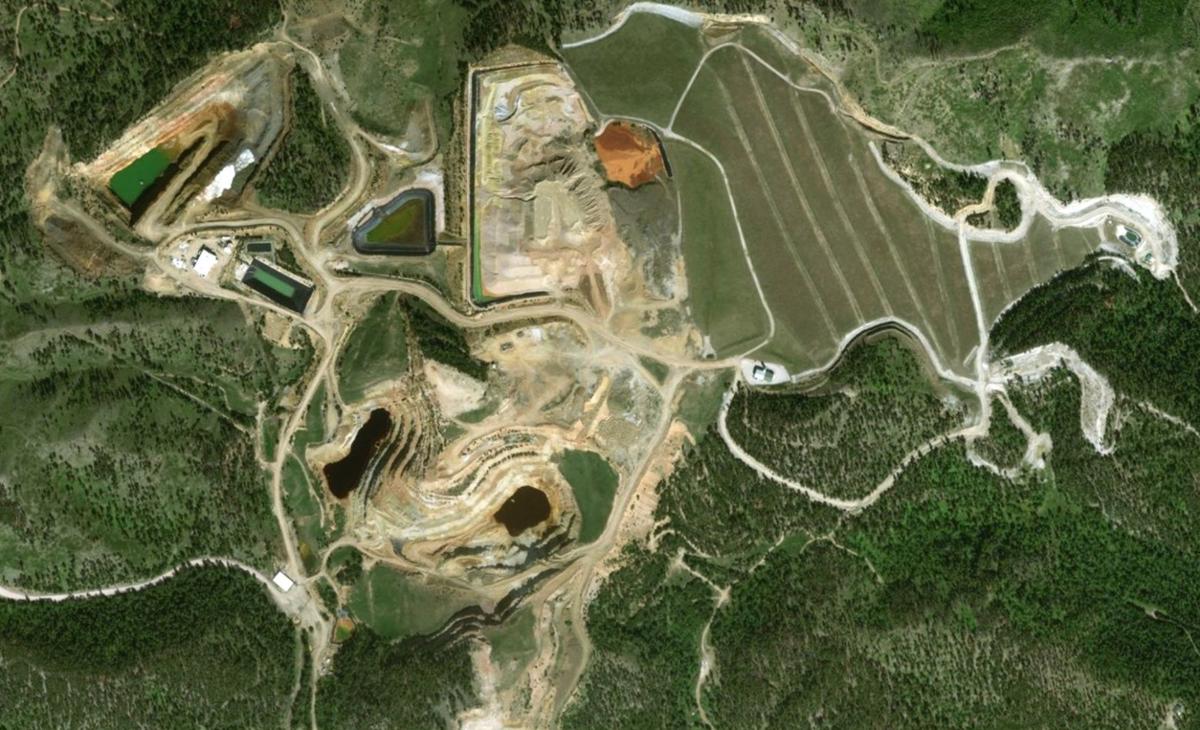 An aerial view of the Gilt Edge Mine. 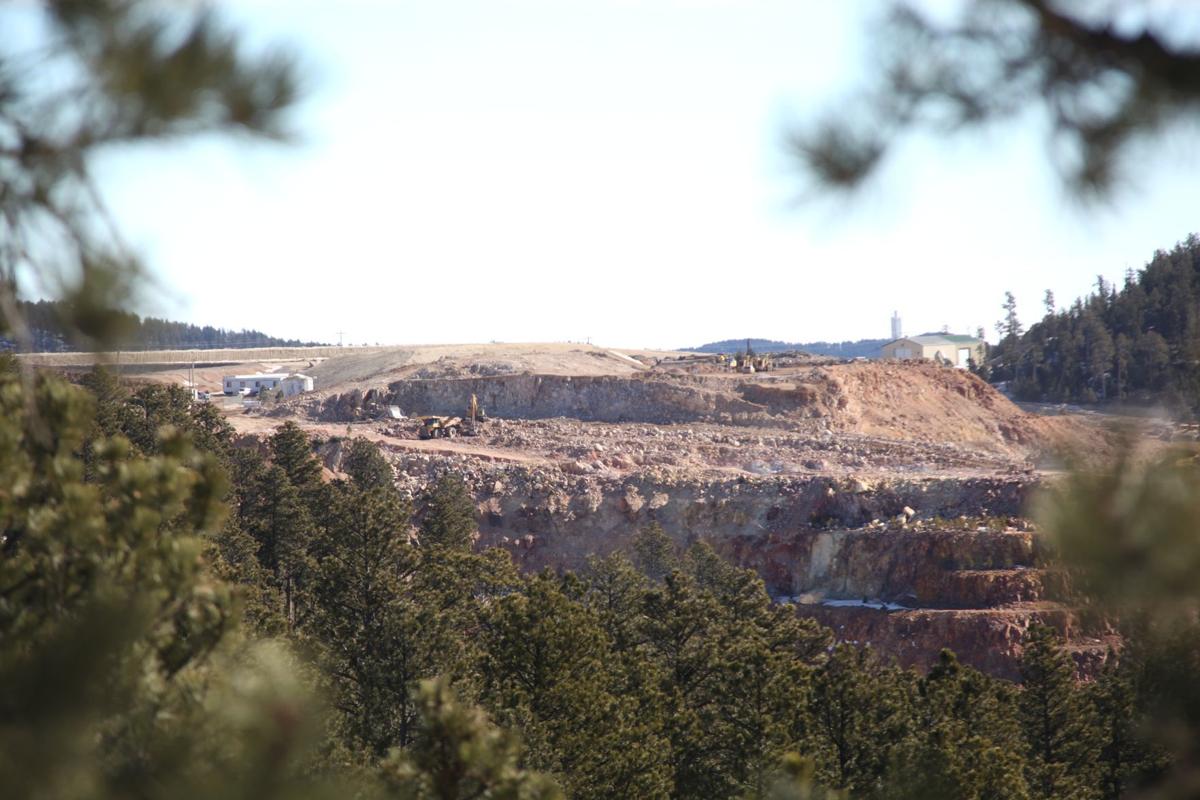 The Gilt Edge Mine, as seen at a distance from Gilt Edge Road. 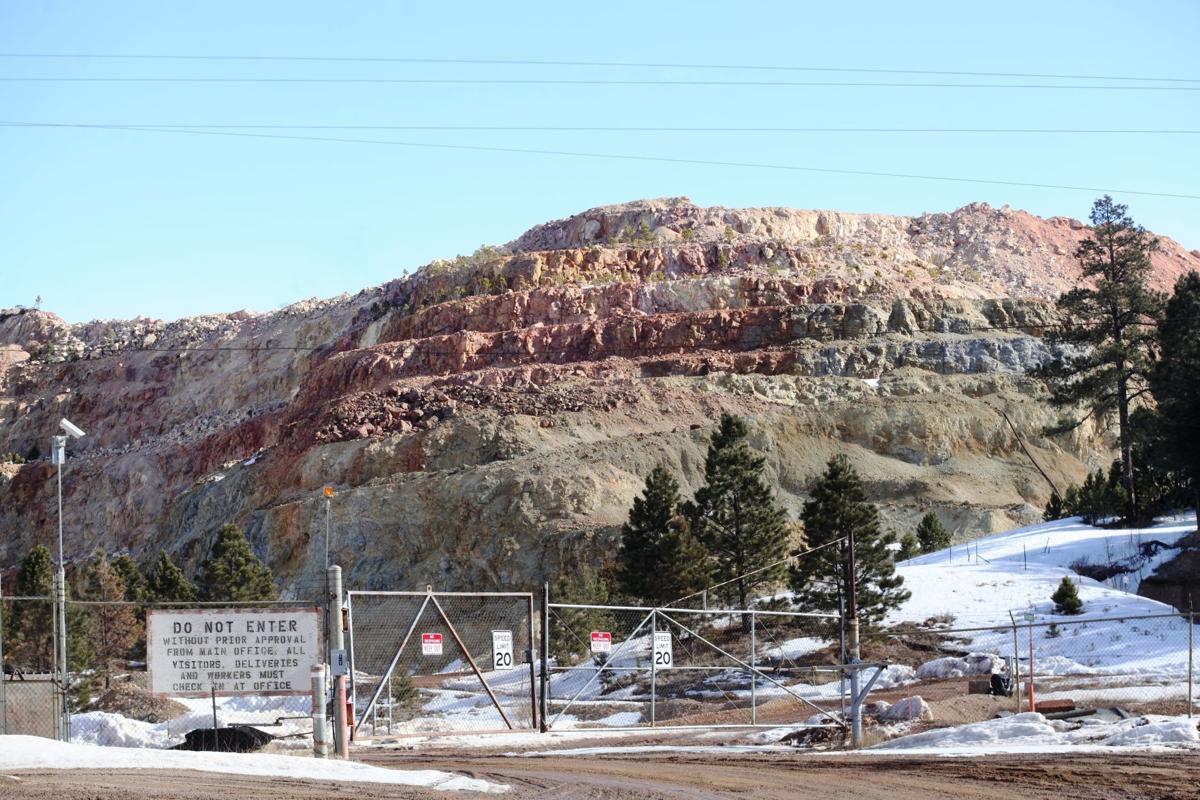 The view from the small parking lot near the front gate of the Gilt Edge Mine. 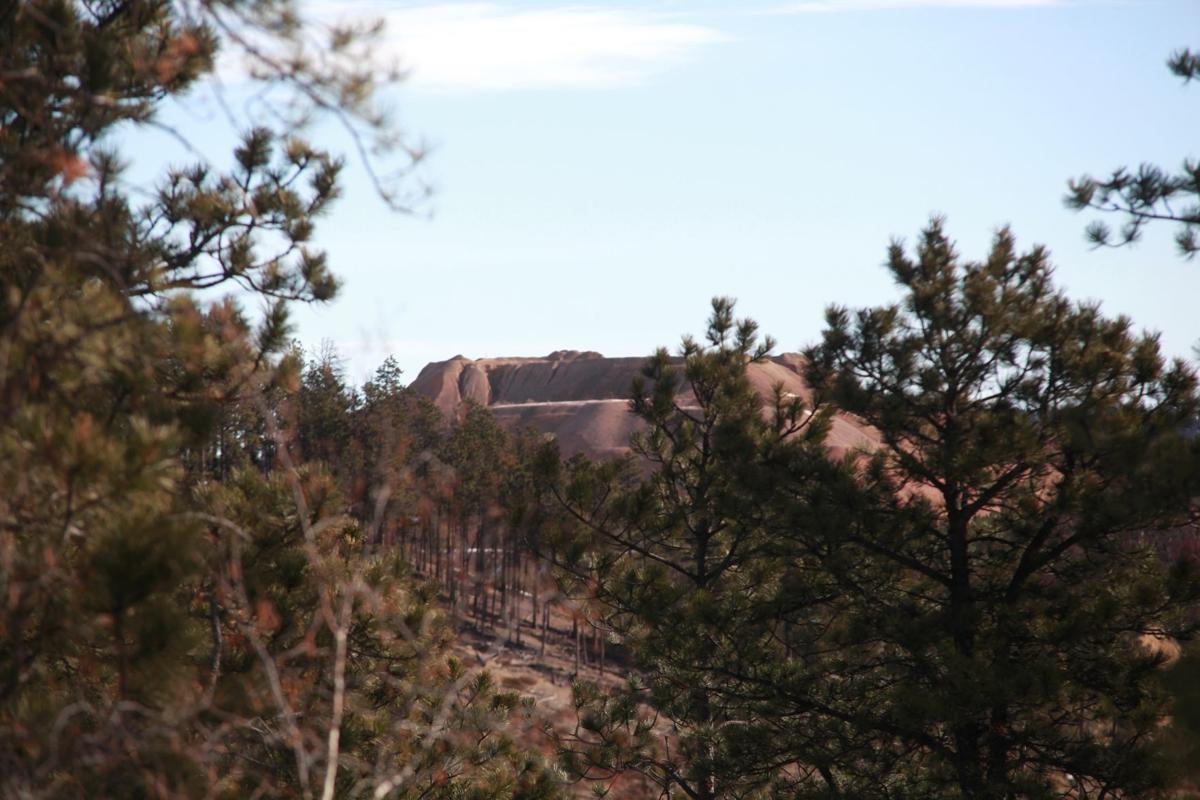 Crushed rock on the heap-leach pad at the Gilt Edge Mine. 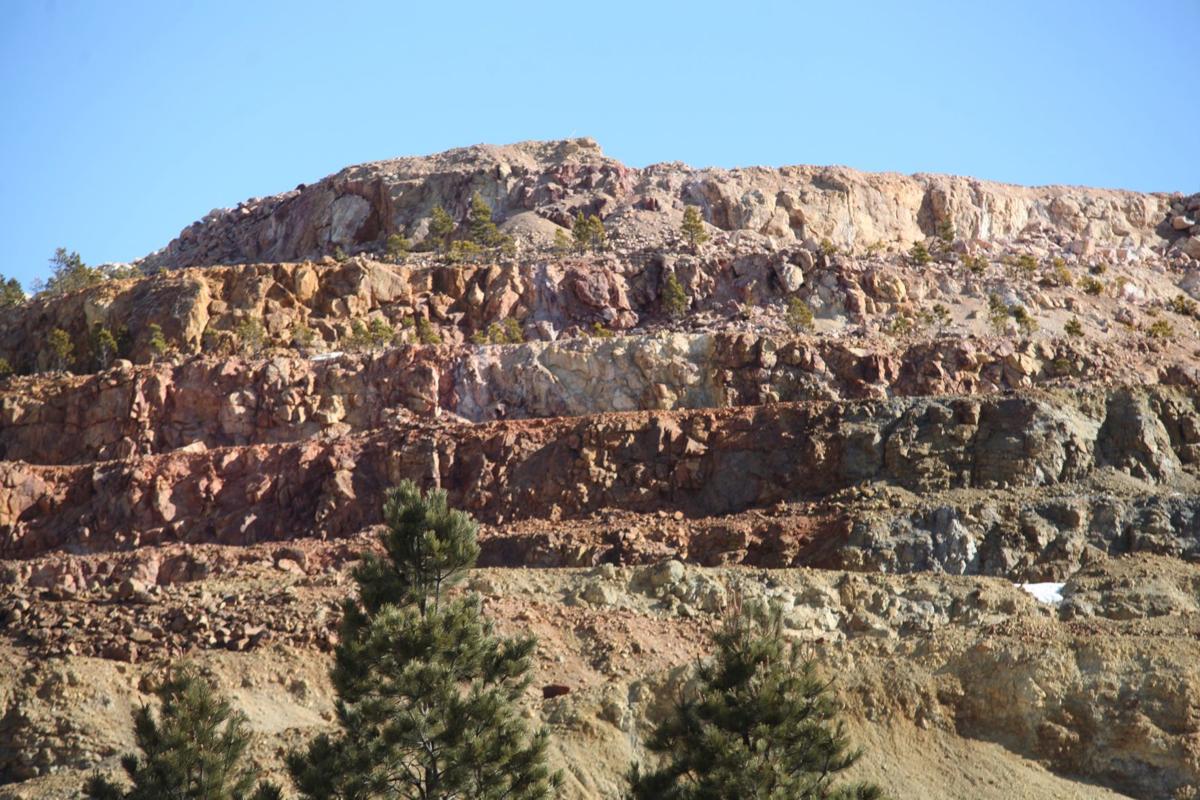 Exposed rock behind the front gate of the Gilt Edge Mine.

At the site of an ongoing $200 million cleanup of an abandoned gold mine near Lead, national and state regulators are entrusting a water-pollution study to a company that is potentially interested in reopening the mine.

The U.S. Environmental Protection Agency and the South Dakota Department of Environment & Natural Resources have struck an agreement with Agnico Eagle Mines, a publicly traded company headquartered in Toronto, Canada. The agreement authorizes the company to investigate the sources of toxic cadmium contamination in Strawberry Creek at the Gilt Edge Mine.

“We are not environmental specialists,” Loptien said in a phone interview with the Rapid City Journal. “We will be hiring contractors, and that is their job.”

Agnico will simultaneously try to determine whether there is enough gold remaining in the mine to reopen it.

“Our interest in this area was piqued because a geologist who works for us also worked at the Gilt Edge Mine,” Loptien said, “and he recalled a lot of mineralization left there when it shut down.”

The mine’s last operator, Brohm Mining, had plans to expand its 360-acre operation before the bankruptcy of Brohm’s parent corporation caused the abandonment of the Gilt Edge Mine in 1999.

If Agnico decides it wants to reopen the mine, it would have to go through a permitting process. And if Agnico earned the necessary permits, the company would probably be held responsible for the eventual reclamation of the entire site, Loptien said.

Joy Jenkins, remedial project manager for the EPA, said the potential future reopening of the mine could relieve taxpayers of reclamation expenses on land that is already scarred by past mining. For now, she stressed that the agreement with Agnico is for information-gathering only.

“This agreement does not allow re-mining,” she said.

The South Dakota DENR, in a written response to Rapid City Journal questions, also cited the potential future transfer of reclamation expenses to Agnico as a reason for entering into an agreement with the company for the cadmium investigation.

"Because of the ongoing current and future costs, DENR continually looks for ways to reduce site operation, maintenance, and reclamation costs, which ultimately reduces federal and state taxpayer costs," the DENR's statement said. "The settlement agreement provides a first step in looking at the potential for a site redevelopment project that could be beneficial for site reclamation and decrease the cost to EPA and the State."

A frequent critic of mining, Lilias Jarding, of the Black Hills Clean Water Alliance, is skeptical about Agnico's involvement in the water-pollution study.

“There’s obviously going to be mixed motives there, because a mining company exists to mine,” Jarding said in a Journal interview.

The Gilt Edge Mine is 5 miles southeast of Lead. Mining at Gilt Edge began in 1876 and continued intermittently until 1999, when Dakota Mining, the corporate parent of Brohm Mining, declared bankruptcy in Canada.

When Brohm abandoned the mine, the company left behind pits containing a combined 150 million gallons of acidic water laden with lead, arsenic and cadmium.

In 2000, the EPA added the mine to its National Priorities List, which made the cleanup eligible for money from EPA’s Superfund. Studies and cleanup work have been ongoing ever since at the mine, which is now mostly state-owned, Jenkins said.

Jenkins said about $120 million has been spent so far on the cleanup, and projections indicate future costs of roughly $80 million, bringing the projected total cost to $200 million. Most of the money has come from the federal government, although settlements with past operators of the mine have recouped about $40 million, and the state of South Dakota has contributed $6.4 million as part of a mandatory 10 percent match for certain Superfund costs.

Brohm mined the Gilt Edge by the heap-leach method. Rock was excavated from large pits and then crushed and piled in a massive heap. Cyanide was used to leach the gold out of the rocks.

Ongoing cleanup work at the mine includes the operation of a water treatment system that captures an average of 95 million gallons of acid rock drainage annually. Jenkins, of the EPA, said the mine will probably require water treatment “forever,” because groundwater and precipitation at the mine are continually contaminated by exposed minerals such as pyrite, which makes the water acidic.

Other cleanup work has included the reclamation of the Ruby Gulch waste-rock pile, which was regraded, given an impermeable protective layer and covered with soil and vegetation. One of the three open pits at the site has been partially backfilled.

The new agreement between the EPA, the state and Agnico for the cadmium investigation comes at a time of heightened public awareness of the gold industry in the Black Hills.

Thursday, South Dakota regulators announced that an exploratory gold drilling operation west of Lead near the rim of Spearfish Canyon, conducted by the South Dakota-registered company VMC LLC, was fined $11,000 for permit violations including a hole that was drilled 700 feet deeper than allowed.

Meanwhile, a Canadian company, Mineral Mountain Resources, is encountering litigation and protests as it conducts exploratory gold drilling near the community of Rochford, about 20 miles south of the Gilt Edge Mine.

Jarding, of the Black Hills Clean Water Alliance, said she and other opponents of the Rochford-area gold drilling are trying to stop it from someday becoming another Gilt Edge Mine.

“The Gilt Edge Mine is a fine example of the problems that come with gold mining — it's a Superfund site, one of the most polluted places in the United States,” Jarding said.

Meanwhile, Coeur Mining has quietly continued to operate its Wharf Mine, the only active large-scale gold mine in South Dakota, just west of Lead near Terry Peak. In 2017, Coeur’s 207 Wharf employees mined 4.13 million tons of ore that yielded 96,431 ounces of gold and produced operating cash flow of $49.6 million for the company, according to the company's fourth-quarter financial report.

Agnico’s investigation will include taking samples of soils and sediments, and drilling boreholes to learn about fracture zones and groundwater flow, all with an eye toward informing a potential remedy for the cadmium contamination. The core samples collected during the drilling will also be used by Agnico to begin studying whether there is still recoverable gold at the mine.

The start date for the cadmium investigation is yet to be determined. Once begun, it is expected to last 18 months to two years.

“There is an environmental benefit that is happening in this agreement,” Jenkins said. “EPA is seeing this as a study that is going to help us advance a remedy.”

An exploratory gold driller in the Black Hills has agreed to pay an $11,000 fine after being caught drilling holes that were hundreds of feet …

No open cut by Rochford if gold found, execs say

Executives of a Canadian company say that if they find sufficient amounts of gold near Rochford, a mine would take perhaps a decade to open an…

A Canadian company that is exploring for gold near Rochford has drilled and capped its first hole, despite some protests and a court challenge.

The Cheyenne River Sioux Tribe said Thursday that three of its members have filed a lawsuit to stop exploratory gold drilling near Rochford.

The company that is searching for gold near Rochford is no longer seeking to pump water directly from Rapid Creek, because the company says it…

Pennington County will kick off 2019 with a set of public hearings regarding a controversial mining permit application.

State wants to buy more of abandoned Black Hills mine

The state of South Dakota wants to buy 266 acres of an abandoned mine site from the Black Hills National Forest.

Gold production declines at Wharf Mine

Production and sales were down about 20 percent last year at the only active, large-scale gold mine in the Black Hills, according to reports f…

A view through the front gate of the Gilt Edge Mine near Lead.

An aerial view of the Gilt Edge Mine.

The Gilt Edge Mine, as seen at a distance from Gilt Edge Road.

The view from the small parking lot near the front gate of the Gilt Edge Mine.

Crushed rock on the heap-leach pad at the Gilt Edge Mine.

Exposed rock behind the front gate of the Gilt Edge Mine.