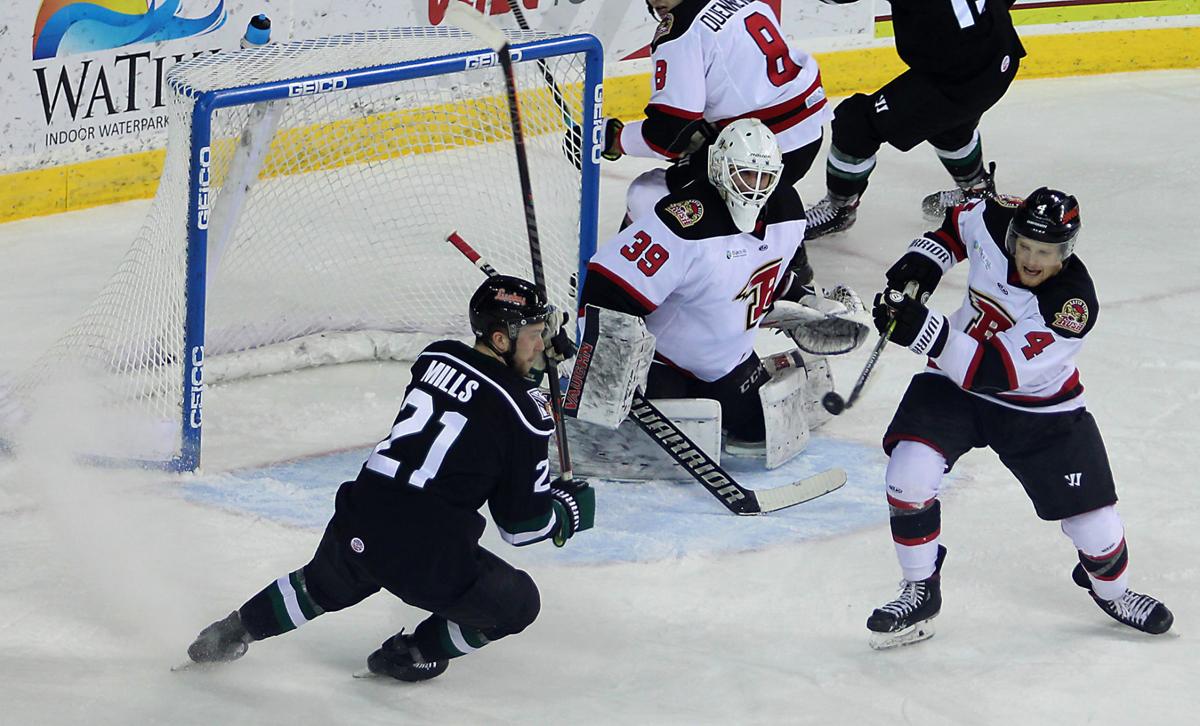 New Rapid City defenseman Joe Rutkowski gets his stick high to intercept a puck during the first period of the Rush's overtime win over Utah Friday night. The Rush gave up two early goals and trailed 3-0 at one point in the first period. They rallied to tie it up just before regulation. 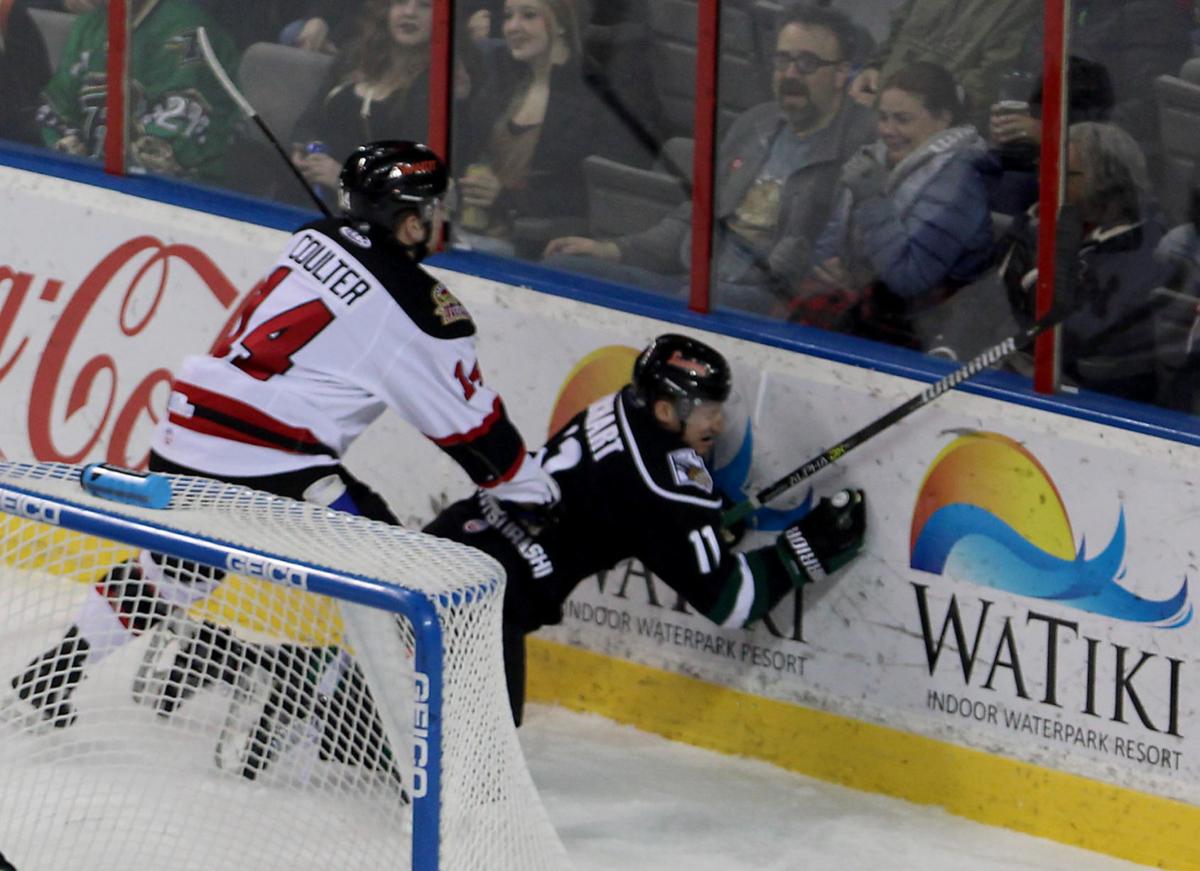 Rapid City's Tyler Coulter gets called for a major penalty in the first period of Friday night's overtime win over Utah. Coulter scored in the second and third periods to help the Rush draw even.

Some hockey wins result from superior play or favorable bounces of the puck. Others from a gutsy, never-say-die performance. Rapid City’s performance on Friday night at the Rushmore Plaza Ice Arena was just that as the Rush overcame a 3-0 first period deficit, rebounded again after falling behind 4-2 in the third frame and defeated the Utah Grizzlies 5-4 in overtime.

After a tying goal by Tyler Coulter, his 22nd and second of the game, with 43.7 second remaining, Darian Romanko drilled the game-winner on a one-timer off a Brennan Saulnier pass to cap off the thrilling comeback.

“It was a little inside off Brennan’s behind the back pass, and I got as much as I could on it and it was a little bit of a changeup and maybe got the goalie off guard a little bit,”  Romanko said. “We were playing super well after giving up those quick early goals and then just kept playing hard. With the trade deadline last week, we have solidified out roster and everything has been positive in the room and we showed it on the ice tonight.”

A shaky start appeared to doom the Rush on Friday night as Utah lit the lamp a mere 55 seconds into the game, Jack Jenkins swiped the puck at center ice and went uncontested to the slot and scored on a back-hander to put the Grizzlies up 1-0. Two and a half minutes later, Japanese National team member Yuri Terao scored on a off Tyler Parks skate.

The two quick goals signaled the end of the night for Parks as Gordon Defiel came entered in relief.

“A bad turnover on the first one kind, a soft goal on the second one and that’s why I had to make a goalie change,” Rush coach Danny Tetrault said. “But after that the guys never got discouraged. They had the mindset that we are playing good and we are going to come back. And when you have that mentality with positive body language and they got rewarded.”

A Rush penalty proved costly with 7:54 remaining in the period as Tyler Coulter drew a five-minute boarding major and with coincidental penalties in effect as well, Utah upped the margin to 3-0 (4:44) catching the Rush up-ice on the four-on-four situation.

Still short-handed off the major penalty, Rush captain Peter Quenneville gave the Rush a breath of life tallying a short-handed goal with a wrister top-shelf, near post from the right face-off circle to close out first period scoring. Quenneville’s unassisted goal was his 24th of the season

Down 3-1 heading into the second frame, and the next goal crucial, the Rush responded with a solid period of hockey on both ends of the ice. With 4:27 remaining, the Rush were rewarded as Saulnier led the rush and rifled a tape to tape pass to Coulter who deked Utah goalie Martin Quellette and shoved the puck into an open net.

An unfortunate stretch early in the third period appeared to doom the Rush as after killing off a Ryker Killins penalty, the Rush were unable to clear the zone, and defenseman Eric Williams expanded the Utah lead to 4-2.

Saulnier answered tapping in a loose puck from the low slot, his 22nd goal of the season, with 5:07 closed the gap to 4-3 and setup Coulter’s tying goal in the final minute. And Romanko’s heroics thereafter.

“I don’t think I’ve ever seen seven players in the crease at once, but that’s what it was and I was just the lucky guy that the puck came to me and I had a no-doubter,” Coulter said. “We are starting to find that start of the year magic and it doesn’t matter what the score is and some nights it works out for us. We’ve added quite a few pieces recently, and I think this shows the character of this team.”

Defiel saved 17-of-19 shots to record his fifth win of the season.

The win allowed Rapid City (29-24-5-1, 64 points) to draw even with Tulsa for the fourth and final ECHL playoff spot in the Mountain Division.

The Rush and Utah conclude the weekend series on Saturday night (7:05).

New Rapid City defenseman Joe Rutkowski gets his stick high to intercept a puck during the first period of the Rush's overtime win over Utah Friday night. The Rush gave up two early goals and trailed 3-0 at one point in the first period. They rallied to tie it up just before regulation.

Rapid City's Tyler Coulter gets called for a major penalty in the first period of Friday night's overtime win over Utah. Coulter scored in the second and third periods to help the Rush draw even.