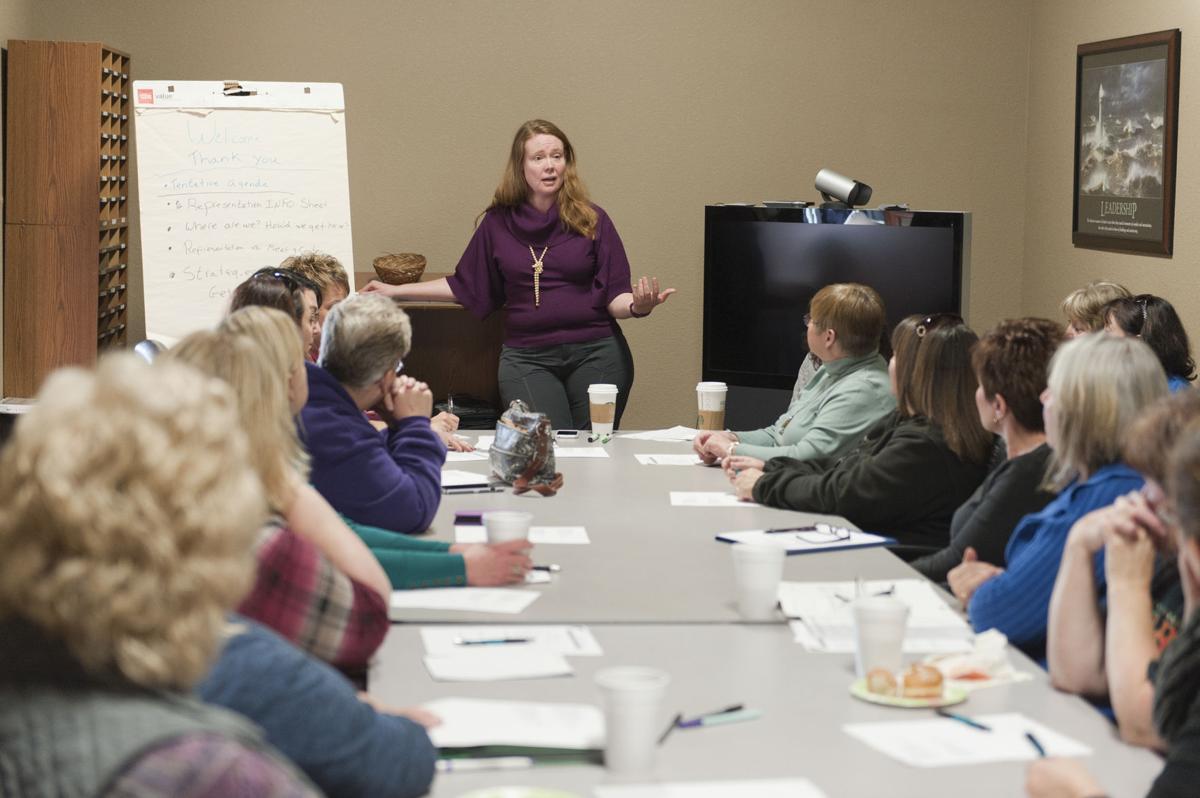 UniServ Director Fran Linn leads a meeting of paraprofessionals with the Rapid City Education Association on Wednesday morning to discuss a recent move by the school board to decertify the paraprofessionals. 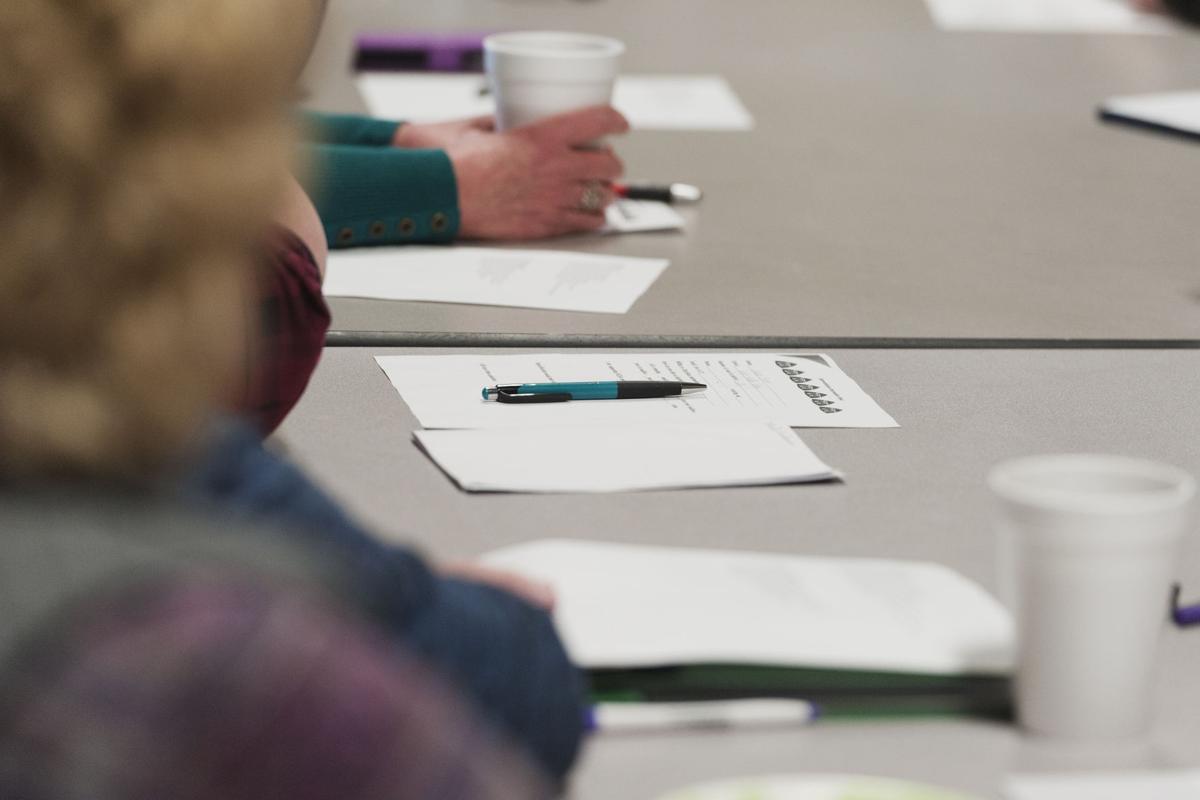 Working behind closed doors, the Rapid City School Board has again filed paperwork to break up an employees' union.

The board sent a petition to the state’s Department of Labor last week to decertify union representation for the district’s paraprofessionals.

Around this time last year, the school board filed to decertify Teamsters Local 120, the union that represented support services employees, such as custodians and bus drivers. The local dissolved shortly thereafter.

The board’s most recent action sprouted from a discussion held during an executive session, a type of meeting that is closed to the public. The move has triggered a to-be-scheduled election in which the paraprofessionals will vote whether they want the Rapid City Education Association — the teachers' union — to continue representing them, as it has for more than 20 years.

Paraprofessionals assist teachers in the classroom by focusing on individual students who need extra academic help, often because they have special needs such as a developmental or learning disability.

According to district officials, the idea to decertify came from within the paraprofessionals’ ranks, from people who were frustrated with last year’s contract negotiations, which never took place because of an error by the union’s bargaining team.

The Journal could not find any paraprofessionals dissatisfied with the union who were willing to speak on the record, but Virginia Montcrieff thinks dissolving the union would be a mistake that would be difficult, if not impossible, to reverse.

Montcrieff, 54, has been a paraprofessional in the school district for 19 years. She worries that if the union goes away, she and her co-workers will be without a voice.

“We do this job because we love the kids. We’re not doing it to get rich,” Monctrieff said. “Some amazing people do this job. We need support from this district, and we’re not getting it.”

There are state and federal rules in place that govern how employers and collective bargaining groups, or unions, deal with each other before, during and after contract negotiations.

“Once a collective bargaining representative is gone, there really aren’t any rules,” said James Marsh, director of the labor and management division at the South Dakota Department of Labor. “If they aren’t unionized, the employer can say, ‘Take it or leave it.’ They don’t have to discuss it with anyone.”

When Deborah Goodart started working as a paraprofessional for the Rapid City school district, she told her husband she would keep the job only until she could find a better one.

That was nearly 30 years ago.

Most paraprofessionals in Rapid City make between $11.73 and $15.20 an hour, but Goodart and others say the rewards of helpings kids in need far outweigh the meager wages.

“I’ve given my life to this job,” she said. “Besides raising my own kids, it really has been my life’s work.”

Which is why Goodart said it hurt when she learned the school board had filed a petition to take union representation away from the paraprofessionals.

A longtime member of the union, Goodart remembers how things were in the 1980s, when the paraprofessionals didn’t have anyone to represent their interests.

“We had no benefits, no sick time, nothing,” she said. “I don’t think we want to go back there.”

Contract negotiations between the paraprofessionals and the school board never happened last year because a member of the union failed to file a letter of intent to negotiate. Without the letter, the board refused to bargain over salaries, and the paraprofessionals had to take the first offer put on the table.

District officials say the union’s failure is why some paraprofessionals would like to see it dissolved. Those are the voices that school board president Jim Hansen said he was listening to when the decision was made to try to decertify the paraprofessionals.

“Because people of their own group asked for that, the board said, ‘Yes, we’ll do that,’” Hansen said, adding that he believes the school board is helping the paraprofessionals.

“They have to take ownership of their union and get people to follow through and come to the table,” he said. “This is completely on the paraprofessionals.”

“There’s nothing in it for them other than to weaken us,” she said.

The RCEA offers the paraprofessionals liability insurance, legal counsel in the event of a labor-related lawsuit, a designated representative during contract negotiations, continued advocacy from union organizers and access to bargaining training.

“For me, it’s more than negotiations,” Goodart said. "I need a voice on the other end of the phone.”

Frances Linn of the South Dakota Education Association said, "I think there’s a lot of work that needs to be done to repair bridges between the district and its employee groups.”

If the union is dissolved, the paraprofessionals would be represented by a “meet and confer” group, similar to how support services employees are represented now that their union is gone.

Under a “meet and confer" arrangement, according to Marsh, the district can either decide to bargain with whatever bargaining team the employees put together, or with individual employees, brokering different contract deals with each person. Or it can decide not to bargain at all.

Goodart and Montcrieff think this is the more likely outcome.

“Who are they going to sit down with?” Monctrieff said. “All 245 of us? Who’s going to get this organized?”

Bob Stevens has been a custodian in the district for 22 years. He was an active member of the support services union, which, rather than face an uphill Department of Labor election to decide its continued existence, opted to dissolve itself after the school board filed for decertification last year.

Stevens does not know the names of the members of the “meet and confer” group that represented him and other support services employees during contract negations last year, nor does he know if the group has regular meetings.

When the union was still around, Stevens said, there was one designated representative, whose name he knew, who had an attorney as a backup, and who was only a phone call away.

“It was nice to have that expertise,” Stevens said, adding that the union was like an insurance policy.

“You get insurance hoping you never need to use it, but if you need it, it’s there for you.”

The Department of Labor has not yet set a date for the election to decide whether the paraprofessionals will continue to have union representation. Until it does, Montcrieff, Goodart, Linn and others will be working to bolster their ranks.

“I think we tend to not toot our own horns,” Goodart said. “We are very worthwhile employees, and we have somehow gotten complacent. This needs to be our rallying call. We need to remember how it was 25 years ago.”

South Dakota Gov. Kristi Noem indicated Tuesday that she will try again to hold a fireworks display over Mount Rushmore to celebrate Independe…

UniServ Director Fran Linn leads a meeting of paraprofessionals with the Rapid City Education Association on Wednesday morning to discuss a recent move by the school board to decertify the paraprofessionals.