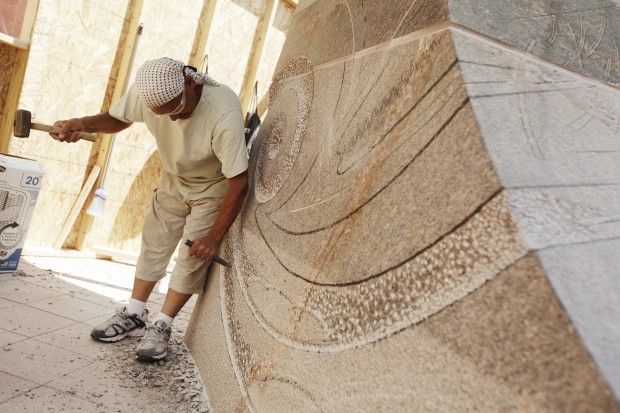 Masayuki Nagase works on part of a stone installation piece at Main Street Square. The piece is called The Passage of Wind and Water, which reflects the area's natural and cultural history. He will be carving throughout the summer, but won't complete the project for five years. 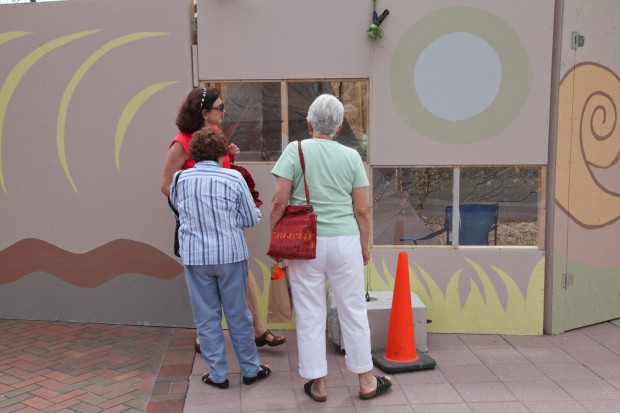 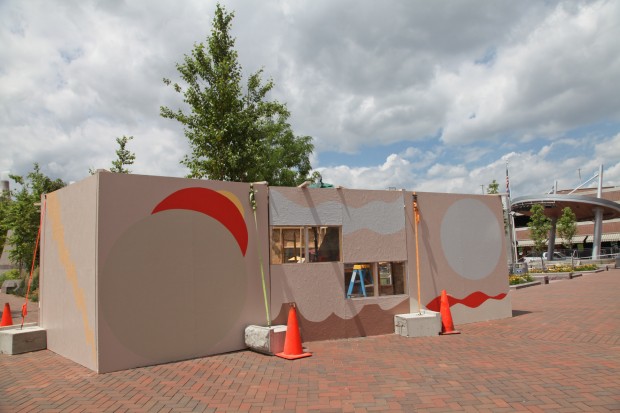 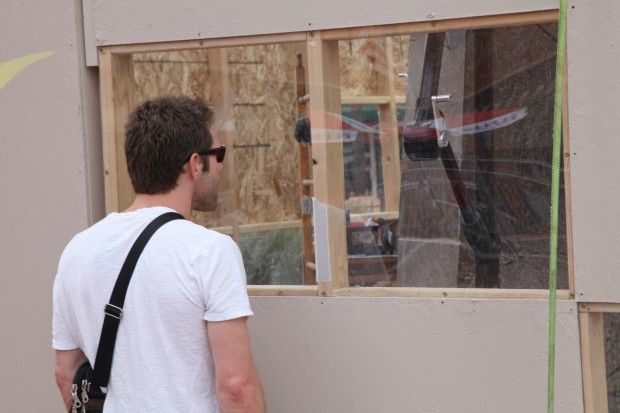 A man peers this past summer into the enclosed workspace of Masayuki Nagase, who recently finished his second year of working on the Main Street Square sculpture project.

The edge of Main Street Square has been taken over by something that looks like a giant cardboard box.

Looking through one of the windows cut into the structure you might see: hunks of stone, a blue folding ladder, a green umbrella and a wheelbarrow leaned against the wall next to some tool boxes.

This is Masayuki Nagase at work — he began Monday — and people will be able to watch him carving blocks of granite in the square most summer days for the next five years.

His project, "The Passage of Wind and Water," was chosen because of the "uncommon purity" and timeless beauty of Nagase's work. But right now, more banal words describe the project: labor, toil, hammer, chisel, sun, sweat.

"It's a beautiful day and there's a nice breeze and we've got him totally walled off," said Jeff Patterson, the 47-year-old owner of Cranky Jeff's Bicycle Shop, as he peered into the workspace Monday morning on his way to the bank. "I hope they have a way to get him some fresh air. We don't want to cook him."

The many-sided, many-windowed wooden enclosure — painted up by Rapid City high school students to be easier on the eyes — is a safety barrier to protect onlookers.

"Then the guy doesn't have to be bothered, but everyone can see what he's doing," said Phillips, as he walked through the square on patrol. "I think it's cool."

Nagase, in his 60s and originally from Kyoto, Japan, took on a stone-carving apprenticeship in the granite quarries of the Academy of Fine Arts in Tokyo. He's worked around the world as a sculptor and public artist. He's done other installations recently at Oregon's Portland State University, a greenway in Charlotte, N.C., and a community college in Washington. Nagasi and his family live in Berkeley, Calif.

The plan is for Nagase to finish carving the first five granite blocks before the autumn brings snow. It will take him five summers to finish all 21 pieces in the square.

Its theme, he has said, is "about optimism in the face of constant change."

The granite blocks sit on what was a just another asphalt parking lot as recently as three years ago, before it became Main Street Square, a public space now filled with children and tourists and tired shoppers and lollygaggers.

Debra Ruehlman, 58, remembers growing up when the old parking lot was bordered by a Sears department store. Ruehlman, who now lives in Cincinnati, peered through one of the workspace windows Monday afternoon with her family and saw "what looks like lizards" etched into one stone.

"Watching somebody work, too, brings it more home," she said, admiring the project and public art in general.

"You can just erect, for example, a bridge, utilitarian," she added. "Or you can make your bridge something special."

Go and watch sculptor Masayuki Nagase carve the first five granite blocks of "Passage of Wind and Water" at Main Street Square, located at the intersection of West Main Street and Sixth Street.

Nagase is scheduled to be there between 6 a.m., and 3 p.m., on Mondays, Tuesdays, Wednesdays and Fridays. If you'd like, stop by the door of his workspace to fill out a survey on your impressions of the Badlands and Black Hills for him.

Masayuki Nagase works on part of a stone installation piece at Main Street Square. The piece is called The Passage of Wind and Water, which reflects the area's natural and cultural history. He will be carving throughout the summer, but won't complete the project for five years.

A man peers this past summer into the enclosed workspace of Masayuki Nagase, who recently finished his second year of working on the Main Street Square sculpture project.