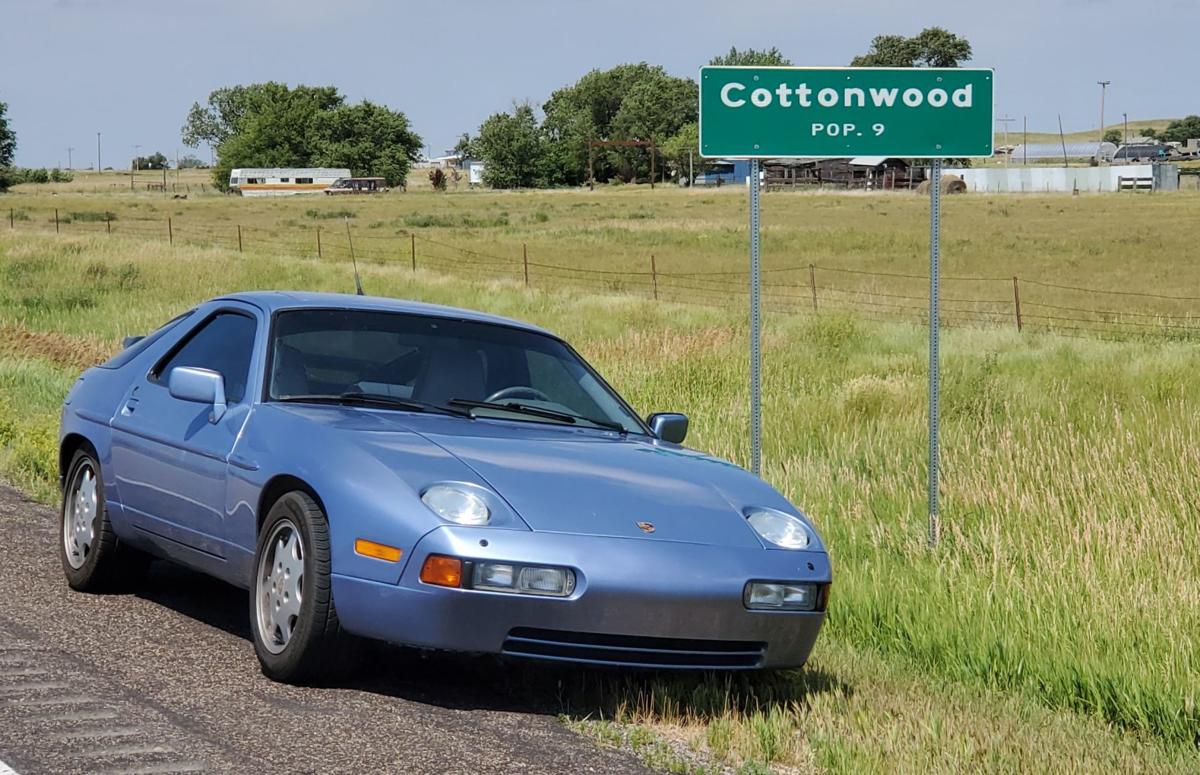 Harvey Carlisle of Cottonwood owns this rare Horizon Blue 1991 Porsche 928 and two others. He's organized Sharks of the Badlands, which will bring Porsche 928  owners from throughout the United States to the Black Hills. The Porsche 928s are dubbed sharks because of their speed and their tucked-in headlights and pointy nose that resembles a shark. 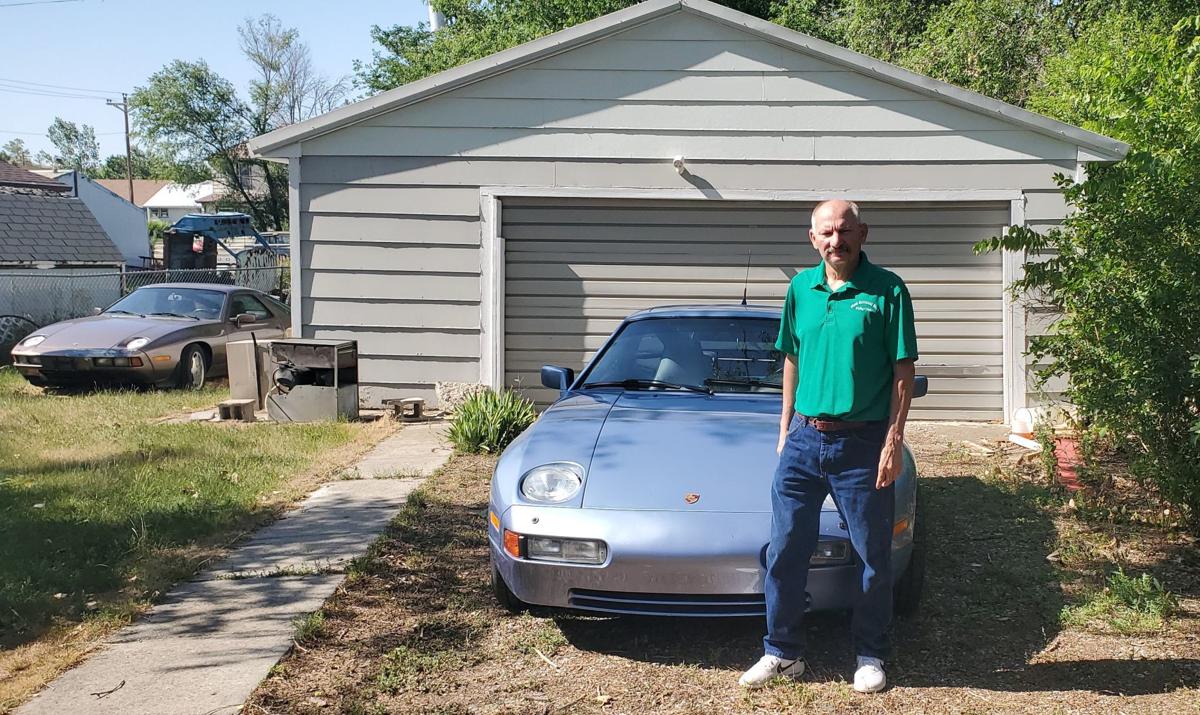 Harvey Carlisle of Cottonwood poses with his 1991 Porsche 928. Another of his three Porsches, a 1983 brown 928, is seen in the background. Carlisle has organized Sharks of the Badlands to bring dozens of Porsche 928 fans to the Black Hills.

The underdog of the Porsche world — the Porsche 928 — and people who love it will converge this weekend in Rapid City.

Sharks in the Badlands, a special event for the Porsche 928 Owners Club, is set for July 17-19. Organizer Harvey Carlisle anticipates up to 65 people from throughout the United States will drive their Porsche 928s to the Black Hills to tour the region.

“We want people to get out in these cars and drive them and enjoy them. They were meant to be luxury cars. … When Porsche 928 owners travel, they like to drive fast — for an hour or two,” Carlisle said, chuckling.

The Porsche 928s and their owners will be at the Cambria Hotel in Rapid City, where anyone who wants to see the cars and talk to owners is welcome to stop by on Friday evening.

“We stand around in the parking lot talking about cars and having fun,” Carlisle said.

“You don’t have to own a 928 to go to our events,” Carlisle said. “If you like them, then you’re welcome to show up. It’s a love for the cars and the desire to come get together and have fun.”

The Porsche 928 launched in Europe in 1980 and was introduced in the United States in 1983. The car was supposed to replace the popular Porsche 911, Carlisle said, noting that members of the 928 Car Owners Club own four of the original 11 prototypes of the 928.

However, the 928 was expensive when it was first produced and couldn’t compete with the popularity of the 911, Carlisle said. Porsche 928s stopped being manufactured in 1995. Only 61,056 of the Porsche 928s were made. Carlisle estimates about 12,000 still exist in the United States.

The Porsche 928’s claim to fame comes from the 1983 blockbuster “Risky Business,” when Tom Cruise, a gold Porsche 928 and a wooden pier abruptly plunge into Lake Michigan.

The car’s place in cinematic history is not the biggest attraction for its small but loyal group of fans. Nationally and internationally, the Porsche 928 Owners Club has about 280 members. They appreciate the Porsche 928 for its looks, its speed (up to about 175 miles per hour) and its affordability compared to other Porsches, Carlisle said.

“They're just a beautiful car. They were built 35 or 40 years ago and they’re still beautiful,” Carlisle said.

Carlisle bought his first Porsche while stationed in Germany with the Air Force. He toured a Porsche factory in Stuttgart and discovered a demonstrator vehicle that had been a factory executive’s car for a year fit his budget.

Carlisle now owns three Porsche 928s. Carlisle lives in Cottonwood and serves as its president because the town, with a population of nine, is too small to have a mayor.

“With three 928s, I have more 928s per capita than anybody in the world,” Carlisle said with a laugh.

His 1979 black Porsche 928 is the car he bought to tinker with. Carlisle said he has learned through online tutorials how to maintain and repair his Porsches, with the help of others in the Porsche 928 community.

He also owns a brown 1983 vehicle that’s one of the earliest surviving Porsche 928s manufactured that year, he said. His 1991 vehicle is one of only 387 Porsche 298s built for the United States that year, and as far as Carlisle knows, one of only two from that year of its color, Horizon Blue.

The Porsche 928 Owners Club typically puts on annual events in California, Texas, North Carolina and Virginia. Carlisle said Sharks of the Badlands is the second annual “Rendezvous,” a club event that will move to a different location every year. He’s looking forward to getting out on the road in the Black Hills with other 928 owners.

“We’re making (Rendezvous) so people can see different parts of the country they’ve never seen before,” Carlisle said. “I want them to come up and enjoy my neck of the woods and have fun.”

For more information about the club, go to P28oc.org.

Harvey Carlisle of Cottonwood owns this rare Horizon Blue 1991 Porsche 928 and two others. He's organized Sharks of the Badlands, which will bring Porsche 928  owners from throughout the United States to the Black Hills. The Porsche 928s are dubbed sharks because of their speed and their tucked-in headlights and pointy nose that resembles a shark.

Harvey Carlisle of Cottonwood poses with his 1991 Porsche 928. Another of his three Porsches, a 1983 brown 928, is seen in the background. Carlisle has organized Sharks of the Badlands to bring dozens of Porsche 928 fans to the Black Hills.