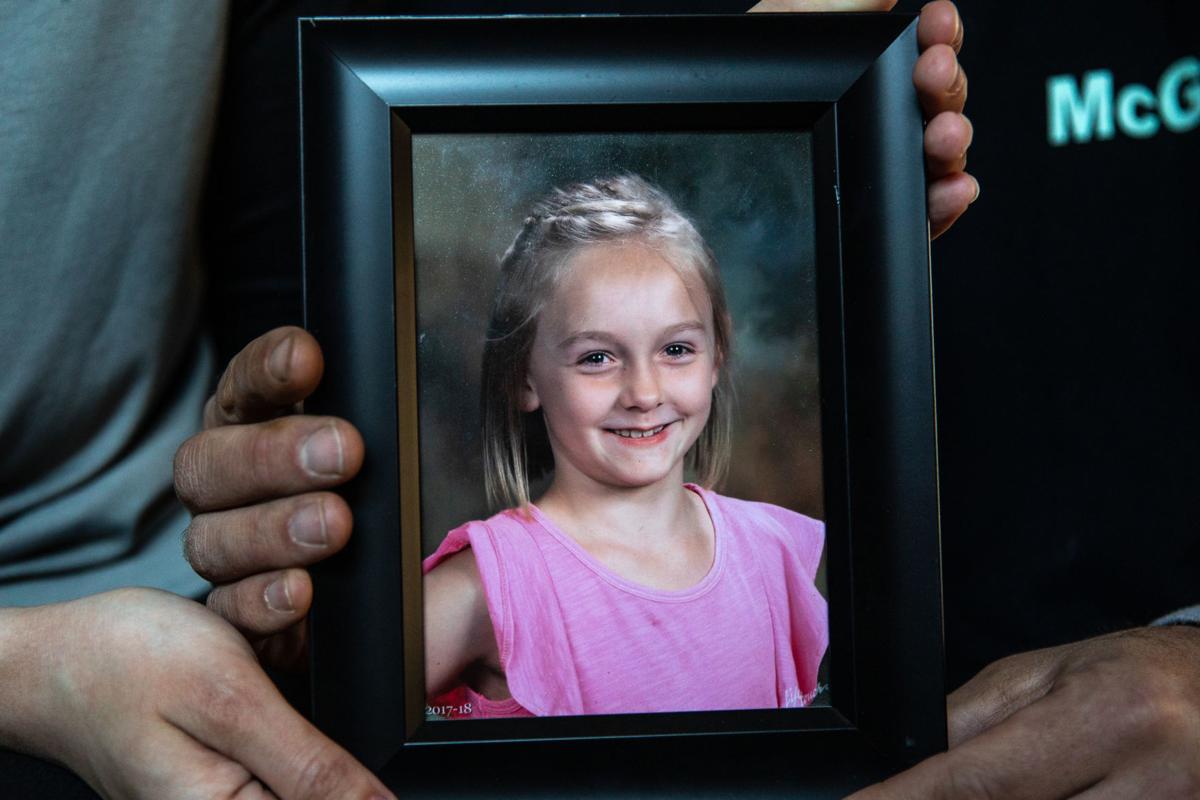 Kasandra and Chad Dennard hold a photo of their 9-year-old daughter, Serenity, who has not been seen since she ran away on Feb. 3 from Black Hills Children’s Home near Rockerville. 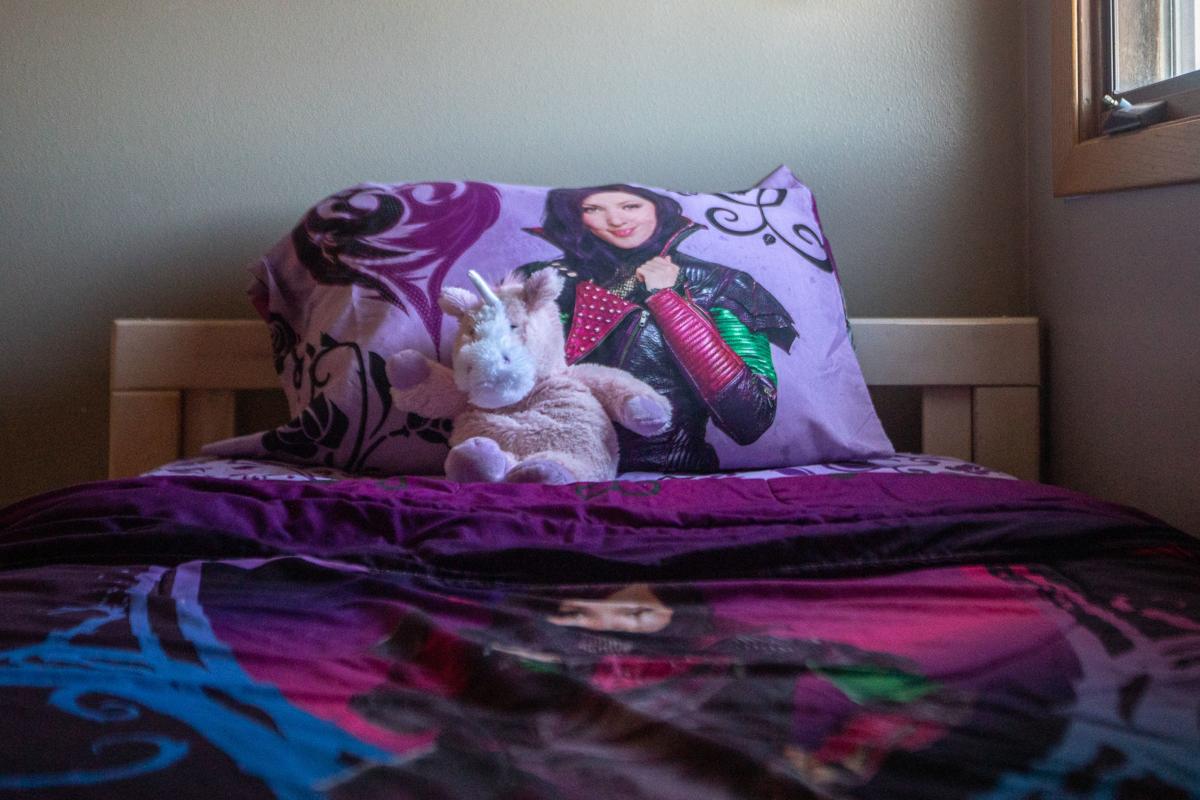 A stuffed pink unicorn sits on Serenity's bed at her family's home in Sturgis.

A stuffed pink unicorn with lilac hoofs sits on Serenity Dennard's neatly made bed with its arms open wide, waiting for the missing girl to return home.

Hanging above the unicorn, which was donated by school children after Serenity went missing, is a red and silver sign that reads "Serenity" in cursive letters. It was handmade by Serenity's great-grandfather, or "pop" as she calls him.

Across from her bed, covered in a comforter decorated with a character from the Disney "Descendants" movie, sits a white shelf with a dollhouse, toy car and colorful toy ponies.

Serenity's dresser is mostly empty since she packed her clothes when she moved last summer to the Black Hill's Children's Home, a residential youth treatment center.

"It sucks to look in there" and is difficult to walk by each day, said Chad Dennard as he stood last week inside his daughter's room at the family's home in Sturgis.

Serenity's room is a constant reminder for Chad, 37, and his wife Kasandra, 25, that Serenity has been missing for nearly two months after running away Feb. 3 from the Children's Home near Rockerville.

While the couple hasn't seen the 9-year-old in a long time, they can still lovingly recall her personality.

"Serenity is a very..., she's Serenity," Chad said with a laugh.

"I know, she's her own person," Kasandra chimed in as the couple sat at their kitchen table, surrounded by artwork made by their four children.

She's "very intelligent" and "thinks deeper into stuff than anyone I know," Kasandra said.

Their daughter enjoys hands-on activities such as playing catch with her older brother, wearing a special apron while cooking with her grandma, practicing gymnastics and making bracelets.

"She likes to be the center of attention, she likes all eyes on her," which makes it hard for her to make friends at school, Kasandra said. "She's charming. She can win your heart but at the same time she's going to tear it apart at some time, too."

RAD occurs when an infant or young child doesn't establish healthy attachments with their parents or their basic needs aren't being met, according to the Mayo Clinic, while DDMD results in children having "extreme irritability, anger and frequent, intense temper outbursts," according to the National Institute of Mental Health.

Serenity's symptoms include refusing to do school work, ripping things up and breaking toys, threatening self harm and yelling at people, Kasandra said. "She has no fear of introducing herself, asking others to play or talking to others," but later becomes controlling toward people.

Another one of her symptoms is running away, whether it's from her parents, grandmother, or school. She runs away because she doesn't know how to process her emotions, or because she begins to feel too comfortable in a place, Chad and Kasandra said.

Serenity has planned escapes by packing a suitcase and leaving in the middle of the night (her house has an alarm to help prevent that), convincing another child to run with her after one of two day-care supervisors temporarily left the room, and having a lunch lady pack her lunch in a bag so she could run away from school, the couple said.

Chad said he's "100 percent" positive that Serenity similarly planned an escape from the Children's Home by having another child first run away. "That's just her M.O." he said. "She's going to wait until everything is calmed down," said Chad. "It's unexpected," Kasandra added.

Serenity's parents said their daughter would hide from staff inside the Children's Home and threaten to run away. She once ran away while they were playing outside but staff was able to catch her. She may have ran Feb. 3 because she started to feel too comfortable at the home, was no longer the new girl and was ready for something new, the couple said.

Kasandra said she thinks her daughter's struggles stem from the inconstancy of being raised by many different people. She said Serenity's birth parents loved her but they were both sent to prison.

Once Serenity was removed from her family, "she was tossed through foster homes," about 12-13 homes in two years, Kasandra said. "She's used to wearing somebody out, and they send her to somebody else."

"She didn't get the chance to learn trust and dependency from her parents or caregivers," and it makes her feel like she can't trust people and is unloved," Kasandra explained.

Chad and his ex-wife adopted Serenity in October 2014, and the couple broke up in early 2015. Chad and Kasandra began raising her in May 2015.

"She is the strongest person I know in the world," Kasandra said. "She overcomes so much."

The couple took Serenity to outpatient therapy for at least two-and-a-half years before deciding in July 2018 to enroll her at the Children's Home, which provides schooling and intensive inpatient therapy.

"It was just to the point where it was ramping up, her behaviors were getting worse," Kasandra said. "It was kind of to the point where we couldn't any longer be up 24/7 watching her. I mean it was going to end in she was going to hurt herself or one of the other kids."
Kasandra said she hoped the Children's Home would help Serenity understand her trauma and how her mind works and learn coping mechanisms to deal with her emotions. Most children stay at the home for 14 months. Serenity was expected to be discharged September 2019 unless she needed less or more treatment based on her progress.
"She was there for a good reason," Kasandra said. "I mean you don't want to place your kid ever, but it was with good intentions."
Kasandra and Chad said their daughter was making progress until Christmastime, which is triggering to Serenity since she was taken from her birth family on Christmas day. She later resumed her progress.
"All the staff there is wonderful, they really are and they really care. Her therapist was great communicating with us and with her," Kasandra said.
The family saw Serenity four or five times a month, either for family therapy sessions or just to visit. Chad and Kasandra also took their daughter home during holidays. Serenity was allowed to call them twice a week, and she called each time she had the chance.
"We'd put it on speakerphone and the kids would talk to her," Chad said. "It was always about what did you have for breakfast, well what did you have for lunch."
Sunday was one of her days to call but it never came the Sunday she ran away, Kasandra said.

Since their daughter ran away nearly two months ago, Chad and Kasandra Dennard have tried to remain hopeful by focusing on efforts to find and…

The girl who has been missing since Sunday morning ran away from staff at a residential youth home near Rockerville, the organization’s execut…

Search for missing 9-year-old bumped up to Wednesday

The Pennington County Sheriff's Office will resume searching Wednesday for a girl who has been missing since she ran away Feb. 3 from a reside…

Dog teams will continue searching Saturday for a girl who has been missing for more than three months.

No-trespass notice issued against lawmaker after argument about missing girl

Kasandra and Chad Dennard hold a photo of their 9-year-old daughter, Serenity, who has not been seen since she ran away on Feb. 3 from Black Hills Children’s Home near Rockerville.

A stuffed pink unicorn sits on Serenity's bed at her family's home in Sturgis.