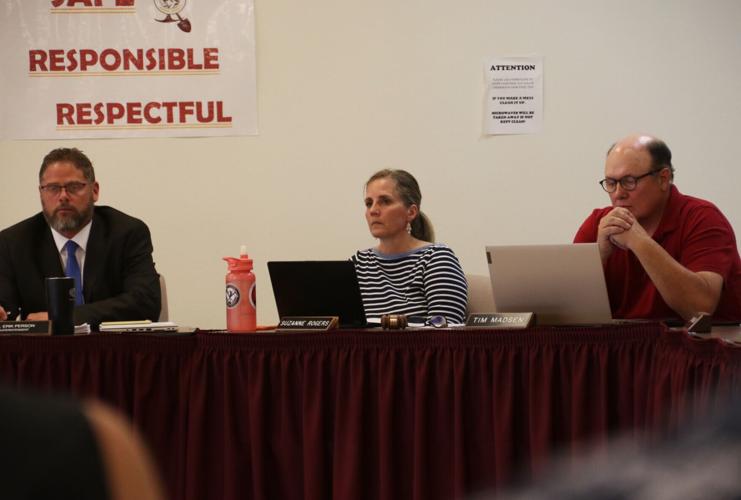 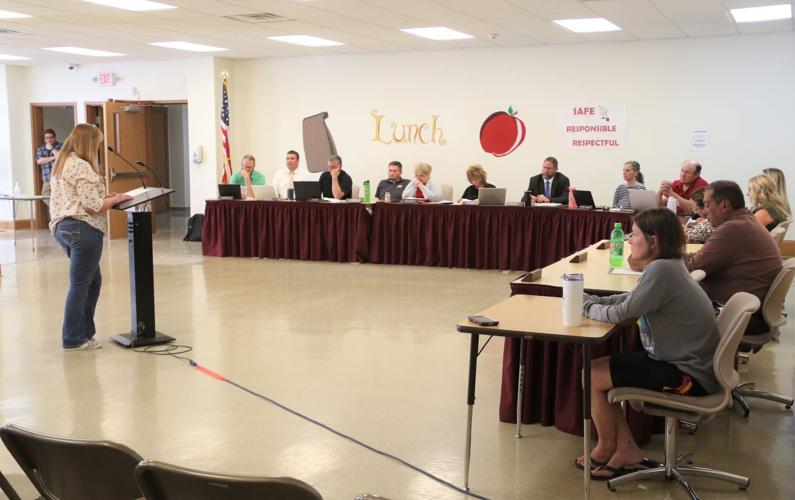 Members of the Lead-Deadwood School District Board of Education and administration staff listen to public comment Monday night in Lead. 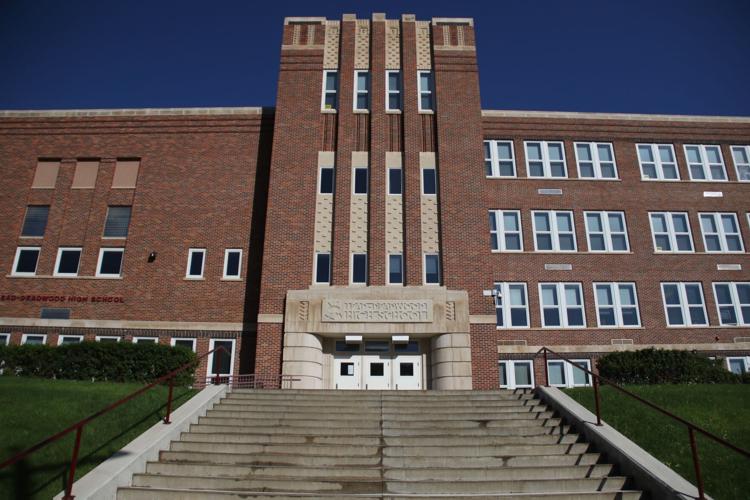 The Board of Education unanimously approved a revised policy on classroom displays and decorations Monday night. The policy limits materials and decorations on district property that could represent any "social agenda" or other controversial matter including political or religious messages.

Controversial materials can include endorsing candidates, platforms, positions, political parties or slogans; concepts, images, slogans or phrases that have appeared in the media and have been associated with controversy or a movement or a cause; and concepts, images, slogans or phrases that a reasonable person would deem offensive, obscene or inflammatory.

The revised policy allows school counselors to display signage in the office aligned with the American School Counselor Association standards and recommendations, but not in classrooms. The policy first came to the board in May after some educators took issue with safe space signs that had rainbow coloring.

The rainbow signs were showing support and respect for LGBTQ students, and indicated to students that the classrooms were non-judgmental places.

The safe place signs for LGBTQ students came under scrutiny by a fellow Lead-Deadwood teacher, who claimed the signs were indicative of "social drama" and "political propaganda" in schools.

Lead-Deadwood Superintendent Dr. Erik Person said the issue with the signs was "blown out of proportion." He said one of the bigger issues that came up throughout discussion on the policy is how First Amendment rights are being impacted in public schools.

Person said the policy aims to address where that line is. He said the courts have not ruled on this particular issue, but it has been established that teachers have First Amendment rights in their classrooms — but that there are reasonable limits.

"We tried to take the approach in absence of a policy on this particular issue to say, 'OK, the signs don't seem to be that big of a deal, but let's not have a problem, let's not have it grow from here,'" he said. "That wasn't adequate for some people."

Person said the policy will act as guidelines for materials and isn't meant to value or devalue groups of people.

"It is just to give us a tool to sort through this and figure out what is going to be allowed," he said. "Good policy has a set of guidelines rather than specifics because as soon as you start naming specific things, not only are you discriminating by viewpoint but you're also going to miss something."

Person said he heard throughout discussion on the policy from both sides, those for and those against, that classrooms need to be a safe space for all kids. He said he believes educators in the district are committed to that, but it's become evident that there's still work to do there.

"This is a good reminder that if we're going to say every classroom needs to be a safe space, then we need to mean it and we need to aggressively go after that whether we have a paper sign or not," he said.

In response to a public comment asking about Bible verses and scripture on teacher email signatures, Person said this policy would limit that use as well.

Board president Suzanne Rogers said she was disappointed the district got to the point of needing the policy because it was a simple sign with the intent to help a high-risk group of kids that became a controversy. She said she understands why it did, but wishes it didn't.

"Initially I thought we didn't need a policy because I know all of our staff has always had the best interest of all of our students in their heart, and they will do whatever they could for any student, but I fear we've opened Pandora's Box," Rogers said. "We cannot go back if we don't create a policy with some structure."

The revised policy also allows administration to consider whether the display of "controversial subject matter" will cause strong negative reactions from "reasonably minded persons" to determine if the materials should be removed.

According to the policy, the United States flag nor any other state flag in an unaltered form are considered controversial for the purposes of the policy. Materials, symbols or other things temporarily being displayed in the classroom or other instruction areas are exempt from the policy as long as it’s being used as part of a lesson based on the approved curriculum and content standards, and appropriate in school and for the grade level. The clause does not exempt employees or the district from any laws or policies prohibiting teaching divisive concepts.

Members of the Lead-Deadwood School District Board of Education and administration staff listen to public comment Monday night in Lead.