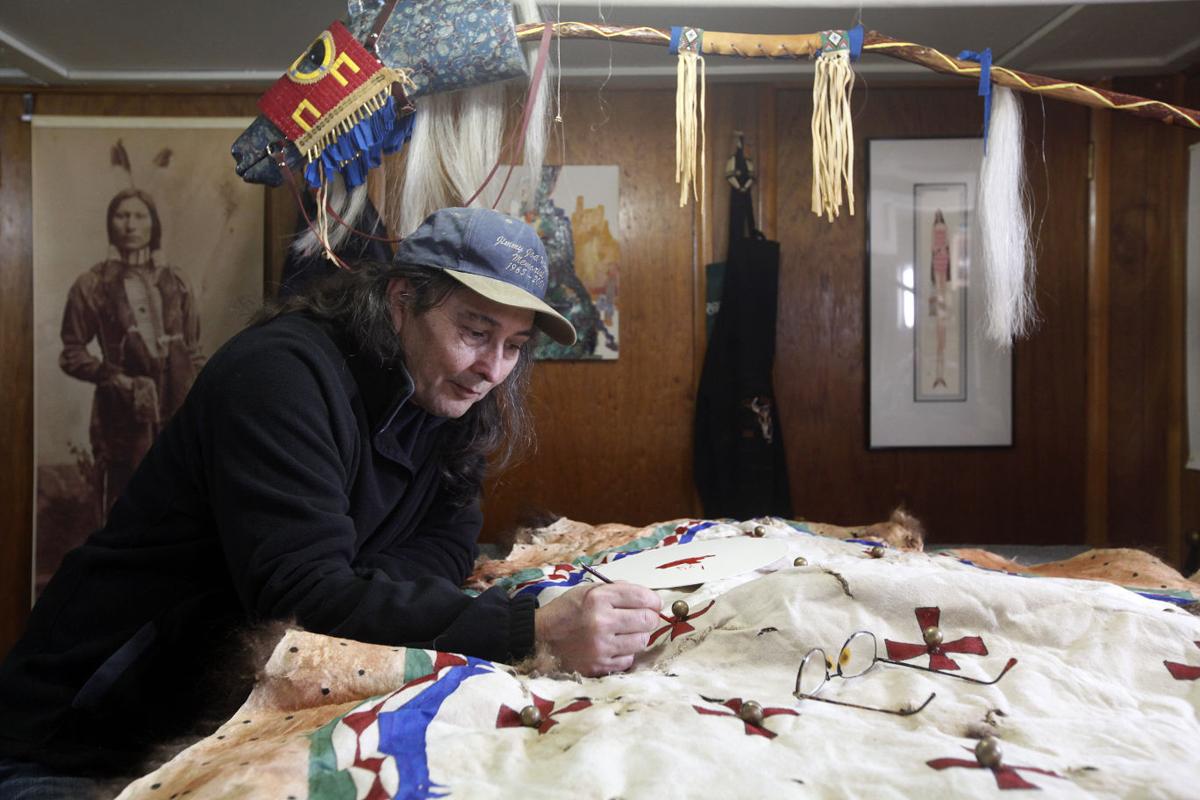 Dwayne Wilcox paints a buffalo hide Monday afternoon in his studio. Wilcox's artwork will be featured in the Smithsonian's National Museum of the American Indian in New York City. 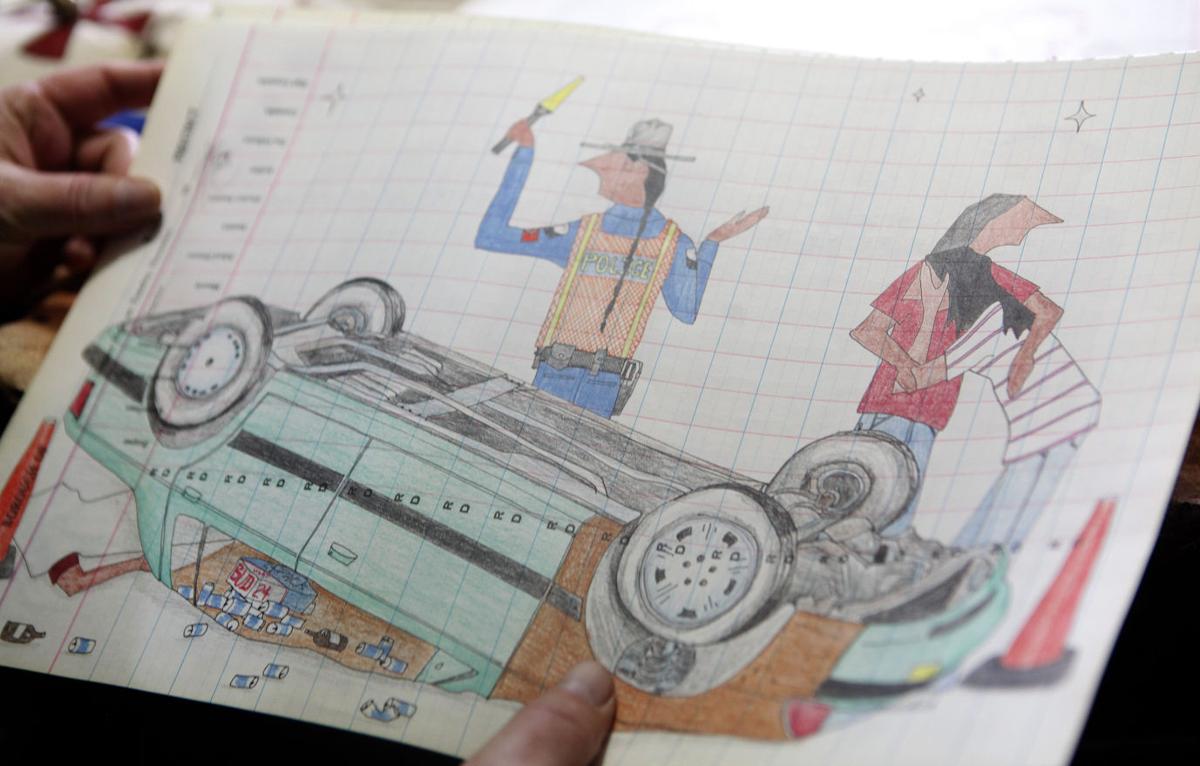 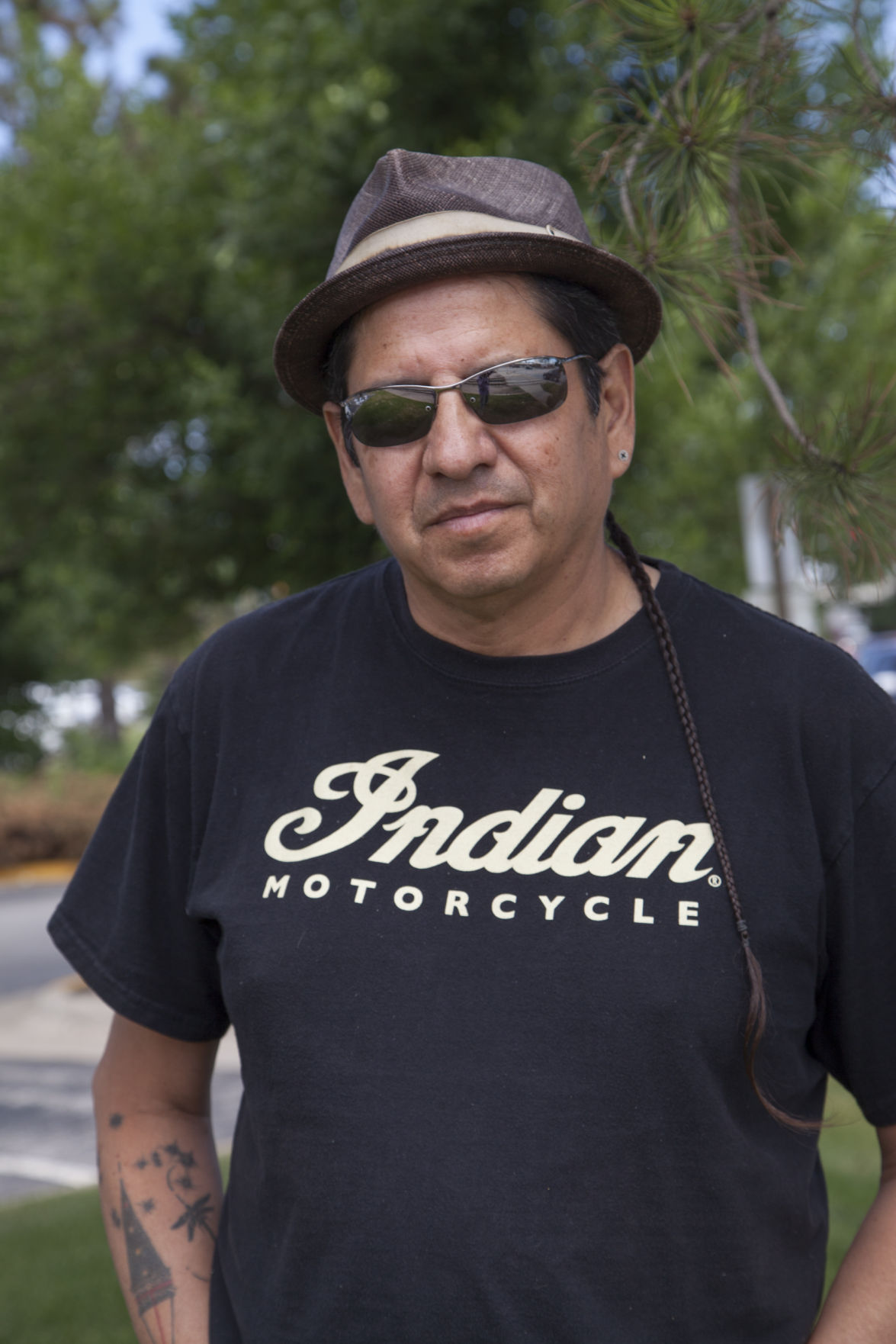 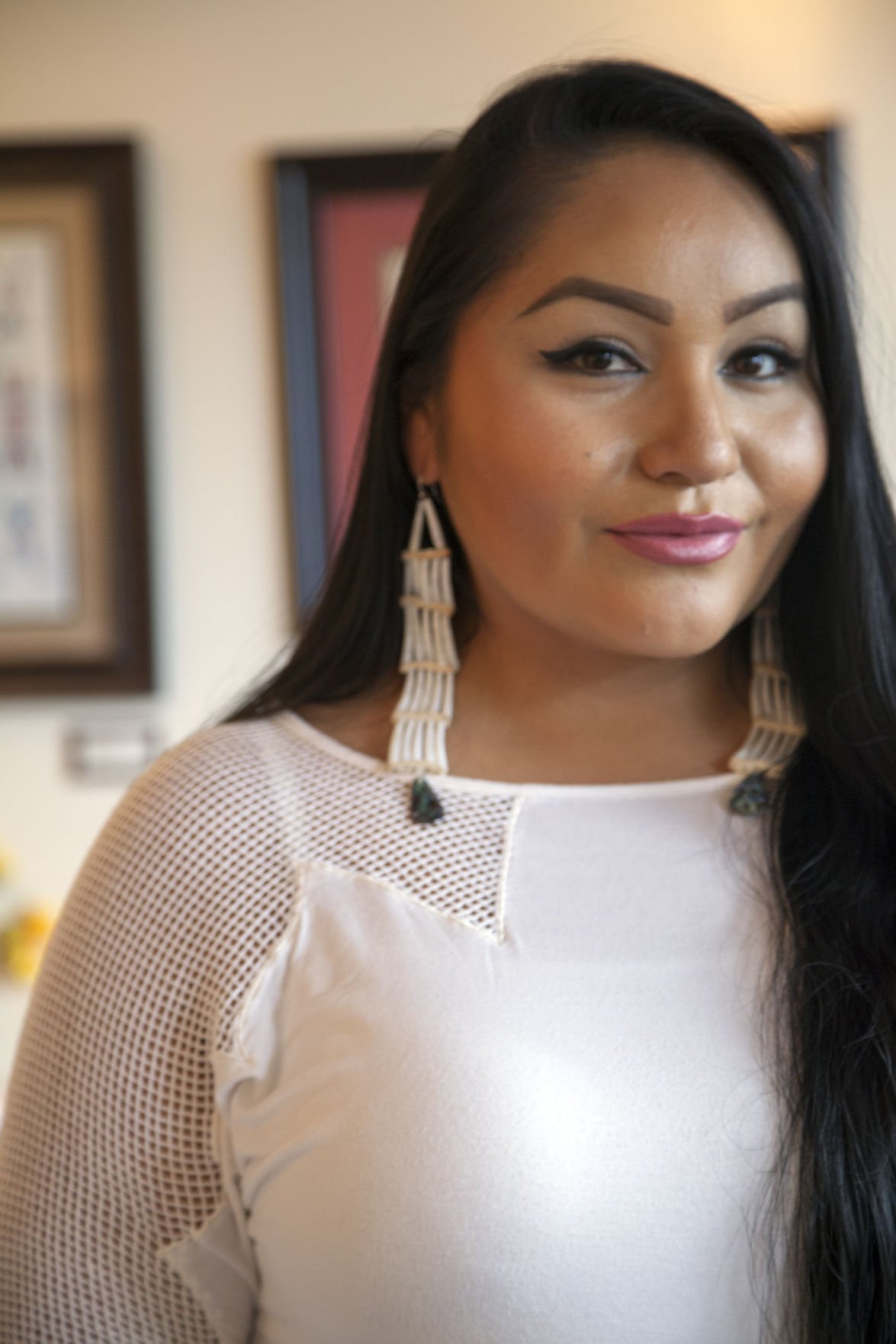 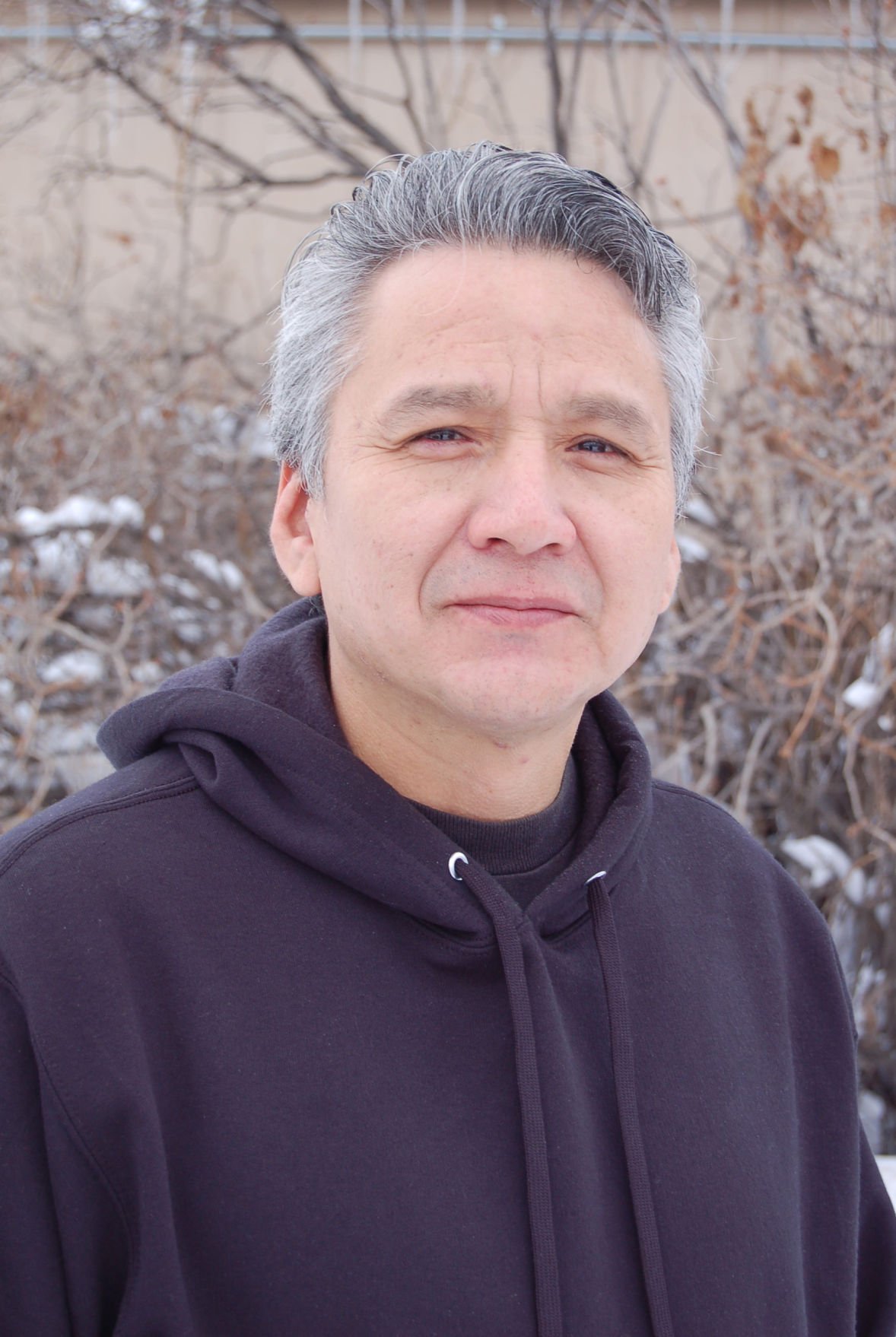 Martin E. Red Bear has dabbled in art since the 1970s, and part of what drives him is a yearning to leave something behind for future generations.

“Other people record history in writing, we do ours in pictures," Red Bear said. "I think that is just as important as a person who does it in writing."

The rich histories and traditions of narrative art among people in the Great Plains are the subject of a new national art exhibit. Five Rapid City area artists, including Red Bear, will have their artwork featured in the Smithsonian's National Museum of the American Indian in New York City.

The exhibit, “Unbound: Narrative Art of the Plains,” compares historical Native American artwork to contemporary productions today. It opens March 12 and will run through December.

“For any artist, this is where you want to be,” said Dwayne Wilcox, who has several of his ledger paintings in the exhibit. “It’s the pinnacle of what you want to be doing. It’s exciting and it’s neat.”

Other artists in the exhibit include Lauren Good Day Giago, Joel Pulliam and Jim Yellowhawk.

“All of these artists are top artists in their field,” said Emil Her Many Horses, the show’s curator.

Her Many Horses commissioned Native American artists across the country to tell the stories of their ancestors. The exhibit includes a variety of artwork, from ledger drawings to painted buffalo hides and clothing from the 1800s to today.

Her Many Horses said it was common for men to paint battle scenes, ceremonial events and other milestones on clothing or tents, recording their triumphs and the tribe’s history.

“It was telling their story,” Her Many Horses said. “A painted buffalo robe tells a person’s accomplishments similar to a soldiers uniform with badges.”

Her Many Horses has seen this historic practice maintained over the years, and revived by contemporary artists. It is where he came up with the idea to create “Unbound.”

Martin Red Bear had his acrylic painting, “Red Bear’s Winter Count,” commissioned for the Smithsonian show. The painting is a collage of 25 images from 1980 to 2004 depicting Native American history.

“It means a great deal. It’s a great honor for me to be chosen for something like this,” said Red Bear, who has taught art for more than 30 years. “My work is a continuum of events and things that were personal to me.”

Red Bear’s work is a reflection of how Native Americans recorded history through images. He said a tribe would record one important event a year.

“My painting is a calendar of the past,” he said. “We’re giving the public a history. Not just about who we are, but our culture and who we belong to,” Red Bear said. “They get to see anything that depicts our lives.”

Buffalo hide, clothing and teepees were the common canvases for Native Americans in the 1800s. The images were created with oils at the time. However, when European settlers began homesteading the Great Plains, they brought with them ledger books, offering Native Americans a new way to record their history.

Called ledger art, the drawings are pictograph images of love, battles and other events of daily life on the plains. Ink, watercolors and crayon are often used to create the ledger images.

“It’s something that evolves as you go through time,” Red Bear said. “Nevertheless we keep up the tradition of what things looked like back then. I use my culture and contemporary society and combine both of them to come up with my images. It makes for not only a pretty picture but provides information.”

Wilcox, who has five pieces of ledger artwork in the show, showcases daily life in his community.

One of his ledger artwork is called “Hand Games,” and it depicts what Wilcox said is the underground world of Native Americans and the stick games. Stick games is a gambling game where one person holds two sticks behind their back and a second person guesses which hand holds which stick.

“You ready people’s body language, and I think it’s funny looking at people’s behaviors,” Wilcox said. “This painting is one of our community having fun. I don’t focus on 1800 drawings. I make my work as contemporary as I can and portray modern people.”

Although Wilcox tries to inject some of his humorous personality into each drawing, he said not all of his drawings are humorous.

“I draw it all — the ugly stuff we do as people. I don’t try to make it mystical. I try to put the realities into my work,” he said.

Recording Native American history, like Wilcox and other artists in the “Unbound” exhibit have done, was commonly a man’s work, Her Many Horses said. However, in recent years, women have begun depicting their ancestry through this type of artwork.

One of those is Lauren Good Day Giago. She is the only female artist with multiple works in the Smithsonian exhibit. Her Many Horses said she had painted a dress that depicts her grandfather’s story in Vietnam.

“Through her work, we see these Native American traditions carried on,” he said.

A former resident of the STAR Academy in Custer has been accused of causing nearly $80,000 in damage after allegedly vandalizing buildings at …

Historically low interest rates, out-of-staters, limited inventory and higher construction prices for new homes have made for a frenzied housi…

Dwayne Wilcox paints a buffalo hide Monday afternoon in his studio. Wilcox's artwork will be featured in the Smithsonian's National Museum of the American Indian in New York City. 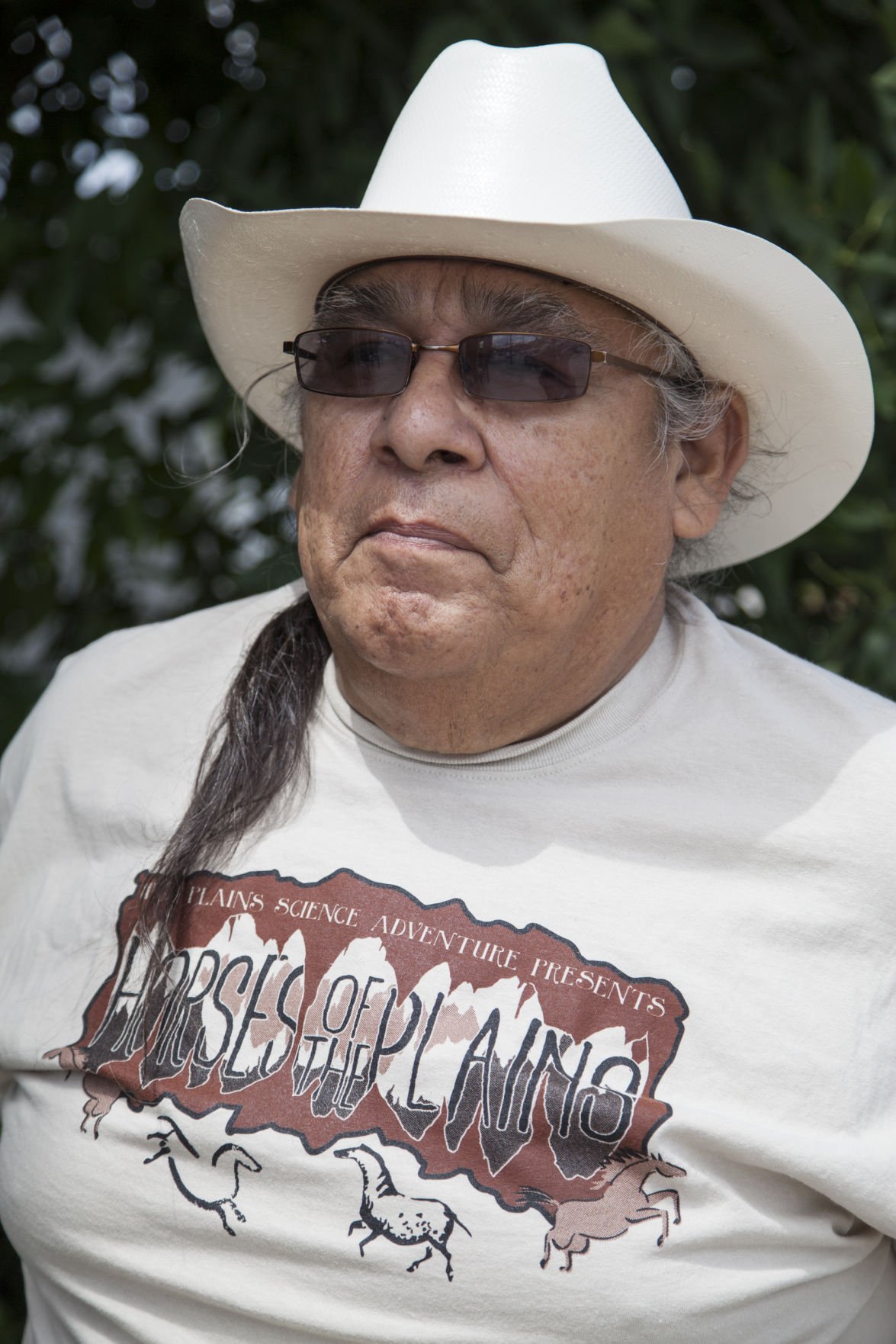