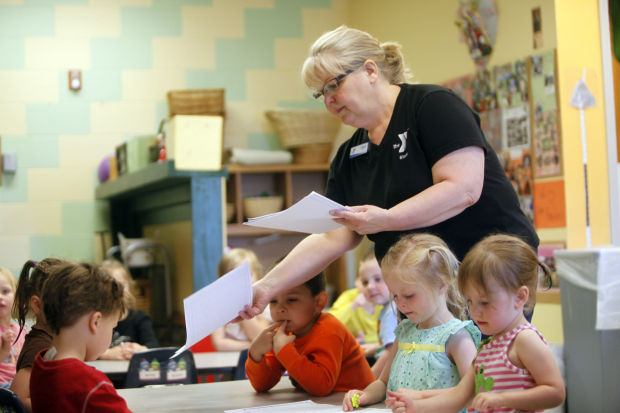 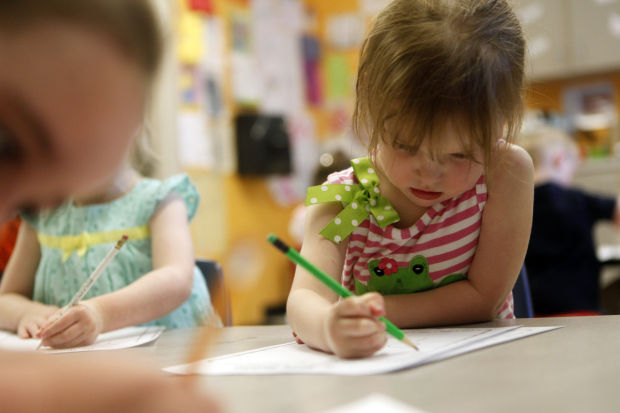 Katie, 3, traces shapes on a worksheet Friday morning during the Starting Strong class at the Rapid City YMCA. 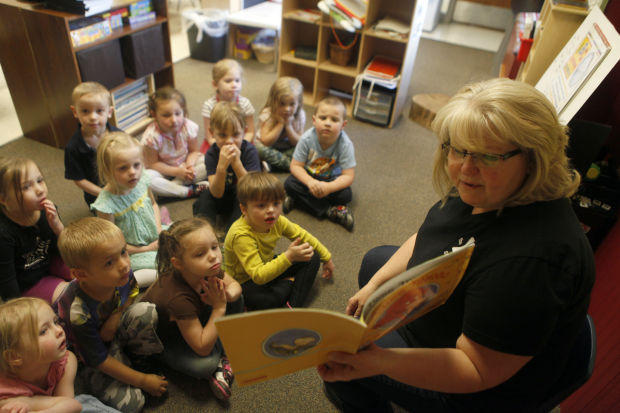 Rapid City YMCA teacher Carla Garner reads a story to her 3- and 4-year-old students Friday during the Starting Strong class. 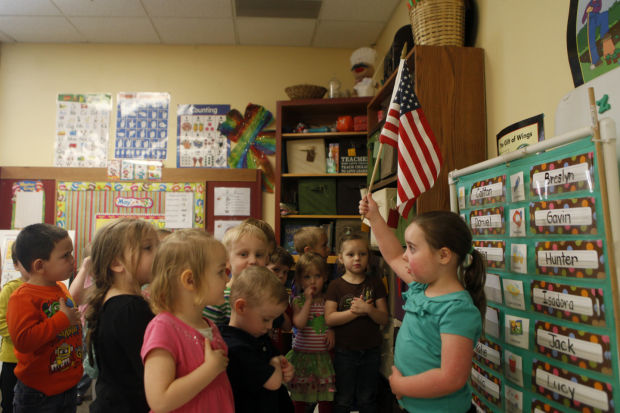 Mary Ann, 4, holds the flag while her fellow students recite the Pledge of Allegiance Friday during the Starting Strong class at the Rapid City YMCA. 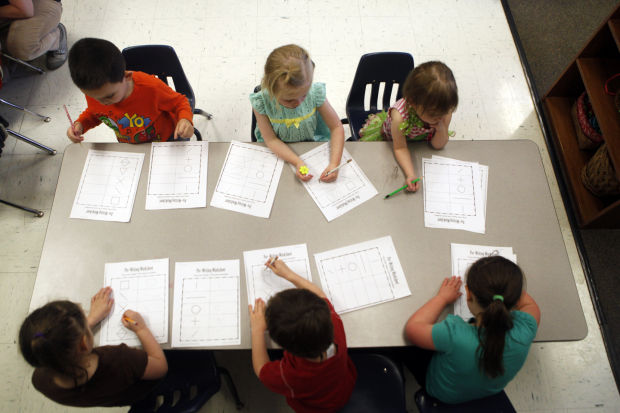 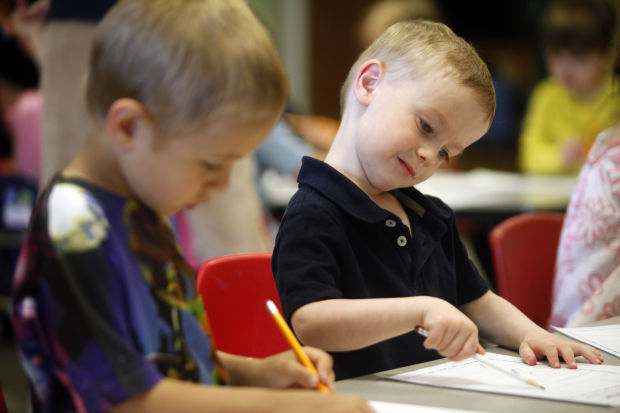 Four-year-old Gavin, right, and classmate Jack, 3, fill out a worksheet on shapes during the Rapid City YMCA Starting Strong Class. 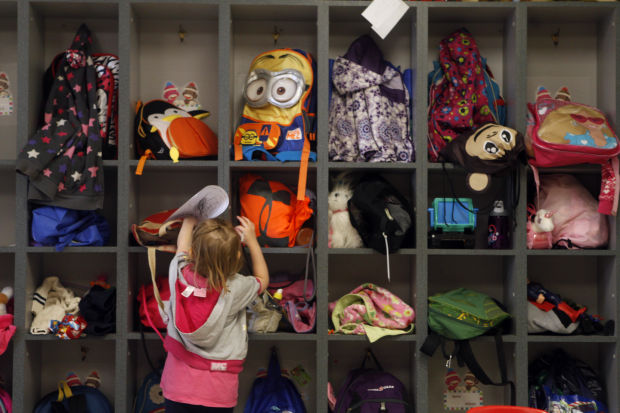 Isadora, 3, puts away a worksheet in her area during the Starting Strong class at Rapid City YMCA. 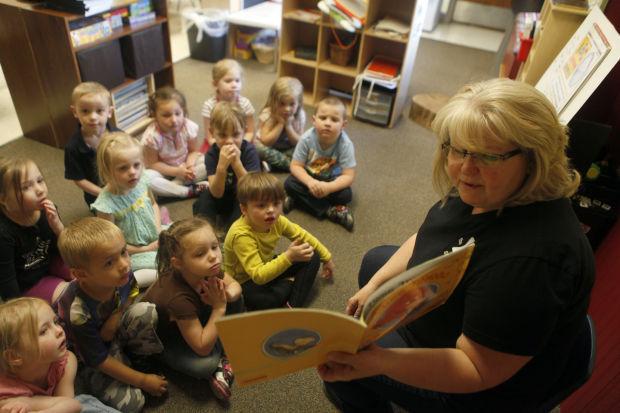 In this 2014 photo, Rapid City YMCA teacher Carla Garner reads a story to her 3- and 4-year-old students during their Starting Strong class. The program to help young children prepare for school is holding its annual banquet later this month.

"All of the children improved in language development across the board," according to Kim Booth, who coordinates the program through the organization Early Childhood Connections. "I think that's just from being in a program where people are speaking to them. They're just getting bombarded with language."

But the program, made possible by foundation and donation money, only covers 60 low-income children — 30 3-year-olds and 30 4-year-olds. That comes on top of the 450 or so children covered by the federal Head Start program.

And there aren't many resources out there for the children who can't get in.

In fact, South Dakota is one of only 10 states that does not have a state or federally funded pre-K program, which has been shown effective in preparing youngsters, especially those in poverty, to be ready to learn in kindergarten.

Despite studies showing early childhood education can save states money in the long run, is there political will in South Dakota to build another government program?

The idea is simple. By getting kids in group environments earlier in life and getting them started on basic learning — shapes, numbers, words — they wind up better adjusted.

In Starting Strong, children get about 450 hours of group learning, including exercises to work on counting and language. The program requires that Starting Strong teachers must have some kind of education training in early childhood education, and that there must be at least one staff member for every 10 children.

Starting Strong allows for families beneath 200 percent of federal poverty guidelines to apply. That means a family of four that brings in up to $46,100 per year can qualify.

This gives low- and middle-income families not eligible for Head Start, which covers up to 100 percent of the poverty line, a chance to get subsidies for early childhood education.

"And child care would be a lot more expensive than that, because then they'd be in there all day," she said.

Parents can get a different flavor of education depending on the Rapid City providers they choose. Two provide programs that are more religious-based, Booth said. Two others focus more on physical fitness and one emphasizes cognitive development, Booth said.

"If those kids move into the education system, they're going to start generating cost savings, not repeating grades, not needing as much special ed," Barnett said.

In addition, there are economic benefits of children being better adjusted and not getting in trouble with the law as they get older.

Barnett cites states like Oklahoma and West Virginia as models for how smaller, rural states can approach early childhood education.

The tricky part for legislators, according to Barnett, is that those cost savings for a program may not come until six or 10 years down the road. So setting up early childhood education can be an expensive proposition up front.

In West Virginia, legislators decided in 2002 that they wanted early childhood education. But being in a small, rural state with limited resources, lawmakers didn't want to overburden the state's administration or finances.

So the Legislature there passed a law that allowed the state 10 years to ramp up its programs, according to W. Clayton Burch, executive director for West Virginia's Department of Education's Office of Early Learning.

And as of last year, every 4-year-old in the state had a seat available in early childhood education, according to Burch.

The state tailored the program so local boards of education got together with local child care and Head Start programs and each designed their own programs.

Burch said that by pursuing a program through law, West Virginia has early childhood students counted in its education funding formula. That has offset declining enrollments in rural areas and saved the state money, according to Burch.

Studies have shown that children going through the program showed positive improvements in kindergarten, according to Burch.

Of the 10 states that don't have such programs, Barnett says several of those will come off that list soon.

"Mississippi already has a plan that will start this year. Hawaii has one under consideration," Barnett said. "Indiana has a study group that the chamber of commerce has actually sponsored. I see some movement in these states."

When it comes to investing in early childhood education, South Dakota's candidates for governor split along party lines: the Republicans against, the Democrats in favor.

Gov. Dennis Daugaard, who is running for re-election, said the state needs to focus on existing education programs. This year, the Legislature battled over whether to increase pay for South Dakota's teachers, who have the lowest salaries in the nation.

"The governor believes that if new funds are available, it is a higher priority to increase funding to current state programs, such as K-12 and higher education, than to create a new state program," wrote Tony Venhuizen, Daugaard's spokesman, in an email.

"What starts out as a 'I'm here from the government and I'm here to help ...' invariably ends up as onerous," Hubbel wrote in an email.

Joe Lowe and Susan Wismer, the two Democrat candidates facing off in the June primary, both said they supported finding a way to institute early childhood programs. Independent governor candidate Michael Myers didn't respond to an inquiry from the Journal by press time.

There also hasn't been much political will in the state Legislature for early childhood education.

In 2013, Rep. Jacqueline Sly, a retired teacher and Republican representing parts of Meade and Pennington counties, introduced a bill to fund a pre-k pilot program. The program would have given computers to families that could then use them for early childhood programs. If parents didn't complete their programs, according to Sly, the state could take the computers back.

But legislators killed the bill. Sly said resistance to it came in several forms: the cost to taxpayers, the perception that it threatened existing preschools and the idea among some who believe there should always be a parent at home to be with young children.

"But that isn't very realistic in South Dakota," she said.

Sly added that while she's still interested in getting an early childhood program in the state, the fight this year over K-12 education has taken precedence.

And it looks like it will continue. The Legislative Planning Committee, of which Sly is a member, has been tasked by Daugaard and top legislators to examine the teacher salary issue for next session.

Either way, Sly says, something to help get young children learning needs to be done.

"If children don't have those experiences at home at a very early age," she said. "They get left behind."

Ten states don't have any state-funded early childhood education programs, according to a recent report by the National Institute for Early Education Research, a program operated out of Rutgers University in New Jersey. The 10 states are:

The Rapid City YMCA is one of the places for children to take pre-k classes.

Katie, 3, traces shapes on a worksheet Friday morning during the Starting Strong class at the Rapid City YMCA.

Rapid City YMCA teacher Carla Garner reads a story to her 3- and 4-year-old students Friday during the Starting Strong class.

Mary Ann, 4, holds the flag while her fellow students recite the Pledge of Allegiance Friday during the Starting Strong class at the Rapid City YMCA.

Four-year-old Gavin, right, and classmate Jack, 3, fill out a worksheet on shapes during the Rapid City YMCA Starting Strong Class.

Isadora, 3, puts away a worksheet in her area during the Starting Strong class at Rapid City YMCA.

In this 2014 photo, Rapid City YMCA teacher Carla Garner reads a story to her 3- and 4-year-old students during their Starting Strong class. The program to help young children prepare for school is holding its annual banquet later this month.