Circuit Judge Christina Klinger ruled the measure approved by voters in November violated the state’s requirement that constitutional amendments deal with just one subject and would have created broad changes to state government.

“Amendment A is a revision as it has far-reaching effects on the basic nature of South Dakota’s governmental system,” she wrote in her ruling. 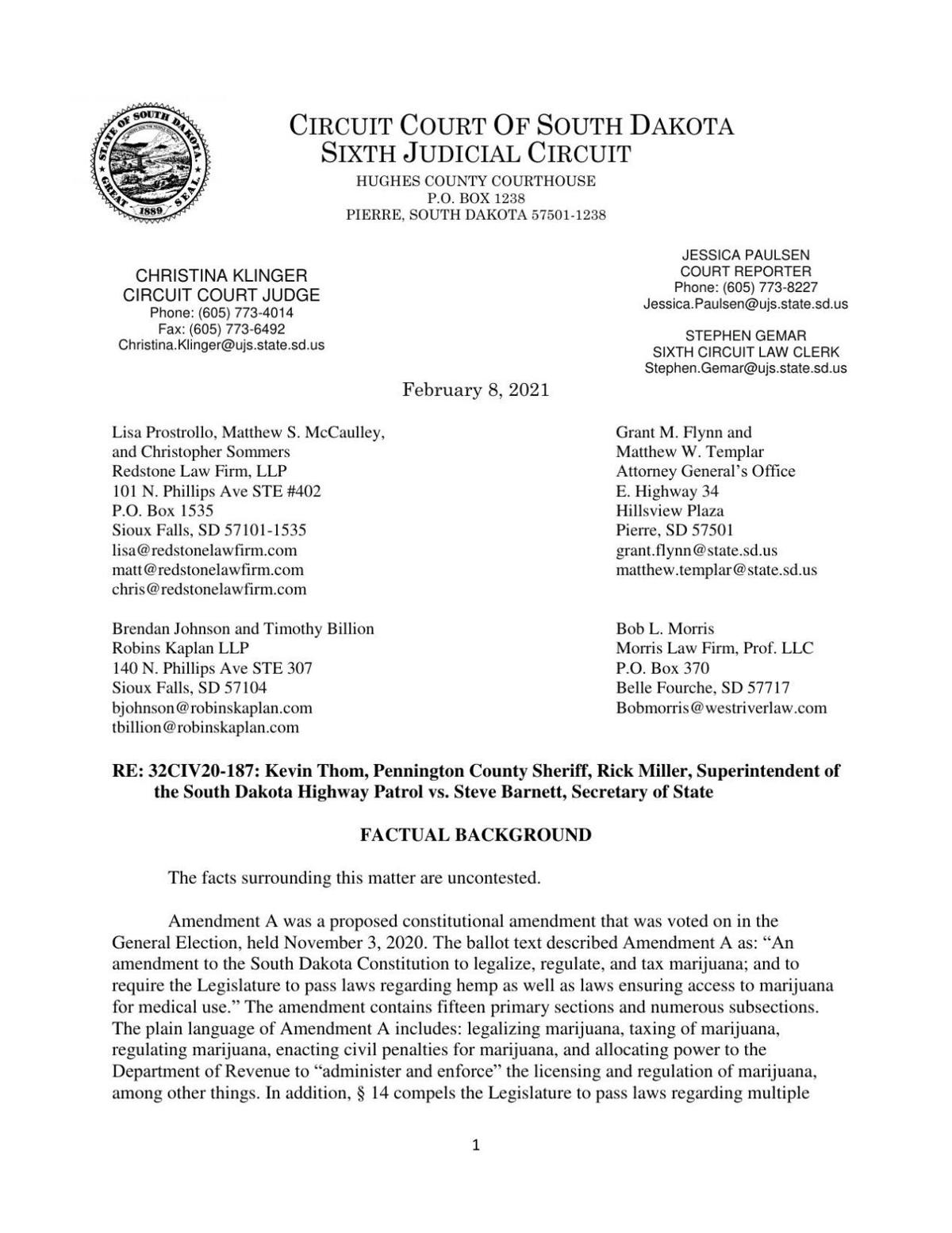 Brendan Johnson, who sponsored the amendment and represented a pro-marijuana group in court, said it was preparing an appeal to South Dakota’s Supreme Court.

Klinger was appointed as a circuit court judge by Noem in 2019.

“Today’s decision protects and safeguards our constitution,” Noem said in a statement. “I’m confident that South Dakota Supreme Court, if asked to weigh in as well, will come to the same conclusion.”

Thom also praised the ruling, saying it “solidifies the protections” of a 2018 constitutional amendment that required further amendments to stick to one subject.

In her ruling, Klinger said that marijuana legalization would have touched on business licensing, taxation and hemp cultivation. The amendment would have given the state’s Department of Revenue power to administer recreational marijuana, but Klinger ruled that by doing so, it overstepped the authority of the executive and legislative branches of government.

Lawyers defending legalization had cast the lawsuit as an effort to overturn the results of a fair election. About 54% of voters approved recreational marijuana in November.

Possessing small amounts of marijuana would have become legal on July 1, but that will not happen unless a higher court overturns the ruling.

Thom and Miller said in a statement they are pleased by the ruling of Klinger, who was appointed to the circuit court in Hughes County in 2019 by Gov. Noem.

“The judge’s ruling today solidifies the protections that were sought in the previous passing of Amendment Z.” Thom said. “It is an honor to defend our state constitution, and I appreciate the judge ruling in our favor today.”

“I am pleased with the court’s decision today, though I realize that the Supreme Court will likely have the opportunity to address our constitutional concerns on their merits,” Miller said.

Marijuana has become broadly accepted around the United States, with a Gallup Poll in November showing 68% of Americans favored legalization. South Dakota was among four states that month to approve recreational marijuana, along with New Jersey, Arizona and Montana. Fifteen states and the District of Columbia have done so. 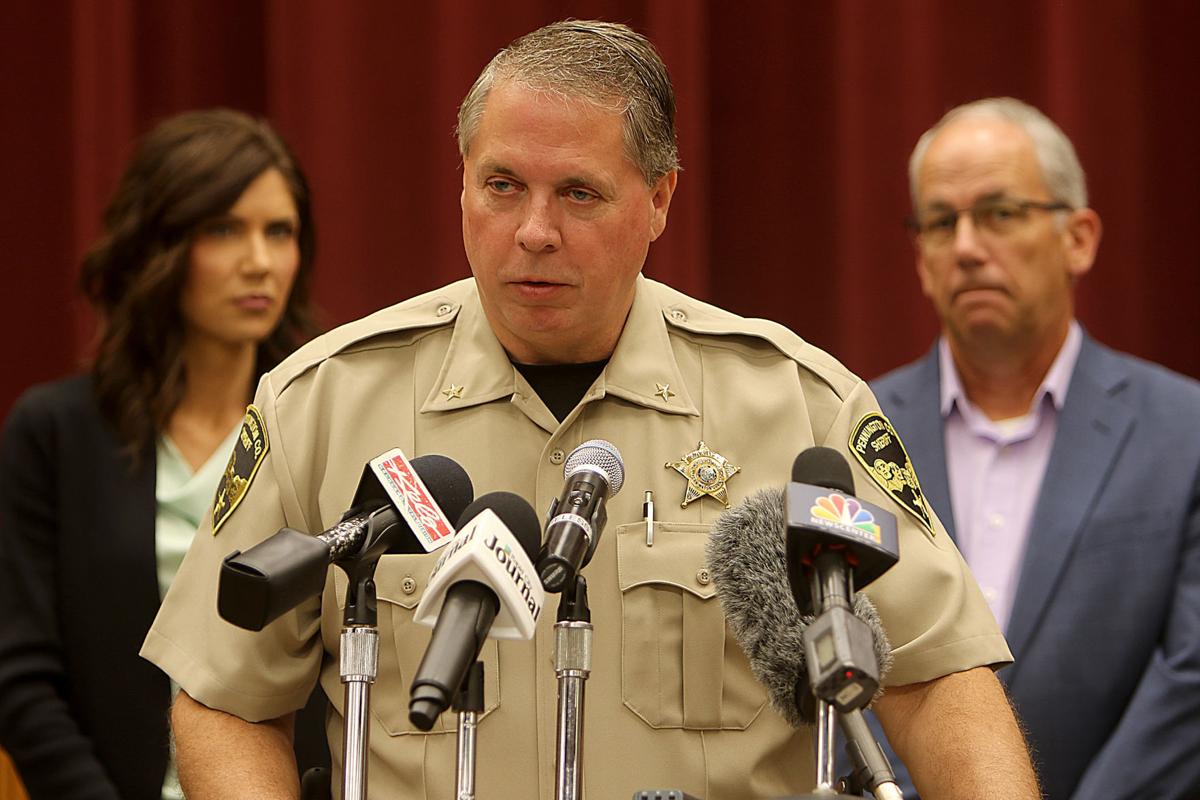 Pennington County Sheriff Kevin Thom addresses the media during a press conference in December 2020 in Rapid City. Gov. Kristi Noem along with Rapid City Mayor Steve Allender stand behind him. Thom is one of two state law enforcement officials who challenged Amendment A in court. 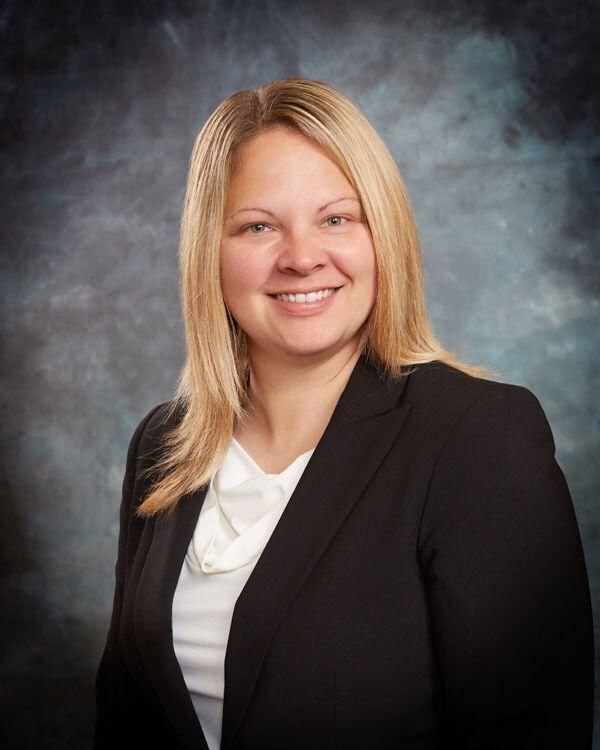