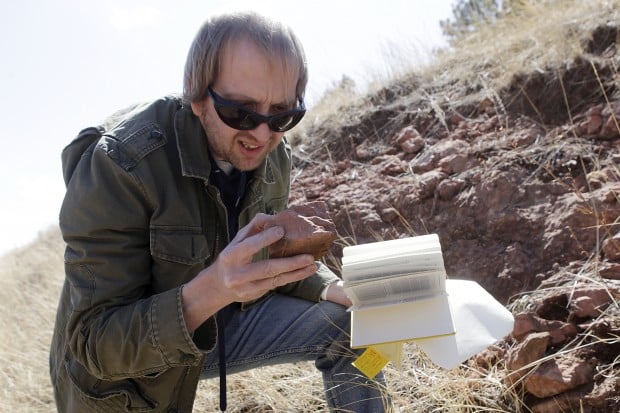 In this photo from 2013, Tom Marshall, a geologist with South Dakota Geological Survey, takes notes while gathering samples from the lower Minnelusa formation west of Hermosa for a study about sands that would be good for use in hydraulic fracturing. 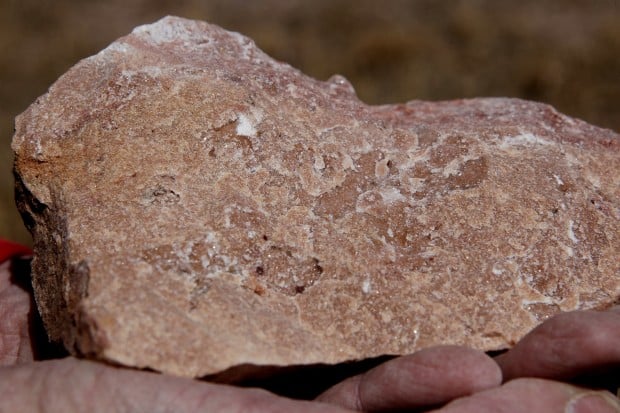 Geologist Tom Marshall shows a sample of sandstone that contains a lot of silica, or quartz.

PIERRE | A state study that took more than a year to complete has concluded that sand from western South Dakota is not suitable for use in the oil and gas industry — eliminating the opportunity for a new mining industry here.

South Dakota's Department of Environment and Natural Resources studied whether sand found mainly in the Black Hills was suitable for hydraulic fracturing. The method known as fracking involves pumping water, sand and chemicals underground to break up shale rock and allow oil to flow.

Fracking is used extensively in the booming western North Dakota oil fields, and officials wanted to know whether western South Dakota might benefit. The 16-month study found that the sand did not meet specifications recommended by the American Petroleum Institute.

For several months last year, scientists for the South Dakota Geological Survey traveled around the area examining sand outcroppings, including near Hermosa, Fairburn and Hot Springs. Some had hoped the sand would be suitable for use in oil recovery and may have developed a new industry for Western South Dakota.

Still, some environmentalists opposed the drilling for fracking sand here, arguing that while it may not be as intrusive as gold mining, for example, it carried it own environmental risks.

Suitability is serious business when it comes to the finding the correct sand. It must be tough enough when injected in hydraulic fracturing to hold open underground seams, but porous enough to allow oil or gas to flow through and be recovered. Now, it seems, West River sand will not work to those standards.

"DENR undertook this study at the request of the 2012 Legislative Oil and Gas Summer Study Committee that was looking for ways to benefit from the North Dakota oil boom," Department Secretary Steve Pirner said in a statement Thursday. "While the study did not produce the desired results, DENR's geologists gained a better understanding of sand resources in western South Dakota and that may prove useful in the future."

In this photo from 2013, Tom Marshall, a geologist with South Dakota Geological Survey, takes notes while gathering samples from the lower Minnelusa formation west of Hermosa for a study about sands that would be good for use in hydraulic fracturing.

Geologist Tom Marshall shows a sample of sandstone that contains a lot of silica, or quartz.