The record-breaking $31.8 million sale on Tuesday night of one of the world's most complete Tyrannosaurus rex fossils sent shock waves through the paleontological world, raising new questions over who the anonymous buyer was and why the remains were sold.

While the identity of who bought Stan, the nickname of the T. rex fossil, remains a mystery, South Dakota court records show Stan was the victim of a bitter battle between two brothers who founded the Black Hills Institute of Geological Research in Hill City.

The story of Stan's demise reflects a business fight between brothers Pete and Neal Larson, other family members and a minority shareholder in the institute — complete with allegations of sexual impropriety, shady business dealings, unprofessional behavior and an unceremonious dismissal of Neal Larson from both the institute's employment and his seat on the board of directors.

The Journal obtained court records dating back to 2016 and spoke Thursday to Neal Larson's attorney, John Nooney of Rapid City. Neal Larson was the plaintiff in the matter and was later awarded Stan as part of the settlement with Black Hills Institute.

The Journal attempted to contact defendants Pete Larson and the Black Hills Institute, but was unsuccessful in receiving comment. The Journal received contact information for defense attorney Jeffrey Hurd late Thursday, but was unable to contact him.

He stood guard over the Black Hills Institute of Geological Research's museum in Hill City for nearly a quarter of a century and roamed the northwest portion of South Dakota more than 65 million years ago.

The T. rex fossil known as Stan was discovered by his namesake, amateur paleontologist Stan Sacrison, in 1987 while he was exploring the Hell Creek Formation near Buffalo in Harding County. Black Hills Institute's website said they began excavation of the fossils in 1992.

His display was dismantled and the fossilized remains were transferred to the care of Christie's New York, the world's leading auction house. Nooney said the original hope was for Stan to go up for auction in late 2019, but Christie's wanted to reconstruct Stan's display, a time-consuming and costly effort.

Stan weighed somewhere between seven and eight tons and had eyes the size of baseballs, the Associated Press reported.

“He is 37 feet long and one of the fiercest killing machines that has ever roamed the earth,” said James Hyslop, head of the auction house’s science and natural history department.

It is one of the largest, most complete fossils on record, particularly Stan's skull, which was a separate display for a close-up examination of the beast.

Stan's auction at Christie's was then delayed because of the COVID-19 pandemic.

"Then COVID came, of course, which halted everything for a while," Nooney said. "In September (2020), Christie's announced it was going to be sold as part of the modern art auction on Oct. 6, and so for the hammer price of $27.5 million, the final price was $31.875 million — that's the story of Stan."

The Associated Press reports Stan will remain on display until Oct. 21 when he will then be transferred to his anonymous new owner.

In 1981, Honert left the Black Hills Institute and sold his shares to the Larson brothers. After the split, Pete Larson had 66 2/3 percent of the institute's shares and Neal Larson held 33 1/3 percent. In 1990, the institute's board of directors brought on another partner, Robert Farrar — bringing Pete Larson's share to 65%, Neal Larson's to 35% and Farrar's share to 5%.

Court records indicate Neal Larson's 35% share and subsequent 2012 dismissal from the institute's board of directors without severance or redemption of the shares as the root cause of Stan's sale at Tuesday's auction.

According to the 7th Judicial Circuit Court's findings of fact and conclusions of law in 2016, Neal Larson was "squeezed-out," "frozen-out" and "oppressed" when he was fired from the institute and its board of directors in July 2012. 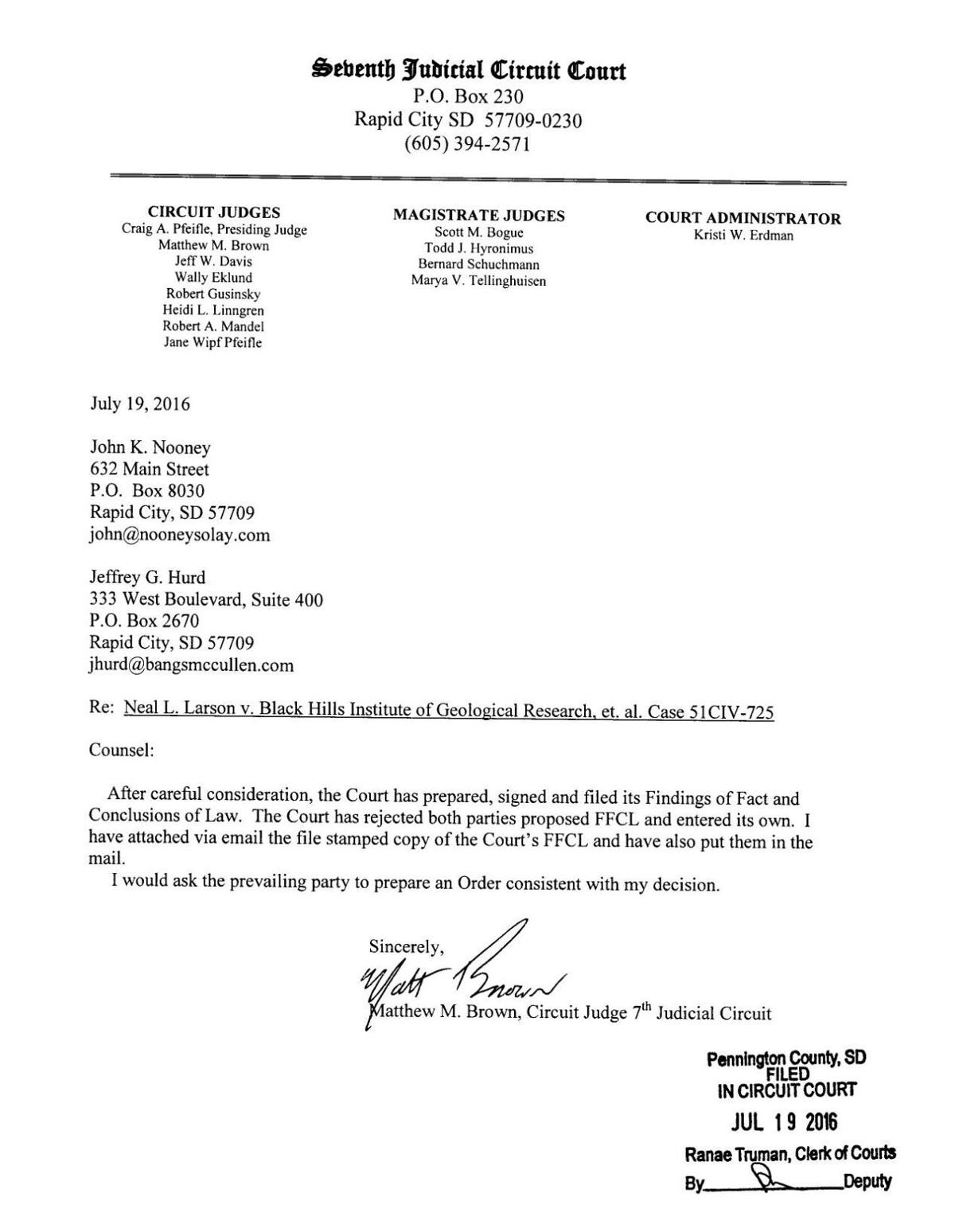 Court records show trouble began brewing at the institute in 2008. Neal called his brother Pete "Jekyl and Hyde" in an email correspondence with a museum client, and Neal was actively looking for ways to spend more time as a director and officer of the Black Hills Museum of Natural History.

Court records show Neal was actively preparing and trying to sell a fossil specimen "Dueling Dinosaurs" and attempted to give the exclusive rights to the museum in 2011. In an email correspondence, Neal suggested they "not talk to Pete" about their intentions.

The deal was scrubbed after an attorney for the museum determined there was a conflict of interest.

In July 2012, court records show Neal allowed a former employee accused of sexual misconduct to return to the institute's property.

By this time, the institute's board of directors had increased to five members with the additions of Pete Larson's son and Farrar's son.

Court records show Neal responded to the email "if anyone escorts (the former employee) off the property it will be the last thing they ever do." Several heated email exchanges ensued after that.

On July 23, 2012, Pete Larson placed Neal on a 30-day suspension without pay. Following the suspension, court records show Neal attempted to return to work on Aug. 23, 2012, and was called into a meeting where he was notified he was suspended without pay for an indefinite time.

After that last suspension, Neal sent several emails to his brother Pete and other members of the board about the suspension and future actions. On Sept. 10, 2012, court records show Neal requested an official board meeting to discuss the institute's assets.

The court found that despite Neal's request, "he was never afforded an opportunity meet with the Board of Directors before he was permanently terminated and removed" on Sept. 26, 2012.

The board met without Neal present and terminated him without discussion or distribution of Neal's 35% stake in the institute, court records show.

Neal filed a lawsuit in 2015, and the court found he was not awarded his "equitable claim" in a 2016 judgement.

Nooney said the case lingered in litigation until 2018, when the courts awarded the asset of Stan to Neal Larson as his equitable claim.

"For a lot of tax reasons as much as anything, (Stan) was never transferred to him because as part of the case that was resolved, his shares were going to be redeemed at the institute in exchange for the dinosaur," Nooney said. "But we couldn't do that until they were prepared to sell it."

Nooney said the decision was made where the institute would be the consignor to Christie's, where it would be sold at auction.

"This happened in 2012, and they basically kicked Neal out of the company without his due claim to his shares," Nooney said. "If they would have followed the law, this would have never happened."

Nooney would not disclose how much Neal received from the sale.