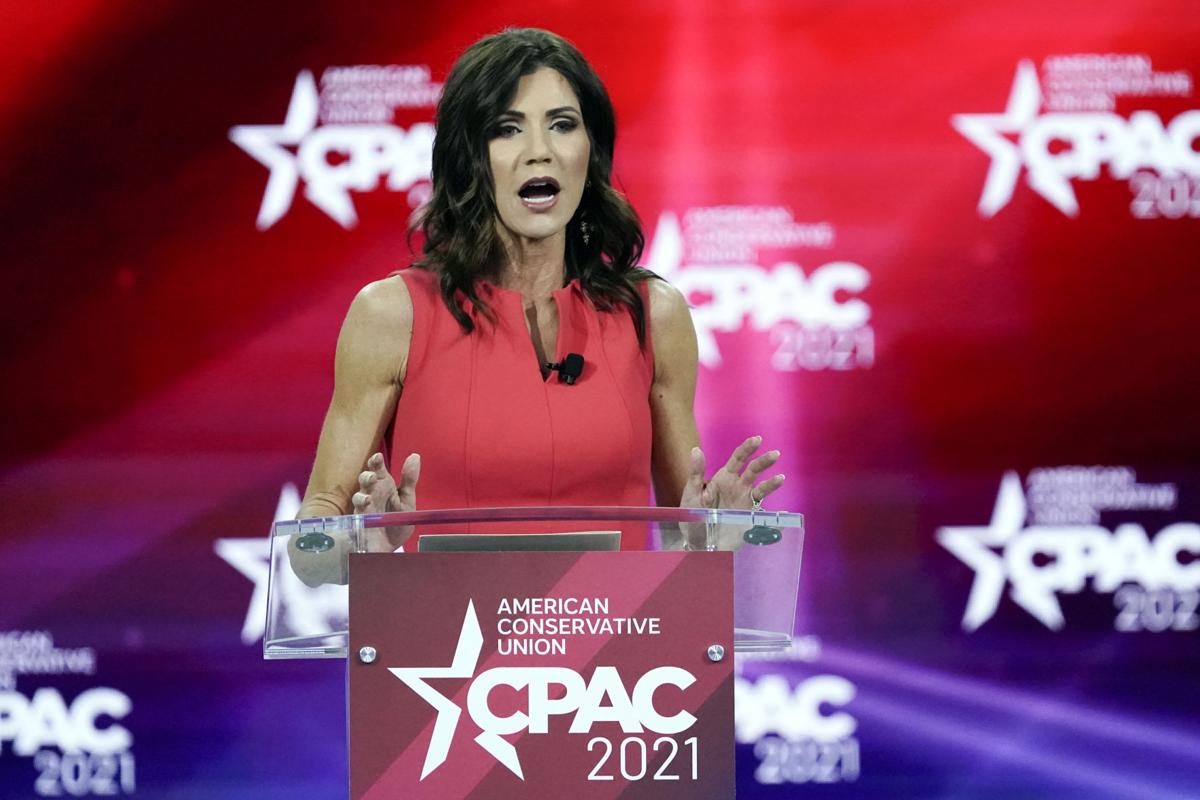 Just days after a state agency moved to deny her daughter's application to become a certified real estate appraiser, Gov. Kristi Noem summoned to her office the employee who ran the agency, the woman's direct supervisor and the state labor secretary.

Kassidy Peters, then 26, ultimately obtained the certification in November 2020, four months after the meeting at her mother's office. A week after that, the labor secretary called the state agency head, Sherry Bren, to demand her retirement, according to an age discrimination complaint Bren filed against the department. Bren, 70, ultimately left her job in March after the state paid her $200,000 to withdraw the complaint.

Exactly what transpired at the July 27, 2020, meeting in the governor's office isn’t clear. Noem declined an interview request and her office declined to answer detailed questions about the meeting.

“The Associated Press is disparaging the governor’s daughter in order to attack the governor politically — no wonder Americans’ trust in the media is at an all-time low," spokesman Ian Fury said.

Still, government ethics experts who reviewed the series of events at the AP's request said Noem’s decision to include her daughter in the meeting created a conflict of interest regardless of what was discussed.

While Peters was applying for the certification, Noem should have recused herself from discussions on the agency, especially any that would apply to her daughter’s application, said Richard Painter, a professor at the University of Minnesota Law School who was the chief ethics lawyer for former President George W. Bush.

“It’s clearly a conflict of interest and an abuse of power for the benefit of a family member,” he said.

Peters began working as a state-registered appraiser — an entry-level job — in 2016. She worked under the supervision of a certified appraiser to get the experience necessary to apply for her own residential appraiser certification. It's not an easy hurdle; applicants must show they can perform appraisals to national standards, putting to use 200 hours of classroom education and months of experience.

While trainees make as little as $10 an hour, certified residential appraisers can launch their own businesses and make more than $50,000 a year.

In September 2019, the governor's daughter applied to become a Certified Residential appraiser. But in late July 2020, the Appraiser Certification Program moved to deny the license, according to a July 27 letter from Peters’ supervisor that was obtained by AP. The certification is denied when an applicant’s work samples don’t meet minimum compliance with national standards, according to the agency's upgrade procedures.

Bren, who had directed the Appraiser Certification Program for three decades, told the AP that she received a text on July 26 from her supervisor telling her to be at the governor’s office the next morning, ready to discuss “appraiser certification procedures.”

Besides Noem and Peters, Bren said the meeting included Labor Secretary Marcia Hultman, Bren’s supervisor, the governor’s general counsel, and, participating by telephone, Noem’s chief of staff and a lawyer from the state’s Department of Labor and Regulation.

Bren remembered it lasting close to an hour and including questions from Noem on how certification works.

After consulting with her attorney, Bren declined to discuss with AP further meeting details, including whether Peters’ upgrade was discussed. The settlement of her age discrimination complaint includes a clause barring her from disparaging state officials.

However, Bren did confirm that at the meeting she was presented with a letter from Peters’ supervisor, Kristine Juelfs, who wrote that she disagreed with the denial and charged that Peters had run up against an “inefficient process.”

“In the past week I was notified that my trainee, State Registered Appraiser Kassidy Peters, was denied upgrade of her license to State Certified Residential Appraiser," Juelfs wrote. “This came as quite a shock to myself as she has represented the knowledge and skills necessary.”

Juelfs' letter blasted the application evaluation for lacking “timeliness and professionalism” and said the examiner reviewing Peters’ work had “acted unprofessional when conversing with Kassidy.”

Peters agreed with the criticism in a statement to AP.

“My upgrade to become a Certified Residential Appraiser was very lengthy, and I was expected to navigate through many obstacles from the very beginning,” she said. “I’m glad I have it now and that I have the privilege to serve my clients in South Dakota.”

Bren declined to discuss the certification of any individual appraisers, including Peters. However, speaking broadly about the agency, she said she hoped to help applicants succeed while making sure they met federal requirements.

“You also want to be fair and consistent and treat all your appraisers the same,” she said.

Labor Secretary Hultman, in response to questions from the AP, declined to delve into details of Peters’ application or explain the discrepancy between Juelfs’ letter, which said the upgrade had been denied, and department records, which showed a denial was not ultimately issued.

“Kassidy Peters went through the same process as other appraisers. There was no denial,” Hultman said in a statement. “Mrs. Peters completed the requirements to become licensed, and she was subsequently certified in November.”

Bren's troubles began to mount almost immediately after Peters' Nov. 25 certification. One day earlier, Hultman had called Bren to discuss “concerns about the Appraiser Certification Program,” according to Bren's age discrimination complaint. On Dec. 1, the complaint alleged, Hultman called Bren to demand her retirement, saying she had shown an “inability to change gears.”

Hultman told Bren that the phone call was to be kept a secret from her direct supervisor to make it appear Bren’s retirement was her choice, the complaint alleged.

Over the ensuing weeks, Hultman did not yield in demanding a retirement date, even after Bren asked if there was any way to keep her job, emails obtained by the AP show.

Bren filed her age discrimination complaint at the end of December and three months later received the $200,000 settlement agreement to withdraw the complaint and leave her job. When asked about Bren, Hultman declined to discuss “the specifics of personnel decisions.”

Mark Miller, the governor’s current general counsel, said in a statement, “Neither party admitted fault, and no agency affirmed her claim. This sideshow regarding Kassidy Peters speaks for itself.”

Fury, the governor’s spokesman, cast the episode as an example of how Noem “won't allow bureaucratic red tape to get in the way of South Dakota’s sustained economic growth.”

“Having more quality appraisers in the market will help keep our housing market moving and home prices down,” he said.

A few days before signing the agreement, Bren sent an email to industry colleagues expressing worry about the future of the program.

“I have been forced to retire by the Secretary of the Department of Labor and Regulation at the behest of the Administration,” she wrote, then added, “I want each of you to know that I have sincerely done everything possible to avoid this unfortunate circumstance.”