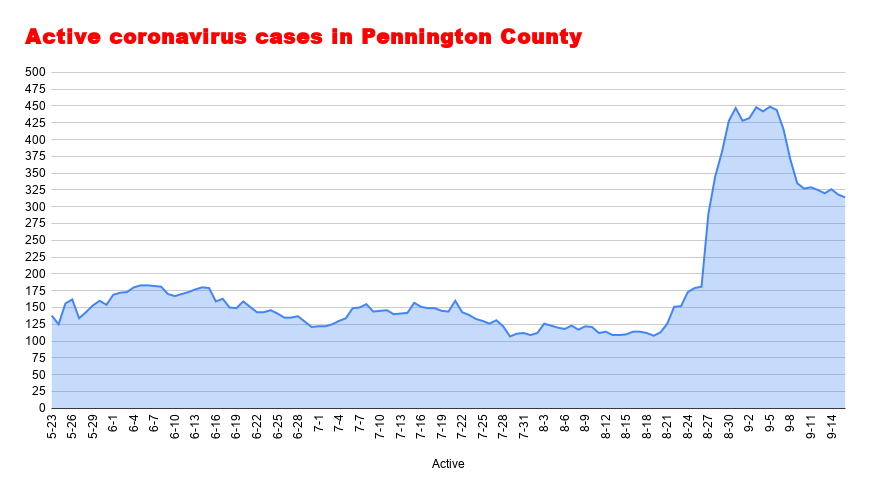 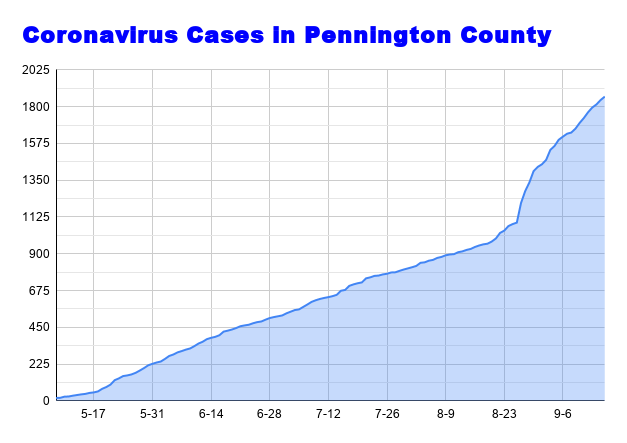 Eight South Dakotans from seven counties are the most recent victims of COVID-19, bringing the state's total to 192, according to the Department of Health.

The three women and five men were from Pennington, Fall River, Lake, Clay, Bon Homme, Yankton and  Minnehaha counties. Minnehaha County reported two deaths Wednesday. The ages of those who died included two people in their 40s, one in their 70s, and five over 80.

In Pennington County, 34 people have now died from COVID-19, according to the state. Minnehaha County has the most reported deaths with 76. The death in Fall River County was its second.

One day after fewer than 1,000 tests were completed, the state reported on 3,559 tests on Wednesday. There were 297 new cases for a positivity rate of 8.3%. Active cases in South Dakota rose by 56 to 2,442. The number of people being treated for COVID-19 related illnesses in hospitals across the state increased to 139 — up six since Tuesday and 71 since last Tuesday. Twenty of those are in the Monument Health system.

Pennington County has been seeing low testing results for several days, but Wednesday's report made up for the lack of results in previous reports. Pennington County reported 21 new infections on a total of 772 tests. The county has had 1,862 total infections with 314 of those listed as active.

South Dakota missed a third daily record in a row by only five new cases Friday, according to the daily report from the Department of Health.

The Department of Health (DOH) reported 173 new cases of COVID-19 across the state on Monday, including 20 new cases in Pennington County.

South Dakota continues to shatter records as the pandemic continues to affect the state. According to the daily report by the Department of He…

State health officials announced Wednesday that an individual who attended a women’s conference held at Faith Family Church at 127 N. Spring A…

The number of people hospitalized with COVID-19 illnesses in South Dakota is at record levels. There are now 178 people being treated in hospi…

New parking lot to be constructed at Stratobowl access road

The South Dakota Department of Transportation (DOT) will begin construction of a new parking lot at the Stratobowl access road on Sept. 28, th…