George Floyd's uncle lived in Rapid City for 20 years before moving to Gettysburg in central South Dakota three years ago and becoming a business owner in the town of 1,200.

Now, he wants to see his community remove the Confederate flag that is part of the police department's logo.

Selwyn Jones said Tuesday that he has friends who are police officers in Gettysburg and that the logo is something he’s “sure will change now with all the things going on in the world.”

“I’m a crusader for change,” said Jones, a hotel owner who recently attended a peaceful walk in Rapid City commemorating his nephew's life. “I’ll see if we can figure out a way to make a change in that. It will change.”

Gettysburg, which is in Potter County, is also across the Missouri River from the Cheyenne River Sioux Tribe.

Lynn Hart, a black man and Native American, said he’s offended to see the Confederate flag on the police department’s logo in Gettysburg.

“If they really want to be sincere about history, they should (use) the white flag” in the logo, said Hart, noting that the Confederacy fought for slavery under the command of General Robert E. Lee until it surrendered in 1865 to the Union in a war that cost 600,000 Americans their lives.

“To me, this is not going to help South Dakota’s image,” Hart said. “To me, it’s a symbol of racism and bigotry. They’re sending the wrong message if you’re a person of color. I’m not mad at anybody, I just don’t understand.”

Protests have erupted nationwide in the wake of George Floyd’s death in the custody of Minneapolis police. As part of the demonstrations, protesters in other states have torn down Confederate memorials and statues while counter-protesters in Rapid City have patrolled the streets with Confederate flags flapping from their trucks.

A desire to remove Confederate statues and retiring the flag also came after a white nationalist rally in Charlottesville, Va., turned violent Aug. 12, 2017, when a car plowed into a group of counter-protesters, killing one woman.

Removal of the statues and of Confederate flags stems from the belief that the monuments glorify white supremacy and memorialize a government whose founding principle was to continue the enslavement of people of color.

The U.S. military has begun to rethink its traditional connection to Confederate Army symbols as well. The Navy’s top admiral announced Tuesday that he will follow the example of the Marine Corps, which directed commanders to remove public displays of the Confederate flag.

Defense Secretary Mark Esper and Army Secretary Ryan McCarthy, both former Army officers, said they’re "open to a bipartisan discussion" of renaming Army bases such as North Carolina's Fort Bragg that honor Confederate officers who led the fight against the Union and directly or implicitly defended the institution of slavery.

However, President Trump rejected the idea of removing Confederate names from Army bases on Wednesday after top Pentagon officials expressed openness to the idea.

Gov. Kristi Noem spoke out about counter-protesters who have shown up at Black Lives Matter protests in Rapid City  with the Confederate flag and said on June 3 that they are “disappointing to see.”

Gettysburg Mayor Bill Wuttke said he will not remove the flag from the logo on police cars, buildings or uniforms and maintains it represents history.

The patch, which shows the American and Confederate flags overlapping and a cannon to represent the battle that the town was named for, was created in 2009 by Scott Barksdale, a South Carolinan, after he learned of the history of the town from then Chief of Police Gayle Kludt.

“This patch has no racist intentions; it is meant to be another way that we, as a city, represent our heritage,” states a 2015 post on the city’s Facebook page.

Bill Wainman, the police chief of Gettysburg in 2015, resigned a few weeks after the controversy boiled over, moving to the Hot Springs Police Department where he now works as the captain.

Gettysburg Police Chief Dave Mogard, who has been with the two-person department since 2008, declined to comment when contacted by the Journal.

Wuttke, who has been mayor since 2012 and was a city councilman before that, said he was born and raised in South Dakota and doesn't have any family members who served in the Civil War or fought for the Confederacy.

The town, he said, was founded in 1883 by veterans from both the Confederate and Union sides of the Civil War.

A historian from the Dakota Sunset Museum, Mary Carol Potts, said her records show only one Confederate soldier homesteaded in Gettysburg: William Epling.

Potts said a book in the museum that details Civil War veterans who settled in Potter County has about 40 pages of names of Union soldiers.

A Rapid City Journal columnist wrote in 2011 that the town was founded by 200 Civil War veterans, the majority of them Union soldiers, and that many of their descendants still lived there.

Wuttke said he’s worried that people will tear down the Civil War memorial in front of the Potter County Courthouse if any future protests ensue.

“If we change that patch are they going to come after us next to change our memorial?” Wuttke said. “Up until the last four years, it hasn’t been an issue. Do we not have our right to be able to display what we feel is our freedom?”

He also said no one in his community has ever complained about the logo to him. The 2015 post explaining the decision to keep the flag on the logo has more than 14,000 likes.

Media attention of the patch was sparked in 2015 following the massacre of nine people by a white man at a historically black church in Charleston, South Carolina. The shooter had posted photos of himself online displaying the Confederate flag.

Hart first spoke out about the patch in 2015 to local media sources.

“The battle wasn’t fought in South Dakota,” Hart said. The Confederate flag “is a symbol of hate."

Two posts went up on the Gettysburg Police Department’s Facebook page in 24 hours: One was a new profile picture, one was taken down within an…

A small-town police officer has been cleared after firing her gun twice in 104 days. The officer, who has spoken out against the killing of Ge… 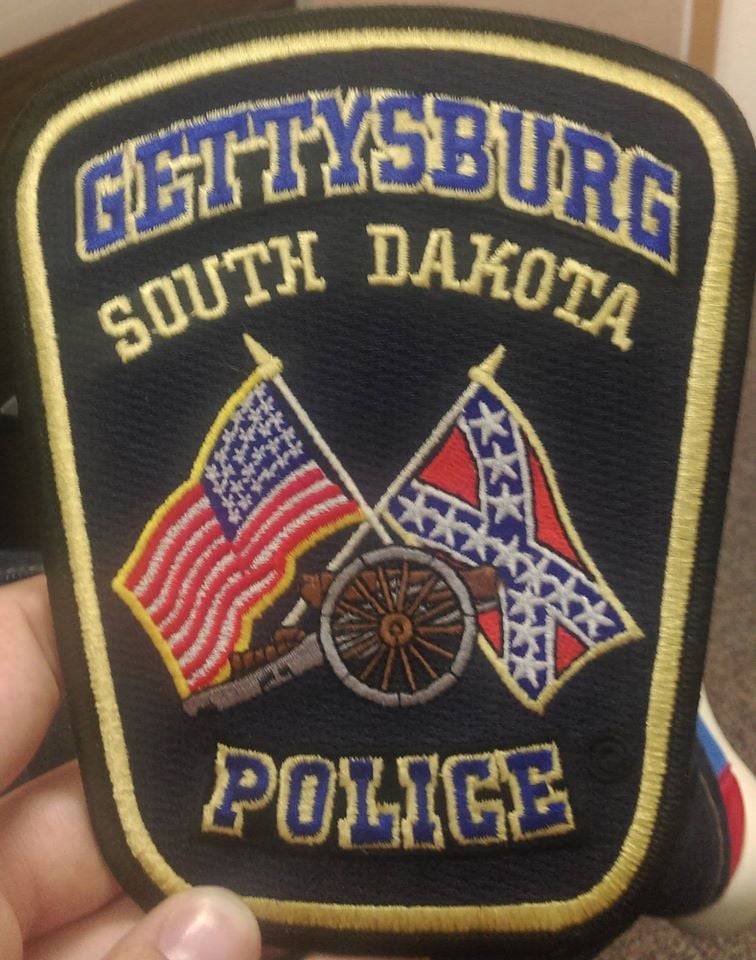 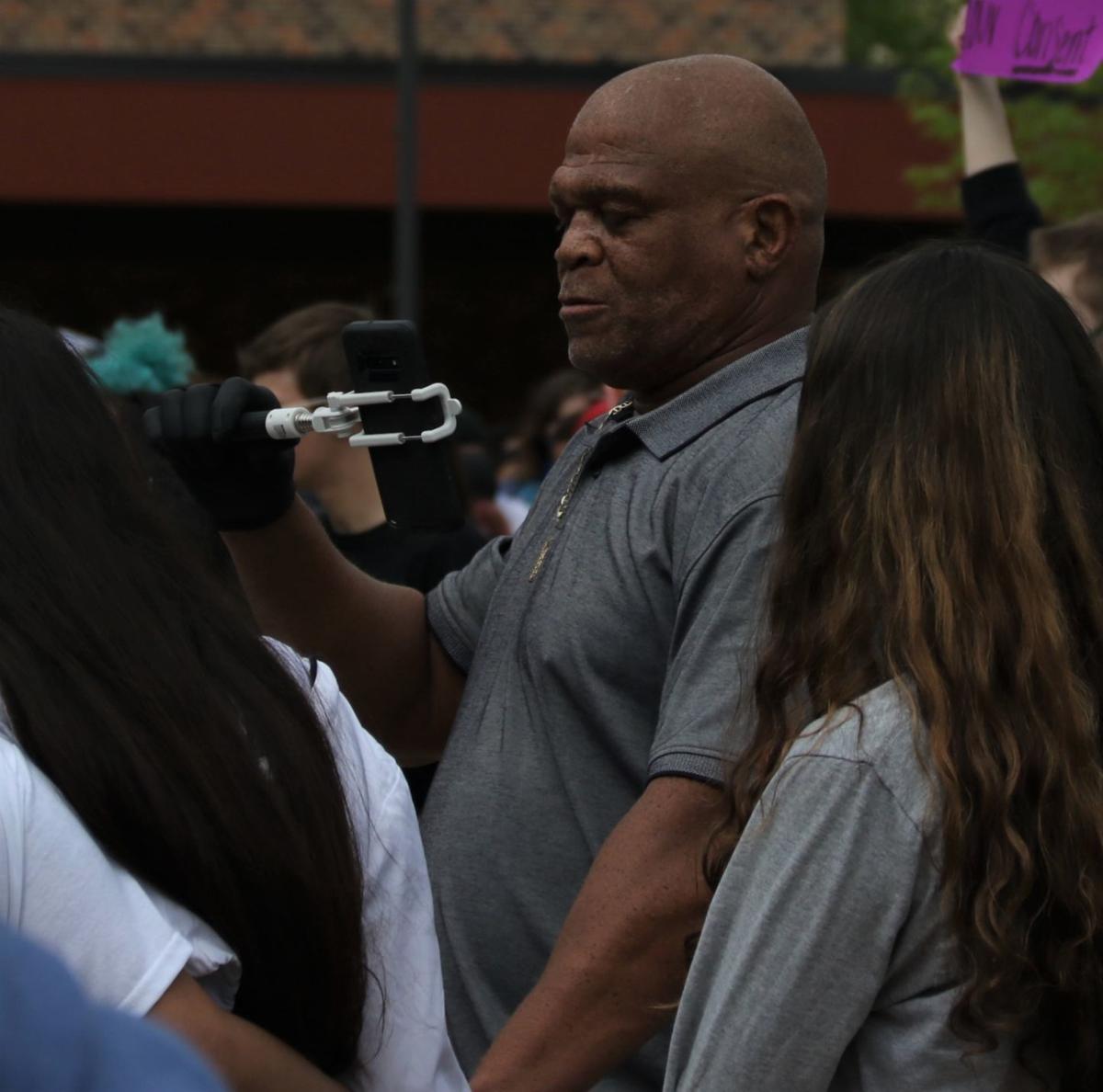 Selwyn Jones, George Floyd's uncle, holds his phone up during a prayer following a walk commemorating his nephew on May 30 in Memorial Park in Rapid City. 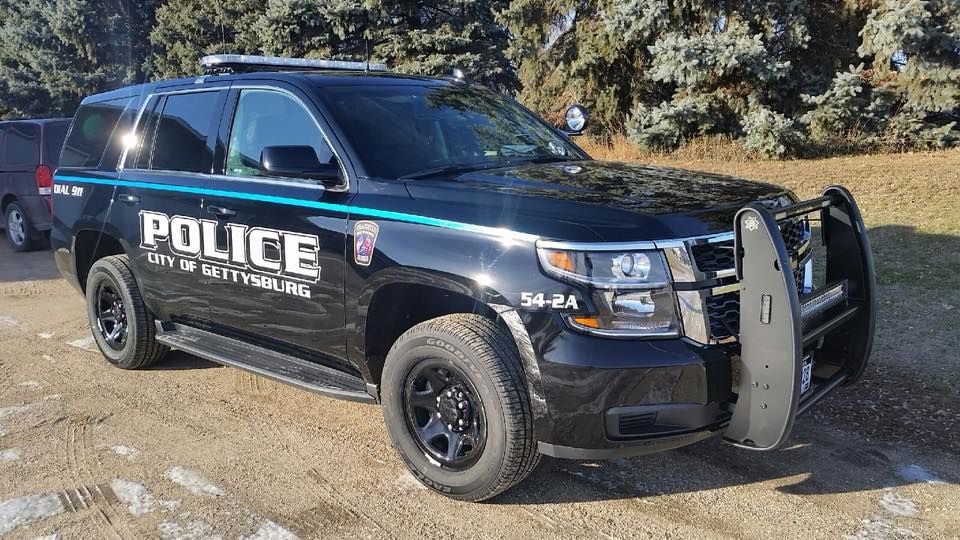 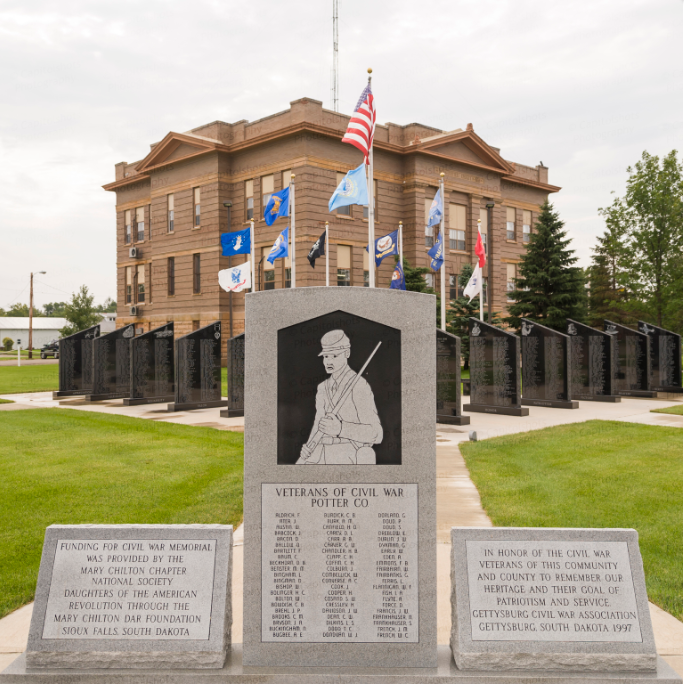 The Civil War memorial outside the Potter County Courthouse.