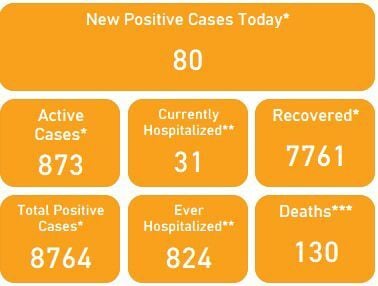 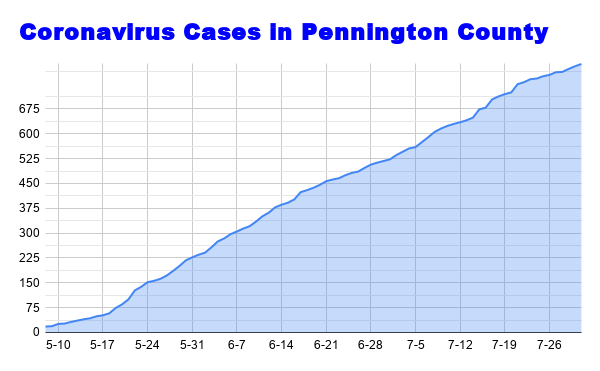 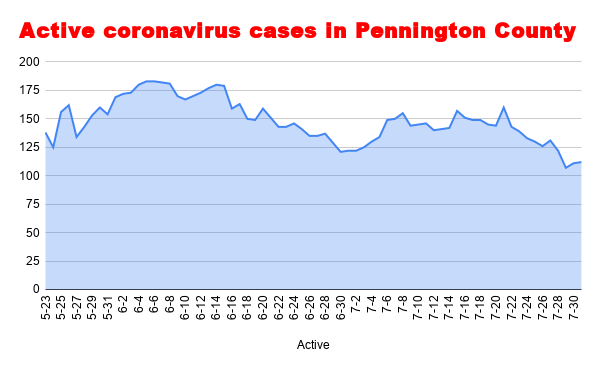 A Pennington County woman in her 80s became the 27th county resident and 130th South Dakotan to die from COVID-19 illness.

The county reported seven new cases of coronavirus on Friday. There have been a total of 811 positive tests and 112 of those remain active infections — up one from Thursday. There were 111 tests processed for Pennington County for Friday's report.

South Dakota reported 80 new cases on 1,290 tests on Friday. The number of active cases increased by seven to 873. The total number of people hospitalized for COVID-19 illnesses dropped from 44 on Thursday to 31 Friday. Ten are in the Monument Health system.

Custer County saw an increase of five cases on 15 tests on Friday. That brought the county's total number of infections to 18. Six of those infections are still active. Meade County reported two new cases on 27 tests. Oglala-Lakota reported one new case on nine tests.

Butte, Lawrence and Fall River counties all reported no new cases on a combined 48 tests.

COVID-19 cases among out-of-staters at Sturgis rally will be difficult to track, DOH says

A smaller number of new cases led to a drop in active cases and hospitalizations in Tuesday's South Dakota Department of Health report.

COVID-19 another concern as Monument Health prepares for rally

The 80th annual Sturgis Motorcycle Rally is bringing hundreds of thousands of visitors to the Black Hills, making it perhaps the largest event…

The South Dakota Department of Health reported the first death from Davison County on Wednesday. A man in his 70s became the 137th state resid…