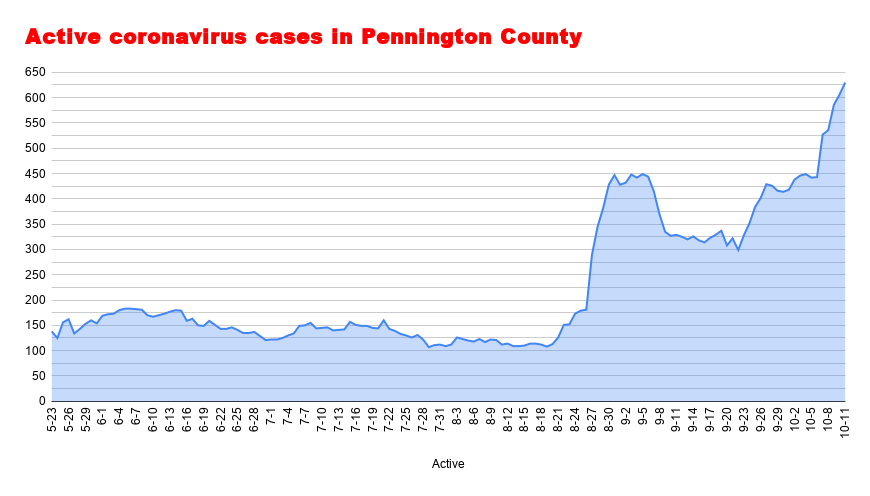 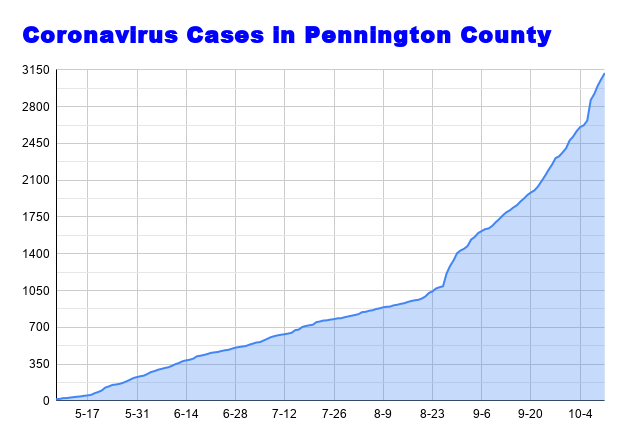 The number of cases and active cases of COVID-19 illness continue to climb in South Dakota according to the daily report from the Department of Health.

The state reported 617 new cases on 1,627 tests for a positivity rate of 37.9%. The total number of cases in South Dakota increased to 28,564 with 5,865 of those considered active infections - an increase of 332 from Saturday's active case count.

There were no new deaths reported Sunday, however, deaths are reported when the Department of Health receives the death certificate, not the day a death occurs. There were 37 people admitted to hospital care on Saturday but 38 were released for a net decrease of one to 266 currently in hospitals across the state. The Monument Health system was treating 44 of those as of Saturday's report.

Pennington County reported 58 new cases on 312 tests Sunday. That brings the county's total number of positive tests to 3,121 with 630 of those cases still listed as active infections - up 24 from Saturday.

There were 78 new cases in patients over 70 Sunday. Children under 10 made up 16 of the positive cases and there were 58 in children between 10-19. Patients in their 20s were responsible for 112 positive tests Sunday.

South Dakota has reached 100 COVID-19 deaths in October as the Department of Health reported eight more deaths Sunday. There have been a total…

The number of active COVID-19 infections continues to rise as the Department of Health reported Monday that 8,388 cases are considered active.…

The South Dakota Department of Health reported 621 new cases of COVID-19 on Tuesday, pushing the state to a total of 8,441 active cases, a rec…

State reports another 793 COVID-19 cases, including 55 in Pennington County, 26 in Butte County

The Black Hills National Forest announced Friday that Jeff Tomac has been selected to serve as the 23rd Supervisor of the forest.