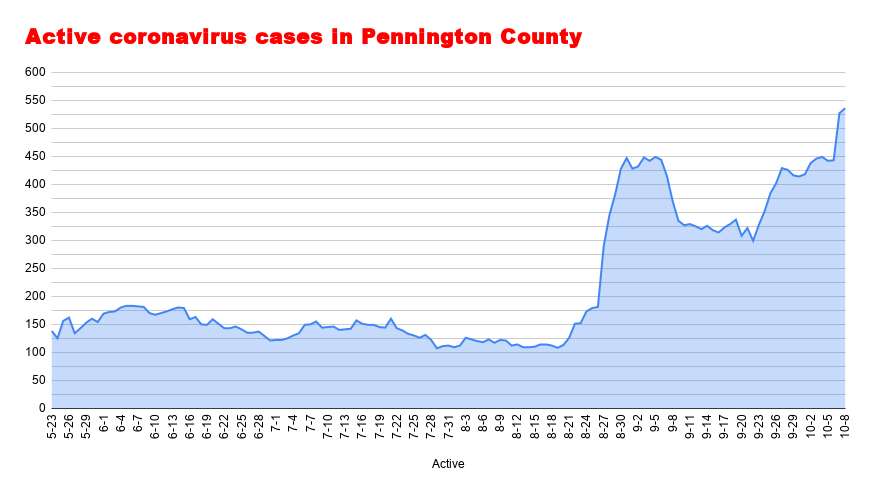 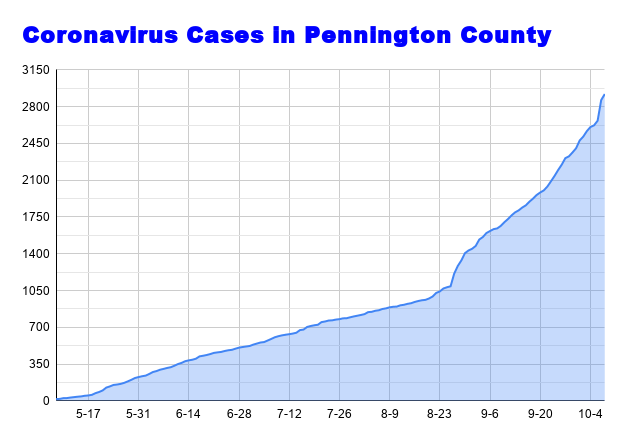 Fourteen COVID-19 deaths were reported Thursday by the state Health Department — the most ever for one day. Those deaths bring the total to 49 in October and the overall total to 272 in South Dakota. Sixty-one people died in September.

The state also set records for the number of active cases, which grew by 162 to 4,673 on Thursday's report, and hospitalizations, which grew by 11 to 284 patients treated in hospitals across the state. The Monument Health system is treating 51 of those patients as of 1:15 p.m. Wednesday.

Thursday's deaths were reported in eight different counties. Minnehaha and Gregory counties each reported three and Lincoln and Turner counties reported two each. Lyman, Jerauld, Bennett and Douglas each reported one new death.

Twelve of those who died were over 80 and two were in their 60s. Eight were women and six were men.

The state reported 536 new positive tests out of 2,511 tests for a positivity rate of 21.3%. There have been 26,441 total cases in South Dakota, which recently surpassed Rhode Island to have the 39th most cases in the country.

The number of hospitalizations was only 78 at the end of August and 212 at the end of September. There are 284 one week into October. Active cases have climbed by more than 1,000 this month, as well.

Eight COVID-19 deaths were reported Thursday to bring the February total to 94 and overall death toll to 1,872 for South Dakota.

Seven COVID-19 deaths reported by the South Dakota Department of Health Friday brought February's total to 101 and the overall total to 1,879.

A Haakon County woman in her 60s was the 1,864th person to die from COVID-19 in South Dakota. Her death was the first reported this week.

The South Dakota Department of Health reported 43 new infections Monday. Of the 108,649 cases since last March, 1,918 are still active.

The South Dakota Department of Health reported only 30 new COVID-19 infections on Monday's daily report. For the first time in many months, Mi…