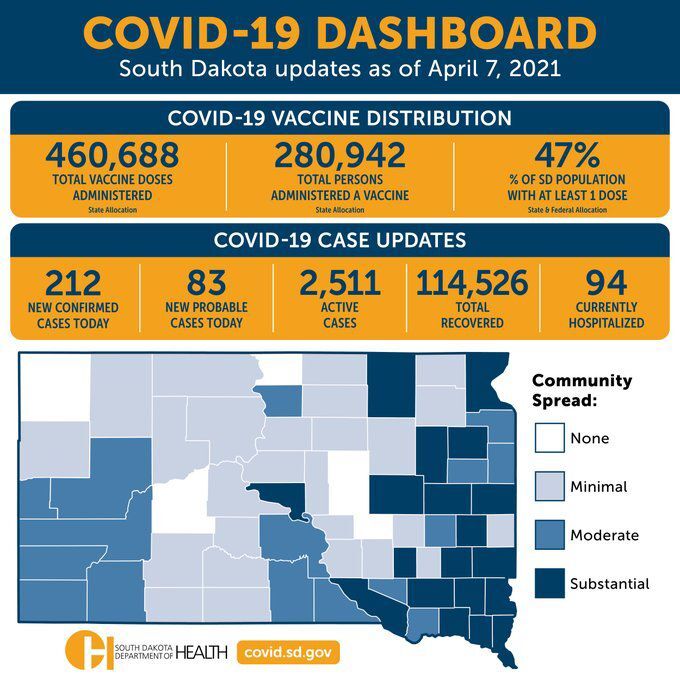 Active cases climbed back above 2,500 in South Dakota when the Department of Health reported 295 new COVID-19 infections Wednesday. Currently, 2,511 of the 118,975 total cases in the state are considered active.

There are 94 people hospitalized across the state but no new deaths have been reported since April 1. There are 17 patients in intensive care units and nine on ventilators. In the Black Hills region, there are six patients being treated for COVID-19 illnesses with one in an ICU.

One new infection each was reported in Clark, Hanson, Miner and Tripp counties.

Sixty-eight of the 295 new cases Wednesday were in children under 19 and 42 were in their 20s. Thirteen people over 70 tested positive.

Five COVID-19 deaths reported Friday by the South Dakota Department of Health brought April's total to 30 and the overall death toll to 1,967.

For the third straight day, the South Dakota Department of Health has reported the death of three state residents due to COVID-19. That brings…

Active COVID-19 cases in South Dakota continue to decline but the number of people being treated in hospitals across the state is increasing.

Tuesday's daily report from the South Dakota Department of Health showed a reversal of fortunes for two Black Hills counties.

A Minnehaha County woman in her 60s became the 25th COVID-19 death in April, according to the daily report of the South Dakota Department of Health.

Active COVID-19 infections in South Dakota dropped to the lowest level since August 27, according to Saturday's daily report from the Departme…