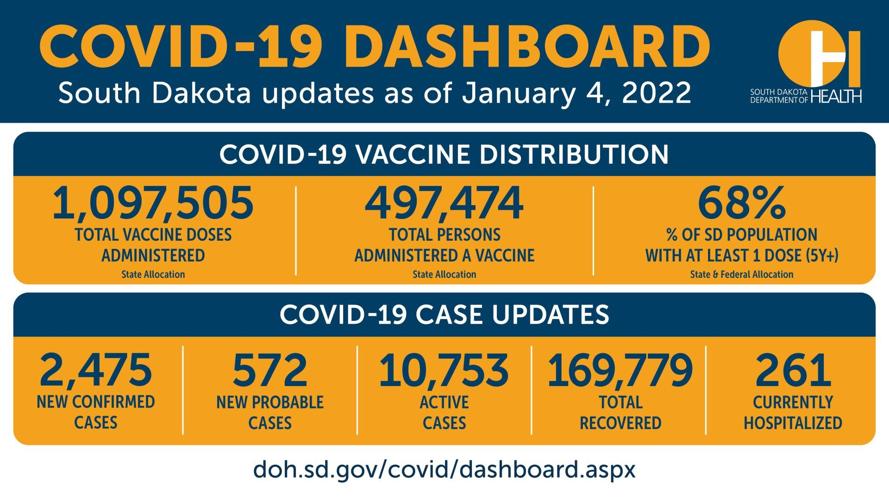 The South Dakota Department of Health reported more than 3,000 new COVID-19 infections from data that was received since Thursday.

The report that spanned all holiday weekend reporting included 3,047 new cases and four additional deaths from COVID-19. The deaths included three women and one man. One was in their 50s, one in their 60s and two were over 80. Deaths were reported in Fall River, Davison, Hutchinson and Lincoln counties.

There have been 2,498 deaths in South Dakota since the pandemic began.

Children under 19 accounted for 530 new infections and 672 were people in their 20s. There were 213 people over 70 who tested positive over the weekend.

Forty-one new infections were recorded in Turner County and there were 35 in Union County. Hughes and Roberts counties each recorded 33 positive tests and there were 29 in Lake County.

There were nine COVID-19 deaths reported by the South Dakota Department of Health on Wednesday.

New and active COVID-19 cases continue to rise in South Dakota, but serious cases and deaths are showing no signs of increasing.

Since hitting a low point in late March, the number of COVID-19 cases each week and active cases in South Dakota have been steadily climbing. …

What can Americans do about far-right extremism?

Watch Now: What will COVID look like this summer?

Watch Now: What will COVID look like this summer?