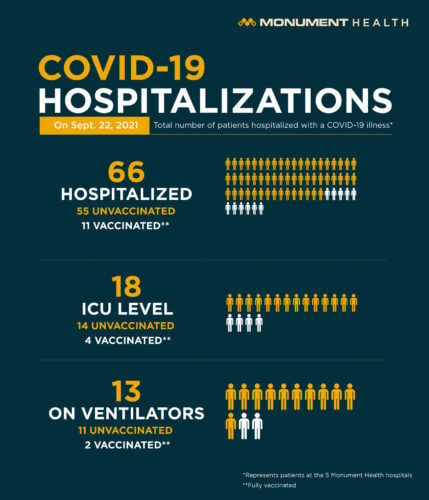 The South Dakota Department of Health reported 383 new infections and four deaths Monday. This data was gathered between Thursday noon and Friday noon. Data from Saturday through Monday is reported on Tuesdays.

The number of active cases in Pennington County and the state continued the slow and steady decline. Pennington County active cases fell from 1,974 to 1,859 and active cases in the state dropped from 7,704 to 7,588. Hospitalizations decreased from 190 to 184. There are 57 people in ICU and 31 on ventilators. The Black Hills region is no longer home to the most hospitalizations in the state. On Friday, there were 72 people hospitalized in the region with 21 in ICU and 15 on ventilators. Sioux Empire hospitals were treating 78 patients.

The deaths reported Monday included one woman and three men. Two were over 70 and two were in their 50s. Deaths were reported in Butte, Lawrence, Oglala-Lakota and Deuel counties.

Brule, Gregory and Hughes counties all reported six new infections and there were five each in Grant, Union and Walworth counties. Lake and Roberts counties reported three positive testseach. There were two new cases each in eight counties and one each in 14 others.

Nine more COVID-19 deaths were reported Thursday. The South Dakota Department of Health reported that four women and five men died. One was in…

The number of active COVID-19 infections increased for the first time in October, according to the daily report from the South Dakota Departme…

The number of people hospitalized for COVID-19 illnesses in South Dakota dropped significantly, according to data released by the Department o…

The South Dakota Department of Health reported 13 COVID-19 deaths in data received between Thursday at noon and Friday at noon.

There have been 2,170 deaths due to the pandemic in South Dakota. The Pennington County death toll rose to 238 - the same number of people who were killed in the flood of 1972.

At least 45 lots in Summerset are likely located in a flood plain, according to the Federal Emergency Management Agency, which is now surveyin…