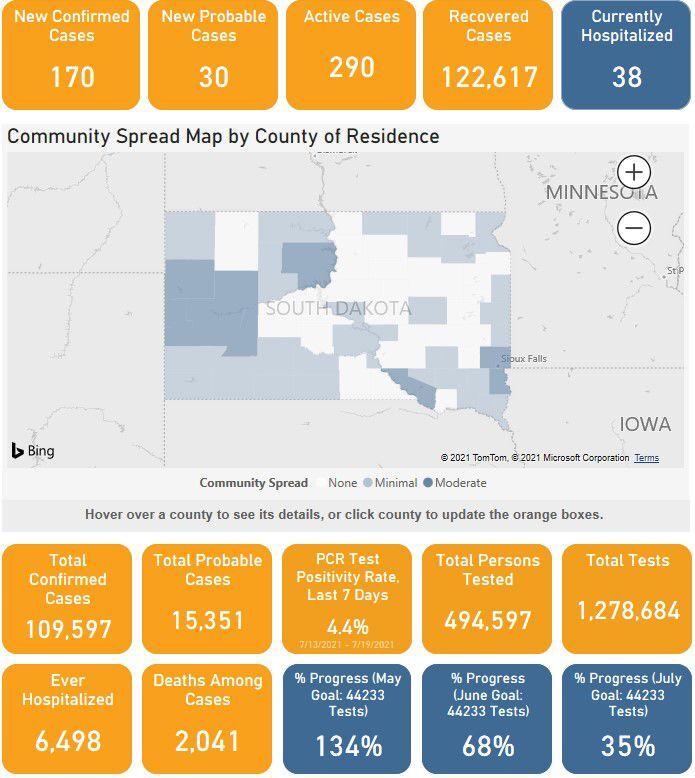 Like most other states, South Dakota is seeing an increase in COVID-19 cases as vaccination rates slow down and people return to more normal activity.

The state Department of Health reports that 352,800 people have received at least one vaccine dose in the state — but only 5,005 of those have been in the month of July. In the past week, the state has recorded 200 new infections. Those new infections pushed active cases up by 82 to 290. That is the highest number of active cases since June 2.

One COVID-19 death was reported this week to bring the total deaths in July to six and the overall pandemic death toll to 2,041. The person who died was a man in his 60s from Pennington County.

The state reported that 38 people are hospitalized in South Dakota due to COVID-19 illnesses — an increase of 18 from last week. Ten of those patients are in intensive care units and two are using ventilators. In the Black Hills region, 10 people are being treated in hospitals with three in ICU and no one using a ventilator.

Only one of the new infections this week was reported to have been a variant of the original COVID-19 virus. It was the delta variant — which spreads more easily than other versions of the virus. There have been 12 delta variant cases reported in South Dakota. The Department of Health has added guidance on its website to advise that variant testing in South Dakota is random "sentinel monitoring" instead of testing all positive specimens.

Forty-two of the 200 new infections were in children under 19. Twenty-eight more were people in their 20s. Fifteen people over 70 tested positive this week.

Minnehaha County led the state with 46 new infections and Pennington County had 38. There are 65 active cases in Pennington County — an increase of five from last week. Meade and Lawrence counties each reported nine new cases and there were five in Oglala-Lakota County. Fall River County reported three new cases. There were two positive tests in Butte County and one in Custer County.

Italy's firefighters battle to tackle wildfires on the Adriatic coast

Italy's firefighters battle to tackle wildfires on the Adriatic coast

Fewer than 50% vaccinated for COVID-19 in county, official says

Pennington County lags behind the statewide average in COVID-19 vaccinations, according to a county official.

Increases in new infections raised the number of active COVID-19 cases in South Dakota to the highest levels since May.

State reports increase in cases of the COVID-19 Delta variant

With the effects of the pandemic waning in the state, the South Dakota Department of Health has transitioned to weekly reports released each W…