The South Dakota Department of Health reported 147 new COVID-19 cases and six deaths due to the disease. The number of active cases fell below 2,000 Saturday for the first time since August.

The deaths included three women and three men. Three were over 70, but one was in their 30s, one in their 40s and one in their 60s. Two deaths were recorded in Oglala-Lakota County and one in Brown, Charles Mix, Dewey and Turner counties.

The 147 positive tests brought the state's total to 111,165 with 1,997 of those still active. There are 95 patients being treated for COVID-19 illnesses in hospitals across the state. Seventeen of those are in intensive care units and nine are using ventilators. In the Black Hills region, there are 14 people being treated in hospitals with no one in ICU or on a ventilator.

Meade County recorded four positive tests and there were two in Lawrence, Butte and Custer counties. No new cases were reported in Oglala-Lakota or Fall River counties.

Lincoln County reported 11 new cases and there were eight in Hughes County. Five positive tests were recorded in Brookings, Codington, Roberts, Union and Yankton counties and four in Brown and Lake counties.

One new case was recorded in Bennett, Day, Spink, Walworth and Ziebach counties.

Thirty five of the 147 cases reported Saturday were in children under 19 and 10 people over 70 tested positive.

Active COVID-19 illnesses and hospitalizations are inching higher, according to the daily report by the South Dakota Department of Health.

The South Dakota Department of Health reported 182 new COVID-19 infections Tuesday to bring the number of active cases to 1,975 — an increase …

Active COVID-19 cases up 10% this week in the state

The South Dakota Department of Health reported 43 new infections Monday. Of the 108,649 cases since last March, 1,918 are still active. 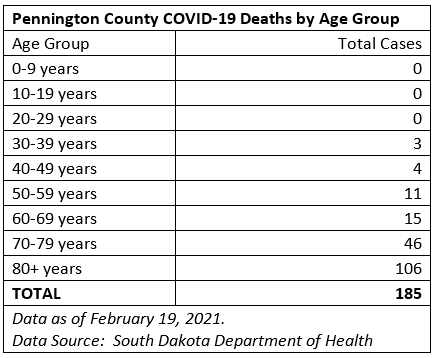