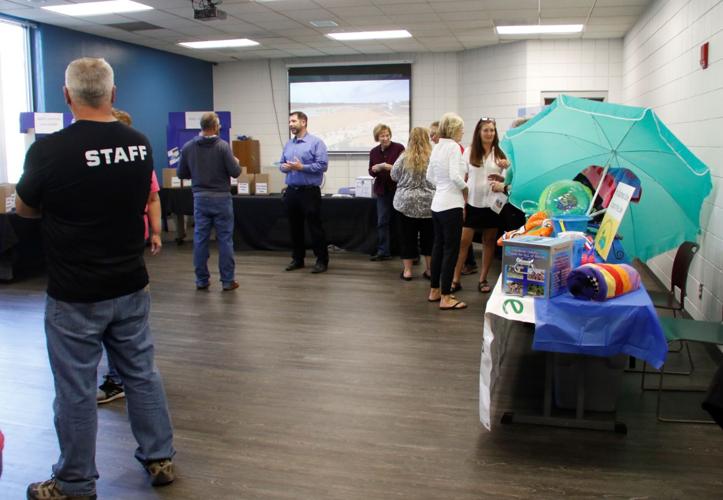 Sturgis community members discuss the proposed Sturgis Adventure Park and amenities they would like to see added to it in the design phase Tuesday night at the Sturgis Community Center. 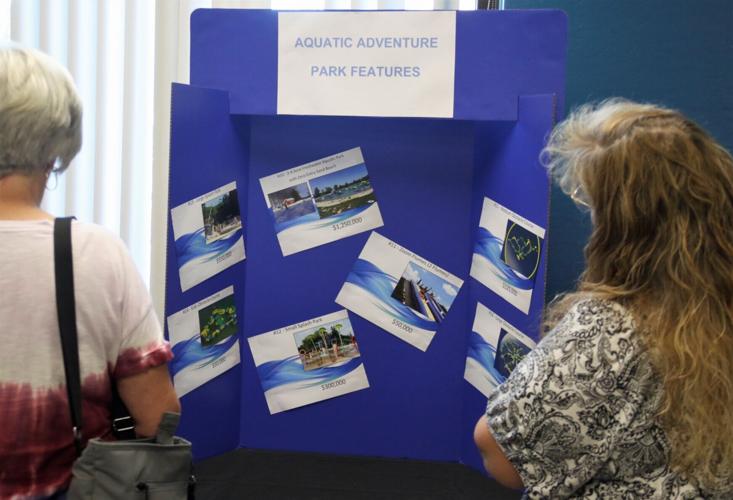 Members of the Sturgis community look at a board with aquatic adventure park features that could be added to the Sturgis Adventure Park.

STURGIS — Community members had to decide how to allocate money provided to them by city staff members for the proposed adventure park in Sturgis Tuesday night.

The city hosted its first of two public meetings seeking input on the proposed Sturgis Adventure Park, which would include commercial and residential development. The park itself could include an outdoor water park, sand beach, splash pad and a playground.

During the two-hour public meeting, community members could come in, put “money” toward amenities including a large splash park, a kids obstacle course, winter sled hill, pickleball, an outdoor pool and more. They could also leave comments in a suggestion box.

City Manager Daniel Ainslie said the idea for the park really began when the city wanted to build a splash park about three years ago.

“The city had a meeting where we laid out three or four different options… and it was very apparent that people wanted more than a splash pad,” he said.

The city asked people to apply to be part of a citizen committee. All who applied were appointed members of the Sturgis Lakeside Adventure Park Committee and researched and raised funds to get to where the park is today. The group has raised over $400,000 in donations for the park.

Ainslie said building the park would bring additional jobs. He also said if the council approves the park, they’ll have to decide what amenities, once designed, would be free and which would be paid.

The current total anticipated cost of construction is $5.5 million. The project would not be funded through taxes or utility surcharges. In addition to the money donated and the $200,000 set aside in the Capital Improvement Fund, the rest of the funding would come from a Tax Increment Finance District formed around the homes and commercial areas.

The city chose KTM Designs to build the housing project. Kyle Treloar, former president of the company and current director of development for Sirius Realty, said housing would be built along Junction Avenue toward Vanocker Canyon.

Treloar said the housing development would add some new roads and create premium housing lots. He said these homes would not be affordable homes but would be on the higher end of the market.

He said there would be town home options near the entrance of the park that would be on the more affordable range.

Council member Aaron Jordan said the park is a great opportunity for Sturgis and could generate a lot of tourism and some economic development. He said there’s hope for more restaurants and other commercial development.

If the council approves the adventure park project, the goal for the groundbreaking is spring 2023 with operations beginning in summer 2024.

For the first time in two years, the Black Hills Powwow will return to The Monument in Rapid City next weekend with a couple of changes.

Your Two Cents for Sept. 30

Just now, Governor Noem says she promises to repeal the grocery tax if reelected. She did not support the Democratic proposal to reduce the gr…

Your Two Cents for Oct. 5

Gov. Noem’s opponent in 2018, liberal Billie Sutton was doing quite well until he advanced implementation of a state income tax. The current l…

Sturgis community members discuss the proposed Sturgis Adventure Park and amenities they would like to see added to it in the design phase Tuesday night at the Sturgis Community Center.

Members of the Sturgis community look at a board with aquatic adventure park features that could be added to the Sturgis Adventure Park.