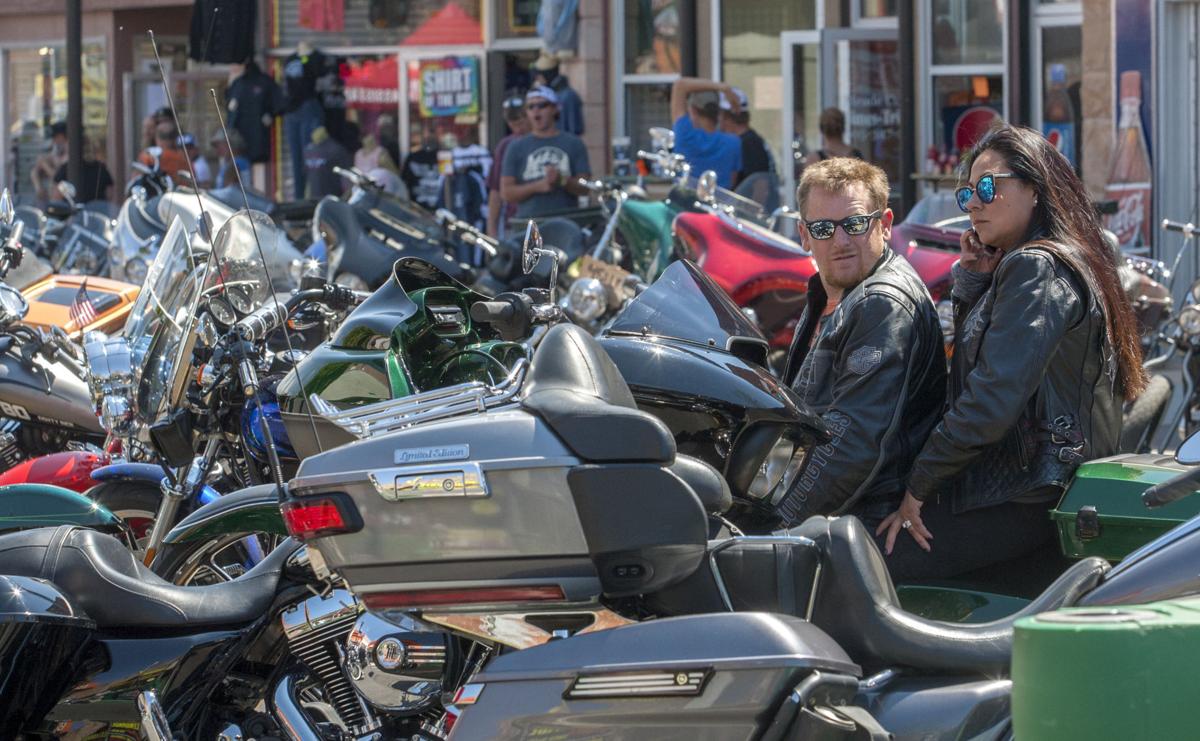 Kyle and Georgina Weese, of Woodward, Okla., arrive on Main Street in downtown Sturgis on Friday. Rally officials hope a youth movement will preserve the future of the rally. 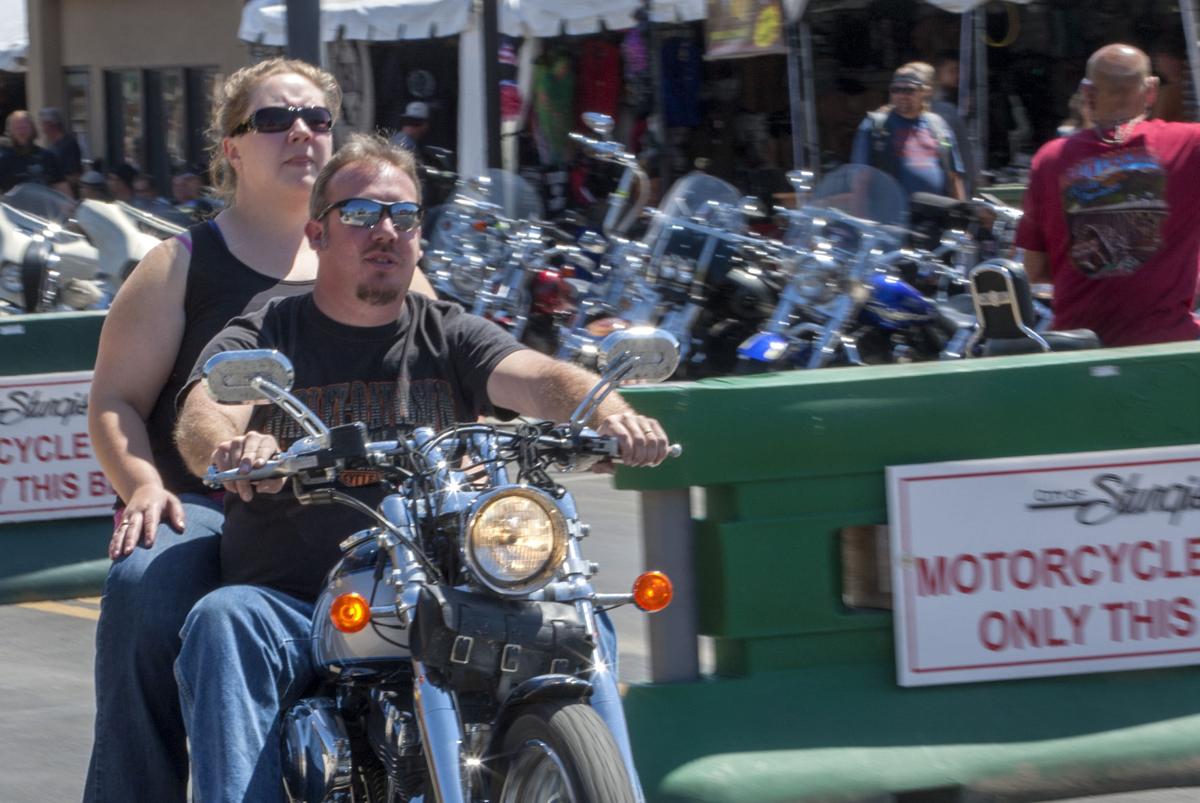 Sarah and Eric Bedney of Belle Fourche ride down Main Street in downtown Sturgis on Friday.

Terry Rymer took a glance at the throng of customers milling about the cavernous showroom at Black Hills Harley-Davidson last week, as crowds of bikers continued to build for the official start of the 77th Sturgis motorcycle rally on Friday.

If, as some have said, the majority of rallygoers are geriatric graybeards who will be coming to Sturgis in ever-dwindling numbers, Rymer isn’t seeing it.

“I'm looking around here, and there’s a lot more people here younger than me than older than me, and I’m 56,” said Rymer, Black Hills Harley’s general manager.

Speculation on the future of the Sturgis rally is an annual rite almost as traditional as the rumble of V-Twin engines in the Black Hills, especially in the wake of the landmark 75th rally in 2015, when nearly 740,000 bikers jammed the region.

Attendance tumbled nearly 40 percent last year, with estimates of the rally crowd at about 400,000. Early estimates for this year's event show a slight uptick is possible.

Rymer attributed last year's drop to the usual dip in attendance coming off landmark years ending in a five or a zero, and factored in economic anxiety over the upcoming presidential election.

Slowdowns in the regional oil and gas industry and low commodity prices in the agriculture sector also played a role in keeping some people away, he said.

“Ag affects everybody,” he said.

But he also believes 2017 will see an upturn in rally attendance with more younger people, often referred to as millennials — those coming of age at the turn of the millennium in 2000 — embracing the sport of motorcycling and coming to the rally.

Rymer said the pull of the rally continues to center on the experience of touring the Black Hills and Badlands on a motorcycle. Western South Dakota and the rally provide a gateway to great scenery and wide-open spaces in Wyoming, Colorado and Montana.

Cole said the rally continues to adapt to a younger crowd with concerts featuring more contemporary bands and events geared toward the younger set during the 10-day run of the rally.

“As much as the younger generation believes that the Sturgis rally is a bunch of old dudes on baggers, that’s not the case,” said Combs.

“Yes, there are a bunch of dudes on baggers (large touring bikes often holding saddlebags), but there are a whole bunch of rad people on choppers and vintage bikes and new bikes and road bikes. There is a diversity to the rally crowd now.”

Combs suggested that maybe 20 years ago, rallygoers who rode anything other than Harley-Davidson motorcycles may have had their bike set on fire.

“It’s not like that anymore. Times have changed,” she said. “We had a chapter turn about 15 years ago, and now it’s time for a new chapter.”

The industry is also expected, sooner than later, to go green with more electric motorcycles. Harley announced last year plans to develop and market an all-electric bike, based on its Livewire concept, within five years, joining existing electrics such as California-based Zero Motorcycles and its line of battery-powered street and dirt bikes.

Yet, even with the new-age innovation, those big full-dresser motorcycles continue to dominate sales.

Indian also offers their Scout line of more inexpensive bikes in a wide range of price points to appeal to younger riders.

“Definitely there’s the middle of the line, there’s the top of the line and there’s entry level bikes. There’s something there for everybody,” Hensley said.

Rymer said sales of three-wheelers, popular with many older riders, continue to be strong, suggesting the rally continues to be a pull even as the population ages. Rymer said Harley will announce new models of bikes, including Sportster models aimed at younger riders, later this month in Los Angeles.

“We haven’t found the stopping point for trikes, even to younger people, because they’re so easy to ride,” Rymer said.

Both Hensley and Rymer said their respective fleets of rental bikes are fully booked for this year’s rally, also suggesting a rebound in attendance.

While the number of bikers coming to the Black Hills may or may not rise to the level of the milestone 75th rally again soon, interest in Sturgis as a motorcycling mecca will rise and fall as the bike industry and the rally adapts to those changing trends.

“We’re going to ebb and flow depending on what we do and what the industry does. Without the industry there would be no rally,” he said.

Hensley said the rally will always have a following. Older generations of bikers have developed a tradition of coming to the rally year-after-year, while younger bikers prefer to vary their experiences, perhaps coming to Sturgis less frequently.

“What the Sturgis motorcycle rally offers to the general public is something no one else does, a very friendly biker community, a beautiful place to ride, the opportunities to see all these vendors that you’d never see,” Hensley said.

“It may be a fluctuating crowd instead of a consistent crowd, but I do believe the rally will be here for ages to come,” she said.

Kyle and Georgina Weese, of Woodward, Okla., arrive on Main Street in downtown Sturgis on Friday. Rally officials hope a youth movement will preserve the future of the rally.

Sarah and Eric Bedney of Belle Fourche ride down Main Street in downtown Sturgis on Friday.