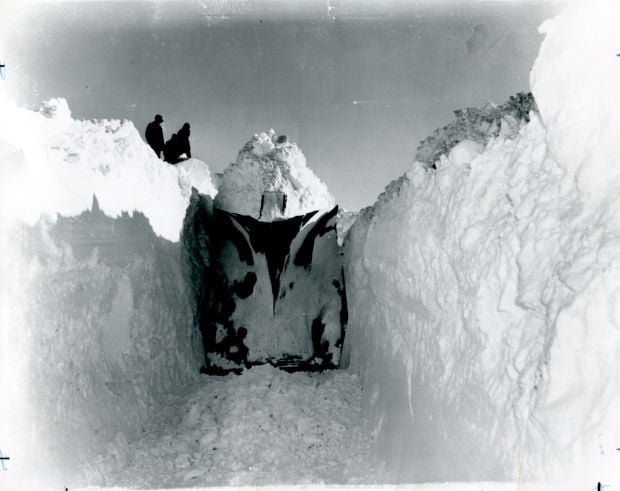 A train engine remains encased in snow despite attempts to free it after the devastating blizzard of 1949. 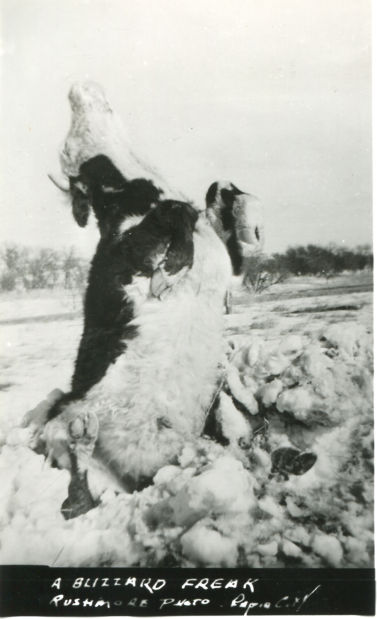 Just like the blizzard of 2013, the storm of 1949 led to the loss of thousands of cattle. Freezing temperatures were the main culprit in the 1949 snowstorm. 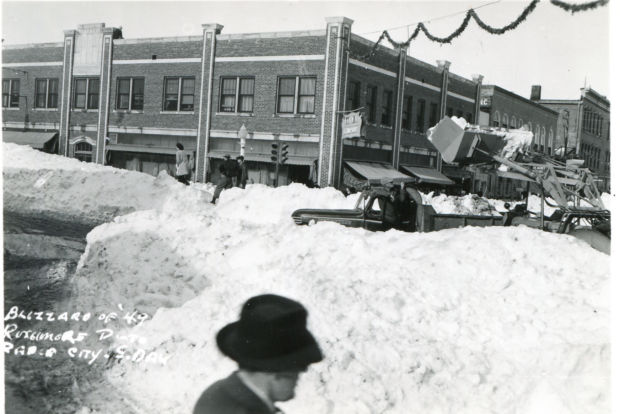 Downtown Rapid City and other municipalities were brought to a transportation standstill during the storm of 1949. 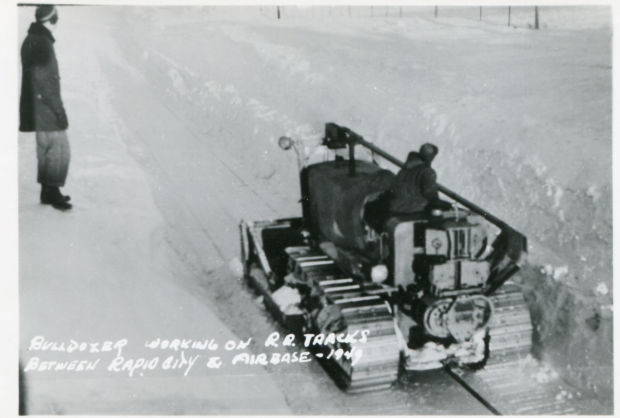 If House Bill 1062 became law this year, a 1949-model snow machine like this one might qualify for a historic specialty plate. 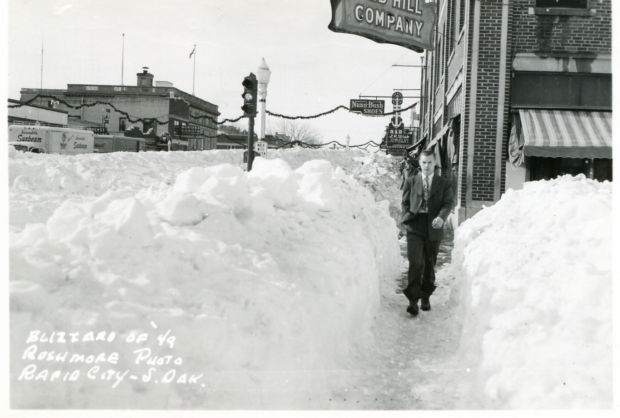 Drifts were said to have reached more than 35 feet in some places after the snowstorm of 1949, which lasted over a month. Drifts were as high as 10 feet in municipalities.

Dwayne Hollibaugh wants anyone who thinks the Blizzard of 2013 was bad to know that it was nothing compared to the infamous snowstorm of 1949.

Now 85, but still tough enough to chew nails, Hollibaugh was 21 and living on a ranch about 35 miles southwest of Chadron, Neb. when the historic storm hit.

That storm, which remains etched in the memory of those who survived it, was far harsher than the latest blizzard because it brought not just snow but also high winds and below-zero temperatures for more than a month. At least three separate major storms struck during January.

"It was hell," Hollibaugh said flatly of the storm that hit on Jan. 2, 1949. "These storms we just had, these people think it was tough. They just don't have any idea what it was like then compared to now."

State records show that the entire state of South Dakota and a large part of Nebraska were affected by the storm. About 24 inches of snow fell in South Dakota that month, winds gusted to 73 mph and temperatures routinely dropped to minus-8.

Some snow drifts reached 35 feet and stretched for thousands of feet, state records say. Trains were snowed in; roads were closed for weeks and some buildings were buried under snow that reached their roofs.

Hollibaugh had to take care of his family's ranch almost by himself because no one could get to him. His family lost about 15 percent of its herd of 200 cattle, mostly due to animals that froze to death.

"We had no electricity, no phone, and I never talked to anyone for 30-some days," he recalled.

Grace Roberts was also stranded in a precarious setting during the 1949 blizzard. Roberts, 95, who now lives in Rapid City, was a schoolteacher in 1949 and was able to get to the North Creighton School where she taught just as the storm turned violent. Creighton was a small town about 25 miles north of Wall that no longer exists.

She and her 4-year-old daughter hitched a ride to the school, and then they became trapped.

"We were marooned in that one-room schoolhouse for 38 days, all through January and into February," she remembered.

Roberts' husband was on the ranch 10 miles away and could not get to her. The one road to her that was plowed a few times during the month would snow over again almost immediately due to high winds and the continued battering of successive storms, Roberts said.

Just like the recent storm, in which neighbors and strangers stepped up to help those in need, Roberts and her daughter were kept alive through their wits, but also with help from people who lived nearby.

"We ate a lot of canned soup," Roberts said. "The closest neighbor was a mile away, and he would ride over on horseback and when his wife baked bread he'd bring us some bread or when he milked a cow, he would bring some milk."

The school had a small bed, and they had coal for a stove to beat back the below-freezing weather. They kept clean by melting snow in a pan and washing with it. They had a small battery-operated radio, but the two mostly spent time talking and reading books. Roberts, then 30, taught some school lessons to her daughter.

"I would read a story to her at night before bed, and eventually she said, 'I can read that now,'" Roberts said. "She learned to read at age four during that storm."

She and her daughter still speak often of the storm and their time together, Roberts said.

"We say, 'I wonder how we survived,'" she said. "And now, this storm we just had, it was bad. But I've told people that I've seen worse."

Jim LeMar of Rapid City remembers that the worst elements of the 1949 storm were the drifting and its longevity.

LeMar, now 73, was a boy growing up in Deadwood when the 1949 storm struck. He said his family home had a balcony that looked out over downtown, but after the storm hit he was able to walk right off the balcony onto solid snow.

The entire region was locked into place because so many roads and rail lines were blocked for weeks, he said.

"We'd no sooner get dug out of one storm and another would hit," LeMar said. He remembers workers from the Homestake mine using dynamite to bust open a snow pile that had stopped up Whitewood Creek.

The length of the storm and its aftermath led federal and state authorities to use planes to drop hay to stranded cattle and packets of yeast onto city streets so people could make bread. Food and clothes were also dropped from planes to people trapped in their cars for days. Dynamite was used to clear railroad lines packed in by several feet of snow.

One woman who called the Journal to share her story but who did not want to be named told a tale of how she was a high school student in Mobridge when the storm hit. She recalled that the Olympian Hiawatha passenger train that ran through town was delayed for days in the city.

"The train stalled, and Sophie Tucker was on it," she said, referring to the singer, comedian and radio personality who was known as "The Last of the Red Hot Mamas."

"She kept everyone entertained for days," the woman said.

View images from Rapid City and Sturgis when a massive blizzard hit the area. This year marks the 70th anniversary of the storm.

A train engine remains encased in snow despite attempts to free it after the devastating blizzard of 1949.

Just like the blizzard of 2013, the storm of 1949 led to the loss of thousands of cattle. Freezing temperatures were the main culprit in the 1949 snowstorm.

Downtown Rapid City and other municipalities were brought to a transportation standstill during the storm of 1949.

If House Bill 1062 became law this year, a 1949-model snow machine like this one might qualify for a historic specialty plate.

Drifts were said to have reached more than 35 feet in some places after the snowstorm of 1949, which lasted over a month. Drifts were as high as 10 feet in municipalities.